We have released a revamp to our new player experience and added numerous quality of life upgrades!

Thanks to diligent feedback from new beta players, and suggestions from our veterans, we have released a big update improving everyone's experience, no matter where they are in the progression!

About a month ago we had an influx of new players, which provided tons of helpful feedback on how to smooth out their experience.

All new players are now given two starting avatars: a dual pistoleer for rapid-fire ranged combat, and a spear and shield avatar for stabby melee combat. This should give brand new players to find an avatar immediately that more closely fits their play style, or better fits the combat situation. Also, dual pistols provides increased firepower over the original starting avatar, with a single pistol.

To give new players more flexibility and strategic options, we have made all item types available to unlock in any order. Fancy yourself an archer? Go head, unlock it first.

Similarly, account upgrades, such as the voxel shop (buy items) and voxel smith (crafting) are now available through unlocks; previously you had to complete campaigns to earn them.

One of the first things players ask is "how do I move faster?" We have now integrated the answer to that question in our tutorial, by giving all new players the sprint trait immediately, instead of requiring an unlock. Similarly, we have made the movement speed modifier immediately available to unlock. Doctore, the trainer of gladiators, will even reward you for using your newfound speed with a pile of voxels. 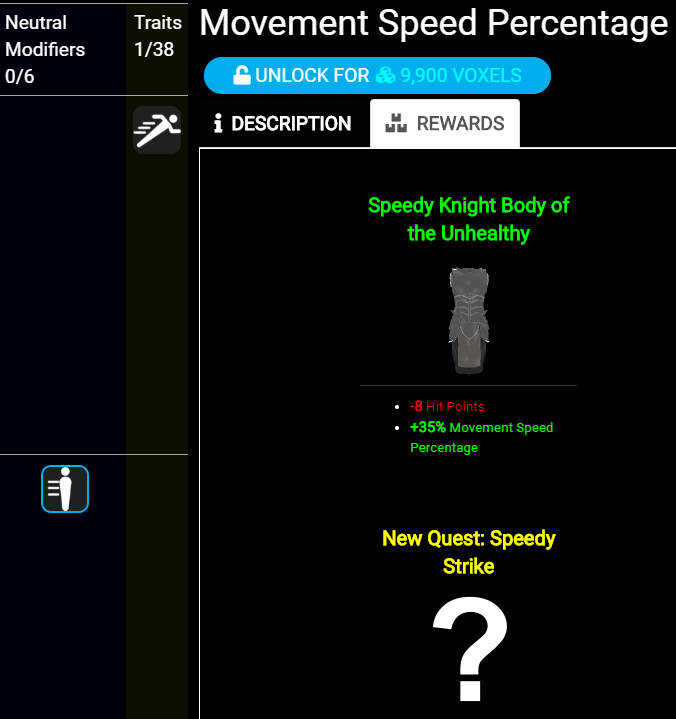 Of course, as with all games nowadays, some omniscient voice needs to explain everything to new players, and for us that comes in the form of Doctore. We have added sixty new phrases to Doctore, finally teaching players how to aim their swing and how to block.

We didn't forget about the veteran players either, with a boat load of quality of life changes. First and foremost, the ability to add new campaigns at any time, but at a cost, to incentivize finishing existing campaigns.

We have also added a bunch of sliders to options for controlling various graphical settings, audio volumes, and controls! Although we had basic options like graphics quality before, these expanded options will allow players to customize their experience precisely, down to the decibel!

One thing that has plagued newcomers and veterans alike is an issue that reduced spear and one hand sword damage. Those have now been buffed, and should be equatable to other weapons available in the roster!

In a similar vein, we have now significantly boosted glory (point) earnings for various actions, such as fighting in melee against a stronger opponent, and knocking opponents off the arena, as seen above!

Some of our veteran players may not like this improvement much, haha, but we have made the AI a bit more aggressive against rangers. No longer can you snipe without punishment!

Last but not least, we worked a lot on smoothing out various networking issues. The game will now attempt to reconnect if a player is disconnected as they join a match, and avatars will no longer "vibrate" around when joining mid-match.

But most importantly, knocked down avatars are now correctly synchronized, so you no longer miss when attempting to hit avatars on the floor! How embarrassing to miss a knocked out target!

Are you ready to join the ranks of gladiators? We are always looking for new beta players! Join our Discord and ask for a key!

Not brave enough for beta? No problem! Wishlist on Steam!

Full patch notes are listed below!