Posted by tryggvienator on Mar 5th, 2013

Two new member have joined the Ceres Team.
A fresh programmer named Þórarinn Heiðar Harðarson. (I pity him, he will have a hell of a time getting into the code I've written like a madman).

An experienced 3D artist. Pavlos Germidis. He will be a great addition to the team. Freeing me from making models and textures so I can concentrate on programming and game development.
Also he has come up with some fresh ideas to add to the game.

I've also added a couple of screenshots to the image gallery. 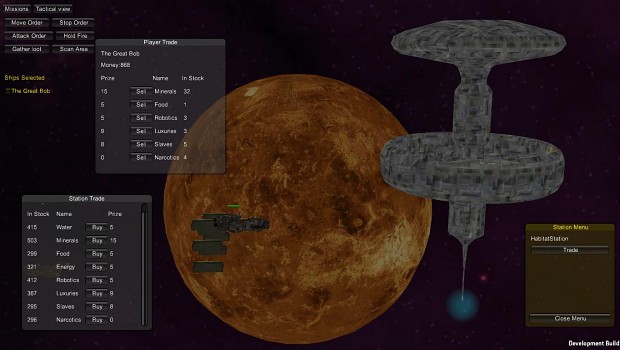 Cyber warfare will be added to the game. It will allow the player to add modules to his ships that allow him to hack into enemy ships. Damage them by overloading his systems, disable the ships or take them over completely for a given time.

Cyber-warfare? Interesting. Are you able to take over systems on their ship or the entire ship? I think this is a pretty cool idea to the battle or espionage dynamics.

The current working function for the hacking includes:
Damage subsystems: Causes a overload in a random subsystem.
Disable subsystems: Causes the subsystem to shut down for some time.
Disable ship: Overloads the ship AI, rendering the ship inoperable.
Control Ship: Hacks the ship AI. Locking out control from ship crew. Ship controlled for a limited time.
Hack into Radar : Hacks into the ship radar. Allows the player to see all that the hacked ship can see.