It’s time to go on a very special road trip. We’re talking about the kind of trip that makes you feel like you’re floating on a cloud, heading down a river filled with cotton balls and puppies. We hope to start this trip off on the right note with the latest patch, entitled "Gravystein". Our team has put a lot of work into engine optimization these past few weeks.

It’s time to go on a very special road trip. We’re talking about the kind of trip that makes you feel like you’re floating on a cloud, heading down a river filled with cotton balls and puppies. We hope to start this trip off on the right note with the latest patch, entitled "Gravystein". Our team has put a lot of work into engine optimization these past few weeks. We want to ensure that The Universim runs as smoothly as possible on machines of all specifications, but it’s still got a ways to go. We restructured a number of internal systems, and we’re happy to see some tremendous progress so far. Along with optimization, we also reworked the animal AI system. That’s right, animals are no longer just a bunch of dimwits wondering about endlessly in the hopes of having the pleasure to navigate around a tree.

Animals now have a fair amount of dependencies and behavior. Surroundings will now also affect animals directly. We implemented a dynamic growth system that will be responsible for managing the animal population on the planet. In the future, this system will allow us to link the animal population to factors such as: the local temperature (some animals will reproduce more during winters and die out during hot summers and vise versa), oxygen levels, and the amount of flora on the planet. Player/Nugget actions will directly affect the planet’s environments, which now includes negative effects on the animal kingdom. Good luck living with yourself once you wipe out a species like the penguins. I bet you don’t even see penguins in the game, you heartless brute. There is still quite a bit of work to do, but we have the main platform in place.

We also redesigned the Priority Panel. Based on your feedback, our goal was to provide you with additional tools to help you keep your Nuggets busy, without the need to constantly open and close the Priority Panel and change things manually. Now you can set the specific amount of workers you want for each task in the panel and the system will try to maintain the workforce as the population changes.

For example, if you currently have two Nuggets assigned as lumberjacks and you want more Nuggets to bolster the ranks as they become available, then all that you need to do is set the total number of lumberjacks you want and the system will assign new workers without pestering you. Please test this system out and let us know your thoughts, especially anything you believe will make it even better.

Next up is the redesigned construction process. Instead of having a fixed construction time per building, each building will now have Health Points. Construction speed will be dependent on a Nugget’s Might from here on. For example, if a building’s has a max HP of 100 and a Nugget’s Might is 10, it will take 10 hits from the Nugget to construct the building. The same thing applies to repairing structures. Everything in The Universim will have HP, and every object that qualifies can be affected by Nuggets based on their Might. 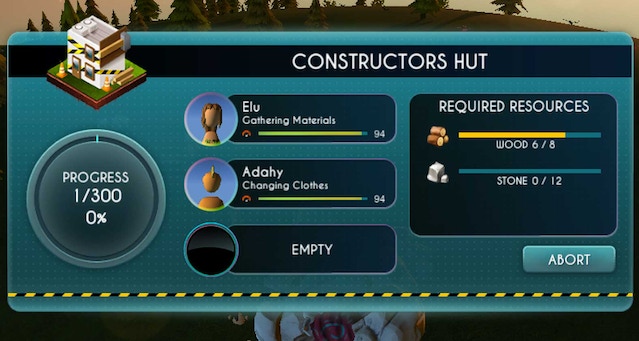 The final addition is something you will all likely be very excited to hear about. We're officially implementing the first Creator Power mechanics. That means we now have some proper physics! The new gravity system affects every object in the game that isn’t nailed down. This will allow us to have planets with varying gravitational forces. Of course, a system like this would be pretty useless without something for you to fool around with. The first power available to you is the ability to pick up and throw stones, trees, and so on.

The team is really spending a lot of time on implementing and polishing the main platform, so as to ensure that we can expand as smoothly as possible in the coming months. As soon as the main features of the Prometheus engine are fully-released and running at the quality we expect, it will be much easier for us to implement new eras and so on. For now, we’re going to continue testing new features and systems in the most stable era, which, ironically, is the Stone Age. You just can’t beat that Paleo diet.