Like an old horcrux seeking new life, the time has come to resurrect CKII: Wizarding World. We're back now stronger than ever and it's time to see this through to the end! 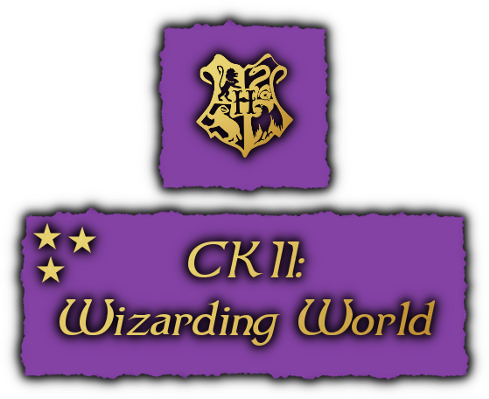 The journey began back in 2015, a vision to create a Crusader Kings II modification set in the world of Harry Potter. Where you could live the life of your favourite characters, become the next chosen one to save the world from evil, or choose a life of power and destruction, diving ever deeper into the pools of darkness to harness the dark arts.

In 2016 the mod was released and received an amazing response from the community. Unfortunately not long after the first release real life hit with some unavoidable obstacles, allowing less and less progress to be made, until development halted all together. Though the dream of developing and finishing the mod never left us, only the timing was never quite right to continue. Now I am happy to say that, that day has finally come, and our excitement is uncontrollable. With all the new features that have been added to Crusader Kings within the last few years, CKII: Wizarding World has the potential to be greater than ever before.

Once again you'll live the life of a witch or wizard and send your children to the greatest wizarding school in the world; Hogwarts School of Witchcraft and Wizardry!

For those we let down all those years ago, please accept our apologies, it was not our intent. Life can throw some rather unkind curveballs, usually at the least opportune of times, which resulted in the

...but we're back now stronger than ever and it's time to see this

through to the end!

Let's breathe some new life into this community!

Support us on: Patreon

My budget allows either Patreoning this or subbing to Spotify.

You're a star! Any support is greatly appreciated and we hope to do you all proud! Tyvm!