A lot of work went behind this version. We've wrapped up things feature-wise and have been focusing on stability, performance and playability. The game is now running smoothly at 60fps even on our lowest target device (iPad mini).

Posted by artindubitably on Sep 6th, 2015

We recently released a Gameplay Teaser and here it is:

A lot of work went behind this version. We've wrapped up things feature-wise and have been focusing on stability, performance and playability. The game is now running smoothly at 60fps even on our lowest target device (iPad mini).

Most of our current levels have been re-worked to have more complex and interesting puzzles and of course we're working on new levels daily. We will be adding more graphical assets and new enemies still, but no more feature creeping is allowed!

A new HUD with optimized graphics and code was constructed recently. The code is completely rewritten to be more flexible and handle notifications better and smoothly. It was a big task and took about two weeks of coding and photoshopping.

The UI batching still causes some problems and transparent elements and tiling sprites seem to slow the UI down a lot especially on Retina. We're hoping to see performance increase in the next Unity release (5.2), but if not, we're going to have to make some changes to the UI and work around the problem areas.

It's finally time to work on these as we need marketing material and dialog faces for the game. There's some test faces rendered for our dialog system, but they're not final. Here's a small sneak peek anyways:

Our dialog conversations are meant to be short and their purpose is to create mood, advance the underlying story and teach the player about various game mechanics.
The text will be animated and characters will have different faces for different sentences to make things more interesting.

A lot more about the characters later, as the work on them is now starting. 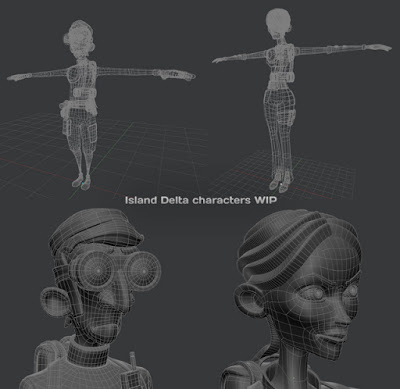 We're releasing Island Delta later this year and we need to get public beta testing going at some point. It can't be too far away since the year is almost over; four months is really really short time as every dev knows! We have to get this game known before that so we get some fan base and testers. That's going to be in our agenda from now among other things.

Anyways, that's it for this post. We hope you enjoyed the video and help spread the word about the game! Thanks for reading!