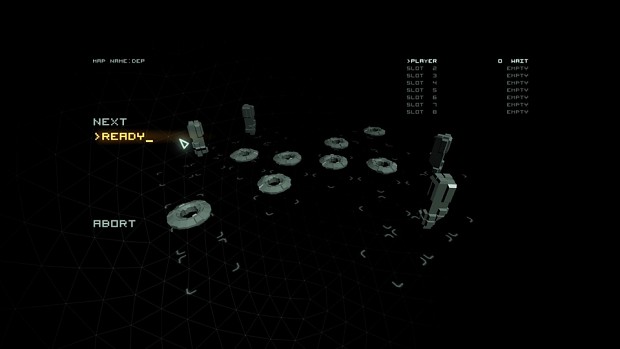 This screen shows the pre-match room, where you can see how many players are connected and a voting system that allows players to chose to play this map (pressing "ready" button) or by chosing another randomly generated map (pressing "next").

The game is a fast and brutal shoot'em up with isometric view above your ship for Microsoft Windows. It's compatible with XP, Vista, 7 and 8. The engine is pretty light, it should run on fairly older hardware, you'll only need Directx 9.0c and a Pixel Sharder 2.0 videocard.

It supports 4vs4 team deathmatches in "Versus" game mode, and 5 vs 5 teamplay in "Battle" game mode. At the moment we don't have yet dedicated servers so you players will be able to host the game directly or to join online sessions from other users.


The controls are very simple: W A S D to trust your ship forward, backwards and to the sides; use your mouse to turn the view and to aim. Left Click of the mouse shoots your main gun, right click activates items that can be gathered during the gameplay. 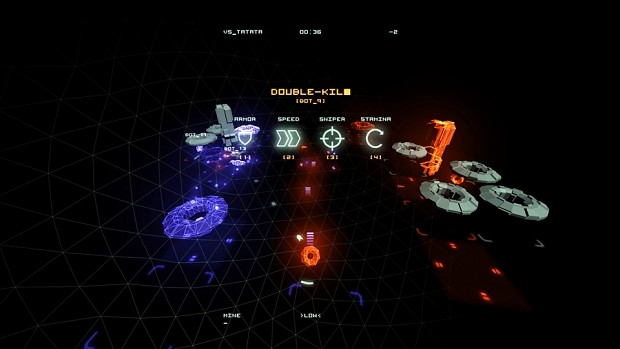 In this screen you can see an advanced phase of the match, where players can select one passive perk for their ship by pressing the corresponding button on their keyboard. There are several ship classes, items (defensive or offensive) and perks that can be unlocked freely during any match and are automatically awarded in waves during the gameplay.


You play as the pilot of a ship in a virtual, randomly generated map.

A circular gauge made of several curved bars surrounds your ship. The bars represent your health and energy for the main gun of your fighter. Shoot too much, your health will deplete and if you get hit you'll die instantly. You'll notice that the bars will deplete accordingly to as much energy you've used.

In order to recharge your ship, you must capture quads. Neutral quads have a greyish colour. To conquer them you need to fly into the quad until it doesn't fill up of the colour of your team (red or blue). Once the quad is fully coloured the recharge time for your ship is greatly increased so that you can shoot for longer time and sustain more damage from incoming enemy fire. 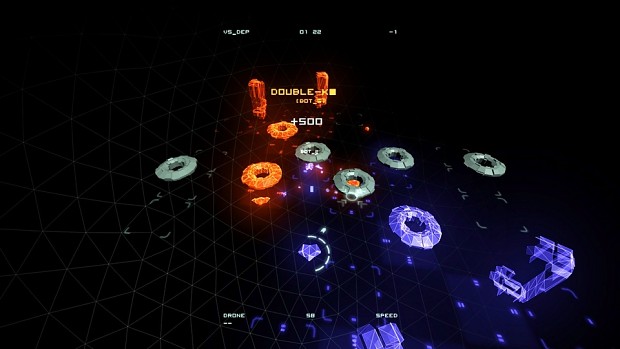 In the above image you can see that team blue ("Alpha") holds two towers (lower part of the image) and a torus. Red team ("Omega") holds the two towers in the higher part of the image and two toruses near the centre of the map. There are five further neutral toruses left to capture. The player is piloting a tank class ship and its energy is more than halved.

The focus of the game is to dominate quads containing structures. There are two kinds of structures, toruses (circular structures) and towers.
-A torus once captured will grant ONE respawn ticket to your team. By this, you will cover the death of a fallen team mate.
-Towers will grant FOUR respawn tickets, so they are very important and you should focus on capturing and holding them as long as possible.

Notice that quads will fall back to neutral state 20 seconds after being captured.
There are bars inside the quads to help you understand when this is going to happen. Fully and freshly captured quads have four bars inside of them, while quads that are becoming neutral, only have one bar.
To gather further tickets or energy for your ship you'll always need to take care of their charge status, or the enemy can get there and capture them if you leave them undefended.

Be aware that we didn't had signed the application yet, so Windows and probably most of the antivirus programs will prompt you that the executable is a virus or a trojan. It's not as far as you download it from IndieDB or ModDB direct link.

Please notice that we're still refining the netcode, so you may find hard to see people connecting to your hosted match or to join other players matches. That's why it's an open beta, we need to refine it!

Head over to the forums to leave your feedback. Otherwise you can keep in touch with us through Twitter and/or Facebook.

We'll soon post tutorials and further instructions how to play the game. In the meantime we hope you'll enjoy the game!