We developed concepts and ideas for the weather system, our character and worked on the look of the hextiles.

We developed some new concepts and ideas in the last two weeks that are gonna shake up the whole mountain! Revising the weather, making a new character and connecting the tiles to make the mountain feel more connected. You can look forward to some awesome new additions.

If you want to support us give us a follow on Twitter and join our Discord. We're happy about every feedback!

Let's dive right into it:

Weather conditions play a major role in climbing. Every single one awaits mountaineers with unique difficulties.
Cold clear weather, gives them the opportunity to see far and plan your next steps, even though they might not reach their desired goal due to the coldness.
Snow(storms) make seeing very hard and can result in a so-called "white-out" for the climber, a weather phenomenon "in which the contours and landmarks in a snow-covered zone become almost indistinguishable." (Wikipedia).
Sunny clear weather may be beautiful and a good opportunity to warm up, but all the reflections caused by the ice and snow are hard to comprehend for the eyes and make seeing far into the distance difficult.
The night is cold and every step could be the last and there might be something lurking in the darkness...

Our goal is to implement these difficulties in the game in the best way possible. Not only gameplay-wise but also visually.
Our artists came up with many different ideas and after evaluating we decided to go with 3 different weather condition concepts that we're implementing into the game. 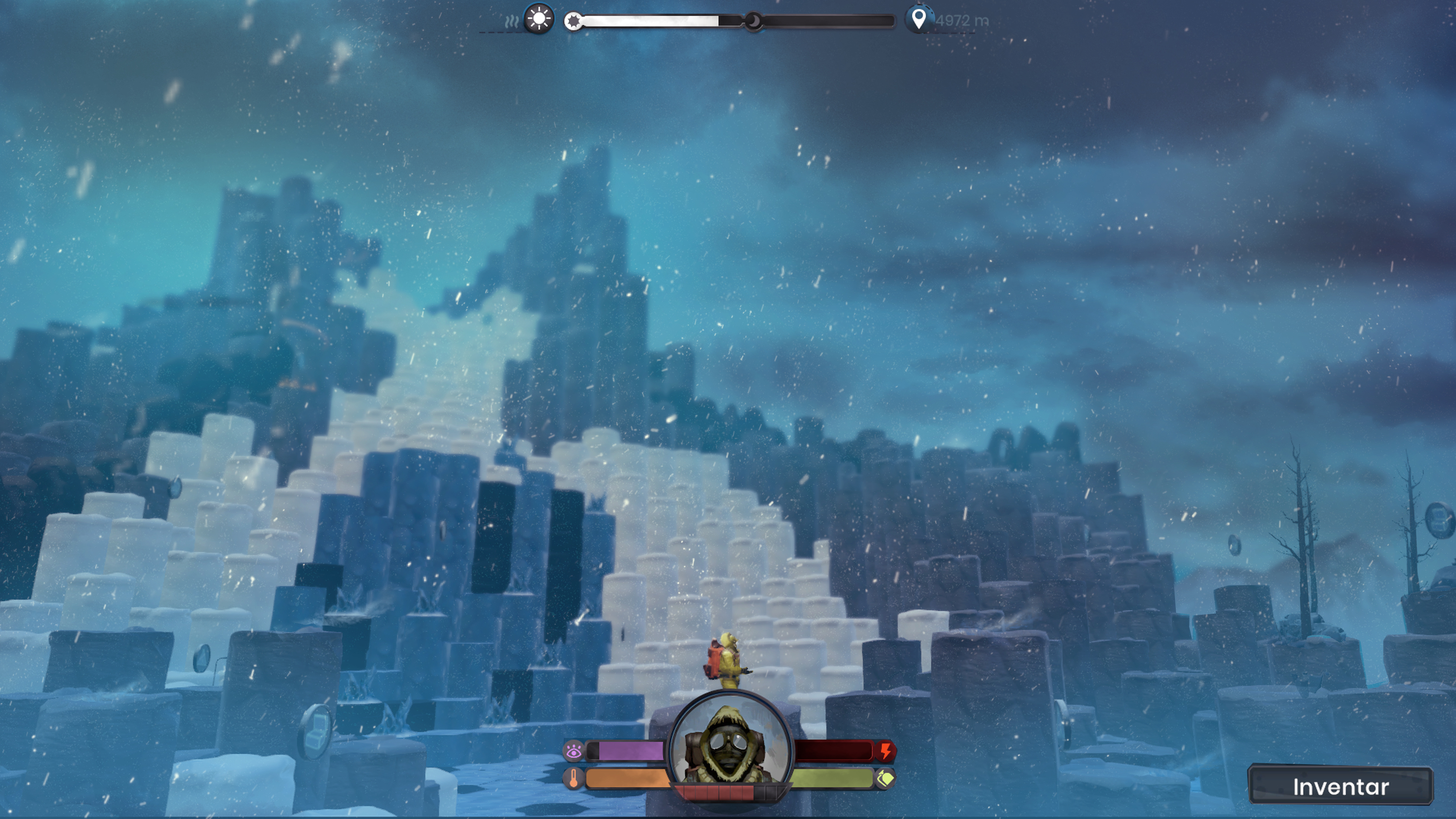 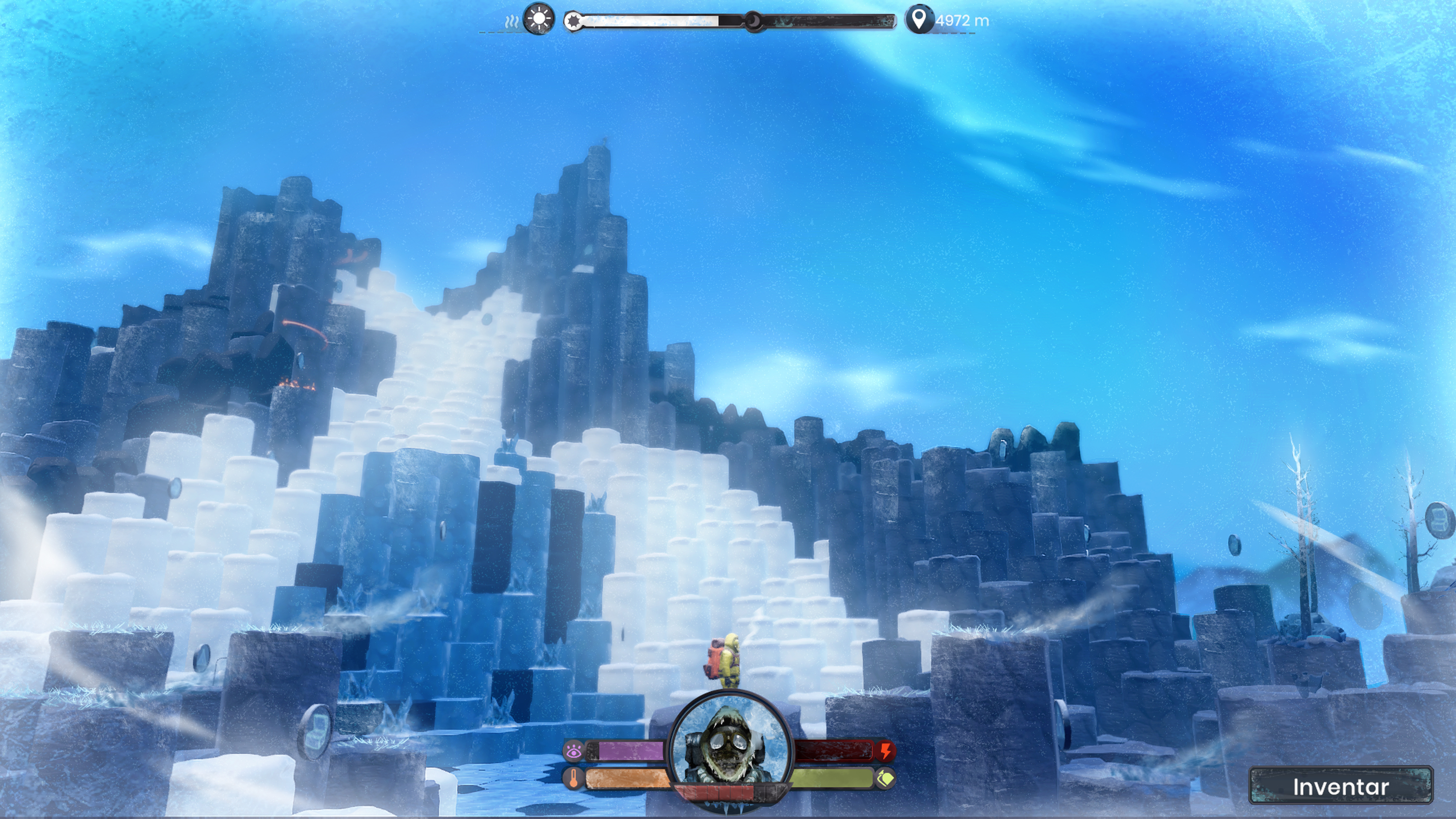 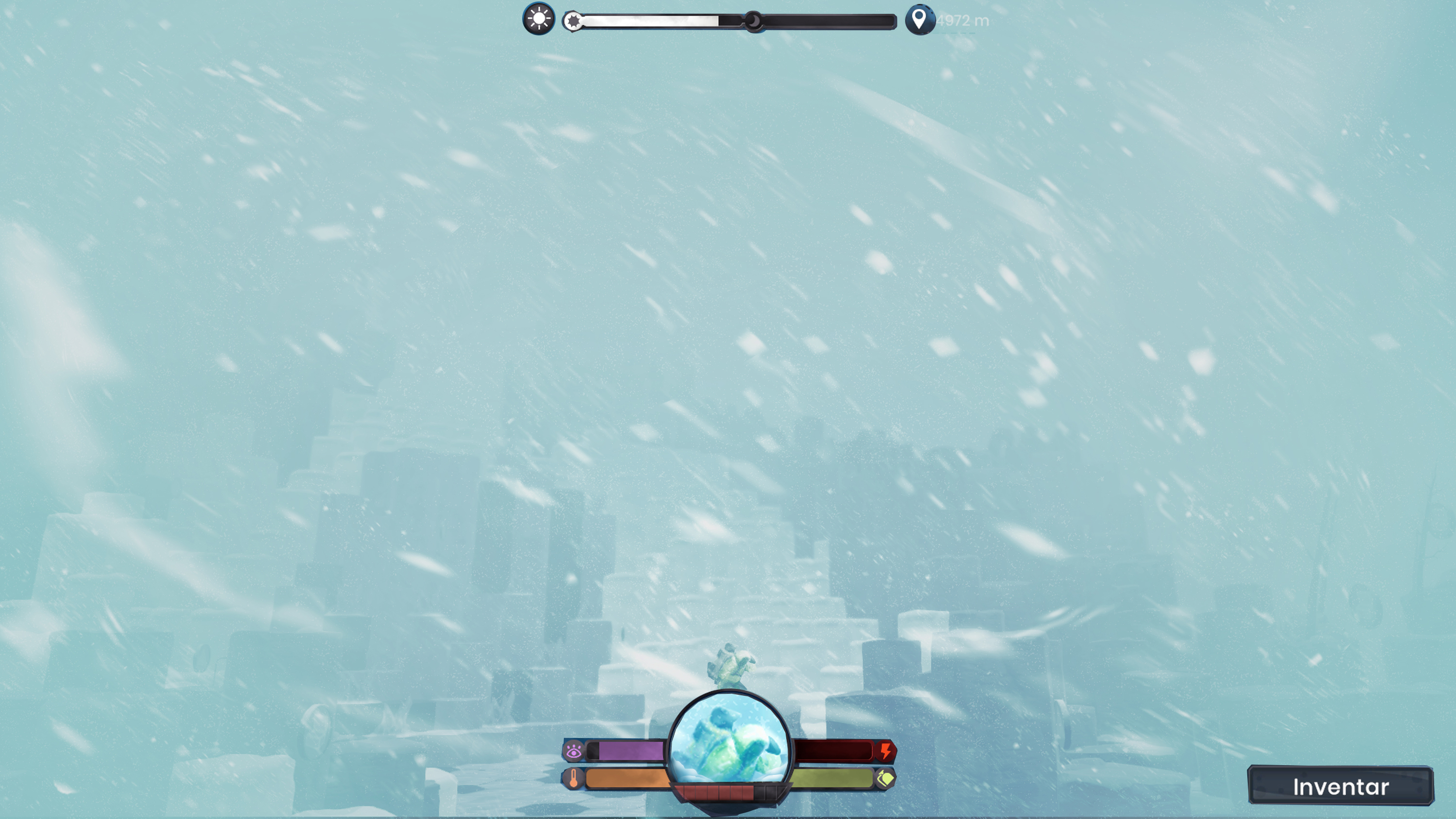 Every single one of these weather conditions brings their own difficulties for the player.
Also, you may have noticed that we're playing with the idea that the HUD changes its looks depending on the weather condition.

The One who overcomes the Insurmountable

Our beloved chubby yellow mountaineer has a new successor (in development).
As much as we learned to love him, it was just a matter of time until he had to go and this time is very soon.
While we're working on the lore and story of our game, it became clear that he just doesn't fit in anymore.
Our goal is to make different characters, all with their own reasons to climb up the mountain and therefore models that represent that. 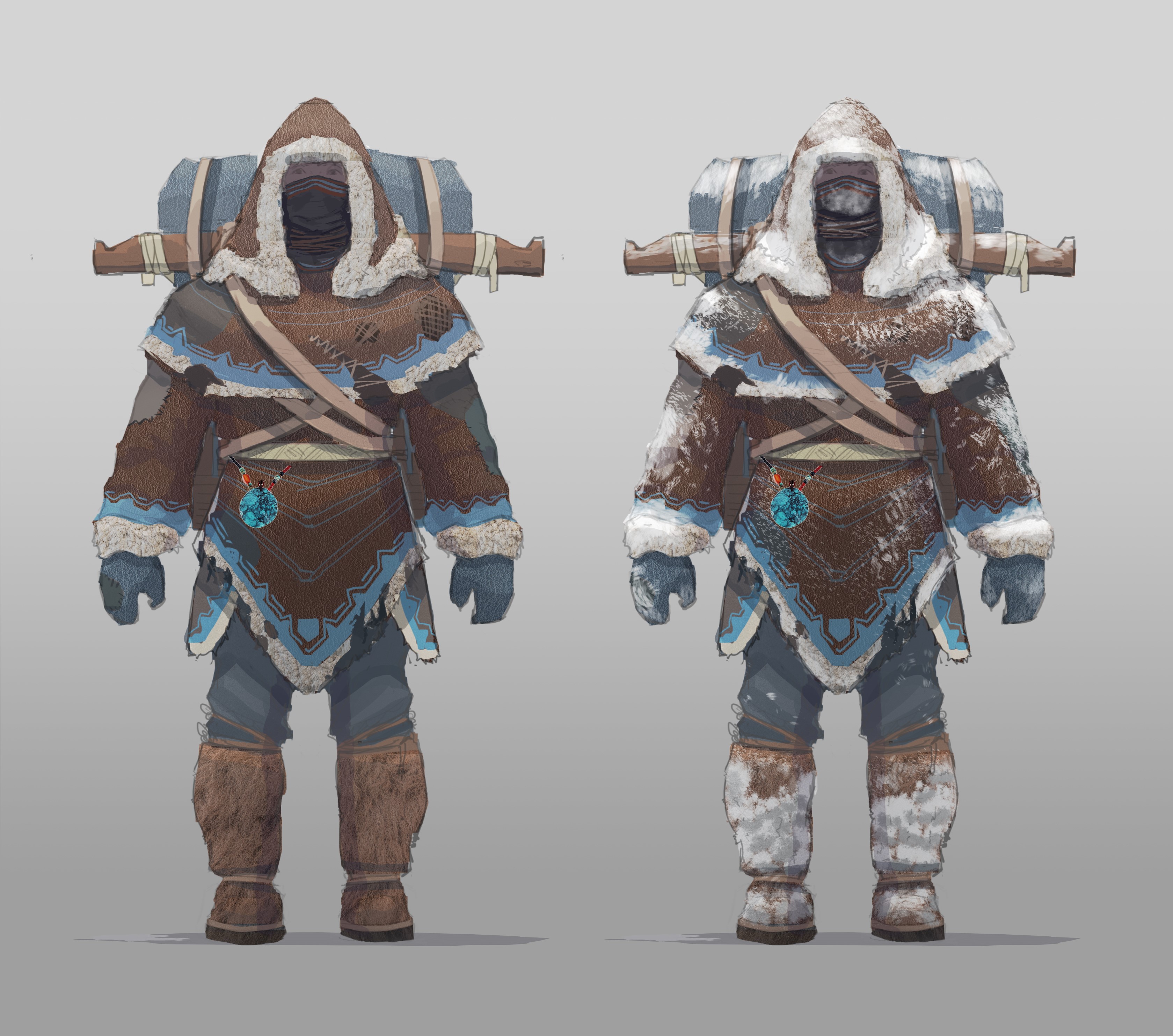 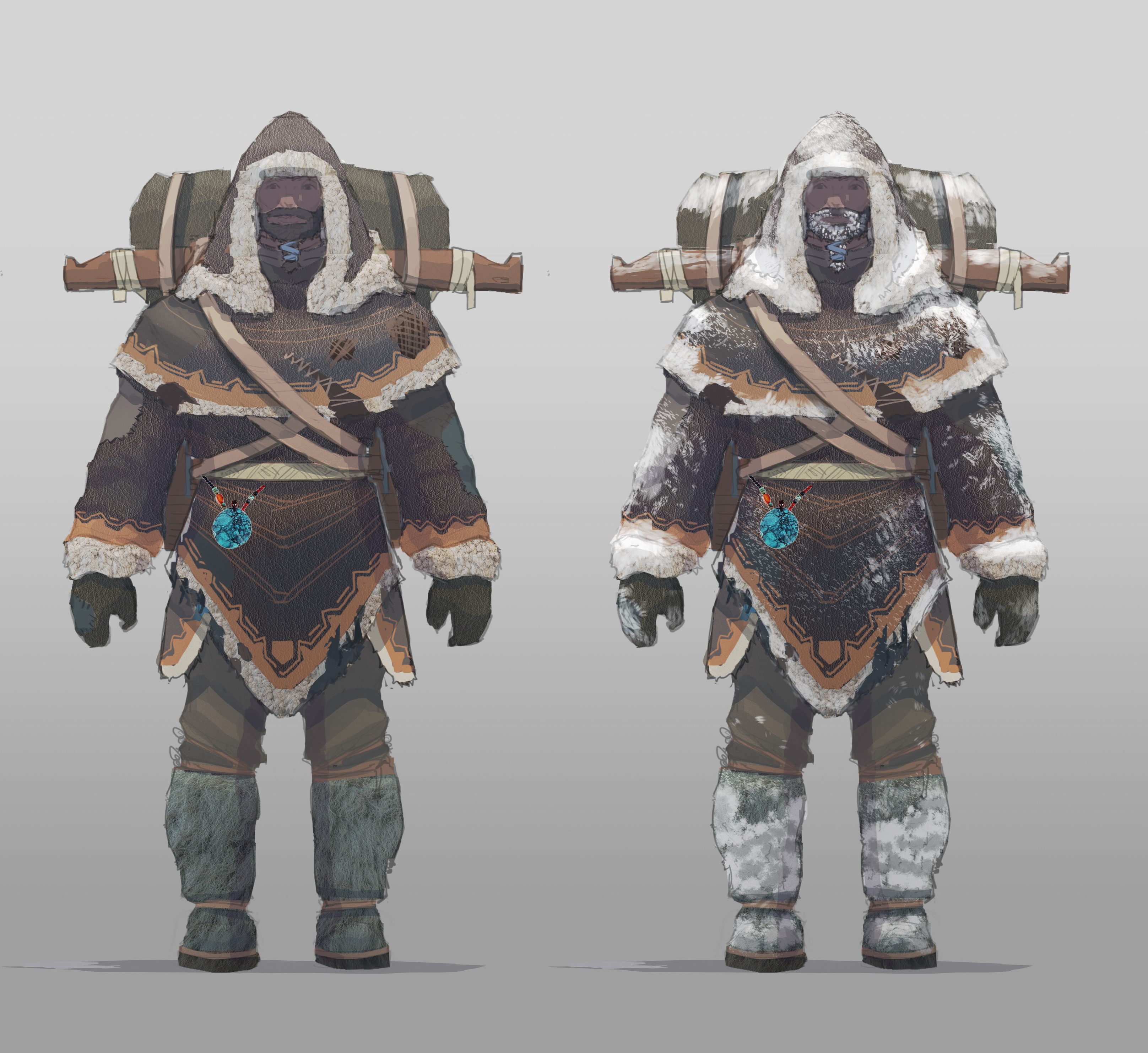 Before our concept artist started designing the first concepts of the character we set ourselves some boundaries, to make him fit into the setting.
We decided that he has to be a religious villager from a low tech civilization with a big backpack.
Afterwards our concept artist started with the design of the character.
The following is his work process:

"My first step was to gather references for clothing. I was looking for different mountain tribes as my source of inspiration.
Since the character is mainly viewed from the back and from a distance I took a screenshot of our game and blocked in some colors and shapes, which are readable from a distance.
Using the rough block out and my references I designed the character's equipment in front, side and back view.
Feedback from other artists (and the whole team!) is really important. After every stage, I asked our 3D Artist for his opinion to choose the best next step. After the first draft, it was especially important to approve the design and find technical difficulties. In my first version, the clothing was too long making it too complex to animate, so I changed the design.
Also we wanted a different hat and face, some roughness, snow and smaller details.
I started adding base colors to my line-art to show if the composition of the thumbnail is working with my design.

I added a gradient, which is darker at the bottom and transparent at the top, which simulates a diffuse light source from above.
After that, I added drop shadows and darkened the Areas which aren’t directly lit. That’s enough to get the point across. No reflected light needed.
After establishing the light I added some snow to adjust his look to our environment.

I placed the rendered version in a screenshot to show my team how the character would look in-game. After approval of the team, our 3D artist started creating the 3D model."

As mentioned in the last devblog we worked out a method to connect tiles on the same height edgeless with each other.
We wanted to introduce a workflow with tileable textures to get more freedom in scaling the UV's and have some overlap.
The benefit of this workflow is that you can expand Uvs from 0 to 1 without consideration of the UV-space.
Because of the shape of the hexagons you can achieve an edgeless transition between tiles next to each other through the right positioning and the right size.

The same goes for the sides of the hextiles. In that case, 2 sides have to fill out the space between 0-1 with their UVs.

The only downside to this workflow is the height difference between hexagons, which cancels out the benefit.
As soon as one tile is shifted one height unit, the whole pattern of the texture breaks.
It is possible to offset the UVs by this one height unit on a separate object to solve this problem, but this doesn't provide a full-on solution for our game.

All in all, we see this as a good field test to improve our understanding of the hexagon art style and helps us to decide in which direction we wanna go with this style.

In the next DevBlog we can hopefully show you guys the different weather conditions and the new character model in the actual game and tell you more about the story of our game!

If you want to support us and be part of the community feel free to follow us on Twitter and join our Discord. There you can also send us your ideas, suggestions and wishes for the game, discuss these ideas with the other members and later on be one of the beta testers.