After a solid fortnight of work, we have a new bot and a few new weapons to show off!

G’day everyone, we are wrapping up our fortnightly sprint and have some new exciting things to show off. Let’s get stuck in!

Fleshing out and expanding our combat was the main focus for this sprint. As you may have seen last update, we have now added in our version of a “Rocket Launcher”. Although ours fires Gamma Orbs, it still fills that vital position of giblet deliverer.

And now lets see it in action!

"But wait, what about Quad damage?" I hear you type furiously...

Be sure to check it out on YouTube as our Sound Designer has been hard at work bringing punch to the gun.

We’ve also continued to further our arsenal in new and creative ways. Introducing our Rust gun. Finding the enemy moves with too much swiftness? Well you’re now in luck! Blast them with an unrelenting stream of salt water, rusting up their joints and slowing them down! It can also be used in game with environmental puzzles, more on that in further updates! 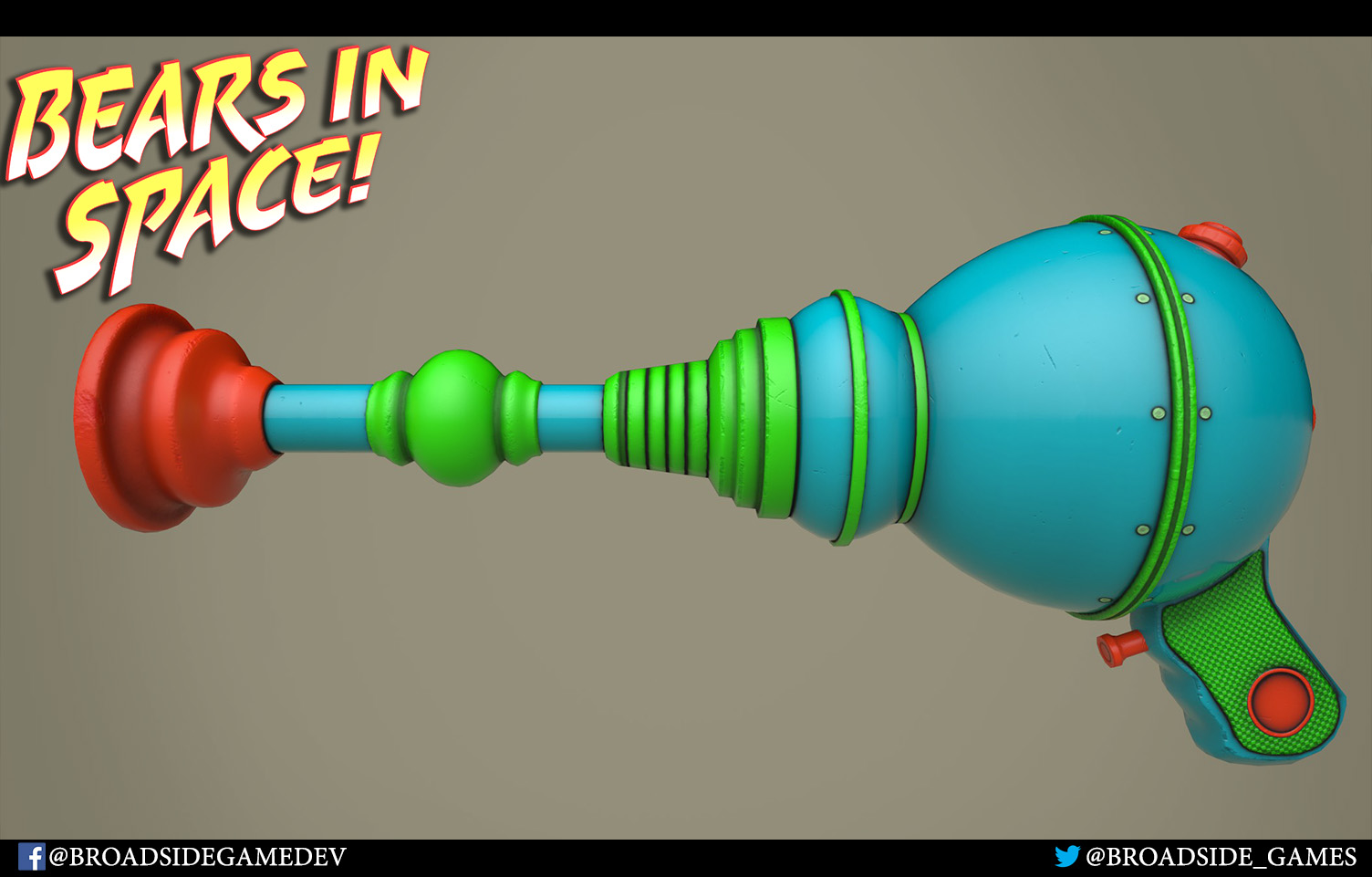 We even have it coded and in game, with only a few more gamma bugs to squash.

Also in the prototype stage is our new Magno-tronic (Still working on a name) tool. 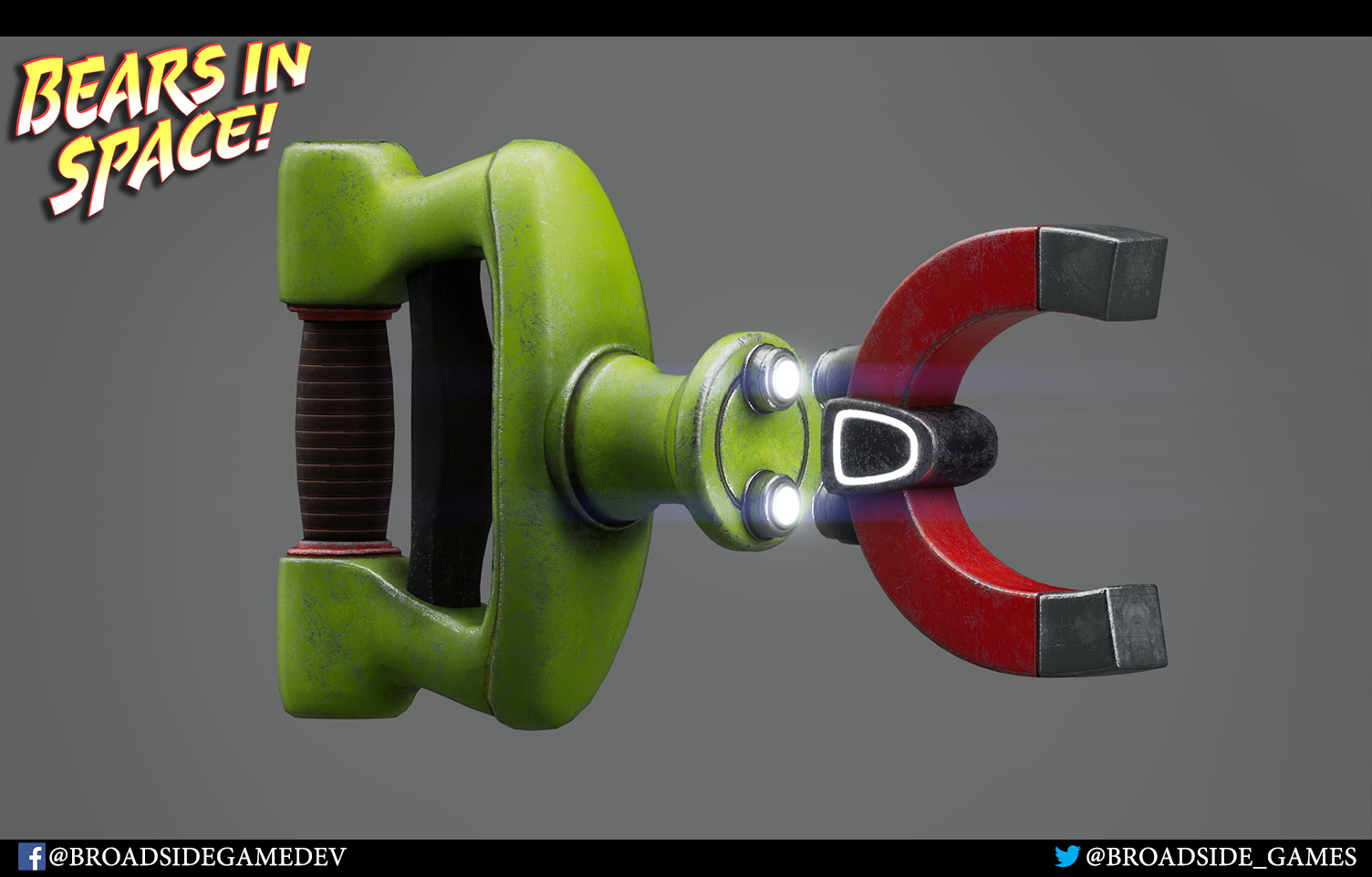 Just when you thought stairs were safe… introducing our new enemy! The Gamma Slapper!!! 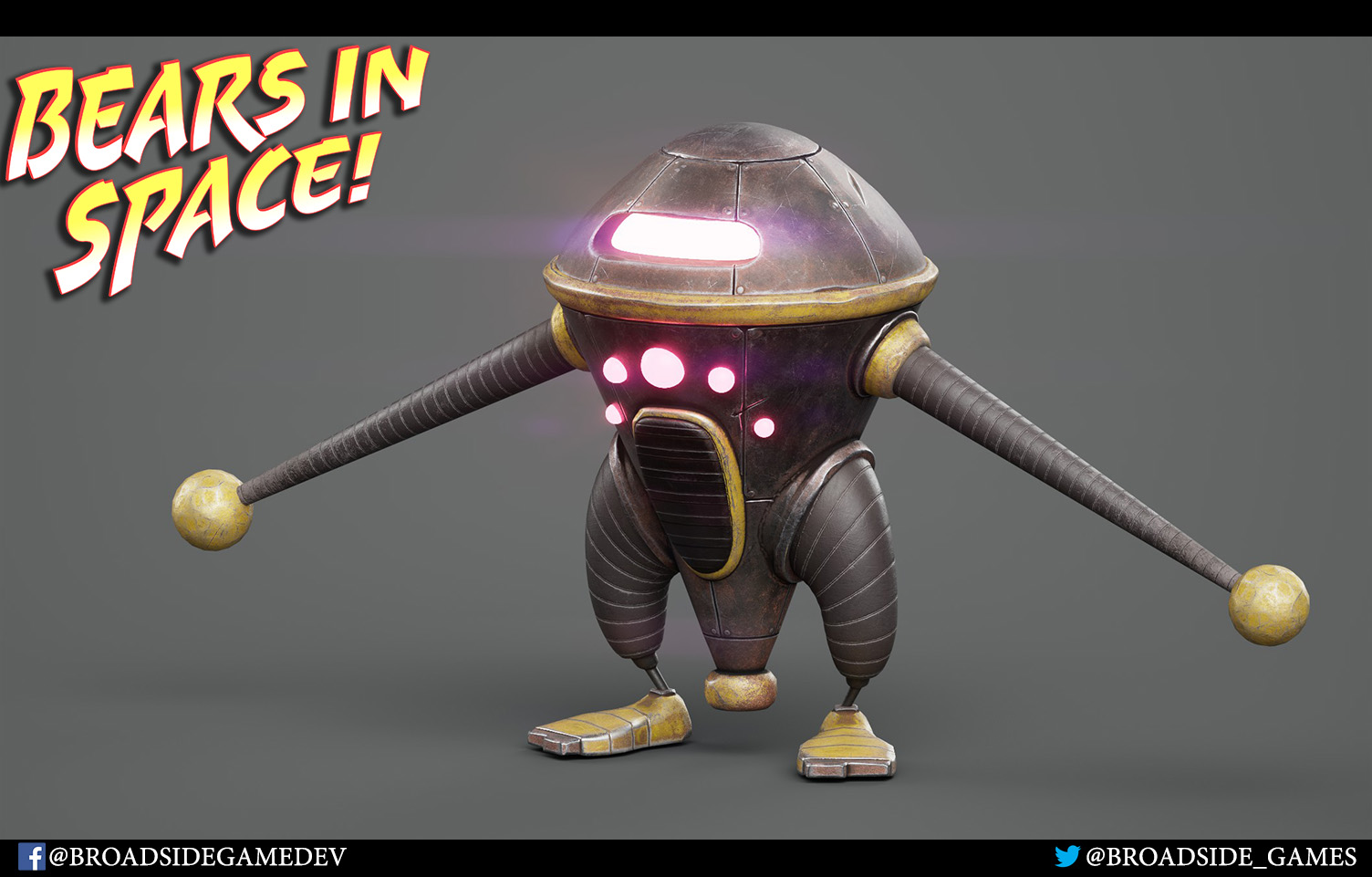 All our other bots so far have been easily defeated by a sharp 90 degree menace, known as stairs. 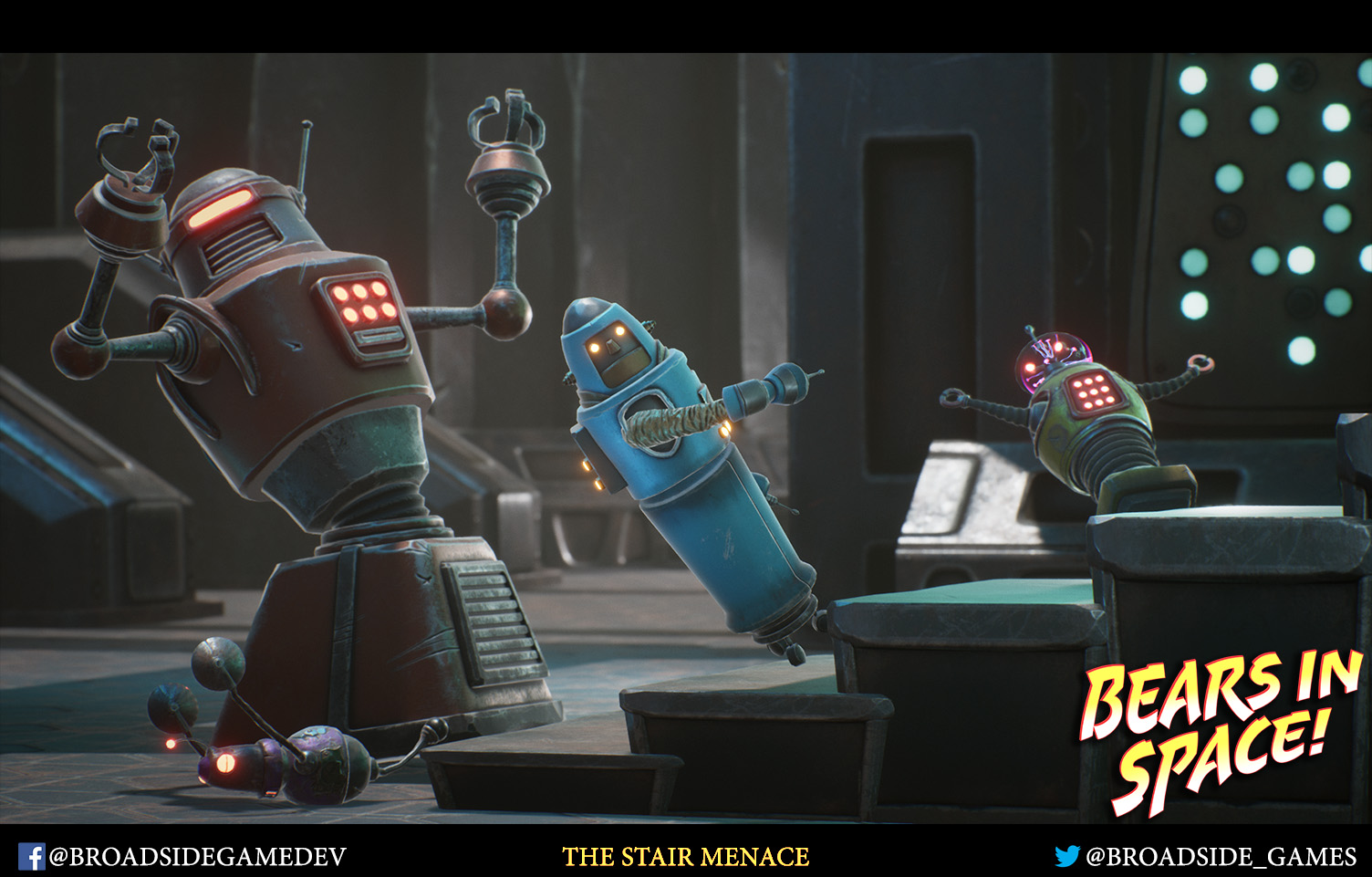 But not this bot! This is our first bot to not have to rely on wheels to get around, the first of its kind with new Nuclear Powered Gamma legs. This big bot's main goal is to keep pressure up on the player. Using his large gamma lightning tentacles, this bot can deal damage from range and can quickly close the distance to the player with a furious leaping attack that sends out a shock wave of gamma lightning.Our next sprint will focus on animating him and tightening up his gameplay loop.

Wrapping up this update, we take a quick gamma-gander over at our concept art. We’ve been exploring the world of Bears In Space and looking at how structures are built, defining a style with a keen focus on a modular approach, being able to build out variations quickly is extremely important for our small team size. 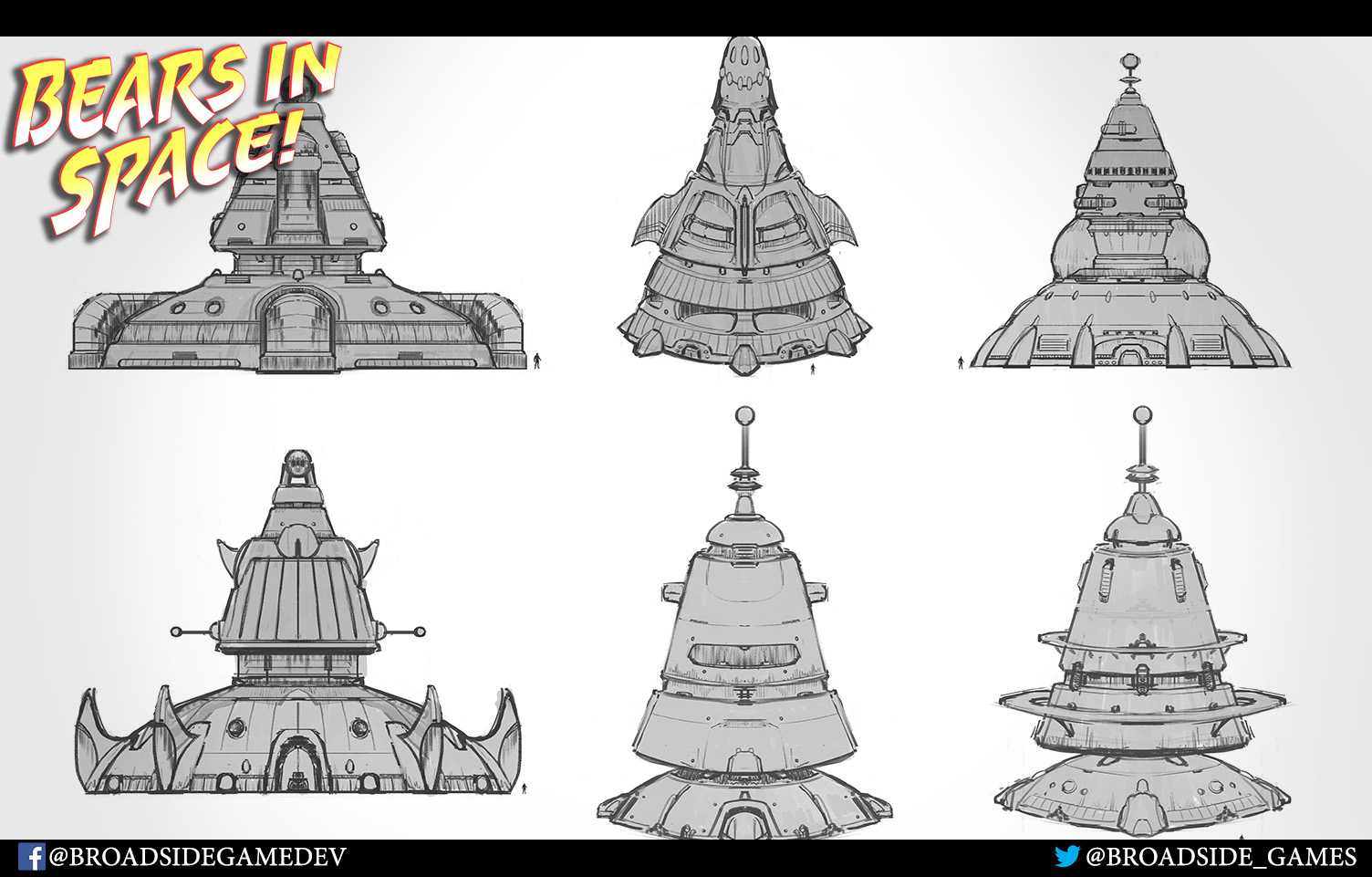 Thanks for reading, stay tuned for when we complete our next sprint, which will mostly aim to fix and polish some gameplay elements in need of some care.

I see no Timesplitters resemblance at all. Barely any Serious Sam references. I don't even see any humans, let alone bears in this game. Everything is mechanical.

That's fair, you are looking at a snap shot of our progress that focuses down mostly on our Rocket Launcher :)

To clear things up in order.

Timesplitters - Bears is built with humour at the forefront, we take inspiration from the way Timesplitters (particularly the third game) presents their humour and story beats.

Also the animation style and over the top acting is something we are trying to capture from the Timesplitters universe.

We also have arcade modes and gags littered throughout the levels which when found become unlocked and playable from the menu.

Serious Sam - Not present in this update. But we have massive arena sections in our levels with hordes of enemies that all work off each others strengths and weaknesses.

The level we are currently finishing has around 400 enemies to slay. Also the humour and enemy placements of Serious Sam are a big influence for us too.

You play as a Human Bear Hybrid, this is caused by an accident at the start of the game (No Spoilers!). As you progress you unlock more and more bearlike abilities that help you on your adventure. Think the Fly meets Altered Beast.

Everything we've shown so far is mechanical ;)

Hope this helps clear things up, feel free to ask anything else :)