I've just finished uploading beta build 0.965b and demo build 0.965d, which restore the take/drop and use cursor modes, change some battle behavior, and fix some important bugs.

Both the beta and demo include the following changes: 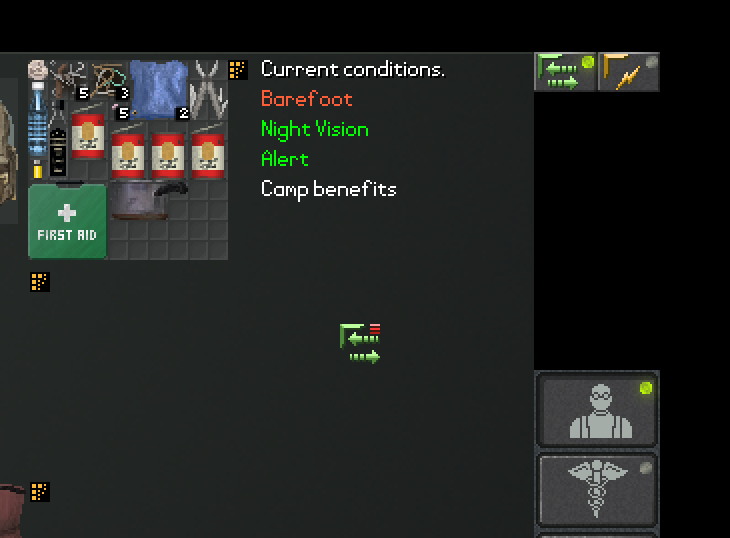 Power users rejoice! Cursor modes are back!
As mentioned yesterday, I tried to find a way to restore the old cursor modes that many players miss, without disrupting the new mouse controls that were added. The result is a mix of the two.

Furthermore, holding the "2" key will temporarily switch the cursor to "use" mode, so players can quickly burn through a stack of food, or similar consumable, without having to right-click each time. Releasing the "2" key returns the cursor to whatever default mode was set before.There's also a UI indicator (pictured above) which shows the current mouse mode. It's mainly there because it has a tooltip to remind new players how to switch modes, if they're interested.

The battle screen also had some changes. Several players had asked about the extra move they were granted when leaving combat with 0 moves left. This was actually a bug, though a benevolent one. I've made changes so this no longer happens. Players will also no longer accrue new moves during combat.

Plus, quite a few bugs were fixed, including several null pointer issues. As always, null pointers can cause unpredictable behavior, so every one we nail makes the game more stable.In particular, one of the bugs fixed involved crafting stacks of items. If the crafting yield included a stack that matched something on the ground or camp, there was a chance of the camp/ground stack being deleted. I think this was the cause of many bug reports of missing crafting ingredients.

Hopefully, this new build alleviates a lot of the mouse clicking discomfort players have reported. And the added stability should make the game more reliable.

As always, thanks for the candid feedback and bug reports. They're a huge help!

PS: In case you missed it, update 0.964 also had quite a few fixes, plus added the ability to empty out containers via the context menu. So if you haven't updated in a while, it's definitely worth doing!

I personally have found the mouse clicking stuff really annoying in the past, so it sounds like this will be a great update.

Will you still be able to use Painkillers mid-battle? I notice you're removing the ability to access the conditions screen (and by extension, apply bandages) during combat, but what about other actions? As a side suggestion, maybe you could make one of the combat options a 'support' action which lets you heal or something but takes up a turn?

I'm hoping this update helps with the "too much clicking" that many people mention. We'll see!

As for support actions in combat, they're still possible. What I meant was that the conditions screen is inaccessible during times when the items screen is normally inaccessible as well. Basically, one cannot assess wounds or fidget with inventory while they're being attacked (in opponent's weapon range). However, ducking out of range (e.g. >= 1 for melee) allows the player to access inventory and conditions normally.

I didn't think it made sense to examine a wound and fish in a backpack for pills while a dogman was tearing one's stomach out :)