In game the new class of the ships - Torpedo boats is added. It is the first fighting class acting on the party of the opponent. 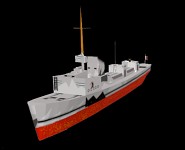 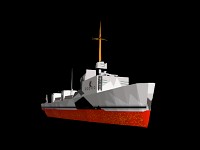 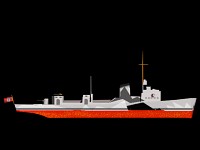 New fighting unit is entered into game - the Torpedo boat.The vessel belongs to fleet of the opponent and has T-1935 designation.

Briefly about characteristics:
- Speed of 30-34 knots (twice quicker than our boat)
- Seaworthiness: The LOW- Opportunity to difficult maneuvering:
IsArms:
the tool 105MM the Main caliber (it is located aft) - 1 unit.
The 3rd gun торпедныеаппараты - 2 units.
Stock of deep bombs - 30-35 units *

** Bombs can be removed, and mines are aboard accepted. When using the ships as mine zagraditel, using the main caliber is impossible in view of constructional features.

Now it is the first active opponent. Despite a wide range of arms, opportunity it aren't great, but it is quite enough of them for boat destruction.Though, carrying out the comparative analysis of the German fleet кригсмарине, at the time of the operations, even in enough the fleet couldn't brag of similar vessels. It is possible to tell that in a similar class, or weight category, almost the best from this that seamen could offer it. The truth if not to consider really excellent projects of torpedo boats, but it absolutely other class.About use of torpedo boats in game, I in detail described in the article "Torpedo Boats T-1935 Project".In article it is detailed and with pictures the behavior of the ships in game, ways of fight against them is described, good advice, and many other things is given. As some facts are given in article from life of real prototypes of the ships, I think all information will be useful and interesting.Article can be found here.