Alpha 0.0.2 adds secondary weapons, difficulty settings, and a jump-buffer so platforming feels much better. Steam Greenlight is going well but B-12 still needs your votes!

Posted by BrantiskyInteractive on Mar 3rd, 2016

Hi everyone! Thank you so much for the positive feedback so far. I still need your help on Greenlight, so please help me get this game on Steam in the future by voting yes! I am extremely grateful for every single vote!

Let me say, I'm very excited about this new release of B-12! I wanted to work fast to address the most common feedback I've heard about the alpha so far. 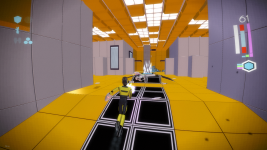 Many players found the game to be a bit too difficult right off the bat. I don't mean for this game to be only for highly skilled players, so I tuned the 'normal' difficulty down just a bit and added difficulty settings (easy, normal, hard, permadeath). The difficulty settings are quite deep, effecting not only how much damage B-12 will deal/take, but also the behavior of power-ups (magnetic on easy/normal, static on hard/permadeath), upgrade drops (max two per level on easy/normal, max one per level on hard/permadeath), as well as enemy firing rates and accuracy. The difficulty setting can be changed at any time in the pause menu and the changes are immediate. No level reload required!

I also finally decided to implement a secondary weapons system! 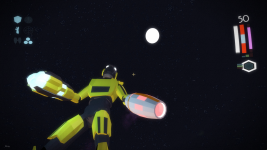 The secondary weapons are basically pieces of robots that you've destroyed. Some will drop limbs that you can use as a melee weapon, or maybe they'll drop their gun and you can dual-wield next to B-12's own canon. You can swap your secondary weapon any time using the same key/button mapped to secondary attack as long as you're standing close enough to the other weapon. This means if you want to use your secondary attack, make sure you're not standing too close to any other weapons you could pick up.

Another thing that was mentioned a lot was the difficulty and unforgiving nature of the platforming sections (especially level 1-1). I had not properly researched jump-buffering and hence had not implemented this feature at all. Jump-buffering is where you allow the player to press the jump button just a bit too early or a bit too late and still make their jump even if they just landed or just fell over a ledge. It feels MUCH nicer now. 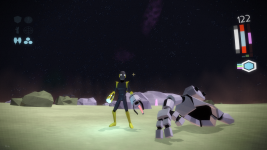 There are some other tweaks and changes which can be seen in the full changelog in the readme.txt file if you'd like to know more. Please check it out and let me know if you encounter any bugs or have any suggestions.