I made good progress in October. I've added six maps and five hairstyles to the game. I've also implemented some new features and improvements.

The defense at Camp Nimbi consists of two pairs of precision turrets. One pair is on a hill on the northern edge of the camp, the other in a wood on the southern edge. Each pair consists of one thermal and one ice turret. They are all activated by entering and remain active for 60 seconds after exiting. You can reset the timer at any time by re-entering.

Once at least one of these turrets is active, the spider you're aiming at gets highlighted by a white outline and a separate reticle. This is because precision turrets shoot at excatly this spider — at any range, even outside the camp border.

When all four turrets are active at the same time, you have enormous firepower available, which also scales with your power level.

But before you get too excited, remember that you have to keep an eye on the timers and switch locations when necessary. In addition, depending on the distance to the turret, the projectiles can take a second or two to reach the target. The fact that only one spider is shot at at a time doesn't make things any easier either.

All of this means that when in doubt, it's better to take cover than to rely on the firepower of the turrets. However, they are ideal for eliminating elite opponents from a safe distance. 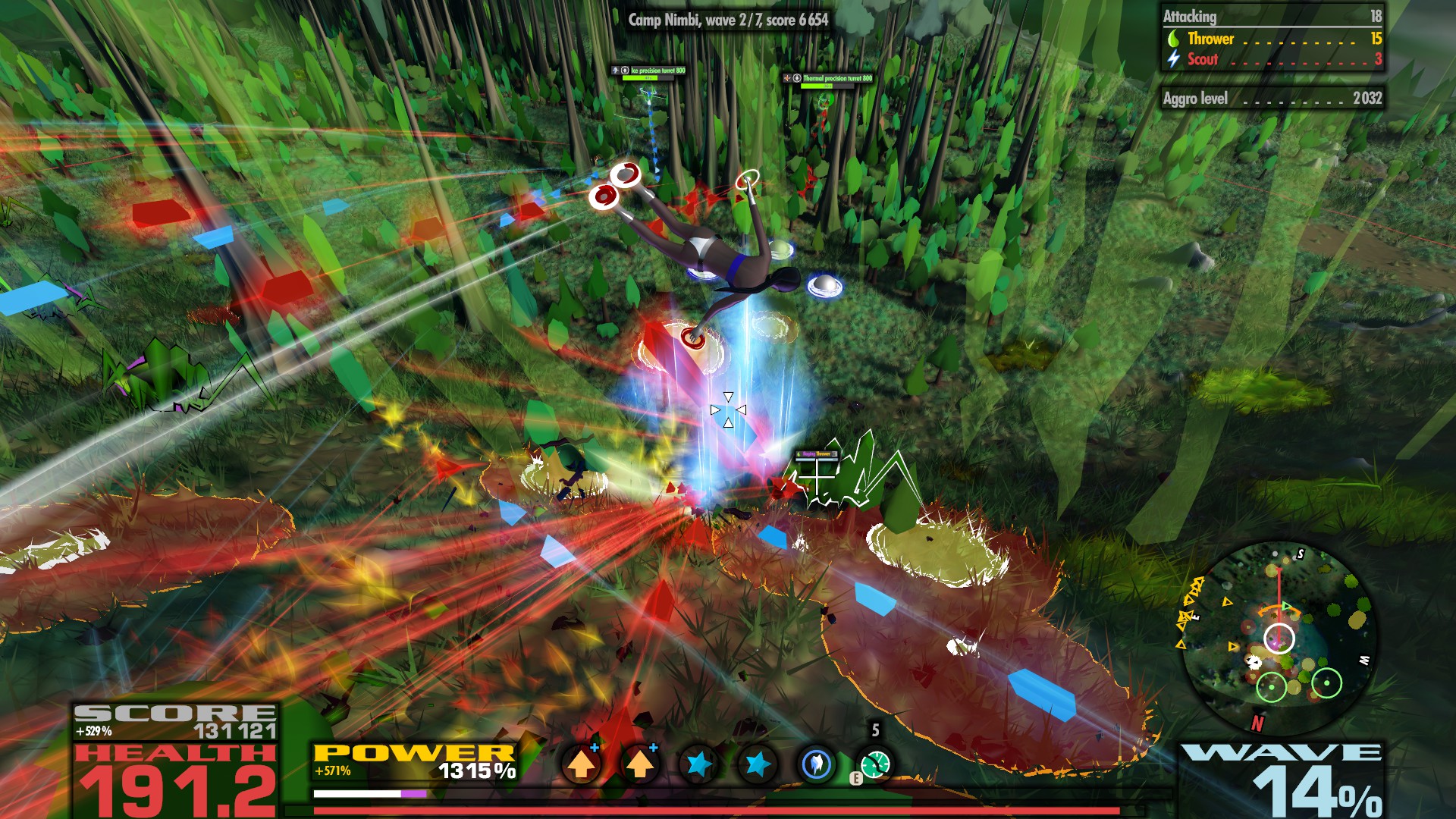 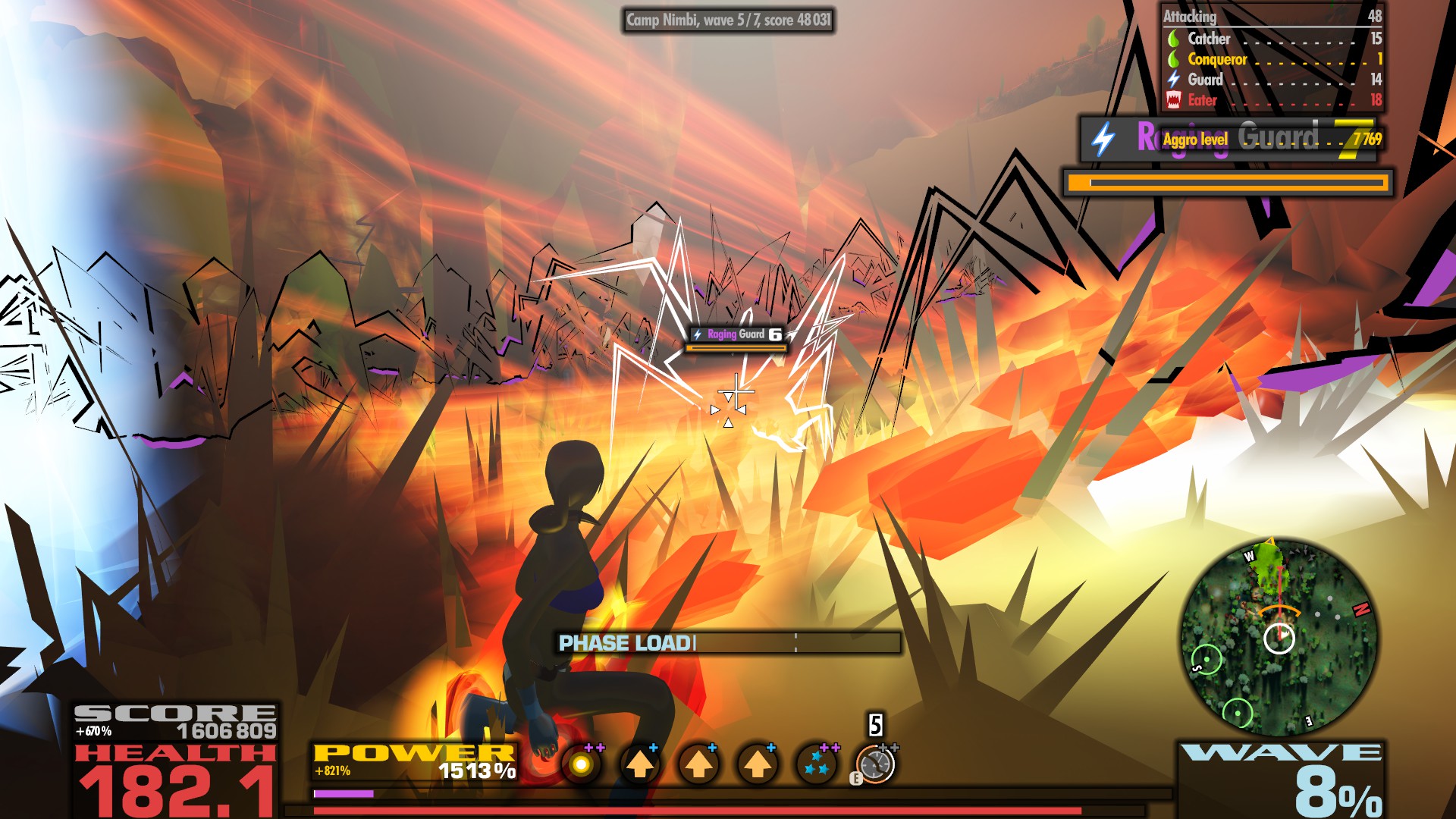 Camp Veris is located in the middle of an eerie forest. Five small but very powerful ice turrets form the camp defense. You can activate them by entering. They remain active for 10 seconds and then switch off for 30 seconds. Therefore, it is best to keep moving and change location as soon as a turret switches off.

It's important to keep in mind that these turrets run on a fixed timer once they get activated. On the one hand, this is good because it means you don't have to stay inside them.

But on the other hand, it means you have to worry about premature activation. The spiders sometimes struggle with the trees and may not be as close as you thought. Try to slow down when you approach a turret and wait until a couple of spiders are inside its range before you activate it. Yes, this can be tricky to pull off. 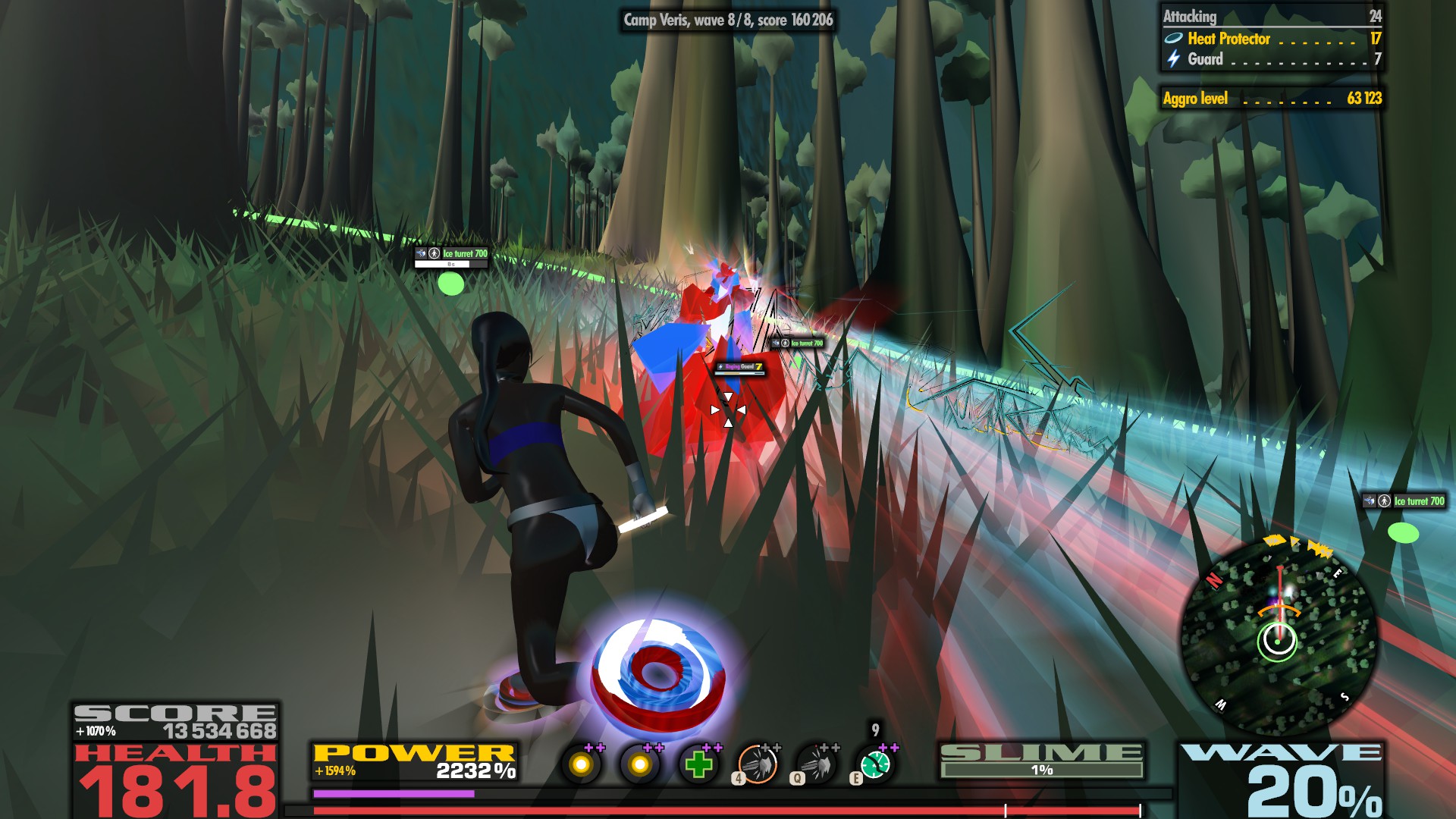 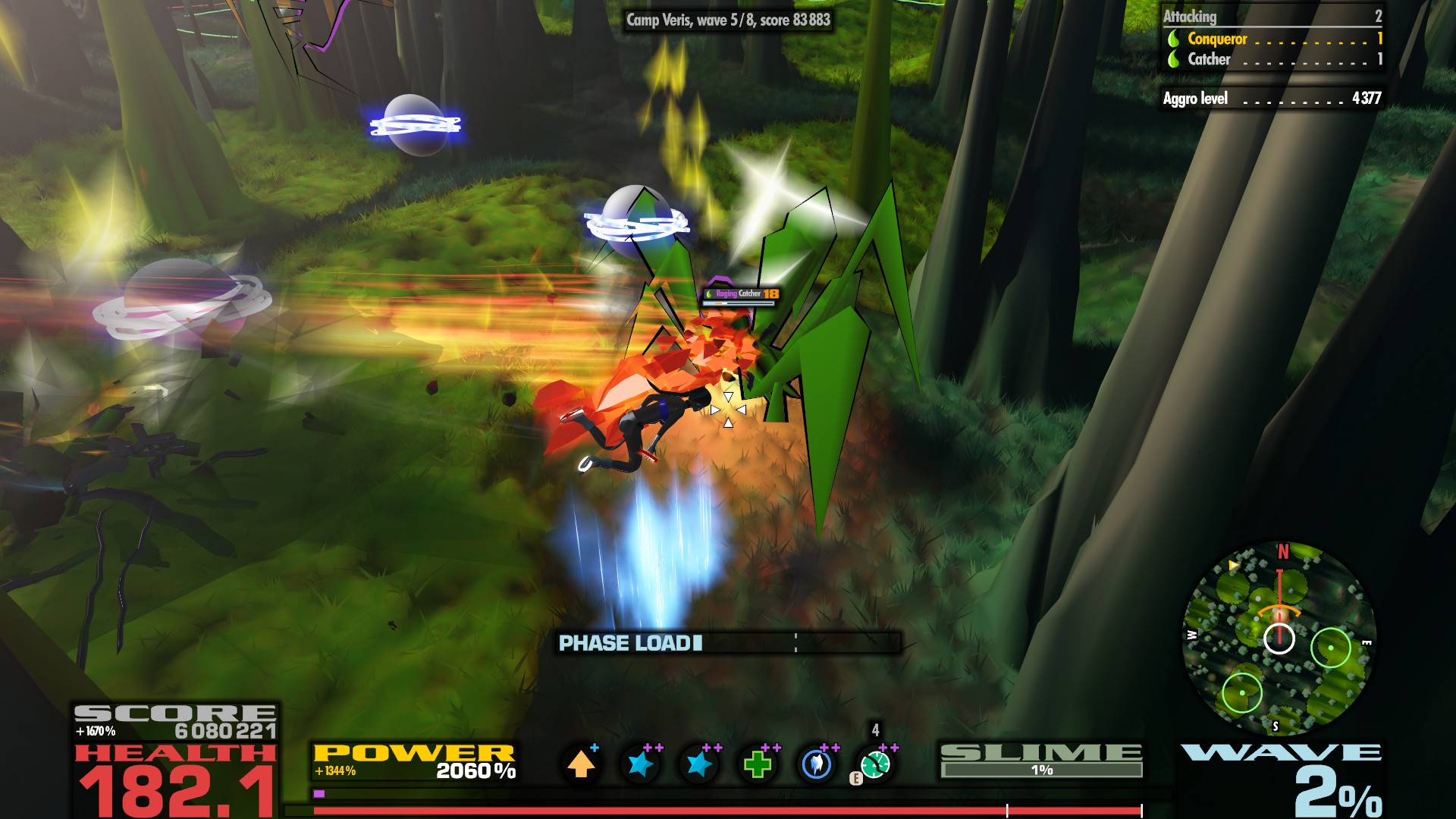 Camp Frigoris offers two transformers, each surrounded by four ice turrets. The turrets activate for five seconds, when the transformer next to them harvests power from a dead spider. The timer resets every time a spider dies inside the transformer's range. However, once the timer runs out, the turrets enter a cooldown state for 30 seconds.

Of course, you don't want that to happen, so make sure to keep the transformer busy. It won't be long before you realize that the ice turrets are a double-edged sword in this matter. Yes, they help you kill enemies, but they also freeze them. Since they only partially overlap with the transformer, more and more spiders will inevitably freeze up beyond its range. Not only are they of no use to you there, they can also block other spiders from entering.

Therefore, make sure to keep the turrets clean and clear blockages quickly. I highly recommend the energy flash skill for this task.

Sooner or later, however, the turrets will switch off and it's time to move to the other facility in order to bridge the cooldown. But keep in mind that only the turrets switch off, the transformer is permanently active. So if the other facility is overrun by spiders or littered with poison puddles, then staying where you are is worth considering. 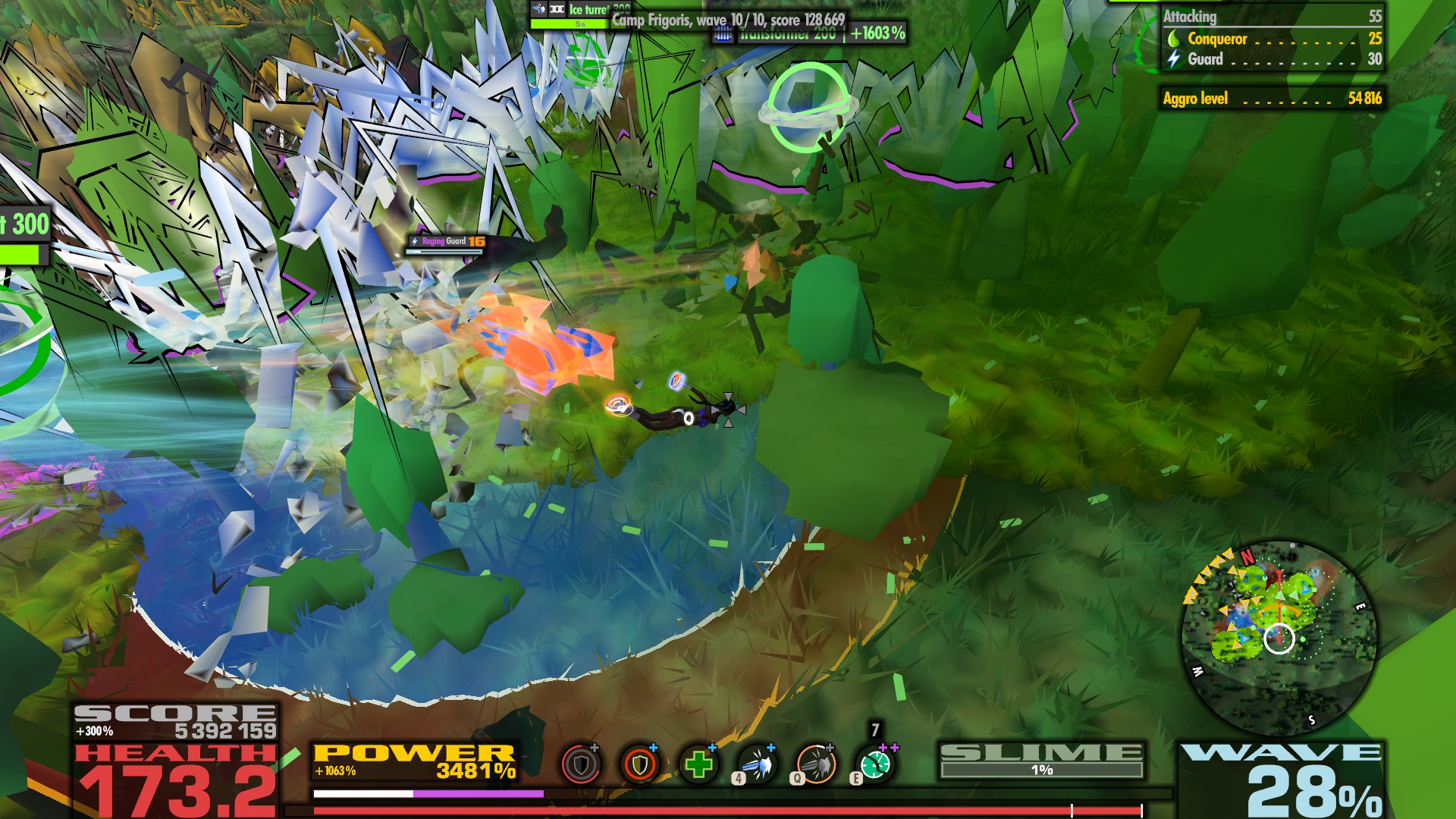 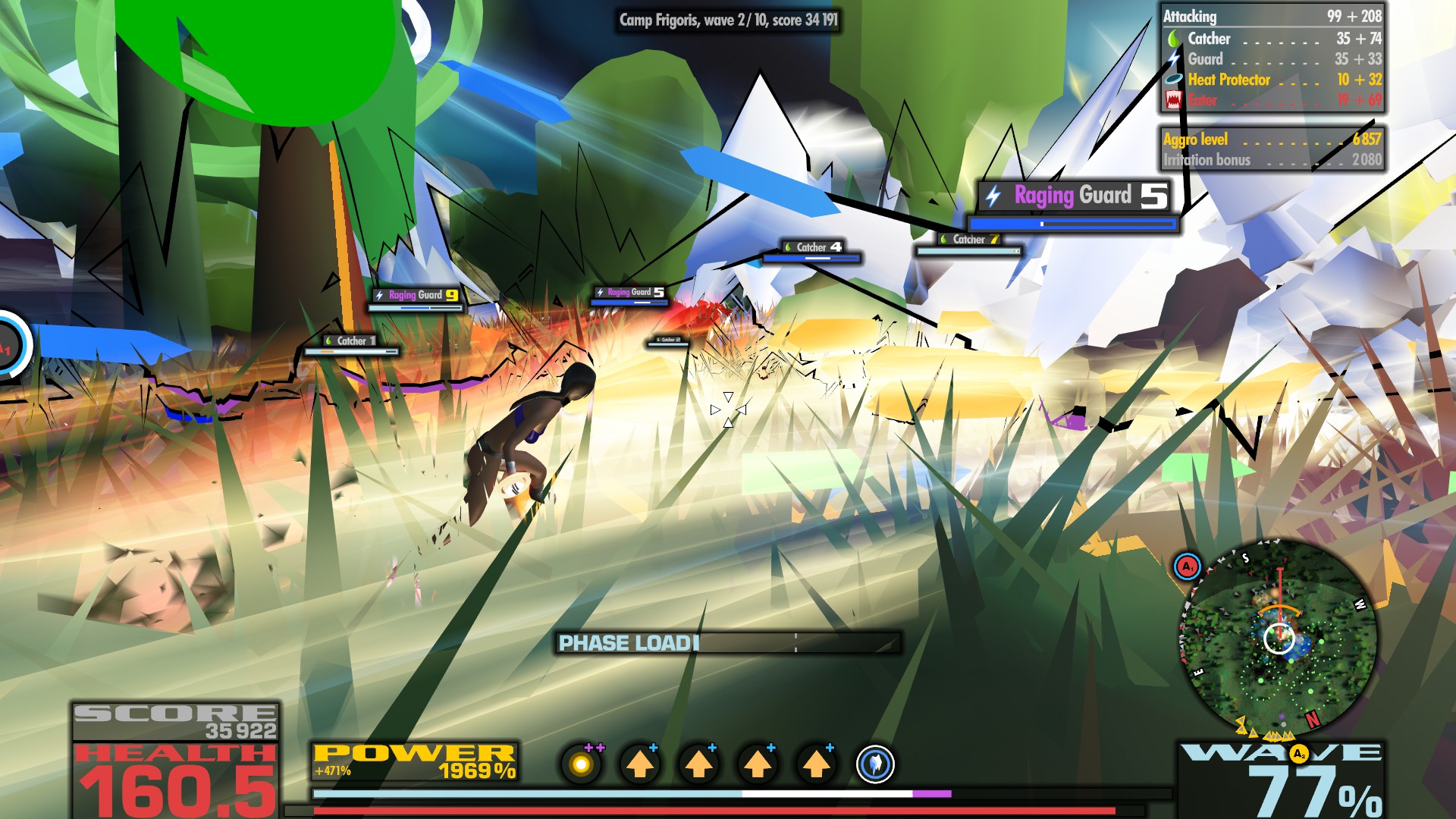 The main defense at Camp Procellarum is a thermal turret with decent firepower and huge range. The facility is on a hill to the west. Up there you not only have a beautiful view, but also a strategically advantageous position. However, the long range of the turret can become a problem if the firepower is spread over a large number of enemies.

Fortunately, there are four fetchers available for this situation. They each transport up to 30 randomly selected enemies deep down into the forest, granting them the opportunity to ponder life decisions for a while. The fetchers are activated manually (i.e. by clicking on them), which can be done from the top of the hill. However, they have a fairly long cooldown of 50 seconds, so their use must be carefully considered. 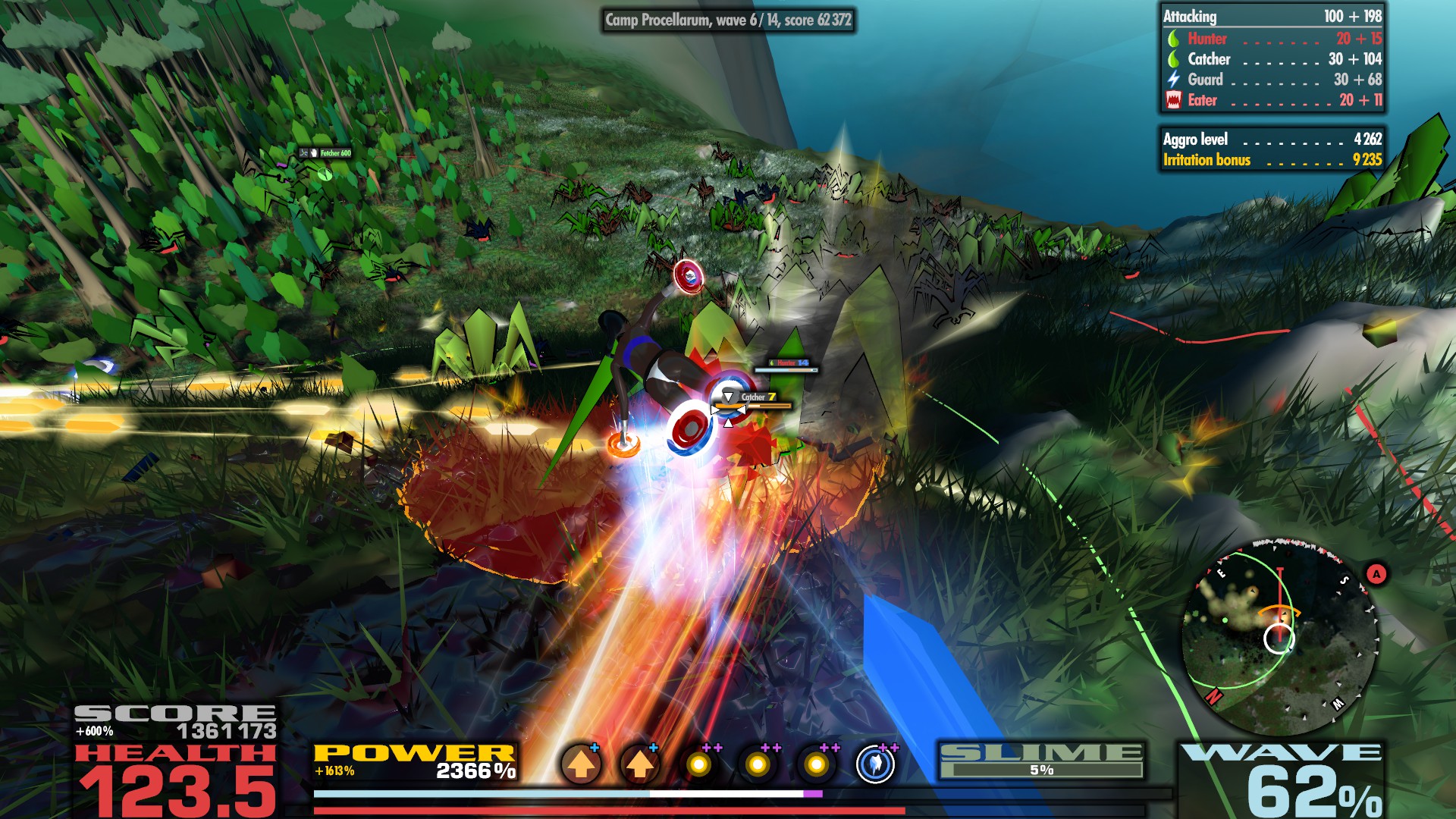 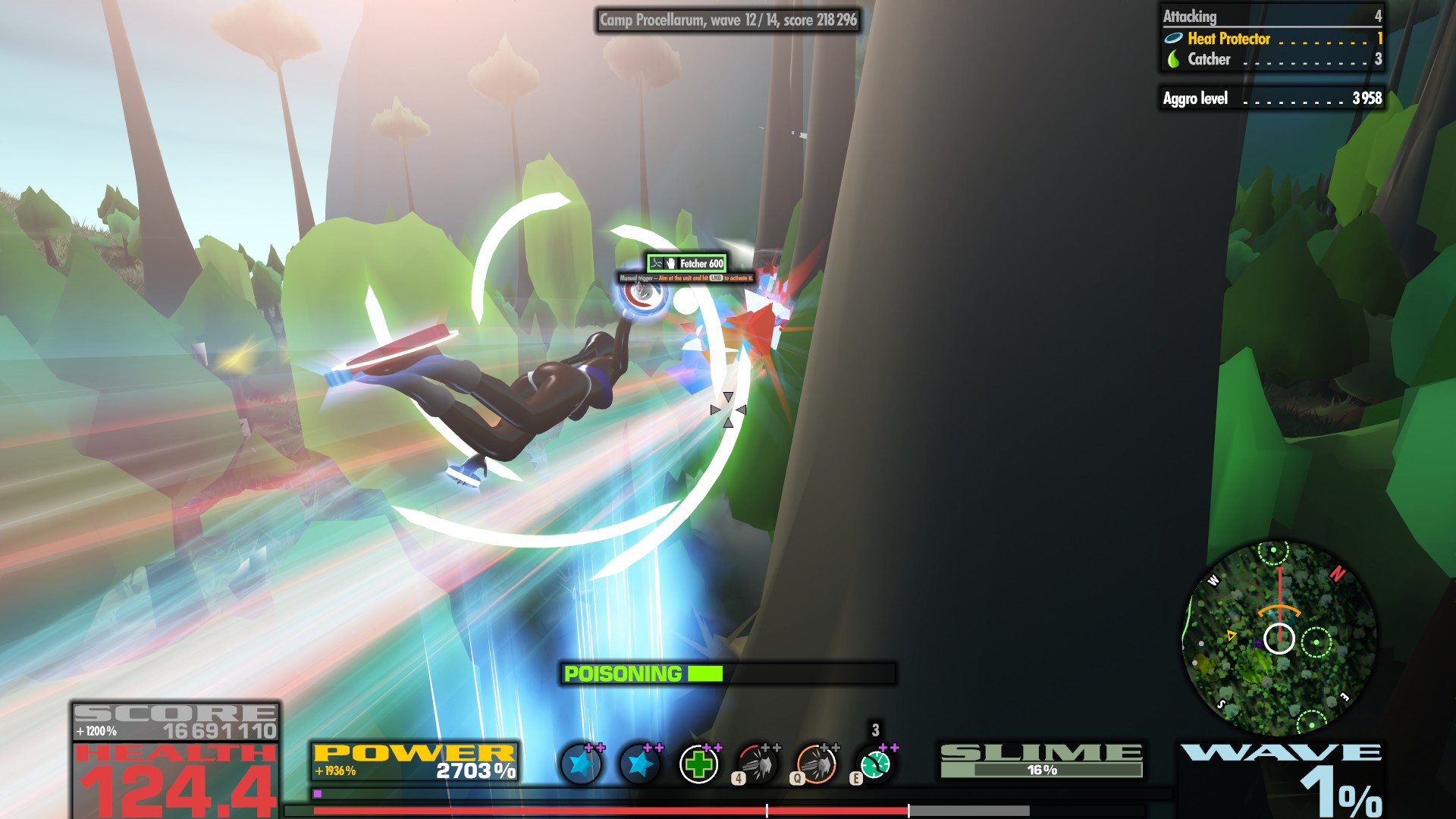 Camp Honoris is located between a forest and a steep slope. The defense consists of two powerful ice turrets, each supported by a thermal turret. All turrets are activated by entering them. But be careful with the ice turrets, because when you leave them they switch off for a 30 second cooldown.

If you get overwhelmed and have to leave the position, it is a good idea to glide down the slope. You will hardly take any damage there and you can easily fire at the swarm. But the emergency teleporter is hard to avoid, which can become a problem if there are poison puddles or dangerous enemies at the spawn point.

In this case, the forest may be the better choice. The thicket slows down the spiders noticeably and can give you a few seconds to breathe. 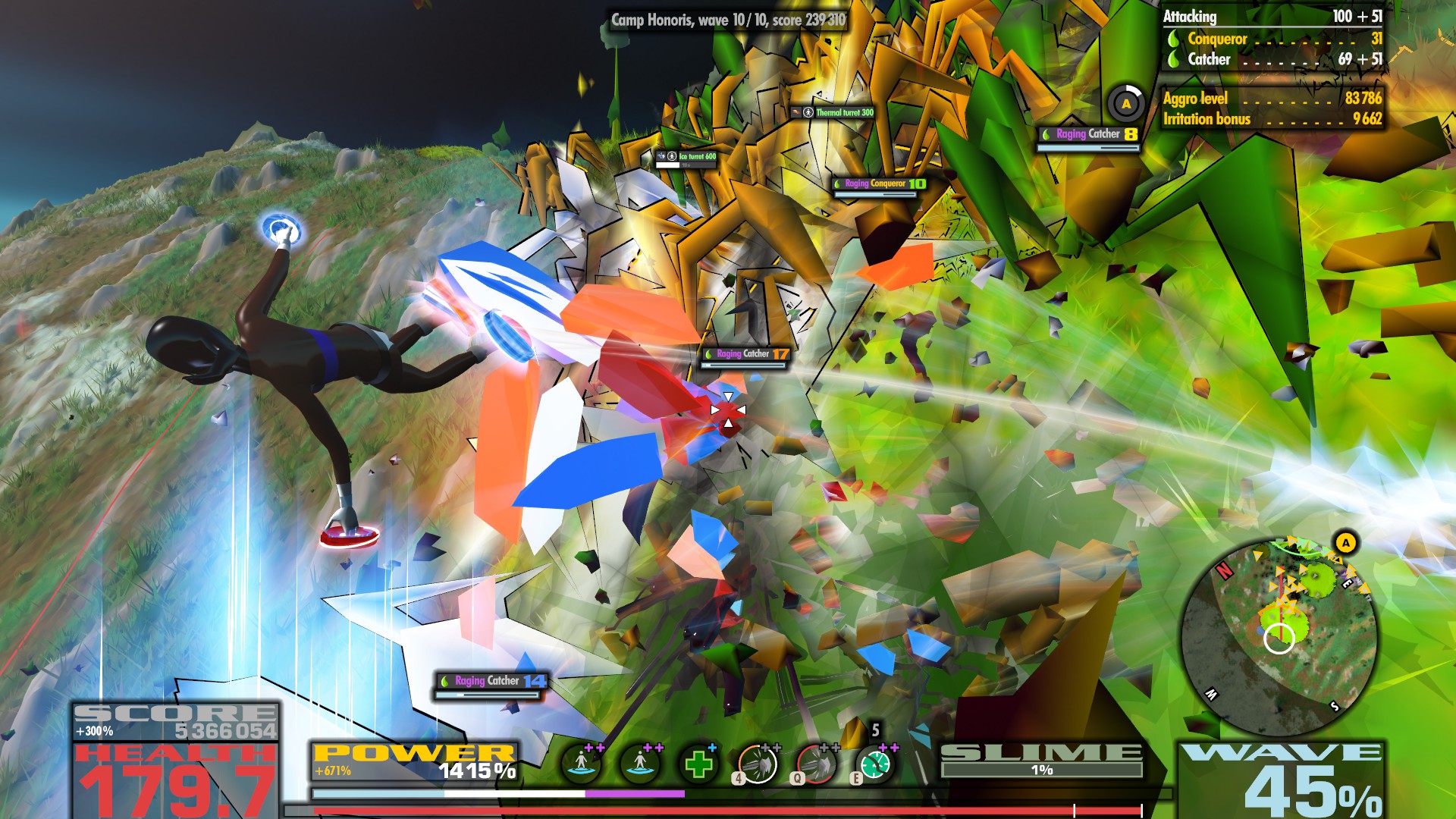 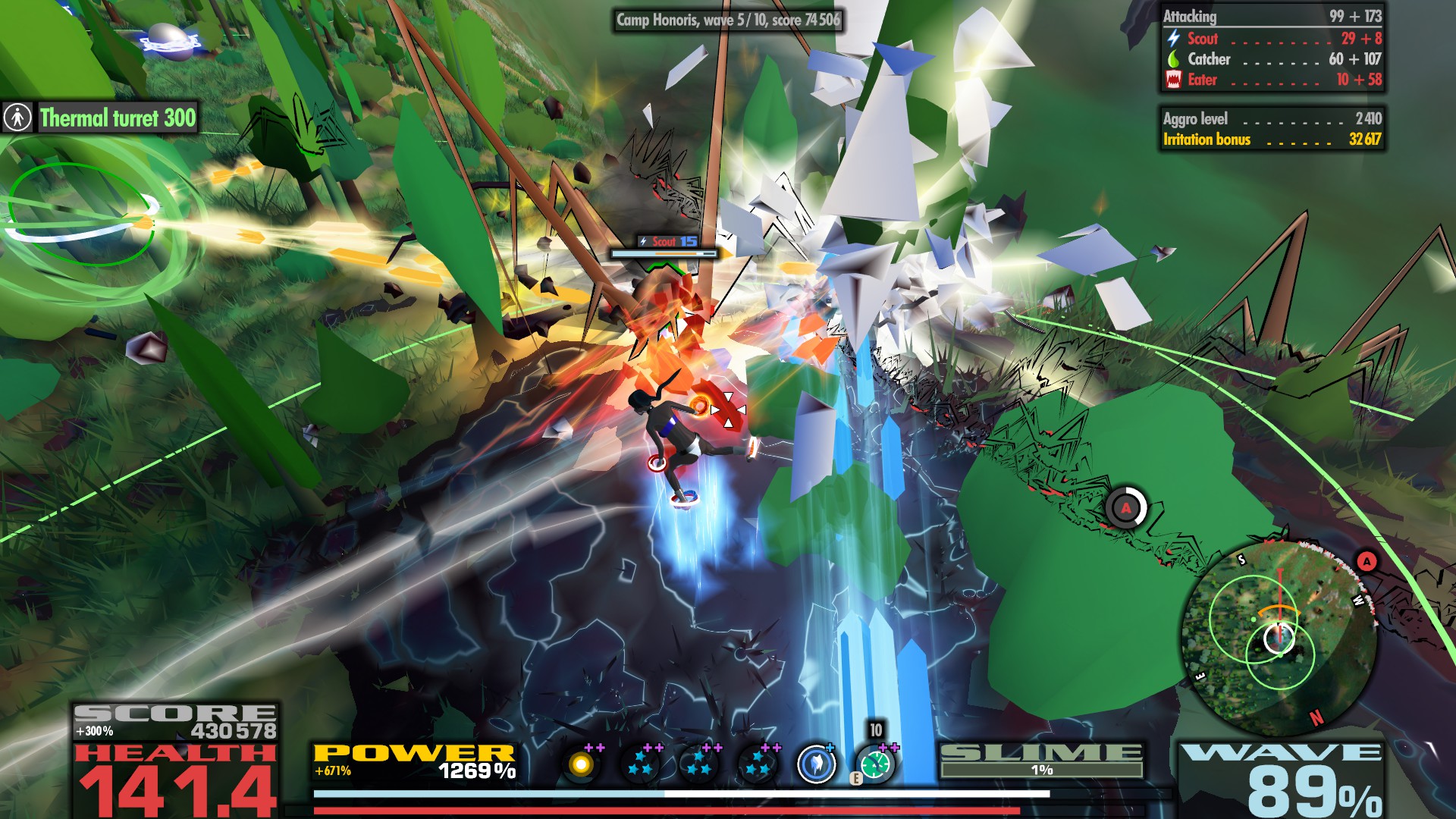 The defense at Camp Sal consists of three fetchers, one of which is activated in turn every 15 seconds. They can teleport up to 20 spiders into the target area, but each focuses on a different type of enemy: elite, assault, and regular. Being in the right place at the right time is of great strategic importance and you should therefore always keep an eye on the progress bars.

The fetchers can be used in two different ways. On the one hand, you can stay away from a fetcher that has just been activated and take advantage of the fact that the affected spiders freeze and are thus incapacitated for a while. On the other hand, there is of course hardly a better opportunity to actually kill them.

The 15-second rhythm is relatively fast and you will have to come to terms with the fact that you cannot always be there on time. But, of course, the one fetcher that could save you from a hairy situation always takes forever to activate. Take it easy and adjust your plans and strategies when necessary. 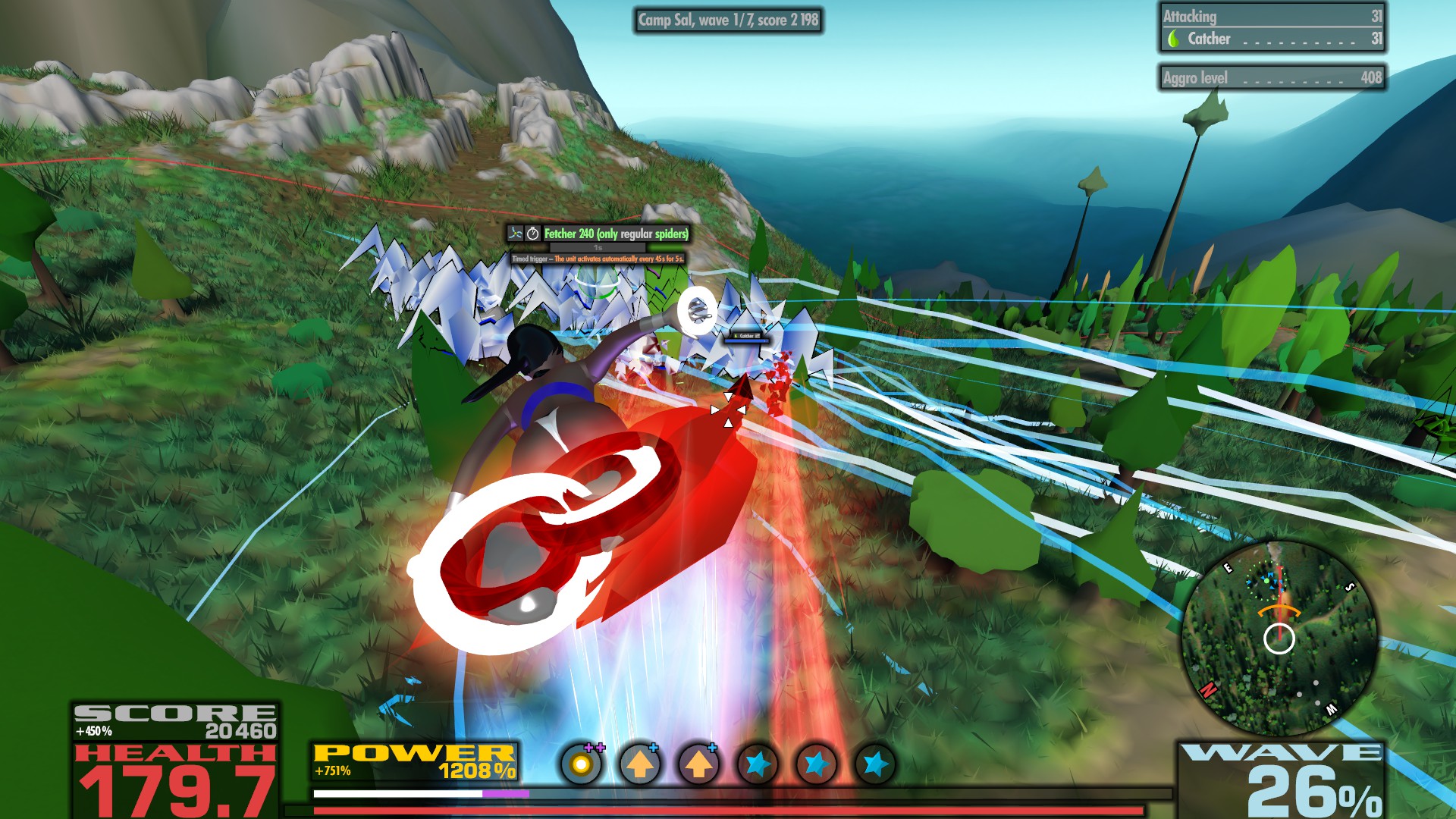 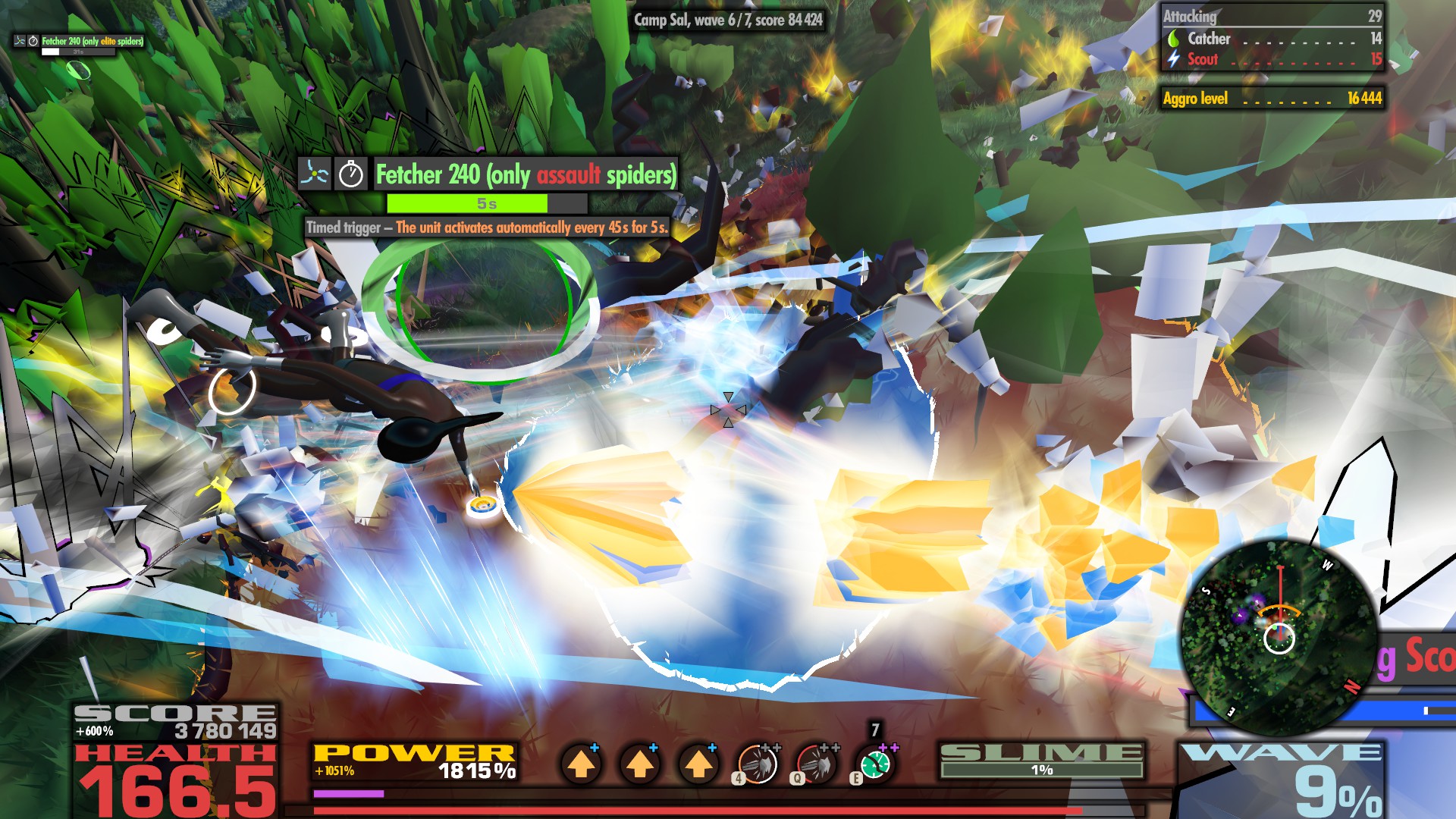 I've created five new hairstyles and added physics everywhere it made sense, including existing hairstyles. The only ones that don't have physics are "Bald" and "Ivy League" for obvious reasons.

Working with hair physics made me spot some bugs and less-than-ideal parts in the physics code. The fixes I made improved both hair and body physics. Most noticeable is that the physics code no longer generates unrealistically violent vibrations at high speed. In fact, it's so smooth now that I had to add artificial jitter to prevent the animations from looking lifeless.

You can now modify character settings whenever your journey score is zero, i.e. when you die, reach the happy ending, or manually pay out the journey bounty (in infestation mode).

When you meet the requirement, a new button will appear in the character menu that gives you access to all settings of the character designer. For example, you can try out the new hairstyles without creating a new character.

Thank you to RedAISkye for suggesting this feature!

It's been going well so far and I've been able to put out a content update every week. This is mainly because no serious bugs have occurred yet. Let's hope it stays that way. 😄