This week, I tell you more about how I'm making paint work in multiplayer mode, and I explain the new menu functions.

Hey everybody, I continue to be extremely busy with job seeking-related stuff, so I really have to squeeze development time into short breaks of 15 minutes these weeks. However, as you probably know if you're a long-time follower, I almost always have at least a little bit of progress, and fortunately this week is no different. It's just that I wish I could tell you I achieved more. I expect the storm will be over by next week :).

Multiplayer painting
Painting now fully works as a singleplayer feature: you can gather all materials, craft paint, and put it on your house. But then comes, as with almost every feature, the multiplayer part: making sure (1) the info is sent to the server, (2) the server saves the changes, (3) when you log in again, the server sends you this saved info, and (4) if you paint your house, the change in color is updated live to players in the neighbourhood. It's a complicated and mostly boring process; unlike the singleplayer feature, where I as a dev can see the exciting new thing 'grow' before my eyes, here the improvement is much less visible and more abstract. It's definitely worth it (I think multiplayer games generally are much more fun that singleplayer ones), it's just less exciting to make.

Next up are things like painting clothes, making sure the clothes will have the right colors both in the gui and in the world, and making sure that somebody's cloth color can be seen by all other players correctly.

User friendliness
As you might have noticed, every update I try to improve the user friendliness a bit. In most cases, this entails minimizing the number of clicks the user has to do to get to a particular feature, so more players will actually use that feature. A good example of this is that I decided to [show the achievements in-game], instead of only on the website. Suddenly, from a little side-feature only a few fanatics played with, it has become the main player guide almost everybody uses, and, more importantly, encourages them to play more. This update, I'm going to bring other website-only features closer to the player, with an in-game more button. 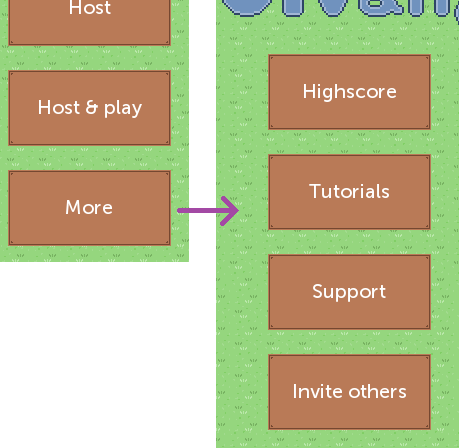 By clicking this button, you get access to four features that were already available on the website, but which I expect a lot of player don't know about, because they don't use the website. I picked Highscore, Tutorials and Invite others because I think all of them will increase playing time, which is my main goal at the moment; the highscore because it adds some competition, which can really encourage people not to give up, tutorials for people who give up because they're confused, and the invite page because I think a lot of people don't know you can play with your friends for free. Finally, I picked Support because I wanted to show you can communicate with me directly.