Posted by Mr.SlobodanMilosevic on Sep 26th, 2018

Soviet Union Starts as Communist nation and ruling party is Communist Party of Soviet Union.Leader of country is Mikhail Gorbachev: 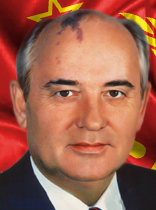 And he is the leader and later the preisdent of Soviet union untill 1991.

Soviet union start with some national ideas(we will ad more in later updates of mod):

When Soviet Republics start declaring there independence, player will be able to choese if he wants to continue as soe of republics and they will gain independece trough autonomy system and events.NOTE:this is only a theory but at the moment we are trying to get more lore and see what we can do about it.

We wil try to make an Focus tree for Soviets and for soviet republics too.As its sed in last article Focus trees will lst untill 1995 and they will be extended as we make an update.

Player will be able to prevent brakeup and save Soviet Union and eaven to win in the Cold War and spread communism.

If you have any questions you can ask them here or in my discord server: Discord.gg

None of the images are visible, except for the KGB one.

No One Can Beat You! Hearts of Iron IV
Related Games