Everything about Mini Combat including classes, gamemodes and more!

What is Mini Combat?


Mini Combat is a First Person Shooter. Choose a side, Red or Blue and kill the opposite team! Mini Combat is still very early in development so things, including the name, art assets and everything else will/can change.

Mini Combat requires an internet connection to play. The game also requires an online account which can only be created in-game.

The Soldier is packed with a fully automatic Assault Rifle and a super fast Tac9, perfect for sustaining covering fire and taking down targets at range.

The Soldier excels at medium to close ranges

The Sniper is a fast scout, perfect for taking down important targets at long ranges with her Sniper Rifle. The Sniper also carries a Mac10 for closer encounters.

The Sniper excels at long ranges

The Demolitions Guy is perfect for players who want to blow their enemies up! Rocking an RPG and a robust Shotgun, the Demolition Guy will definitely give his enemies a hard time.

The Demolitions Guy excels at medium to close range

The Heavy, a nasty shirtless brute who cares very little about others. Blasting his way through hundreds of enemies with his beastly M249 that holds 100 bullets and his Double Barrel Shotgun. Don't get on his bad side.

The Heavy excels at close to medium-ish range

From the deep edges of space, The Trooper is a Scifi inspired class that shoots lazers! The Trooper is armed with a Lazer Rifle and a Lazer Pistol to decimate his enemies. The Lazers are based on your team colour. As the lazers have travel time, this class requires a bit of skill to successfully land a hit on your enemies.

The Trooper excels at close to medium range

Rocking the most manly of mustaches, The Grenadier is armed with a deadly Grenade Launcher and a AEK rifle that packs a punch! Rain down hordes of grenades on your enemies and especially on The Demolition Guy. These two have some history, why don't you settle it?

The Grenadier is armed and ready for Mini Combat Alpha Test 2.

It's Red vs Blue. Choose a side and win! Each class in Mini Combat comes with a Blue and Red version of its skin, so you can easily spot your enemy and team mates!

In Death Match mode, the players no longer have a Red or Blue skin. Instead they have a camo skin, making it a lot harder to see them. Shoot and kill anything that moves!

In Zombies, players can play 2 zombie classes (melee and ranged) that fight with the blue team full of Mini Combat Characters. 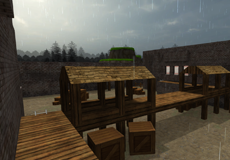 mc_bridge is a small map designed for a maximum of 8v8. There are two identical spawn buildings directly opposite of each other with a bridge in the middle connecting both buildings. Once players leave their respected spawn building, they cannot re-enter the building. There are also 2 sniper points located at either sides of the bridge, on the edge of the map.

mc_bridge is designed for TDM but we allow DM servers 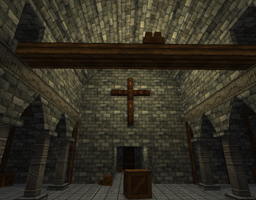 mc_church is a small map designed for players around 8v8. Players fight within an opened church/cathedral with walkways above. Filled with lots of crates to allow for hiding and sniping spots. 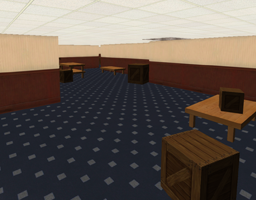 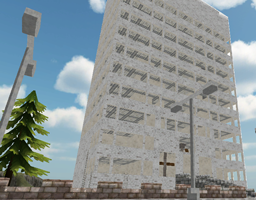 mc_city is a medium to large map which is designed for 16vs16 battles. Red team will spawn in a 11 story building whilst Blue will spawn opposite in behind and around a warehouse. Inbetween the tower and the warehouse is a street, littered with cars, containers, street lights and more

mc_city was designed for TDM but we also allow DM servers 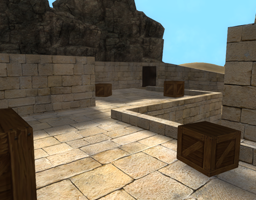 mc_desert is a medium map, situated in the desert as the name implies and is surrounded by vast mountains and rocks.

This map is designed for all game modes, Team Death Match, Death Match and the brand new game mode, Zombies!

Create your own servers, on the cloud
Hosting or creating a Mini Combat server could never be easier! Select your map, round time, game mode and press create! Mini Combat will never use your internet connection to host the server so you will not experience any lag when playing. Creating a server is totally free and will cost absolutely nothing.

Region free gaming
Connect to US, EU, Japan and the rest of Asia without having to make another account, all within the game client.