Beta 1.36 (Being Mineful) is now live on Steam! Minefields, Rules of Engagement, lots of new content and more!

Posted by Jumpdrive-Studios on May 5th, 2020

In 1.36 we did a lot of work on Rules of Engagement (ROE) and the various attack commands!

Wishlist us now at Store.steampowered.com

ROEs govern how ships react to enemies as they move through space. For example, attacking with the Berzerk ROE will ignore all incoming projectiles. And if you are attacked while in Defend ROE, you will defend against projectiles but you won’t shoot back on the attacker. While with Weapons Free your ship will fire on both projectiles and the attacking ship if attacked.

Now that ROEs work properly, we added more goodness. When you Protect a civilian ship, it draws fire away from the civilian ship toward the protecting warship.

We’ve also added a Support command. Supporting ships will fire on projectiles targeting the ship you are supporting, but won’t draw fire. This cleanly gives you the ability to dedicate ships to fending off projectiles while using others to concentrate on damaging ships.

Right now Support only works on warships, and Protect is restricted to civilian ships. Let us know what you think, should we expand these commands to work on all ships?

We’ve added a lot of tactical possibilities now. I’m delighted that it’s all finally working as designed. We went through a lot of events to try and make sure the improved ROEs work properly but there’s a good chance we missed some. If you see anything strange, please submit an in-game bug and we’ll get it fixed right up.

We also did a lot of work on mines. We have a new event action, layMines. Hmmm, I wonder if you can guess what it does? So we added a good number of minefields and minelayer-related events. Because you can’t have enough mines.

Remember that mines are now attackable, so if you don’t have an Empire Blockader in your fleet to minesweep them, you can blast them. You can now also use nukes to clear minefields. Scanning mines now works as expected. And to top it off, mines now make appropriately satisfying crashing sounds as they impact and explode against the hulls of their hapless victims.

A bunch of new content was added: The Barricade, The Minebait, The Layers, The Blockers, The Pecking, The Change, The Empire Blockade, The Blockade Runner, The Plan, The Fireteam, ROE Your Boat, The Protecting and The Picking. Trade and repair events were added for all factions, so you no longer see that Irenic trader in Empire space trying to barter with you. A number of events were also adjusted or improved.

And those events where farmships just jump away? They have all been refactored into quests where there’s a chance to get a farmship. The original idea was meant to help, but it just caused frustration. I’ve begun to go through some events with formations and tighten them up, beginning with The Irenic Convoy event.

Speaking of making things more understandable, with the use of our new weaponIsCharged condition and resetTrigger actions, I’ve begun to craft more early game ‘show me how the monster works’ type events. As an added bonus, these types of events only show up if you started the tutorial or asked for tips when you started your current run.

We’re starting to improve the visibility of major effects in the game. Relationship changes are the first of a few to come, and they look like this:

Starting a new game and melting weapons now pop up a sanity-preserving ‘are you sure’ type dialog. You’re also asked to confirm before trading ore for a weapon you cannot yet equip. Let us know if you think they should be in other places.

It is now possible to do crew rescues or cargo transfers to ships with only one hardpoint and no ordinary slots if you melt the weapon down first. Desperate times may call for desperate measures, right?

Using water cargo while the water riot timer is ticking down will buy you some extra time, depending on how much water you throw at the fleet and how badly you are in water debt.

More tooltips were added, including when you’re out of ore but trying to lay minefields, and when you cannot transfer cargo to a ship but want to use it to clear space.

A handful of tweaks were made to the UI to clean things up.

We created over 50 in-game test events to help expedite testing, and they are making a huge difference. We improved our logging as well.

In the unintentionally coincidental department, XO player cirind let us know on Discord that in a game he was playing on Easter day, a Harvester Investigator was destroyed… only to return three days later. We can confirm this is not an Easter egg!

Several bugs that prevented the jump button from working were fixed.

A bug with transferring crew in The AWOL event was made good.

A bug that crashed the game after trade was given no quarter.

Some issues with transfer and confiscate were fixed up.

A hold fire ROE given to a shieldship allows laser fire from within the (now off) shield’s range.

The fleet filter now works without having to scroll to the last ship in the fleet first.

The relationship change animation was adjusted not to play while dialogs were up, as it was too distracting.

An issue where you would lose water at the rendezvous was drowned.

A bug where you couldn’t transfer passengers from a frigate was undone.

Heru stopped a pretty nasty bug from locking up the Unity editor.

Hovering water was fixed up a bit.

The scan animation no longer plays randomly when issuing a waypoint order.

An issue with text being squashed in story mode was unsquished.

A few z-fighting brawls were broken up.

Certain animations no longer show up in ghostly form in the rendezvous.

The ‘unknown ship id error’ that was cropping up frequently was fixed.

When restoring a save game with zero ore, ore is now properly displayed instead of hidden.

Laid minefields were throwing errors, but that’s been fixed.
Minesweeping got a thorough overhaul.

Some cargoCount bugs were fixed.

Fixed an issue with the Rescue animation and some other animations.

A bug that was causing choices to grey out was fixed.

Hovering the battleship crew once caused issues, but no longer.

The rendezvous beacon no longer shows after it is reached.

A few dozen bugs not worthy of more detail were fixed, mostly related to combat and ROE. 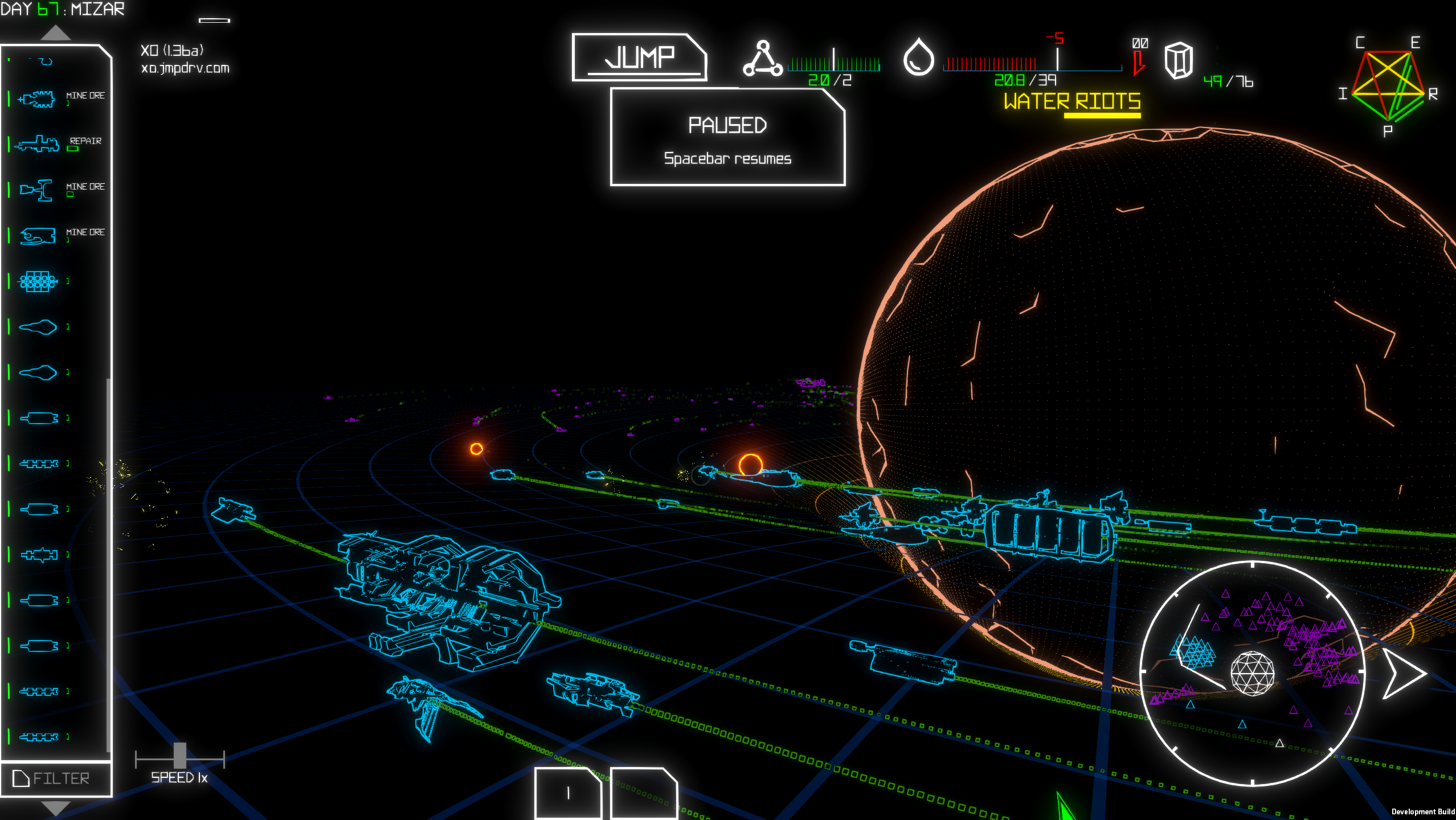 For Windows + Mac, none that we are aware of at this time. Find a bug? Report it in-game please!

When submitting feedback in Linux the game says “no Internet connection” but we still receive your feedback.

When alt-tabbing from the game in Linux, the sound can go wonky. Restarting restores sound to normal.