This is a rather small update, just some visual tweaks, nothing more.

Added weapon recoil, i.e. the player now leans back a bit while shooting:

(GIF converter dropped some frames, so this looks a bit awkward, but you get the idea :))

In previous Military Force version things like crates and barrels already produced debris on destruction
and the enemies produced gibs, but both faded away quite quickly. It felt a bit unsatisfying - you destroy something and a moment later there's absolutely nothing left of it, like it even wasn't there in the first place.

So I decided to add persistent debris and gibs. Debris/gibs still fade away, but not all of them, some of them
will stay there forever:

It's also interactable, e.g. when you walk over it, it's moved a bit, nothing gameplay changing though, this is purely a decoration:

So now when you're in a room full of enemies and stuff like crates/barrels and you use
your rocket launcher/proximity mines (or enemies use it :)) it's pretty fun to watch how debris and
gibs flying all over the place and there's blood everywhere and stuff...

Blaster uses particle effect for trails, but because of blaster projectiles are so fast, they're moved by more than
one particle length in a single frame (the game is in 60fps). This caused visually unpleasing trails like these:

i.e the gaps between particles aren't looking very nice. So I had to implement sub-stepping to avoid these, now blaster particles are calculated at 120fps, this gives much nicer effect:

While I was generally happy with how explosions look like in the game, one thing I didn't like is when
two or more explosions happen at the same time in a single place:

This "white blob" happens because of explosions use white light of high intensity. After changing it to be
a bit red and less intense I got this:

This looks a bit better.

I always liked how colored lights are used in SteamWorld Dig: 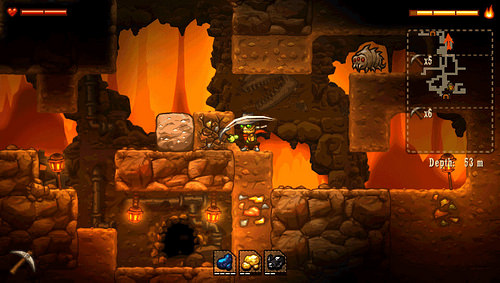 So I decided to give it a try in Military Force:

But something isn't right about this, it just doesn't fit into this game. Though being
a nice idea in theory, in practice colored lights are not always that good. Military Force does use
colored lights in some places, e.g.:

But sticking them into every single light source isn't such a good idea after all.

Shadows for characters and objects

Another visual improvement idea that I had is to implement shadows for characters and
objects, something like this:

Though it looks nice in some situations (like in that GIF above) in others it just doesn't fit. Especially
when characters use lights themselves. So for now I decided to drop this idea, m.b. I'll come back to that later...

So, that's it for this update. As usual, I'm open to comments/suggestions, you can leave'em here.