An unexpected recap about the new features added in the past three days. And oh, boy.. it's quite the list.

Hi all! I've been doing so much stuff in the past couple of days, that I wanted to share it all with you right now. There have been quite some new additions, and putting all of that within one single recap would result in a massive article, which no one is ever going to read.

I'm not going to share a video today (even though there are many features to cover), simply because I don't have much time (it's a bad excuse, I know), and because I would have to cramp SO MUCH stuff within a 2 minute video.

So, here's the changelog instead:

It's... quite the list, especially when you compare it to the one of the previous weeks.

Let's go over the most important features, one by one.

Converting pawns to other pieces

A big thing are the new chess pieces. I've added a bishop and a rook, which both have unique properties, movement, etc.

Below are some *.gif's which demonstrate the bishop:

You cannot spawn a bishop, however. You need to train a pawn to a bishop instead. You do this by using new pieces of furniture; The bookshelf. Each bookshelf will slowly increase the intelligence of a pawn, until it reaches a particular level. If this level is reached, the pawn is converted into a bishop.

You can see how the upgrade process works down below:

Note, that the house already contains a bookshelf inside.

You can also use another new piece of furniture to convert your pawn into a rook. This piece represents a weight lifter, which allows your pawn to train it's muscles.

Here's an overview of all the new furniture: 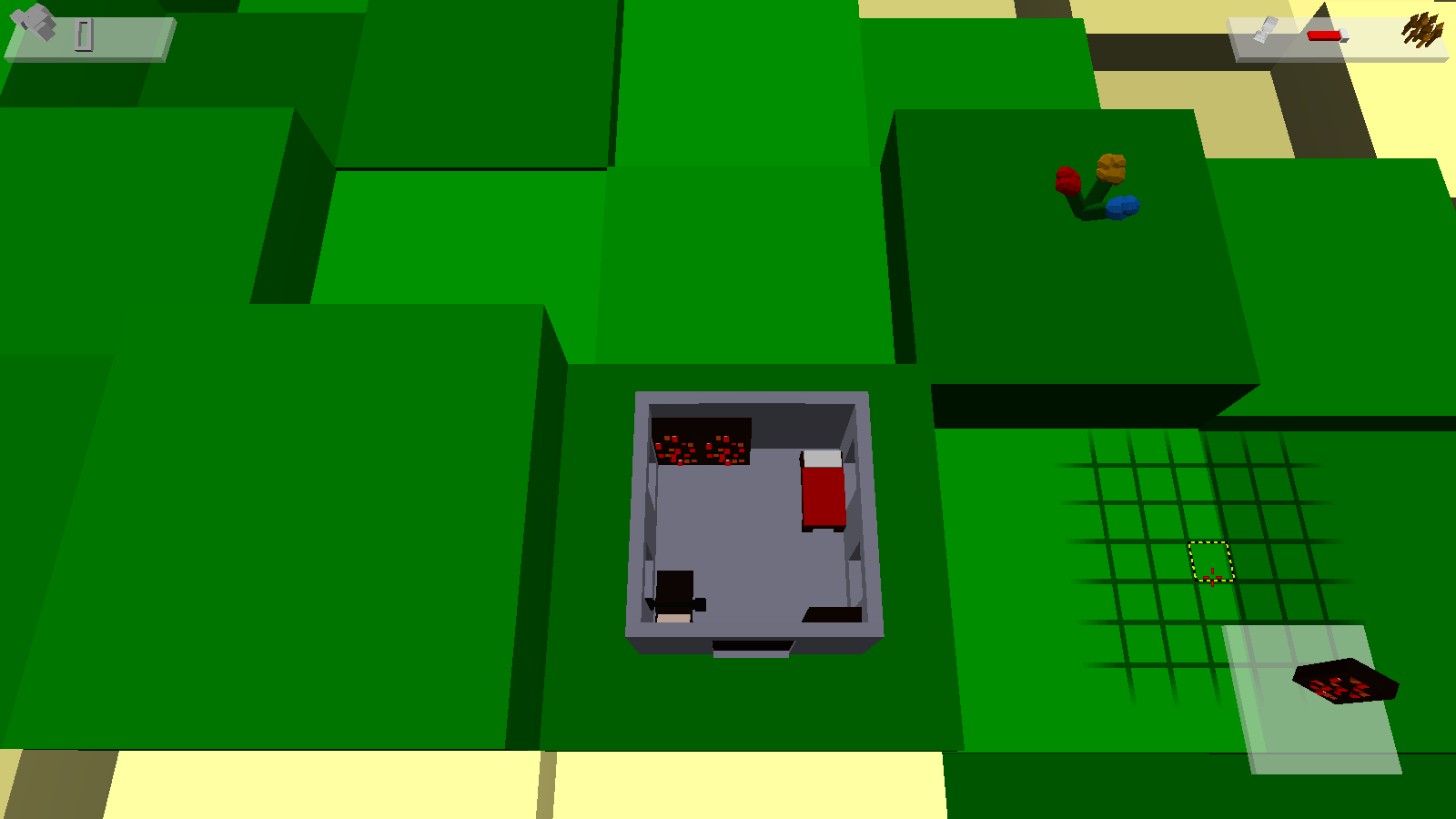 You can see the bookshelves in the top-right corner of the building, and the weight lifter in the bottom-left corner.

I've reworked (or rather, finalized) the way the towers work. Previously, you could only build towers within your borders, and it would instantly claim the land around it. This can become quite overpowered as long as you have plenty of ore at your disposal, so I decided to move things around a bit.

Below is a demonstration of this new system:

As demonstrated (rather slowly), the tower is placed anywhere you desire (but will still cost you a bunch of ore, obviously). You then, need to train a rook, which needs to claim it's spot onto the tower. Only when it's onto the tower, it'll claim the land around it.

The reason I chose for this method, is purely for design. The current situation will require you to train a rook and put a lot of effort and ore into claiming a bit of land. If you claim some land nearby you, this won't cost you much. If you claim it around the enemy team, the enemy will easily be able to take down the tower or rook before any of them get there.

Rooks move pretty slow (1/3x the speed of a pawn), so a pawn could easily catch up and murder it before it even has a chance of getting to that tower (especially since the pawn can attack diagonally, which gives it a big advantage). You can imagine that a bishop can do even more damage here.

I've also revised the farms. They now have their own model, and are no longer part of the workhut. Therefor, the "workhut" has now become the "mine".

Below is a *.gif of the new farm model.

Note that you can now also destroy the farm (which you previously weren't able to do). This also leaves the ground coloured, which will probably have some negative effect in the future (e.g. diseases which spread from unworked land).

In case you don't have access to a water tile nearby, you can decide to build a well instead. The well model has been in for a rather long time, but didn't have any proper purpose, up till now.

Wells have the advantage that you can farm anywhere you like, however, they do cost more ore. And, of course, if your farm gets destroyed, you don't want to have a bunch of unworked land due to the negative effects it will have in the future.

I've also re-done a couple of models. I didn't take many snaps of this, so you're going to have to do with this one: 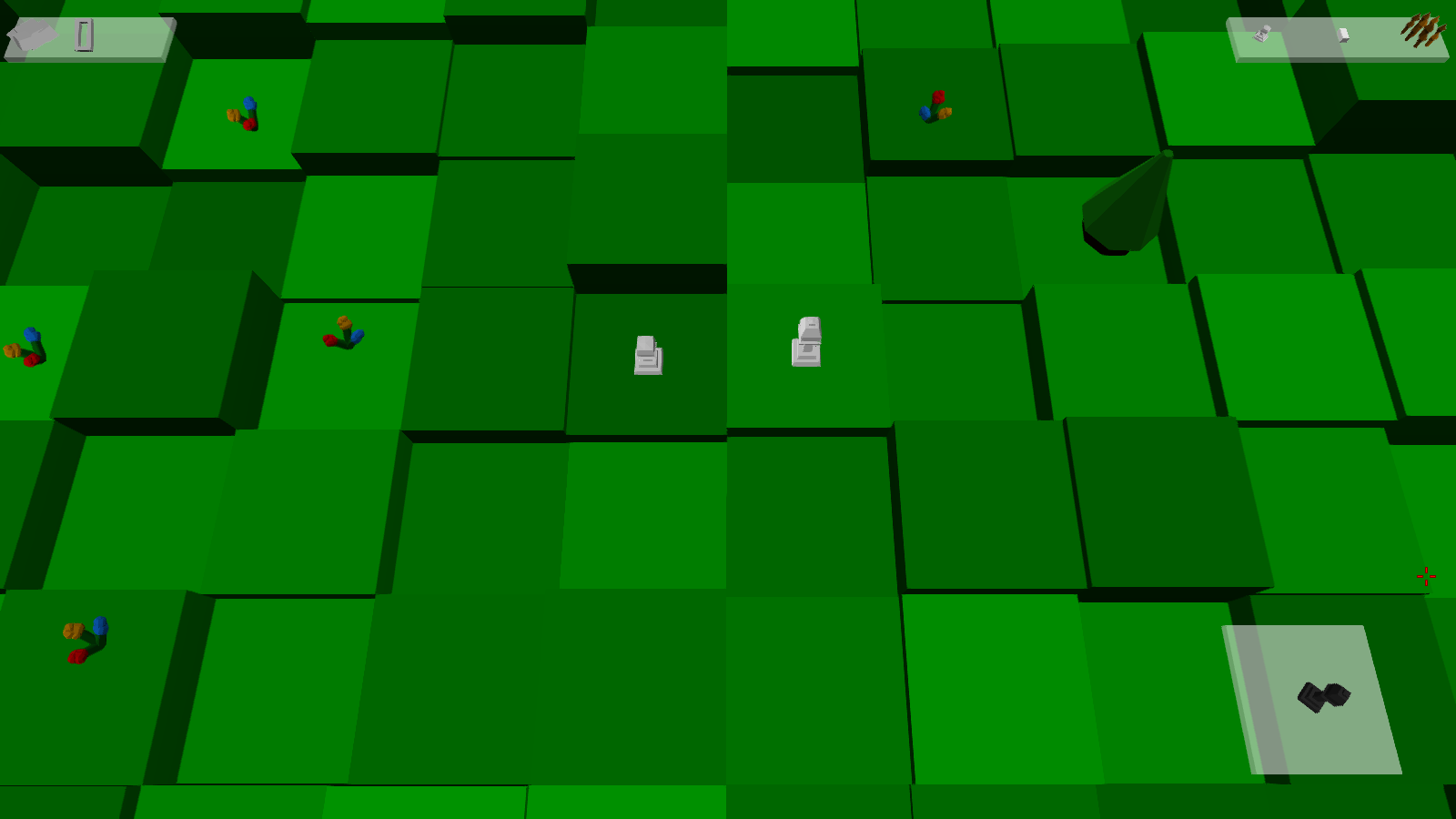 Long story short: Pawn neck decreased, added an outer ring to the pawn's neck, rescaled all pieces to be larger (not shown in this image) and adjusted some GUI elements which used the pawn model.

I've also repositioned the smoke on several buildings, resized the furniture bed to properly fit within the grid squares, swapped the normals of some faces (which previously rendered them invisible by accident) and rescaled some GUI in general.

And, finally, I've reworked the building selection GUI. This time, I really saved the best for last, because it looks so much better now.

Below is a small demonstration:

And what about all the other stuff?

There's a bit more stuff I didn't care to cover here, so have some random pictures of things I didn't cover: 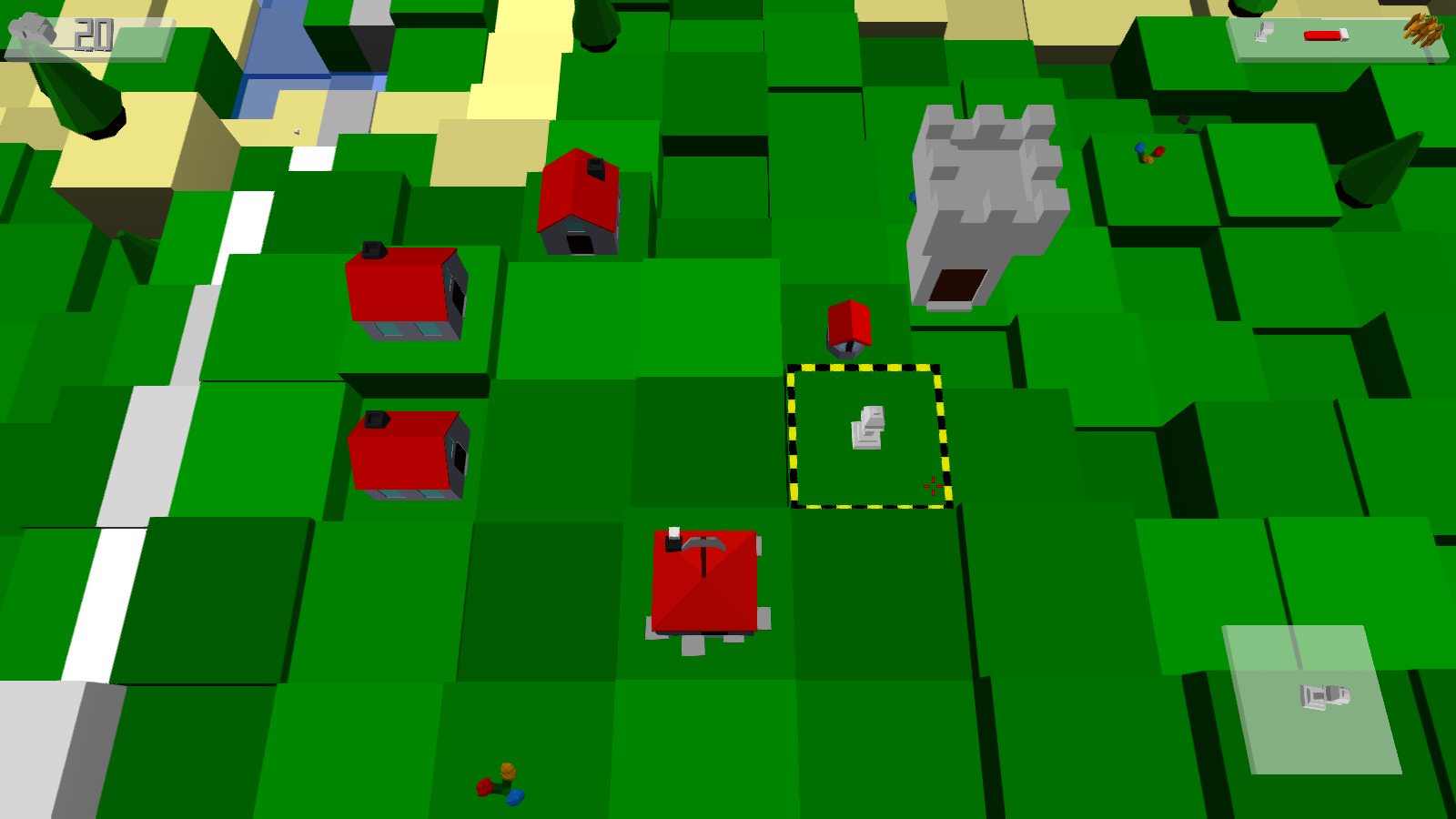 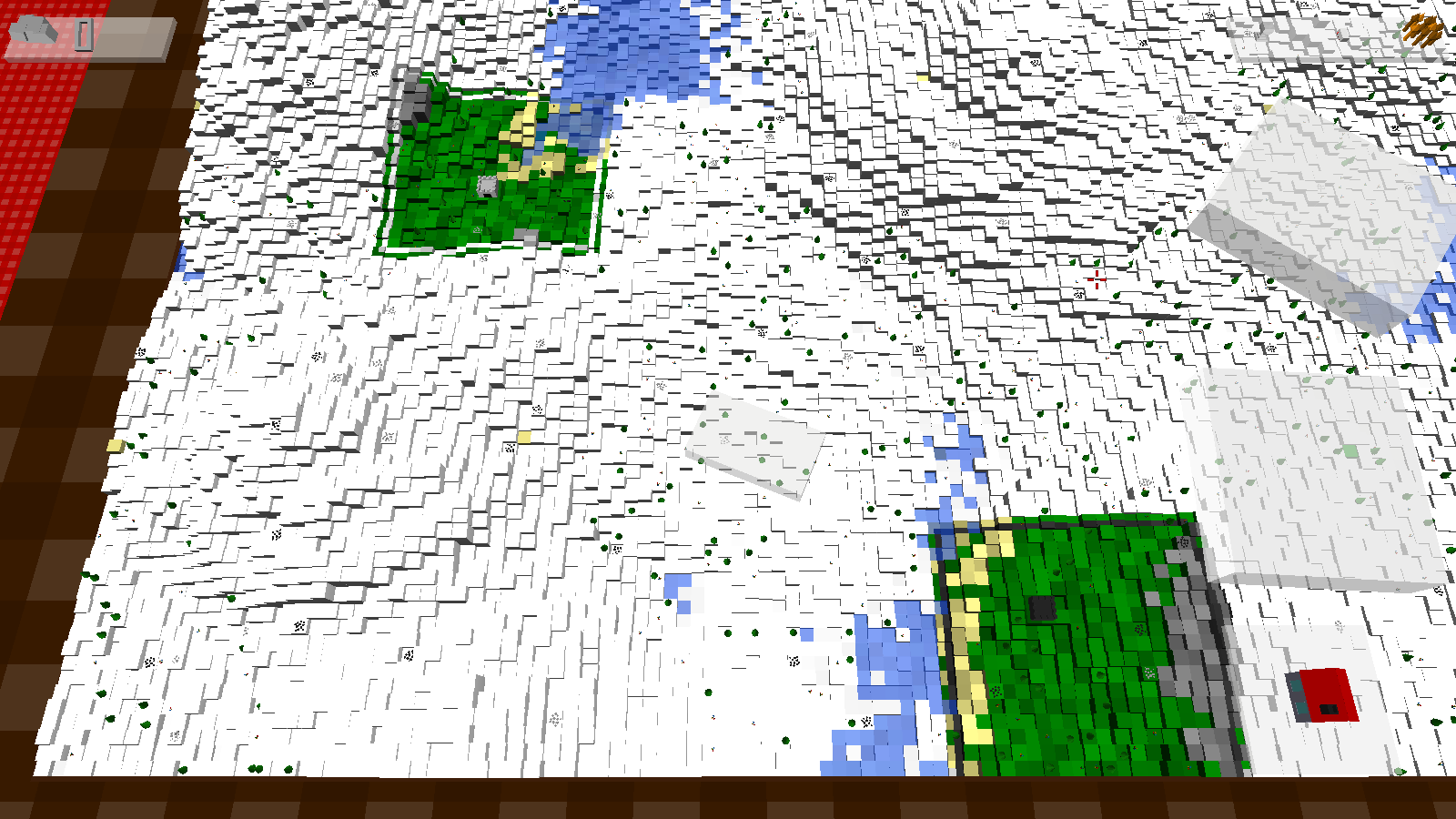 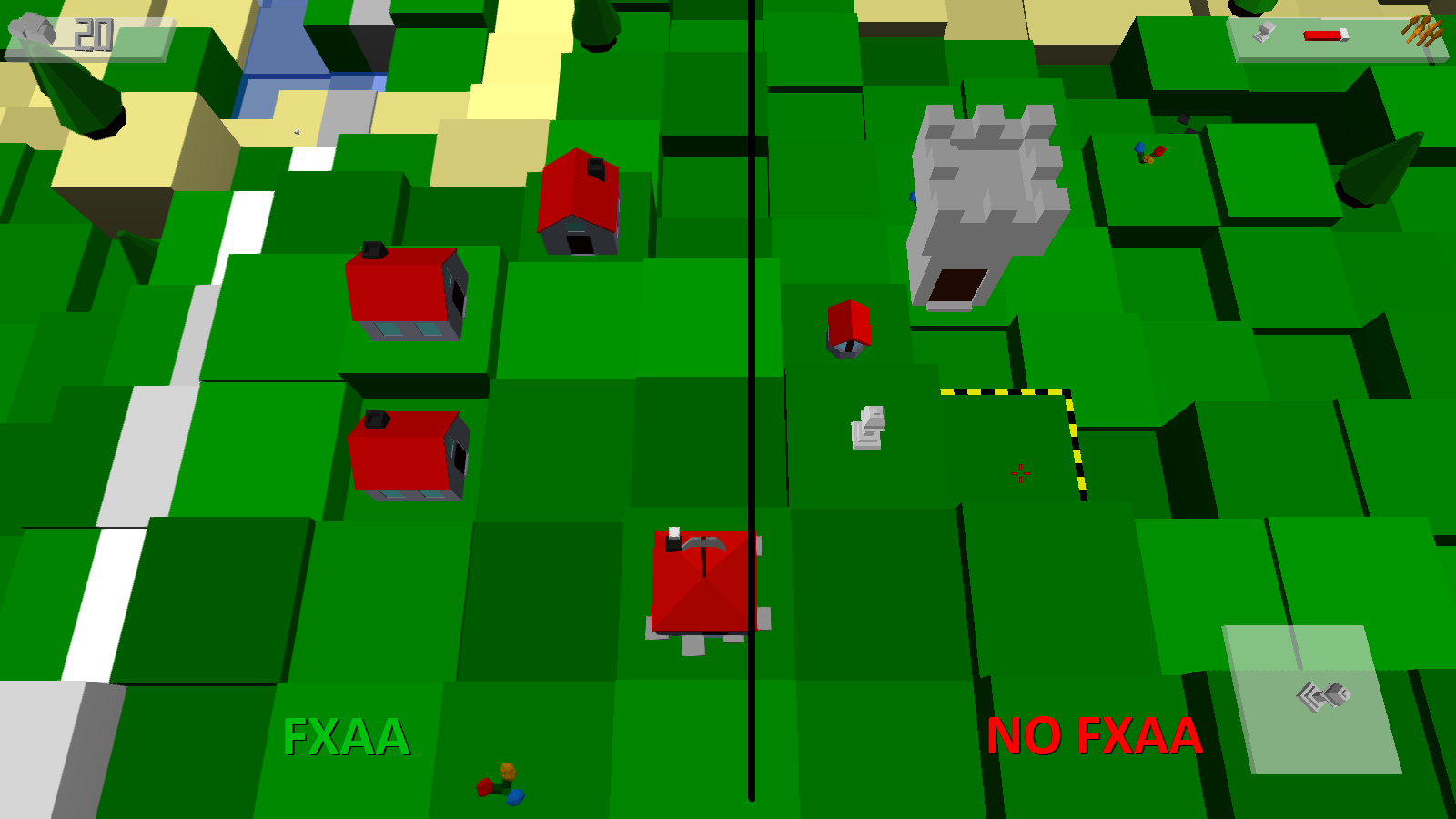 Can you spot all the new things?

In the contrary to what I've said last week, I'm not going to work on the AI yet. I first want to finalize the mechanics of one side of the party, before moving on to something which is quite big. Also, I don't want to find out after I added in the AI that I missed something, which requires me to redo a lot of the AI. That would be quite a waste of time...

I'm also going to try to up the graphics a little bit. I've already made a small step forward with the FXAA addition (which is a specific form of anti-aliasing; it smooths edges), but I've got many things planned. For example: Water reflections and simple shadows.

I'll see how much I'll get done of those, since they are quite difficult for a simple minded indie like me (and especially if you need to write them by hand), although they shouldn't be all too complex. I'll see if it becomes anything interesting...

Have a great week, and see y'all Saturday for the next update!