Megabyte Punch is updated! Again! As fitting for an update in Beta, lots of fixes and tweaks next to a lot of minor additions.

In this update, we've added a little home in the village which contains your part collection and all the colors you've collected in a similar interface. Also nice are the Doro portals that appear in co-op adventure mode when fighting inside a closed room, which allows your teammates to join the fight from the outside. 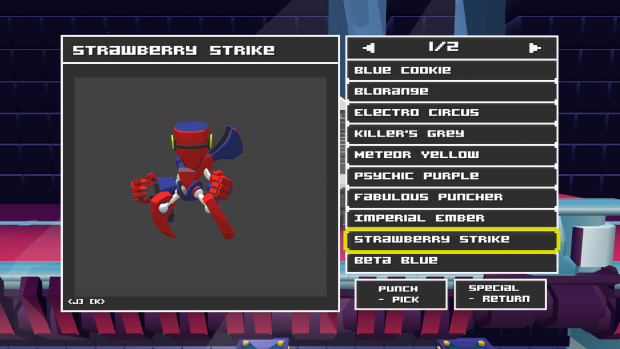 One of the minor additions is a standard forward ground attack. Previously, doing this just gave the neutral ground jabs, so it will certainly take some getting use to. It can however be very useful as a quick follow up and even as finisher on high damage, so please give it a shot. To allow more actual combo's (as in a sequence of hits during which the opponent cannot escape), we've increased the duration of stun by hits and decreased the gravity and fall speed while stunned. We'll still need to add certain speed enhancing and combo breaking techniques later on, but it's a start. Shield mechanics also changed, removing the shieldbreak knockback, keeping the shieldbreak damage, adding shielding and stunned animations.

There really are too many small changes to discuss, so I suggest just trying for your self and maybe you'll discover something new. Remember that nothing is final yet, but we still like to know what you think! 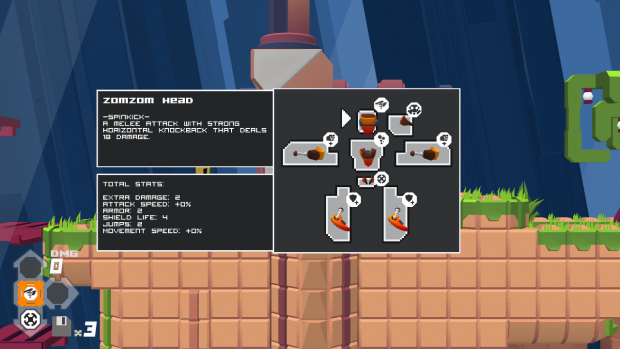 General fixes and changes:
+ Added co-op fight Doro Portal
+ Added little voice sounds for NPCs
+ Added 'Parts' submenu in inventory to see your current parts, abilties and stats
+ Added a home!
+ Added a color selection gui and with that, names for the collectable colors
+ Added a new idle animation for NPCs
+ Added a shielding animation and shieldbreak stun animation
+ Added unique ambience track for Frostbyte Deep and Binary Fortress
+ Added attack speed as a new stat, increasing speed of all standard attacks (can be found on the unknown head)
~ Parts of Ventu Village redesigned, colors and collection can now be found in your own house
~ Changed stage 1 of level 1 to have a more clear direction and added trigger fights
~ Visuals of Subprogram deadland are updated
~ The inventory is slighty redesigned
~ The R.A.M. Leg, Zomzom Leg and B-Chipset Leg now give armor plus instead of movement plus
* fixed inventory showing up on other splitscreens
* Fixed dropping in one block width holes
* Fixed some stunned animations not triggering
* Fixed the virus immunity description
* Fixed some broken hurtboxes
* Fixed walljump sound
* Fixed damage reset bug in tournament mode

the game will be better, thats great - mostly happy frOM inventory changes :)

That should do the trick.

Whenever I touch a wall I turn around... And I used to use special+up with a direction, and it would use the special+up ability, now it does the special+side... But the rest, is amazing. I really like the new subprogram deadlands visual update, the skeleton wearing headphones made me chuckle. The new color change feature is incredible! The names are actually my favorite part...

how do you update if you got the green light bundle?

Use your provided Desura Key to get the latest version here. Secure.desura.com

So if I haven't bought this game from you,does it mean that I can't get the update from you?: (

Did you buy it in a bundle?