Heroes are the focus of the game, and today we want to introduce one of the 3 heroes we're developing for MoAR. 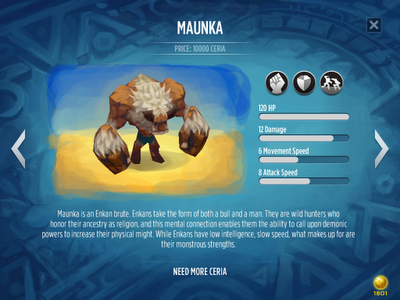 Maunka is a melee tank hero. A tank hero has high survivability and can withstand large amount of incoming damage. Usually when spotting a Maunka on the opponent team, you'll want to avoid targeting him first because by the time he's about to wear down, your team is likely to be terminated already.

A tank doesn't mean he can't do anything else. Maunka can deal just as much damage as he can take it. He is extremely dangerous with his sudden burst of speed and destruction.While each hero is restricted to equipping only 3 abilities to combat, they all have a maximum of 6 available abilities for our first release with one of them upgradeable (Rage to Demonic Rage in this sense). 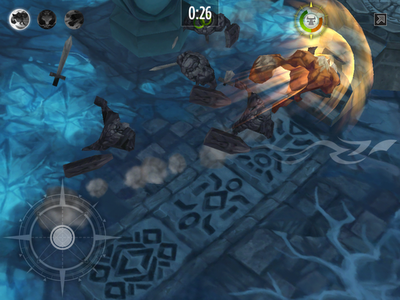 For an Arena match, Maunka's strategy relies on one consecutive successful executions of 3 abilities. For example, against a range hero, Maunka would first Charge immediately to reduce the kiting distance, immediately follow with a Slam. At this point, the opponent HP would be drastic reduced and is now slowed. Maunka can now summon his Frenzied ability, and deal the next 4 attacks in an instant. With the Rage buff, he can chain 2/3 of the above combo without taking a break.

Dominance is his survival ability against the enemy AI. When faced with multiple enemies, Maunka has a way to live. He swirls around and damage everyone around him dealing massive damage healing himself with each successful hit.

In all, Maunka is a high surviving hero with very slow speed, but what makes up for is his sudden burst of monster powers. He makes a great ally but becareful if you see him in the opposing team.