Masterspace v1.6 has been released, introducing a new user interface as well as several new features and bug fixes. Among the new features are the additions of different types of plants, transparent glass and an urn for storage.

Posted by MasterTechnologies on Oct 6th, 2012

Masterspace v1.6 has been released, introducing a new user interface. The production and object construction screens have been redesigned to include a lot more information and most object descriptions have been extended and updated. Additionally, the old inventory icons have been replaced with new icons with a consistent graphical style. Hopefully, this effort will make it easier for new players to become familiar with the game. 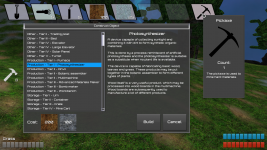 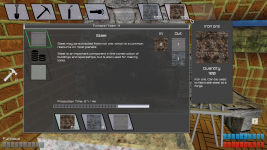 The inventory system has been revised and is now limited to 8 slots, each capable of holding up to a maximum of 200 items. These limits may be customized for the scenario by scripting. This introduces the need for more storage containers, as well as introducing logistic problems. To solve storage problems early in the game, a new storage container, the urn, has been added. Urns are constructed from dirt and have 2 storage slots. 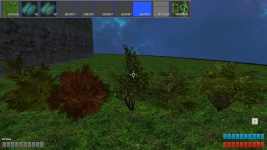 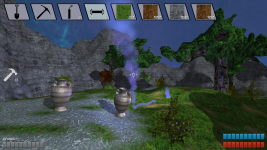 The scenario scripting has been greatly improved by the reimplementation of the planet generation functions in LUA script. This means that customized, random planets may be generated specifically for each scenario. A testing ground scenario has been added, demonstrating work-in-progress features, such as meteorites and rain. Also, multiplayer games have been simplified by automatic transfer of save games and scenarios. 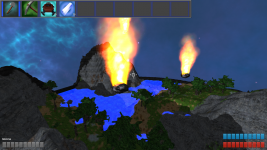 Finally, the demo limitations have been changed and, as of this version, both saving and loading of save games and scenarios is enabled in the free version. Instead a demo reminder popup has been added, appearing every 5 minutes.

This version partly breaks compatibility with save games from older versions. This will (hopefully) not cause any crashes, but constructed items may disappear. Primarily, steel forges and stone cutters will not appear, as they have been renamed to furnaces and multimachines, respectively.

This may be solved by editing the save game file and manually replacing the old names with the new ones. Also, problems may arise from the introduced limitations in the inventory system, and any number of items above 200 in a slot will be removed.