I finished a demo for the campaign mode, which has a levelling system, npc dialogue and other functions and improvements.

Campaign mode
The main update is the introduction of the campaign mode. You start in the hub map, where you can interact with NPCs, level up your stats, and accept missions. Right now the hubs are pretty empty, but they will be populated further in upcoming versions.
The main part of the Campaign is the missions. They are similar to Scenarios in the Scenario mode, but they follow some sort of narrative. You accept missions by talking to one of the respective NPCs.

NPCs that give you your first missions.

The Arcanum mission involves travelling to the Necropoleis, the accursed undead lands to the north, beginning your search for a rare and precious Phylactery.

In the Melkirion mission you lead a small force in clearing out a nearby town that has been overrun with undead.

Each mission will challenge you and become gradually harder, allowing you to gain experience and levels to increase your stats. You are unlikely to beat one of the missions on your first try. 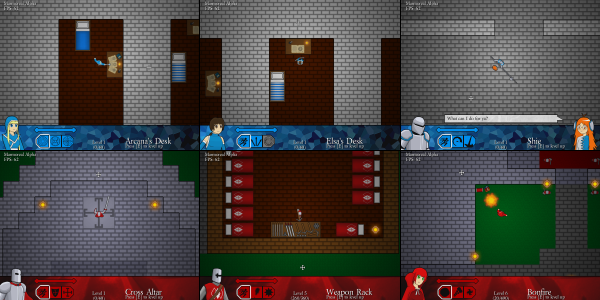 Levelling locations for each character.

There are three attributes you can spend your points on: Health, Attack and Ability.
Health increases your HP.
Attack improves your damage.
Ability reduces ability cooldowns.
Later on, each attribute will give you perks for every five levels, but these are not implemented yet.

Additional updates
There has been a variety of gameplay tweaks and rebalancing, as well as adding sound effects and giving enemies new death effects.
The new sound effects are sounds for Arcana's bullets, and Arcana's and Fiera's attacks being blocked by enemies.
The death effects include making skeletons explode (or break off) into pieces upon death and making ghosts fade away when they die.
The skeleton's pieces fly off until they hit a wall, or in the case of swords, until they hit an enemy, which makes the piece damage the enemy like a projectile.

That's all for now, folks!