Post news RSS March Update! How You Can Help Us + Airship/Endgame!

Phew, I’m cutting these monthly updates a little close, aren’t I? They seem to come around so fast! This time I cover our recent progress, the player's Airship hub, tease some optional endgame content, & explain how YOU can help 8-Bit Adventures 2 on Steam!

Phew, I’m cutting these monthly updates a little close, aren’t I? They seem to come around so fast! XD This time I want to keep everyone abreast of what’s happening and tease a few new aspects of 8-Bit Adventures 2. So let’s get into it!

The Month That Was…

Okay, so…this past month has been a really rough one for me. I don’t want to bother anyone with my own problems – that’s definitely not why you’re here - but there have been a couple of personal challenges this month that have been quite…well, challenging. And I found it pretty difficult to maintain my usual output and creativity while dealing with them. That’s not to say I’ve been wasting time, though! I’ve been working consistently, just not with the speed or energy that I wanted to bring into this month.

Consequently, while I’ve made solid progress on the game, I haven’t made as much as I’d hoped. So I apologise for this and hope to have a lot more for you all in April. You’ve all been so patient, and I can’t begin to tell you how much I appreciate it! I’m back on the horse now and ready to leave March behind!

On the brighter side, Jerram (the artist) is back at work finishing up the remaining graphical assets, and he’s almost completed all of the cinematic shots. Most recently, we’ve been working on the ending shots – basically the last 30 seconds of the game – and really trying to get it right, so that we leave the player with a scene they’ll always remember. I unfortunately can’t show any of his recent work without major spoilers, but he’s doing an amazing job. I can’t wait for you to experience the final third of the game!

In case you missed it last month, though, you can see some of his beautiful pixel art on the newly revamped 8-Bit Adventures 2 website! 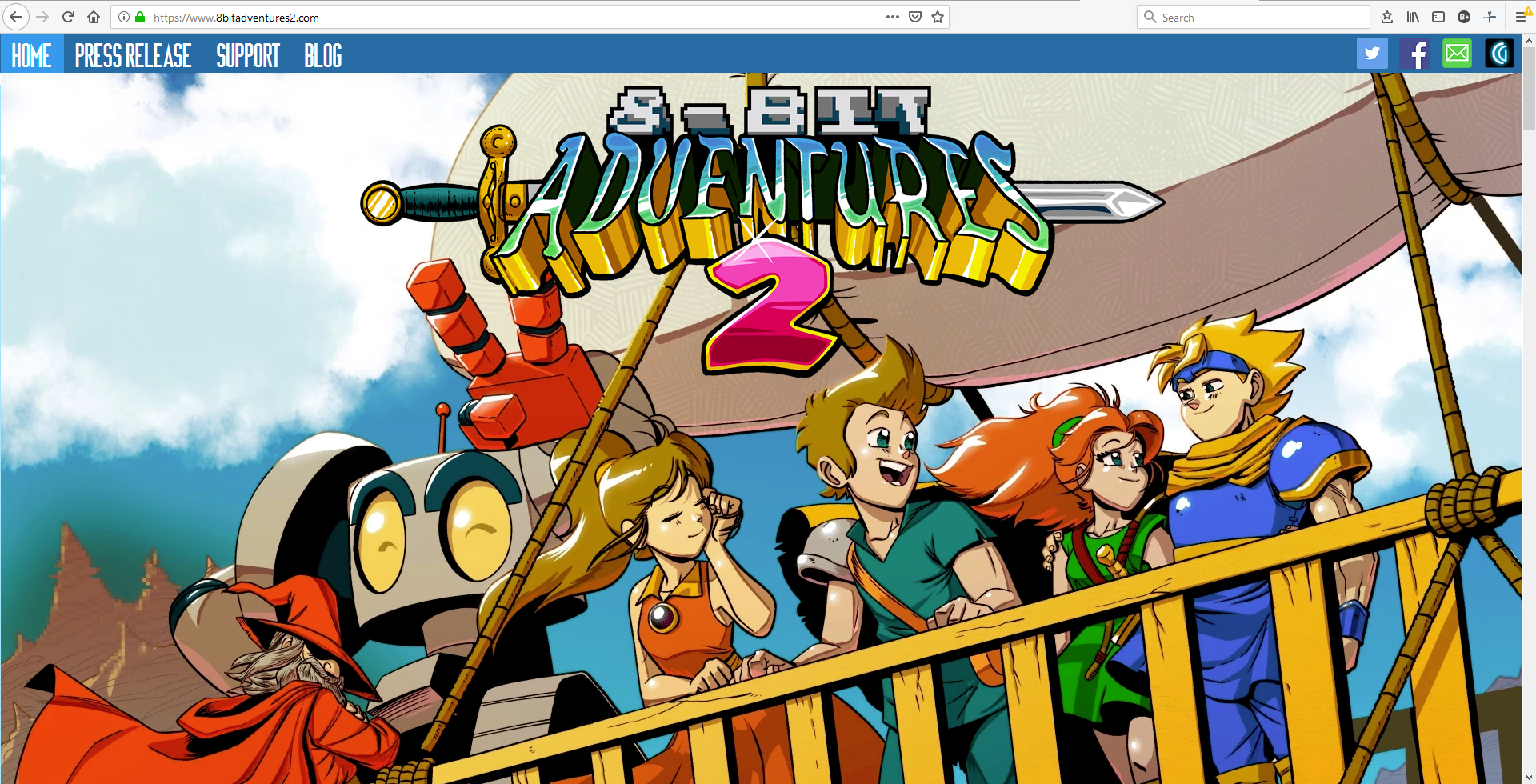 In a similar vein, Sebastian has been working hard on the last few songs for the soundtrack – predominantly scoring a handful of cinematic sequences. I love the emphasis this brings to certain moments, and I feel like it will truly make the game feel complete.

What Can You Do To Help?

Tl;dr – Add 8-Bit Adventures 2 to your wishlist, tell an RPG-loving friend, or give a shout-out on social media (with a mention of wishlisting the game). Thank you!

While I don’t have a problem with adult content being on the Steam store (and I’m certainly not judging the quality of those titles), a quick look at the Upcoming page in the JRPG section shows that 8-Bit Adventures 2 is completely surrounded by titles with a Sexual Content or Nudity tag.

While I don’t feel my game is directly in competition with those titles, the way that Steam is set up means that I have to fight even harder for visibility than I did in prior years – and there’s really not much that *I* can do on that front. Of course, I’ll be trying to publicise my game as best I can on the wider web, but Steam provides few options.

If you want to support us prior to the game’s release, the most helpful thing you can do is to add 8-Bit Adventures 2 to your Steam Wishlist.

The more people that add the game to their Wishlist, the higher the possibility of 8-Bit Adventures 2 appearing in the ‘Popular Upcoming’ section on Steam’s front page. If you’ve already done so and still want to help, maybe consider showing the game to a friend who loves RPGs and might be interested, or giving a shout-out to it on social media.

The game is currently sitting on over 2,700 people’s wishlists, which is utterly amazing – honestly, it’s more than I’d ever imagined! But in the current system, it seems that to gain any visibility on Steam, we need more people to support 8-Bit Adventures 2.

With that said, please don’t feel an obligation to do any of this. I just wanted to make it clear that, if you’d really like to help us, then this is the way to do it.

If you’ve added the game to your wishlist, supported us in any way in the past, or are just reading this update right now – THANK YOU! It’s honestly hard to express just how much it means to me when players take an interest in something I’m working on – especially given just how many amazing games are out there. You guys definitely help keep me going, and we’re all working hard to make a game that lives up to expectations and provides the kind of experience that I hope, as fellow RPG fans, you will love!

Steam may be a difficult environment at the moment, but with your help, I know we can make 8-Bit Adventures 2 a success here!

The Airship – Your High-in-the-Sky Home!

Once you gain your own personal Airship, it serves as a sort of mobile hub. Much like Final Fantasy III or VI, all you need is the push of a button to find yourself in control of Charlie on the deck of the Airship – at which point it’s able to be fully explored. While there aren’t any secrets of treasures to be found, there are several utilities.

Firstly, you’re able to talk with party members – gaining more insight into their thoughts on recent events, as well as a greater sense of their personalities.

There are also some handy merchants available to sell you whatever Items and Equipment you require; no need to backtrack to a town!

And finally, you can always take a snooze cruise in a nice comfy bed and heal up…so long as you don’t mind the noise of the engine too much!

Yes, it’s your home away from home, and sure to make the wealth of exploration and endgame content you’ll experience more convenient than ever!

Speaking of optional, endgame content, here’s a little tease for what’s in store…

Explore a mansion that requires you to jump back and forth between time periods; a ruined jail littered with the remains of corrupt robots; catacombs filled with horrors beneath a once thriving fortress town; an inter-dimensional arena where defeated monsters are given the mantra ‘dead, but not deleted!’; a sunken cavern where you must dive beneath the waves to hunt a deadly beast; and much more!

For those that have played a lot of RPGs, 8-Bit Adventures 2 is the kind of game where, after the credits, you’ll be able to save the game and pick up from right in front of the final boss. So you can choose to either complete all of the sidequest content beforehand, or revisit it after you’ve seen the credits.

Personally, my recommendation is to complete the sidequests prior to visiting the final dungeon (that’s just my completionist tendencies haha), but the game will accommodate both approaches. And much like the first game, a little bonus may appear in the world after the credits finish rolling… ;)

I'm very sorry if this update was a bit of a letdown. I'm grateful to be leaving March behind and I'll do what I can to make next month's update a little more exciting!

Thank you all so much for your continued support; it means a lot, even when I'm in mostly silent running! If you ever have any questions or want to get in touch, feel free to contact me on email (criticalgames@tpg.com.au), Twitter, or post on one of my games' forums here on Steam.

As I said last month, from the start, my goal has been to make a product with the soul of a classic RPG; a game for everyone who grew up with and loves the genre. And we're all doing our best to make that a reality =D

In my off time, I've also been working on an article analysing the narrative of Kingdom Hearts 3, so anyone that enjoys RPG design theory might like that! I'm also planning to write something about 8-Bit Adventures 1 and consequently leading into 8-Bit Adventures 2, so if anyone's interested, I'll post that in a future update. Hope you have a great end of the month!

Thank you very much kopstein! I try to write these as honestly and earnestly as I can haha, so your kind words are much appreciated =)