In the past, Didgery seemed to be the type of game that lacked mass appeal. I didn't like at all like this, so, for the past month, I have been redesigning Didgery and systematically removing barriers. The result is a streamlined game that looks and plays significantly better.

Over the past month I have been spit-shining Didgery for the Desura release. As the feature additions and bug-chasing winds down, I thought it would be a good idea to highlight some of the changes that drastically improves Didgery as a game.

One of the first things a veteran player of Didgery will notice is how much better the game looks. The core game art has been redone to be more pleasing to the eye. I wasn't actually planning on redoing the core game art to be honest, but language barriers caused the Elance contractor I hired to absolutely misunderstand that I hired him to make BoxArt. He instead remade the GameBoard and Deck images. It looked good though, so I just rolled with it. I personally think it looks a lot better than the vague western-style programmer art that existed in the previous iteration of Didgery. 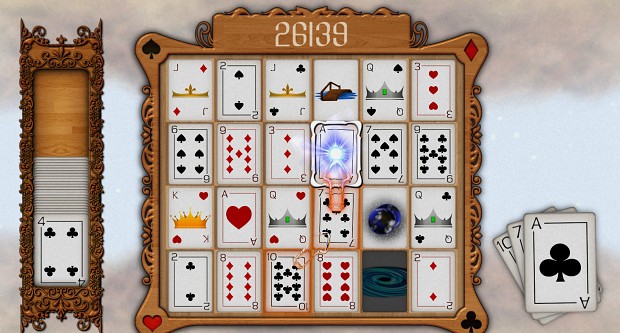 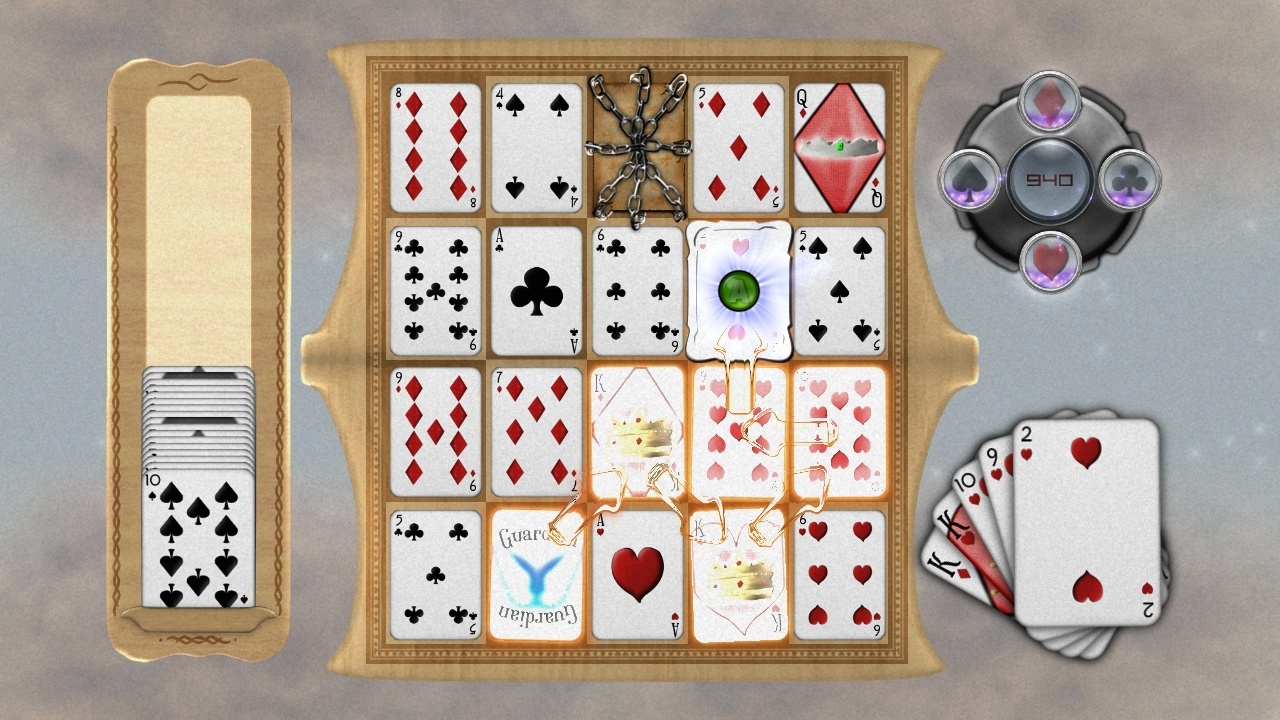 Another major issue I have always had with Didgery was the visual design of the cards. They just didn't feel right to me. They looked very shabby and rough. Given that the cards are central to the game, this was clearly a big problem. So I fixed it. I fired up InkScape and played around for a half an hour or so and made some solid designs. I then spent two days improving my Card Texture generator. The result was, as you can see above, drastically improved card visuals. Notice how much easier it is to tell the face value of the card. Even the suits are much easier to recognize. This reduces the work that the eye and mind must do to play, which, in turn, makes Didgery a more relaxing game.

An interesting side-effect came about from having the GameBoard redone: It redesigned some of the core gameplay. I was reviewing some work from the contractor. I wasn't all that happy with the Holy Mantle he had built, when suddenly, it clicked: I could make the GameBoard the HolyMantle. It made so much since that I had no choice but to implement it.

The first major advantage of merging the HolyMantle into the GameBoard is that it allows the score display to be much, much larger. Compare the two images above again. The score on the top image is easily visible, but it takes some eye-squinting to read the score in the second. The second major improvement is the real-estate it frees up. With the Elemental Mantle gone we can make our gameboard 6x4 or even 7x4 if we want. I finally settled on a 6x4 gameboard as the default. In comparison to the 5x4, it allows for more expressive chains, and is, in my opinion, a lot more fun to play.

The last change I made to the gameplay seems somewhat minor, but it makes a huge difference in practice. Didgery was previously segregated by levels. You got a deck, and you played until the deck was empty. Once the deck empties, the board clears, a stats screen displays, and a new deck is dealt. All of these obstructions have been removed. Game play is now infinite in nature. When the deck empties a new deck immediately comes in. Everything is just one huge play session, and it is lovely.

It was a mistake for me to have ever released Didgery without a Casual Mode of some form. The esoteric gameplay elements of Nightmare seem to turn most people away. This has, finally, been remedied. Zen Mode is built so players can relax, strategize, and build awesome chains of cards, all without the pressure of impending doom, skullface, or time-limits. In fact, Zen is now the default game mode in Didgery. Only by playing Zen and becoming familiar with the gameplay can you unlock the much more advanced Nightmare Mode.

I had never realized it much before, but Nightmare Mode is similar in ways to an RPG. You have your Health Points (Harmony Points) and you battle, sort of, this malicious entity. Its more soft and indirect though. There is no spell casting or sword swinging (yet!), but there is strategy and large card explosions. Making chains of cards restores your Harmony Points, and the curse constantly drains it. The longer you play the faster the Harmony drains. You never win in Nightmare Mode, you just survive for a duration. The longer you survive, the more skilled a player you are. 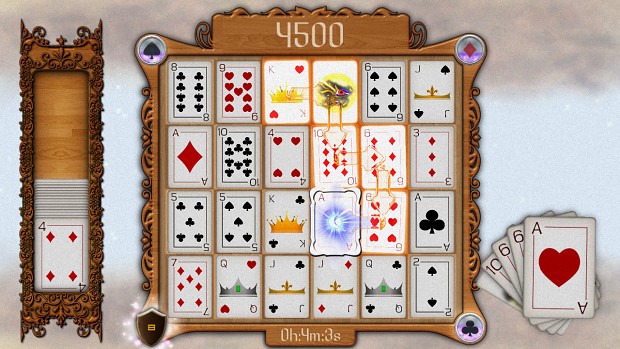 Before last month this WAS Didgery (minus all the new graphics of course.) It wasn't casual, despite appearing that way at first glance. I think that is why many people were turned off after playing it for a bit. It starts off with happy clouds and relaxing music and gradually descends into demon groans, thunder claps, and, eventually skullface. One improvement I made to Nightmare Mode was make it explicit that the goal is to last as long as possible. This was accomplished by placing a timer at the bottom of the GameBoard. I plan to make global leaderboards using this time value. Should be fun!

One of the gripes I had with the original Didgery was the sucky eight minute tutorial that failed to teach the player anything useful. It is now a show-by-example tut that lasts around the two minute mark. Not only can the player learn how to play, but they can do so much more quickly. 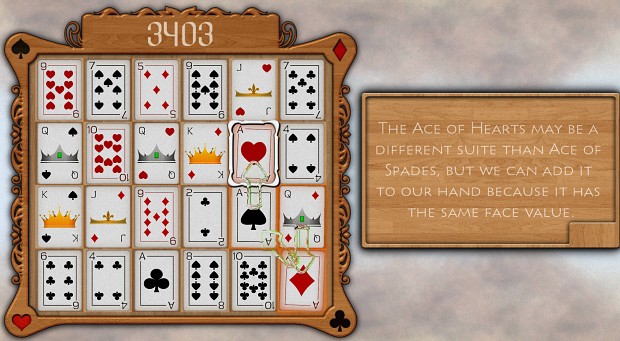 The Instructions Screen (accessible via the Escape Key) were also largely redone. Static descriptor images have been replaced by real-time visual examples. This is especially useful when attempting to explain how to use a newly unlocked special card. It's much easier to understand when seeing its use in action. 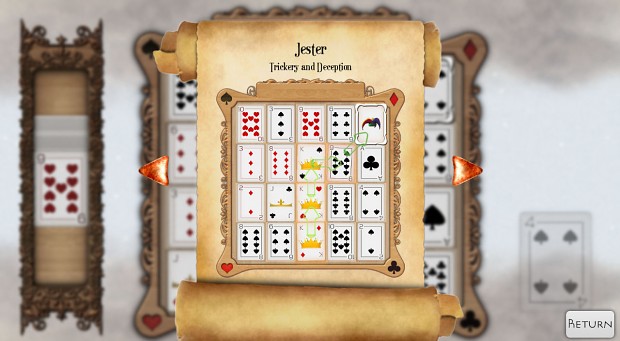 So yeah, those are the core changes. It should make the upcoming release on Desura a much more solid one!

Due to time constraints I wasn't able to add everything I wanted in this release. My personal wishlist includes: Battle Mode, 3D nature scenes in Zen Mode, an inventory system, unlockable card skins, unlockable 7x4 gameboard, and additional RPG elements in Nightmare Mode. These will all be applied in later releases.

If you enjoyed this article, please follow Didgery and show your support!
Or, even better, buy Didgery from Desura! Indiedb.com