In this entry, I'm exploring ideas for UI and combat improvements + showing off shadows.

It's been two weeks since the last entry. 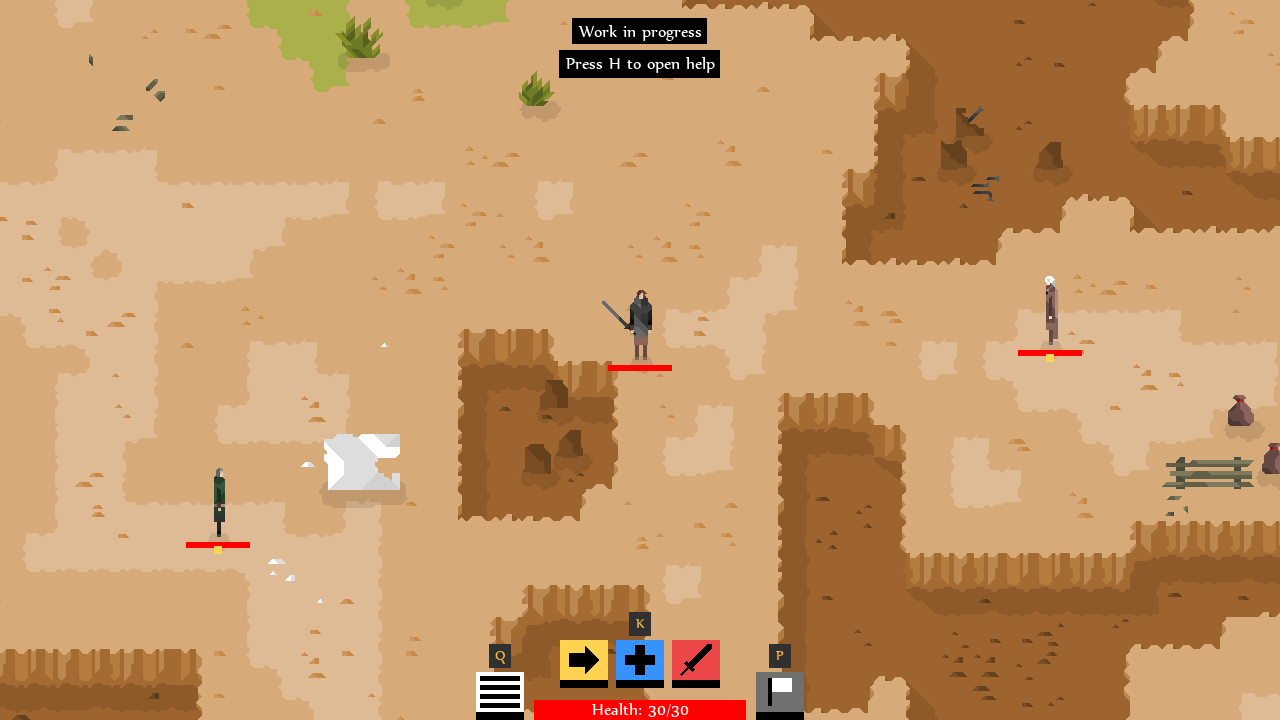 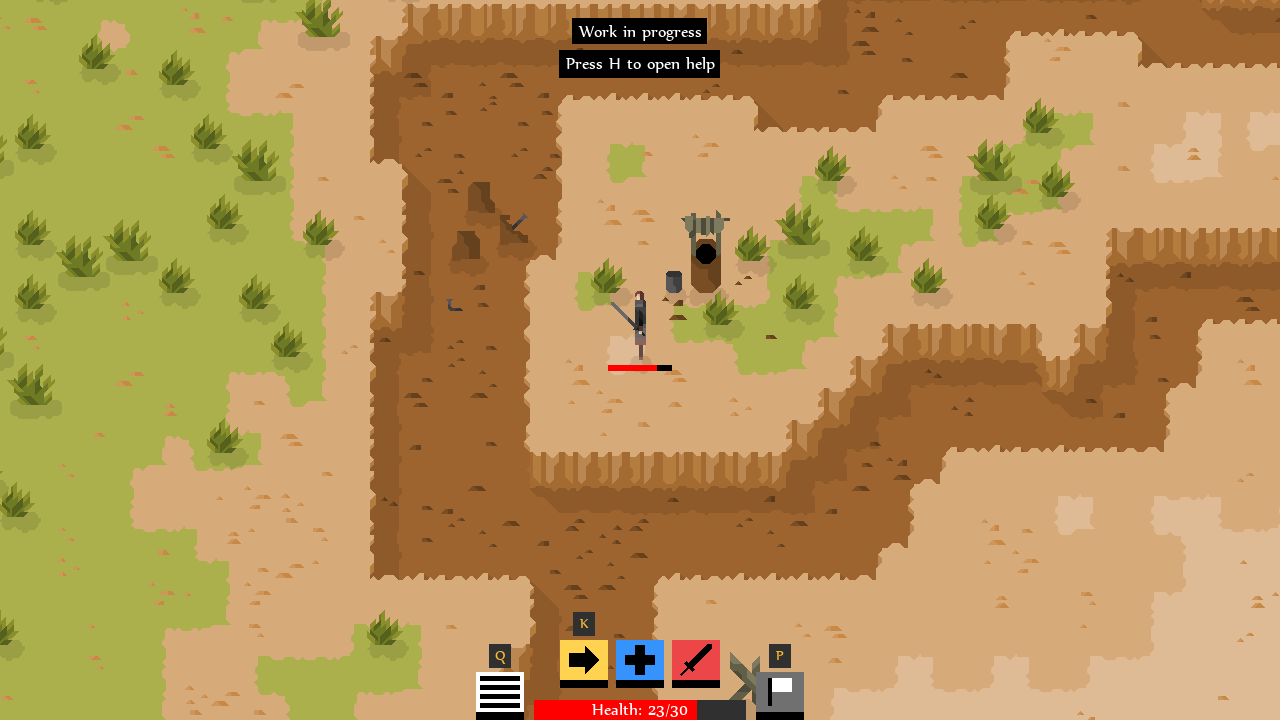 I decided to work on the UI because it has been bothering me for a while and because I wanted to do something different after working so long on shadows.

First I played with colors and frames, hoping that would be enough. 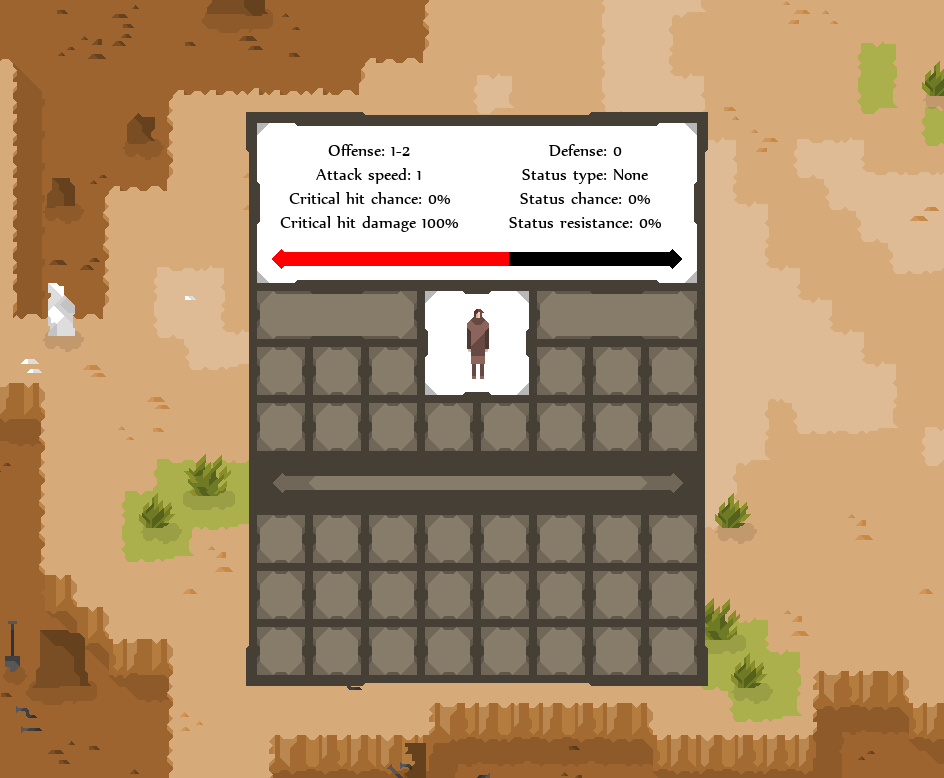 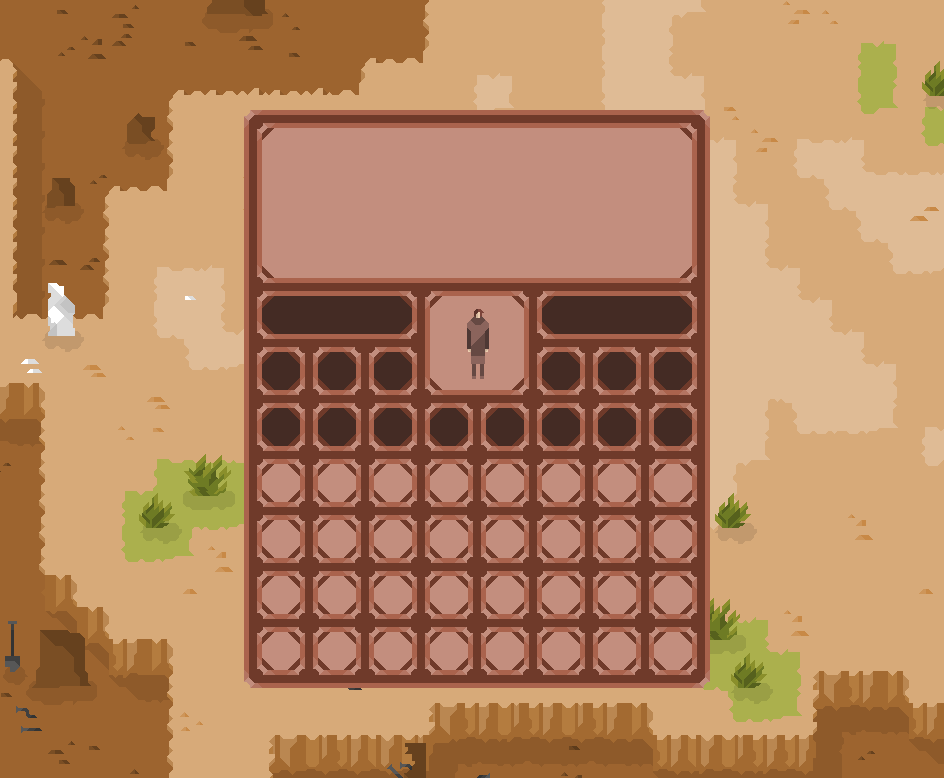 None of the mockups felt right for the game. I want an immersive UI, and none of those felt like a part of the game's world.

I wanted something UI as cool as old RPGs had - with statues, stone arches, columns, gems, parchments, and other good stuff.

While thinking about all of this, an image flashed in my mind, it looked something like this: 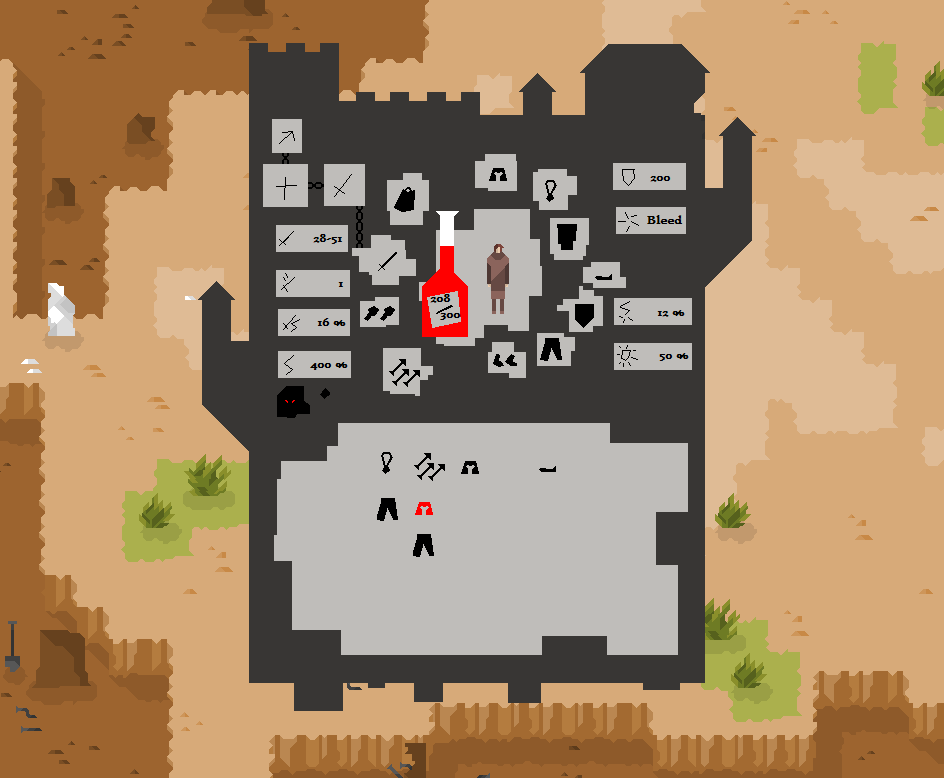 I've spent an entire day trying to make it fit the art style of the game.

The last iteration of castle UI even had shelves in the inventory. 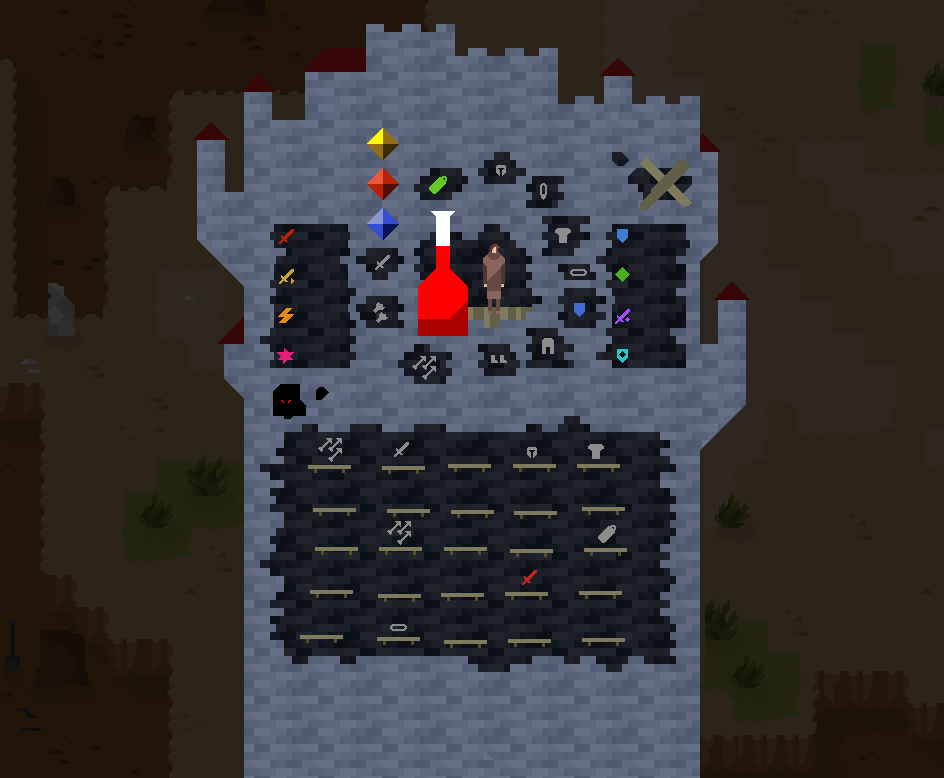 But I've run into problems.

I had two options: Make it noisy and tiring to the eyes to display all of the useful information, or hide the information to make it look better.

I really hate choosing between convenience and beauty, so I decided to drop the castle UI and try something else.

The next idea is to go for a medieval adventurer logbook/diary feel. 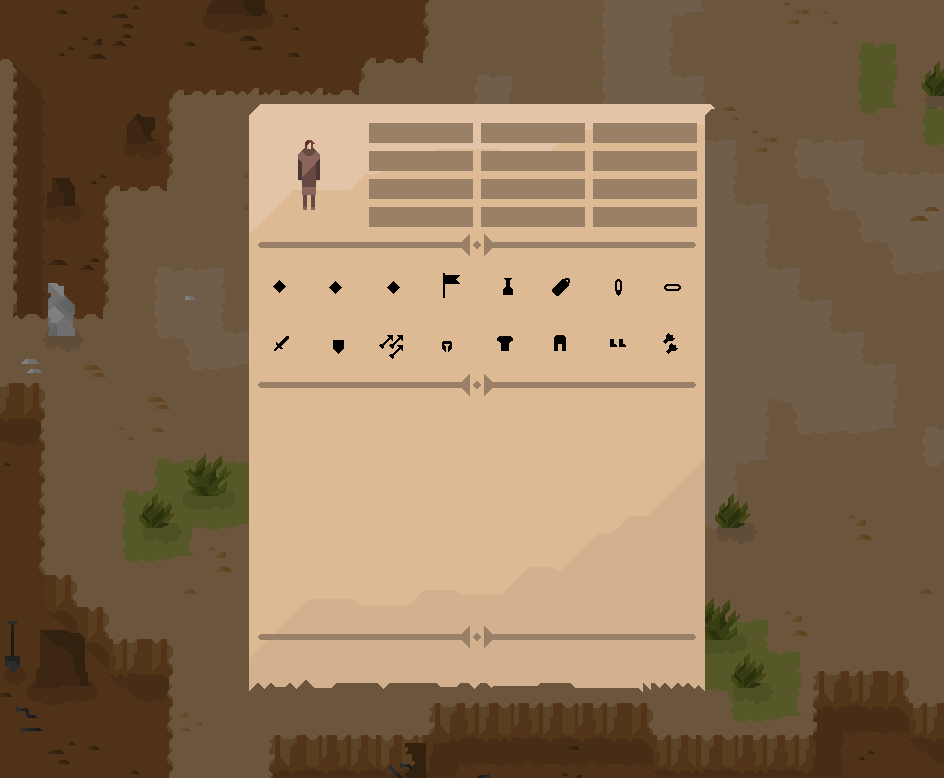 So instead of putting things on shelves in a castle, the adventurer would instead draw pictures of owned items on a piece of paper.

Currently, it's the best idea - this UI has the same looks as the rest of the game, it makes sense, and it's convenient.

Hoping to finish it next week.

Anyway, about the combat:

The feedback I received since the pre-alpha demo was released is clear - combat needs to be better.

Like castle UI, position-based combat seemed like a great idea at first.
It turned out that it's just more complicated than it needs to be and has no significant benefits.

I want to get rid of the position aspect of the system, and instead, allow to use attacks everywhere with different buttons as many other games do.

I also want players to be able to change their strategy during fights and have more options.

The weapons should offer 3 or more ways to defeat an enemy.

For example, ideas for the iron sword:

Attack A:
A quick attack that deals low damage, but makes the target bleed and increases movement speed temporarily.
The plan is to jump to the enemy, make it bleed and run away, repeat until the enemy dies.

Attack B:
A slow attack that in addition to dealing damage, binds both you and the enemy.
There is a short window for the enemy to escape.
The plan is to bind and outlast the enemy.

Attack C:
Creates an energy field that deals high to enemies that are performing attacks against you.
The energy field will also deal low damage to enemies around you.
The plan is to create the field and punish aggressive enemies, then finish them with area damage.

A is effective against C because you don't have to stay in the energy field. A is useful if you have low health and can't afford to take too much damage.

B is effective against A because bleed is only useful if it's possible to run away. B is a good option if you can take some damage or an ally is healing you.

This should give the player plenty of choices and make new things possible with AI.
NPCs could react to what you're doing, for example, try B when you're doing A.
Then you can switch to C for that retaliation damage or B - if you are confident that you can outlast the enemy.

I have no idea if this will work, but I think it's safe to say that the next version of the demo will be more interesting to test!

I'll be changing the combat when I'm done with UI and other graphical improvements, so in a week or two.

That's all for now, until next time!