In last part we took a look at basic moments of modeling and texturing of weapons. Now let's talk about creation of each model separately.

The first part of the article is accessible here.

Part 2 appeared to be even bigger than Part 1, so I devided part 2 by two sub parts. First sub part is below and second one will appear tomorrow.

In last part we took a look at basic moments of modeling and texturing of weapons. Now let's talk about creation of each model separately.

Given pistol is based on real-life H&K USP pistol, to be exact on his sports variant USP Match, distinguished by other block colour and bulky weighting material on the front, which make it look more brutal. By the way, Lara Croft was running around with the same guns. 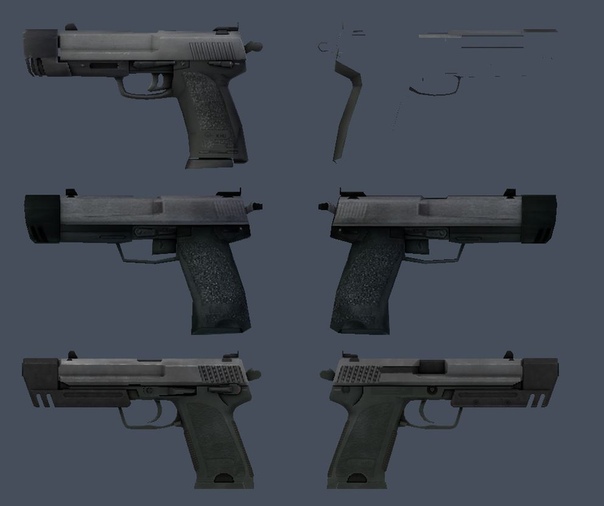 From up to down: View, World and my model

HL2 analogue more or less resembles the real prototype, however somewhat broader and scantier on details. I adjusted my model under HL2 scales, lengthened a little weighting material, took some details from original USP, like the form of the muzzle, from which shells are being fired, hammer, trigger and magazine release button.

At first, for some reason, I could not find normal photos of USP on Internet. Searched for long, was constantly blundered to the pictures of very low resolution, on which it was difficult to understand all the details. In despair, I even found the person who collects airsoft weapons. To my luck, he had USP in his armory, quite qualitative. However, to my requests to take his gun temporarily, the person politely refused, and I had to google again. A small forum of the weapon lovers came to the rescue, one of users of which posted a whole pack of very good photos of USP in one of the threads. I was very glad to such finding.

Right after that I joyfully began modelling. Since it was the first model on the list, I did my best with the highpoly, by recreating the original model quite authentically, even in invisible places. So authentically, to be honest, that if I had a 3D-printer, I would have printed this model and it wouldn’t had any differences from the original. 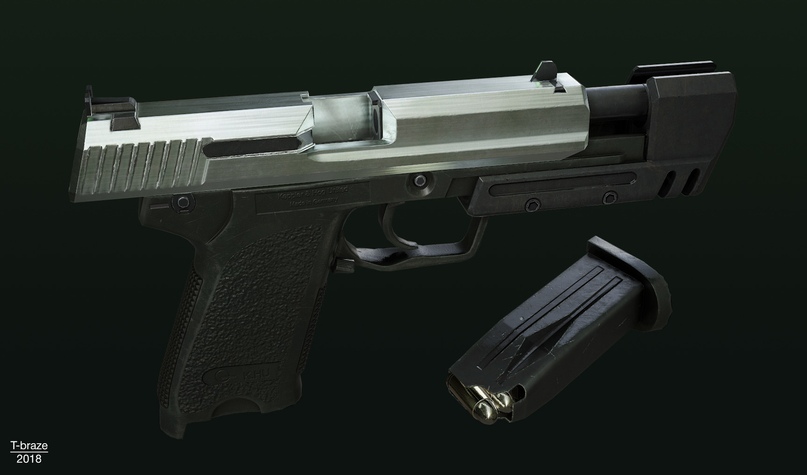 Besides the pistol itself, I have created the models for magazine and bullets, which you can see inside of it and also in the model of the fired shell. The overall polycount of lowpoly-model together with magazine and bullets is around 5100 polygons, most of which are rounded parts - trigger, barrel, slide stop.

I painted grip in a shade of green, similar to that of the W-model, for diversity reasons. Additional markings were made with black & white masks prepared beforehand in Photoshop. Just like that, a legendary company Heckler & Koch in my variation turned into nameless Keppler & Hog United (you could see abbreviation KHU on the original texture, which I decided to decipher). 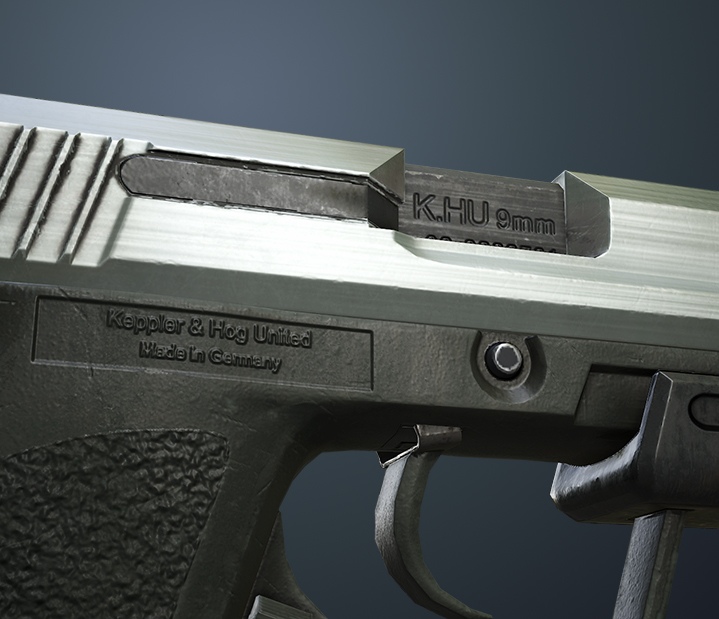 At first glance this weapon looked like something impossible to me. All this rounded forms, smoothly transient strict angular surfaces, reclining cylinder fasteners, and the cylinder itself. But nothing impossible in the end - I was quick to find a big amount of real Magnum revolvers. Original HL2 V-model is also quite well-worked (in comparison to other models). Nice thing to point is that W-model looks awful, most probably taken from HL1, but with different texture. 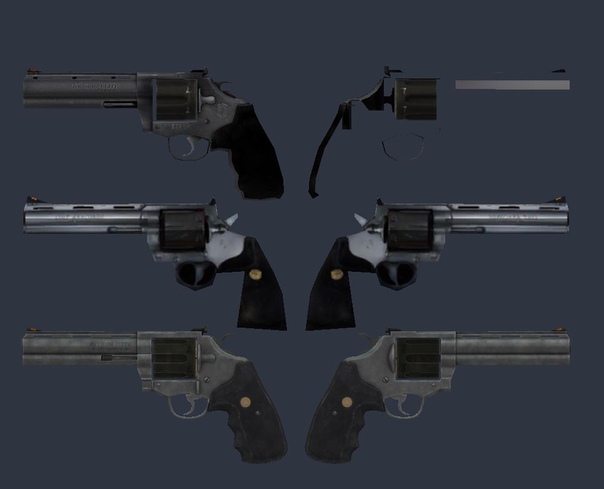 From up to down: View, World and my model

The most interesting for me was the process of modeling the cylinder. I felt sincere satisfaction after modeling it and baking normal map onto lowpoly.

Additional mesh for hollows and drawing with normal map

However, during the creation of groovings, which prevents the chaotic movement of cylinder, I had to take shrewd. It would have taken a lot of time to model it on the cylinder itself, which is why I created this grooving on the hollow surface, baked normals and later added them on the texture on Substance Painter. 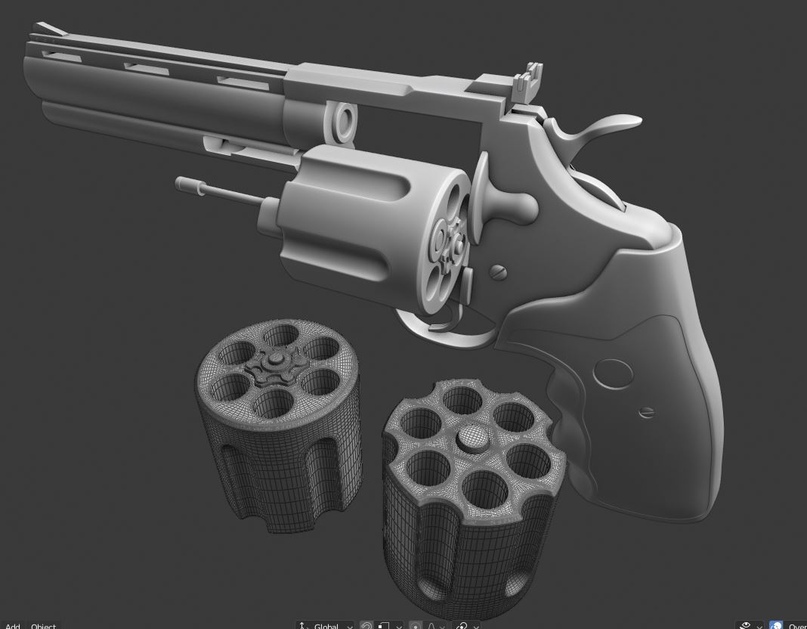 There were some complications with fittings of cylinder on the body, but I managed that. Most of the polygons went on the cylinder. To save some time, I somewhat simplified design of the grip, since it is obscured by the characters hand most of the time anyway, the grip has the least amount of polygons. Markings on the gun - Python Elite, same, as on the original texture. 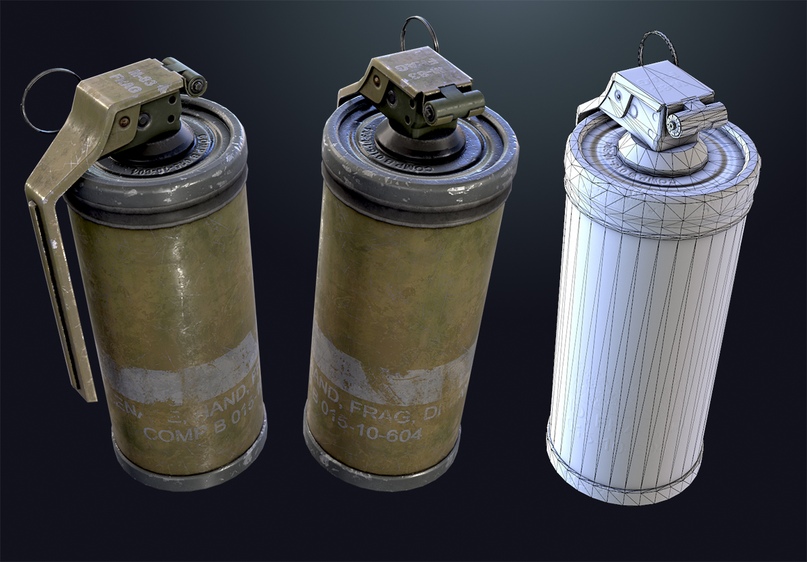 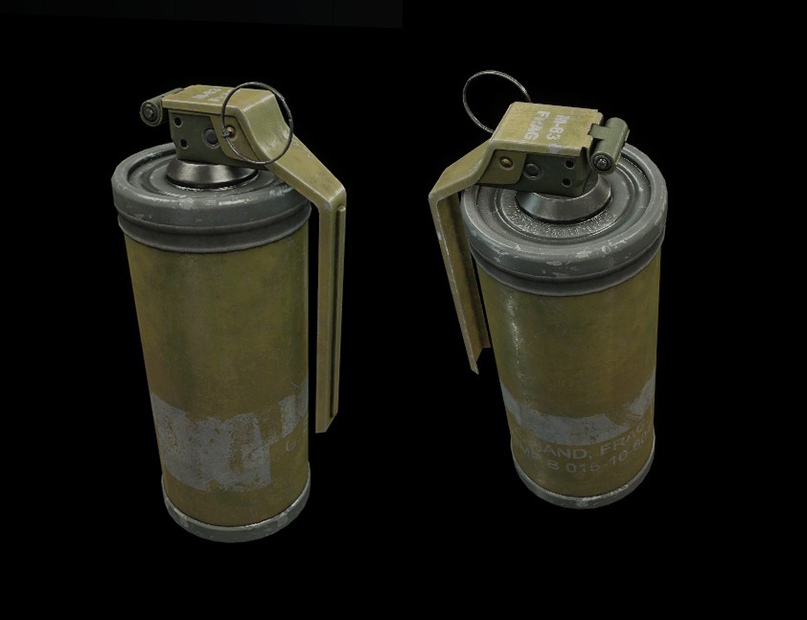 The most complicated model in the world (just kidding). It’s interesting thing to point, that such grenades in real world are not explosable at all, but rather smoke or concussion. Nothing we can do here. I didn’t encounter any nuances while creating highpoly and lowpoly models. To give the surface of the grenade an authentic metallic view, I experimented for a long time with exponent and tint masks during the creation of textures. Looks like I succeeded. 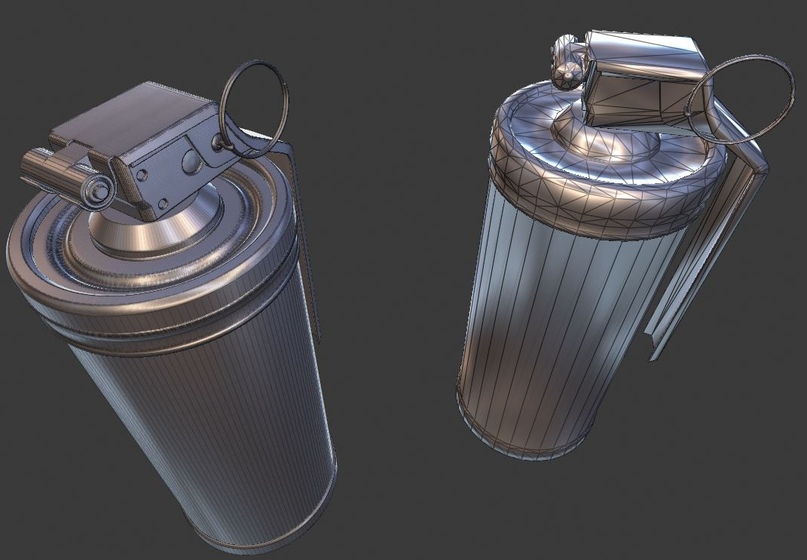 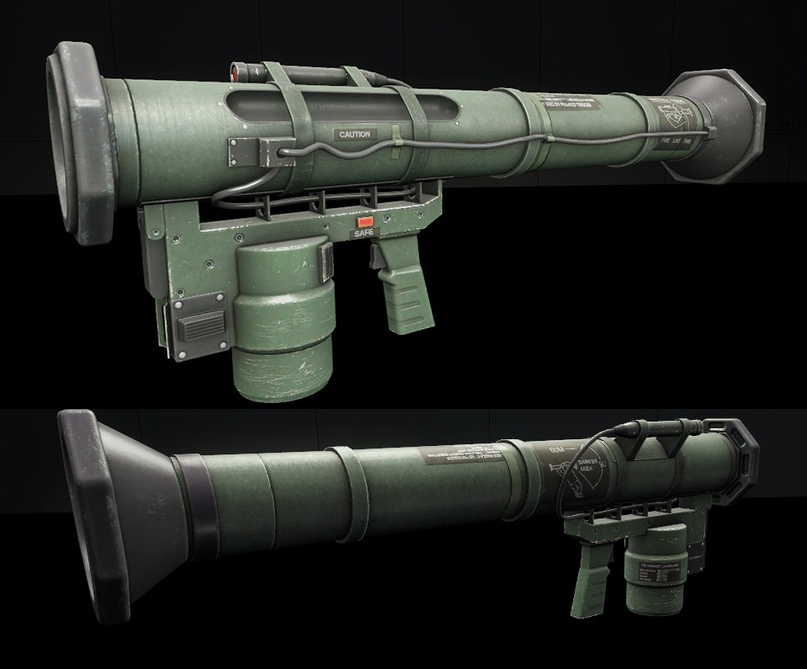 Original V- and W-models were different in shape in color, with the latter one the tube fwas facing opposite direction (if you take a look at examples of real prototypes). 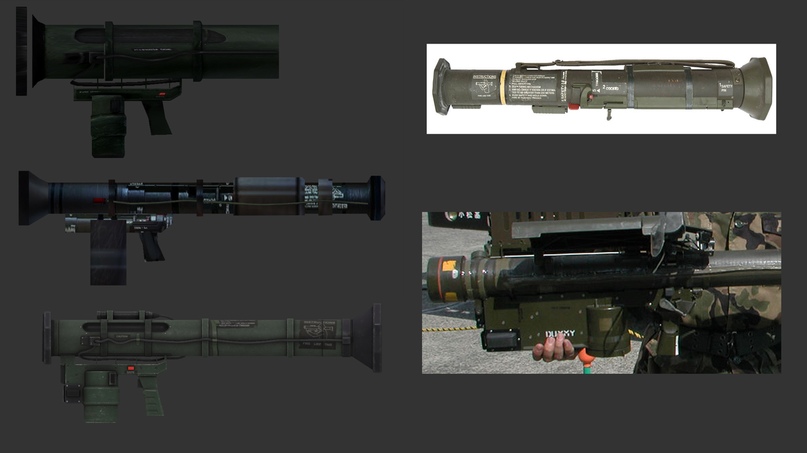 Differences in models and real prototypes

As the basis for overall view I took V-model, but for the scale I used W-model. Swedish AT-4 is a real-life prototype for this rocket launcher. The problem is that the real prototype - is signle used, while HL2 resembles under the principle of Stinger, with several charges in “magazine”. Besides pictures of AT-4 I also looked for several references of Stinger.

In result, the basis of my model - almost exact copy of AT-4, but with control unit form Stinger. Together with new rocket launcher model comes new model for the rocket in two versions (with opened and closed fins). 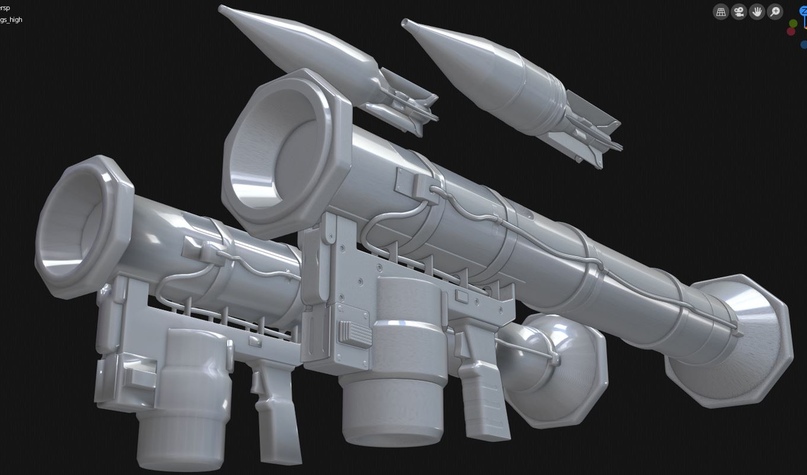 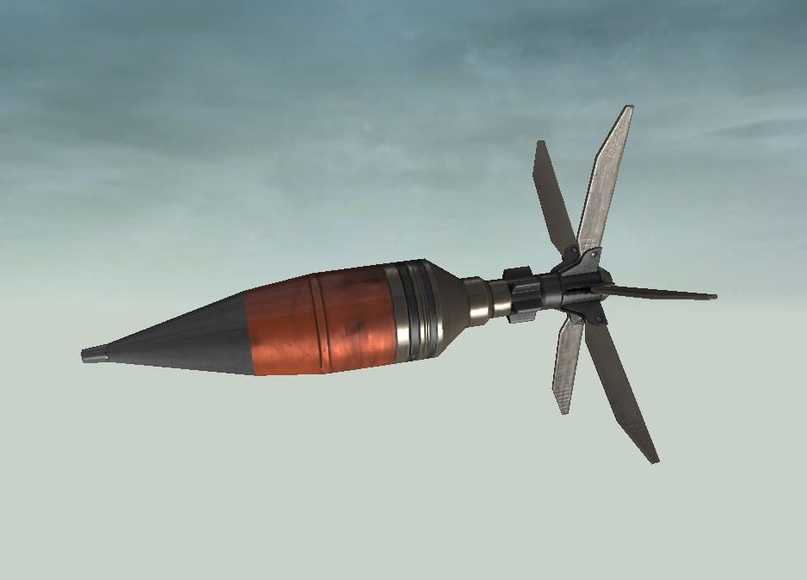 That's all for today, continuation will come tomorrow. Thanks for reading.

Neat stuff, I love the 9mm and the revolver.

No matter the price I will buy it!

I agree, they put so much effort to this project, it deserves my money.