In the early days of Astýran’s rise to power, he faced many challenges. One of these was the taming of the highlands of the northern Narthendar region.

In the early days of Astýran's rise to power, he faced many challenges. One of these was the taming of the highlands of the northern Narthendar region. While the primary settlements of the north joined him, including the city of Thingstów in the west and the town of Bordrima in the east, control of the vast hills dividing the east and west regions of the Highlands eluded him. The Morbearn, a stealthy and fiercely territorial tribal people, raided trade caravans and patrols between the east and west, denying Astýran the important routes through the central hills that would allow for trade and troop movement throughout the north. The Morbearn refused to even speak to Astýran's emissaries, making negotiation impossible. To solve this problem, Astýran reached out to another tribal people, the Men of Scúrende.

Long rivals of the Morbearn, the Men of Scúrende lived in the foothills of the northwest mountains. Their tribe held land stretching out into the hills west of the village of Scúrende, but had been locked in a holding position against the Morbearn for years. Astýran offered them a deal: the Men of Scúrende would swear fealty to Astýran and join the Kingdom of Thenodar, and in exchange he would assist them in defeating the Morbearn by providing weapons, armor, and training. Elder Íswind, the chief elder of Scúrende, agreed to the deal, swearing fealty to Astýran. Astýran then sent supplies and smiths to outfit Scúrende's warriors and Heoru, Astýran's most trusted general, to train them.

Within a year, the tide turned against the Morbearn as the newly trained and better outfitted Men of Scúrende drove against them. The combination of standardized and formal training, quality equipment, and tribal knowledge and experience proved deadly, and within three years, the Men of Scúrende drove the Morbearn from the central hills north into their heartland around the slopes of the northern mountains. As part of their arrangement, the Men of Scúrende took charge of securing the central and western hills of the northern highlands, their warriors and hunters guarding against any resurgence by the Morbearn. In exchange, they experienced more autonomy within the new Kingdom of Thenodar than most other peoples or cities. 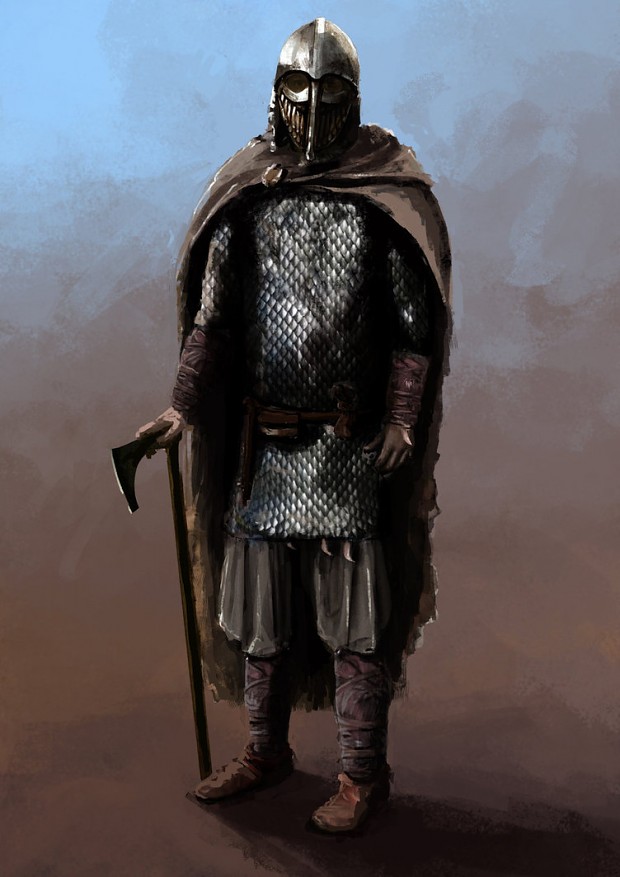 It has been many years since those days and the threat of the Morbearn has long since faded as most of the elders of that people have submitted to Thenodar's rule. However, this has not dulled the warrior and hunter culture of Scúrende nor its people's abilities. Because of their remoteness and the means by which they joined Thenodar, the culture of the Men of Scúrende varies greatly from that of Thenodar's heartland. The appearance of the Scúrende Warriors in comparison to the Thenodrim Swordsman is a fine example of this. While their troops are less regimented and not as well trained in the formal sense, the Men of Scúrende make for fiercely loyal soldiers and will fight with great zeal for their captain. Also, the Hunters of Scúrende are the most skilled archers in the north, tempered by experience in the hills of northern Thenodar.

Is this some kind of metaphor?...

I too feel this is perhaps a metaphor of some kind...

indeed, i wont dare to take a guess, but i'd like to see how things develop in the next year

No metaphor intended. Don't read too much into stuff :P . This is just where the lore lead us as we created it.

I don't think this is MERP... Or even lord of the rings. What is this?

@RandomZombi3: Its an original fantasy setting, its not supposed to be attached to Tolkien's mythology he created. The only similarities between this project and MERP is that most of the people on the team (including myself) used to work on MERP.

Ok, there may be similarities you can find between this and Tolkien. We're not trying to reinvent the wheel here, but we are trying to give our own spin on the fantasy genre ;)

I wasn't saying it was similar. I was just confused because it is posted on the MERP page. xP

OOOooooooh. That was a formatting error when the post was created. And Moddb brilliantly has no reliable way to undo that after the post is made.

Just realized there was a link to the game in the post. Haha. Looks really interesting, definitely going to be keeping an eye on it. (:

Awesome! I told Insanity there would be tribes ;)