In Feudums, your decisions on where to build your settlements and castles may be the difference between winning or losing. Choose wisely! 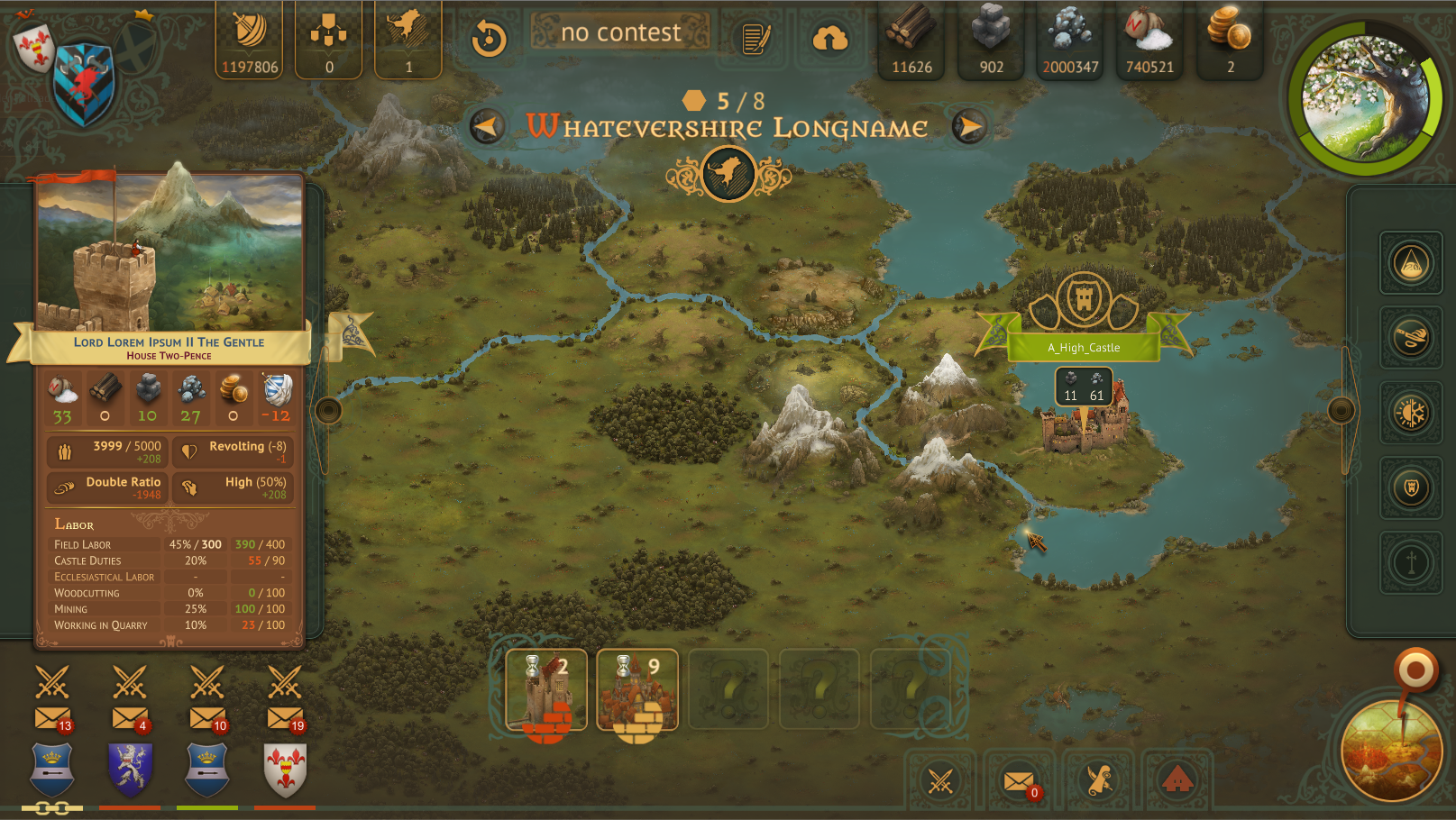 If you ask a realtor what the three most important factors are in selling a house, the answer will almost always be 1. Location 2. Location and 3. Location. In Feudums, deciding where to place your settlements and defensive buildings - ie. castles - location will be a prime concern of yours as well.

Knowing the game’s terrain types is the first step in making the right decision. Feudums has seven different types of terrain (plus rivers) that you can encounter.

GRASSLANDS are the wide-open areas on the map. Not to be confused with its less-fertile cousin, PLAINS, both types of tiles are ideal spots to place farms - although you will get a better harvest from placing it on the grassland tile. Settlements, farms, and castles may be built on both sets of tiles.

FORESTS are home to many tasty critters and the local population or invading army can hunt there to gain additional food as needed. Forest will be used mainly for logging as the lumber a forest produces will be used in nearly all tile improvements as well as building military equipment like siege engines. Keep in mind that forests also affect combat and movement. All military types move slower through the trees and defending infantry receive a bonus. Forest tiles cannot be upgraded in any form. However, players can purposely clear the tile of trees. If that happens, the tile becomes grassland.

WETLANDS or SWAMPS are nasty, wet places that provide a small amount of food and coin for nearby settlements but aren’t much good for anything else. They can serve as a natural barrier to potential invaders, as wartime armies would experience heavy attrition trying to pass (if they could pass, at all). As natural barriers, they can be just as effective as mountains in the right hands. Only light military units can move through a swamp tile and at a very reduced rate. No tile improvements may be made on a wetlands tile.

HILLS are great places to place tile improvements such as settlements and castles because their wartime bonuses always favor the defending army, and you can even perform devastating counter-attacks from the tops. Hills also can provide iron (by building a mine) or stone (by building a quarry) for their owner. Ecclesiastical fiefs may also be built on hills. These small pastoral fiefs provide a boost to a nearby population’s morale, offer extra Virtue and later they might unlock ecclesiastical unit types if you also have a castle nearby.

The most important feature to realize about MOUNTAINS is that they are impassable. When faced with a mountain range, units have no choice but to find an alternate way around them if no mountain passes are available. Iron, and wealth (gold and silver) can be found in mountains and mines may be built on a mountain tile. Stone quarries may also be built on a mountain. The only type of settlement which can be built on a mountain is the ecclesiastical fief - that might provide more bonuses than on a hill or grassland.

There will be no mariners fighting on the water - at least in the 1.0 release. SEA and LAKE tiles provide a boost in food and coin to nearby settlements. Moving over water tiles require a boat and captain - which can be found if you have the coin to pay for the passage. Beware though, attrition can be deadly if a storm sweeps up and plunges your troops to the bottom of the water.

From an economic perspective, RIVERS are important as they enhance the yield of farmlands, cities and castles that are placed next to them. Farmlands benefit from a better yield of food, cities get a population growth bonus and better commercial income, while castles gain extra coins for guarding and assuming toll duty on the river transit.

For military units, rivers provide an additional defensive bonus if they’re defending against a hostile force crossing the river to reach them; also, all units moving through a river are slowed down.

So where should you place that city or farm? Read the rest of this article at www.feudums.com. See you there!