To kick off the summer we've overhauled an existing unit and building, added a new building, replaced the GUI, added quality of life features, rethought mechanics and so much more.

Posted by Vashta-Entertainment on Jun 14th, 2016 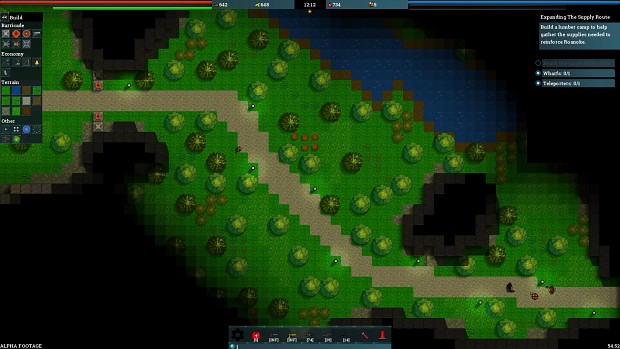 Two weeks ago full-time development on Harvested continued. As we work towards TooManyGames at the end of June we are focusing on improving the user experience to be as fluid as possible.

One of the most visible changes is our new GUI library - we’ve replaced nearly every GUI image in the game, added some new ones, and even adjusted the HUD a bit. All four vitals (hitpoints, shield, stamina, and XP) are now at the top of the screen.

We’ve changed the day/night cycle, slightly. There are now two more hours in the day than there are in the night. Day now lasts from 6:00 to 20:00 (8 PM.) This change only impacts levels with demonic enemies, as portals are only active at night.

Body armor now provides a health shield in addition to some damage resistance. Functionally, this is an additional pool of hitpoints - however, unlike the initial pool of hitpoints, shields do not replenish automatically, from fountains, or from medkits. The only way to replenish a shield is by picking up (or purchasing) another body armor.

The number of tile layers has been halved, slightly improving performance.

Most lights now flicker slightly, adding a life to the screen. Buildable light structures now support six different light colors, which can be toggled using a button on the building’s card. This should add some visual variety to camps.

We’ve made some changes to the way demonic portals are disabled. In the past, a destroyed portal could be prevented from re-opening by placing a rock on top of it. We’ve added a new structure to do this instead - Portal Disablers are an expensive structure that prevents portals from opening within a certain radius of it. Like any other player-build structure, these will be targeted by enemies (with a high priority) and it is advisable to build a defensive battery surrounding it.

Exploding demons have been replaced with a pulsing enemy that does heavy AOE attacks to biological units surrounding them. These units are very dangerous at close range, but are no longer treated as a siege unit. These pulses release frequently, unlike the explosions that would happen only once when the enemy was killed. In the coming months we plan to add a lot of additional units to the game, and the void in siege strength will be quickly replaced.

Biopulsers are our most dangerous close-range unit yet

Demonic portals no longer stay open during the day. This made them an easy target to destroy during the day, and it didn’t really make much sense why the demons would keep them open, so now they close every night. If you want to kill a demon spawn point, you must now do it at night - when you are already facing a heavy onslaught.

Furthermore, these portals now spawn in random locations every night. They used to remain in place until they were destroyed. The random placement will make enemy sieges much less predictable. This is part of a larger move to write a far more intelligent AI for the demon enemies, which we will talk about in more detail in our next article.

A while ago we added an immobilization turret, but we realized nobody ever builds it. Our testers suggested replacing it rather than improving it, so we’ve put an AOE turret in its place. This new structure launches explosive projectiles over walls and other blocking structures, decimating enemies where it lands.

Functionality of resource hubs (lumber mills, mining camps, and fishing wharfs) has been expanded. Now, resource nodes (trees and fish) near these hubs replenish more quickly. To balance this change, we’ve slowed the replenish rates for resources that are not near hubs. Upgrading a resource hub expands its radius of influence.

It is now also possible to toggle whether a resource hub is active. By hitting the new “sleep” button, hubs will disperse workers to other hubs. This allows you to re-organize your workers (or move them further from the battlefront) without destroying old structures.

We will be demoing at TooManyGames in Oaks, PA, from June 24th - June 26th. By that time we will have another set of changes focusing on user experience and enemy AI. After TooManyGames, we expect to focus on improving the game’s combat system, specifically expanding offensive mechanics and enemy units.