The Old Master is one of twelve playable characters in Second Chance Heroes, a cooperative arcade action adventure coming to the PC and Mac later this year.

Posted by RocketCityStudios on Sep 19th, 2013

With Leonardo da Vinci, one of twelve playable characters in Second Chance Heroes, we set out to design a character that both honors his history and provides players with a touchstone to the future. We settled on a home-built wooden set of armor, topped with his iconic canvas blades. He’s one of the designs we’re most proud of. 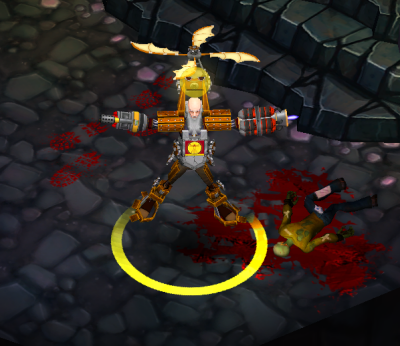 da Vinci in the obvious pose

For weapons, we attached a rocket launcher to one arm and a flame thrower to the other. His primary ability is a single target with splash damage rocket fire, while his secondary allows him to fly using his propeller and burn a path below himself as he flies over his enemies.

Leonardo is a bit of a hybrid for us. He’s a character that primarily functions at range, but can jump into the battle from time to time. His secondary is a dual action ability that when first activated sees him take flight. This turns off monster collision, allowing him to escape and pass above enemies. It also greatly increases his movement speed. It’s used both for escaping and closing the gap. Once close, he can hold the fire button to unleash flames below. This does an area of effect that applies a damage over time to any monsters unlucky enough to be under him. Finally, release the button and he’s back to warp speed. If the player manages the energy bar correctly, the fire can be set and enemies wiped while da Vinci is happily back on the other side of the room tossing rockets at the stragglers. 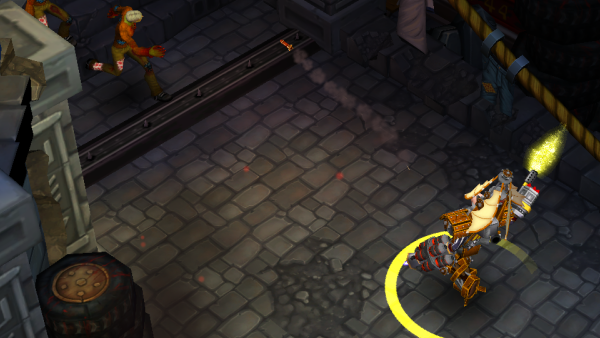 One of the toughest parts of this game and its 12 characters for us was to make sure each had that intangible thing that made it “feel” right. It’s almost impossible to explain, but you know immediately when you play a game that has it and does not.

Early versions of da Vinci had this problem. He had the rockets, they had their tracers, the right sounds, but still they felt a little bit off. They lacked impact, he just felt like he wasn’t doing much, even when he was mathematically very strong. 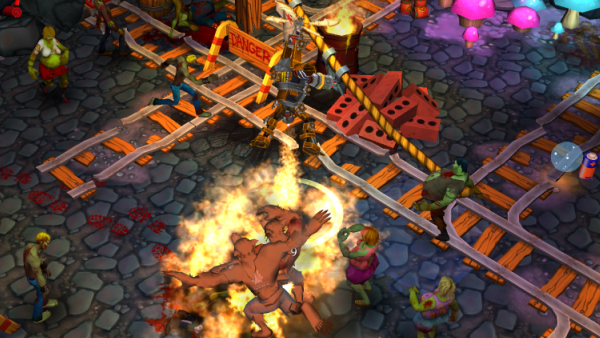 At that point, he had a small chance of a knockdown when he fired a rocket. One day, we took some advice Sid Meier has made famous (his double or half it rule) and cranked that up to a 100% chance. On one hand, it wasn’t workable. He became invincible. On the other, he became hilariously fun. He’d wander around the level popping monsters and werewolves into the air like kernels of popcorn.

From this we found our solution that has given da Vinci his signature feel in our game. Whenever he strikes the killing blow on an enemy now, he sends them flying. It actually has zero impact on him as a character, but this little touch preserved the popcorn maker feel and really upped the fun factor of this character. 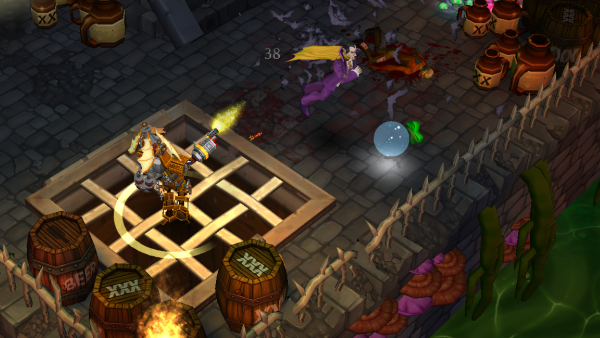 Taking on a vampire

This is the fourth of 12 characters we’ve explained here on IndieDB. If you missed them, check out our updates on Abraham Lincoln, Montezuma and Julius Caesar. We’ll be back with articles on the other eight in the coming days and weeks. Stay tuned.

As we march towards the end of development on Second Chance Heroes, we could use your help. We will launch later this year for PC and Mac, but if you’d like to see this game on Steam we need your help. Please take a moment to drop by our Greenlight page and cast your vote. Every single one is a huge help!