Leadwerks Software announced today the release of Leadwerks 3, their new development platform for building mobile games with native code. Based on the technology developed for their successful game engine for PC, Leadwerks 3 brings a totally new approach to mobile game development. 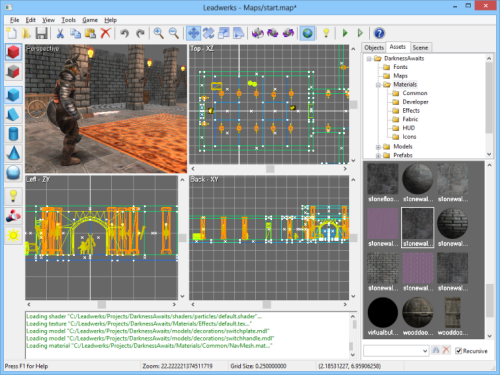 While environments such as Unity and MonoDevelop use managed code...that is, code that is designed to be easily run on multiple devices...Leadwerks uses an approach called native code. Applications built with native code are optimized to work with each platform. That means games written with Leadwerks will run faster and be more powerful than their managed code counterparts.

Mobile is growing rapidly, but there still exists a gap between mobile gaming and the larger game industry, which has traditionally focused on consoles. Professional game studios overwhelmingly favor native code because of its speed and flexibility. By focusing on the standard the game industry already uses, Leadwerks provides both professional studios and indie developers with an easy pathway into mobile. Games written in C++ can be ported to Leadwerks 3 without having to rewrite them in a new programming language.

Leadwerks 3 brings some innovative new approaches to the table:

Leadwerks CEO Josh Klint said that “Leadwerks 3 is a big step forward for our company and our users. We’re bridging the gap between mobile gaming and the traditional game industry.” The product received a favorable response at the GDC 2013 expo. ”C++ is the game industry standard. Our market research at GDC 2013 revealed a huge demand for a cross-platform game engine built on native code. We found the design philosophy of Leadwerks resonates with a lot of developers.”