We just released a new patch for the Universim with a bunch of new content.

Welcome to another exciting patch day with the latest release of v42! In this update, we poured some much-requested love into the earlier stages of the game (notably, the Stone Age), alongside other improvements that are essential to keeping the later stages in good standing. Let’s run through the improvements to current systems, rebalanced AI, reworked mating, and some sneaky bugs we have stomped thanks to your feedback.

We also made this new short video explaining what The Universim is for new players and hey maybe you can find new footage that you never seen before.

With the introduction of crazier fire, we had to revisit our firefighters to make their crazy match the fire’s level of crazy. Fires pop up a lot, either as a result of mother nature or an unfortunate accident on your part. It’s important to have competent (ok, somewhat competent) Nuggets running around with buckets of water from the early stages. Give a warm welcome to the new firefighters!

Ever wonder about the life trials and tribulations your Nuggets go through? We've added a Stories Panel where you can keep track and see the progress of your civilization's experiences! Think of it like a nice little scrapbook that you keep as your world grows up. We’ll be adding more quests in the future so keep an eye out for updates to the Stories. 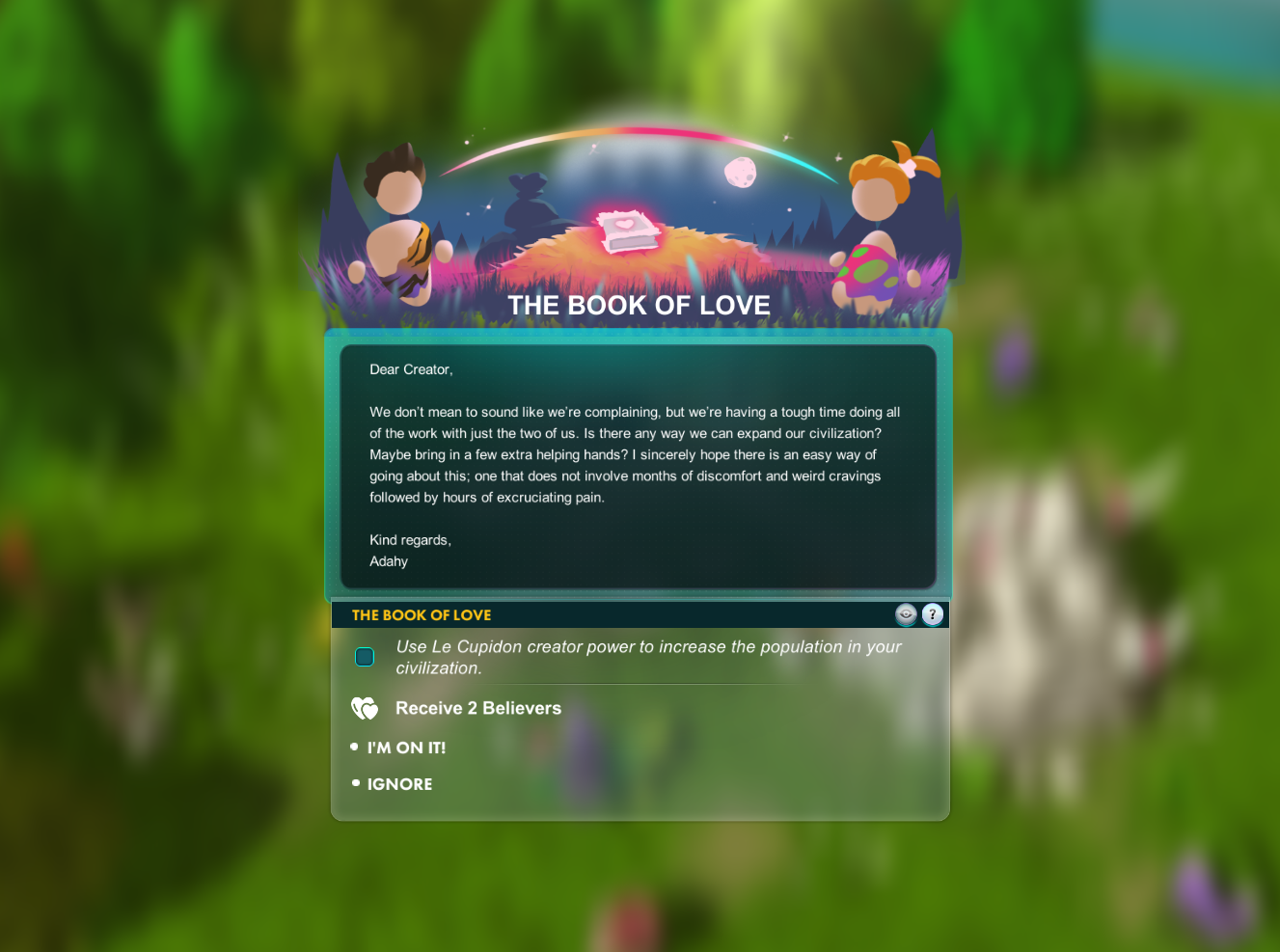 Now more than ever, firefighters will be doing their best to explain proper safety guidelines to the rest of the Nuggets. Despite their efforts, there’s still going to be a lot of work for you to do. In extreme situations, like the imminent destruction of your city, it may be a good time to step in. In order to do so as effectively as possible, you will have to learn the proper approach to dealing with fire. Hopefully you get the instructions in time!

Before you enter space, you will have to learn how to smooth out the rougher features of planets along your journey to conquer the galaxy. As your civilization evolves, it produces more and more waste that pollutes the environment. This affects the overall health of your planet and your oceans. Oceans in return become toxic and make your Nuggets’ lives even harder than usual. It is your responsibility to ensure that your civilization stays in top health. In order to achieve that, you might want to learn some additional skills.

The ocean always inspires the imagination and brings joy to the soul… at least the real ones. We changed the look of the planet, vegetation, and animals, but we always kept our oceans the same. As the years went by, our water shader became less appealing and stood out against the higher fidelity assets. We took some time to make it shine. Take a look!

As we worked on all the climate stuff, we had to review our natural disasters. Sandstorms just weren’t cutting it anymore, so we had to add in something new. Introducing Blizzards and Heatwaves! These two disasters will replace Sandstorms and occur based on the current season. No more dust! It’s way worse now. Better get those Forecast Towers and Bunkers built!

As we get closer to the Space Age, we are slowly reworking certain Nugget indicators. It’s a little difficult for Nuggets to survive without oxygen, so it’s probably a good time to improve how those details are displayed. The Nugget Panel now shows the current oxygen level for the selected Nugget and all effects applied to the oxygen level. Just try keep it above 0 and there won’t be too much trouble. 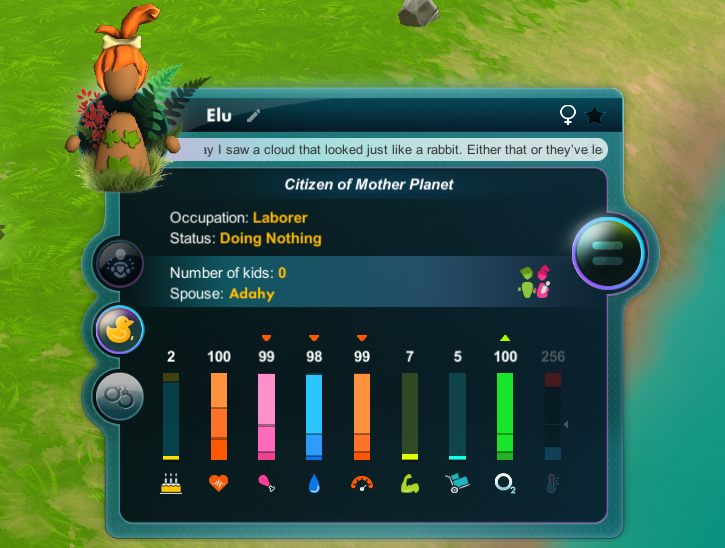 Not in the build but being worked on:

We’ve been hearing that some folks are having an issue with their population and we want to make sure that it’s not a struggle to keep your Nuggets’ numbers up outside of disasters or poor environmental conditions. We’ve made some changes behind the scenes to the population that we hope will be more fun to manage as no one likes to have a sparsely populated ant farm. This will also make disasters a little more forgiving. Please be sure to give us your population feedback in the future so we can always better tune your Nuggets’ wiring to make your guardianship of your hapless Nuggets more rewarding.

Rewritten from scratch! This AI was responsible for what Nuggets decided to do (or not do). The rewrite has allowed us to fine-tune their behavior and ensure that they will respond to their needs without hesitation. This isn’t like working for a really pushy boss -- Nuggets get to use the bathroom or eat once in a while (and won’t get forced to do both at the same time for the sake of efficiency). This also applies to which needs outweigh others, so Nugget won’t have any more internal conflict about whether to grab a drink or bite into a burger, based on which action is the wiser choice. Faster need fulfillment achieved!

Nuggets weren’t very good fighters in the past. Sometimes, they would charge into battle backwards, or become oddly picky about which opponent to fight and run back and forth weighing their options. While this makes for excellent diversionary tactics, it doesn’t work so well if they aren’t intended to be a diversion. Next time your Nuggets engage in combat, keep an eye out for their refined aim and precision!

Previously, Farms and Fisheries weren’t affected by local temperatures. They were pretty binary, based on the seasons. Now the local placement of these facilities will affect how well they operate during winter and summer. For instance, placing a Fishery near a desert biome will keep them running during winter, while mountainous regions could be a bit colder even during summer.

In preparation for the colonization of alien planets, we had to revisit our global temperature systems again and calibrate them to more precisely match expected values for each season. Since climates will play such a big role in colonizing planets (and determining their habitability), we needed to ensure it’s a well-balanced system. Plus, it helped introduce Blizzards and Heatwaves. You can thank us later.

We reduced the rate of charging Batteries with the Lightning Strike Creator Power. Previously, using a single bolt of lightning would completely charge Batteries, which made other generation systems pretty much obsolete. While Creator Powers are meant to help your civilization and feel powerful, we didn’t want them to make other systems completely redundant. Thus, Lightning Strikes will now only charge Batteries by 25% of their capacity.

We reworked how households operate to make everything way less weird and complicated. The old system saw offspring stay in the same house their entire lives, well after their parents have passed, even if another couple became the new owners. This isn’t an American sitcom about that guy who randomly lives in someone else’s house and eats all the cereal. The same thing applies to if a Nugget loses their spouse and remarries. They will now move into the same house, as opposed to living in two separate houses. While the old way was probably healthier for their marriage, the new way is more efficient for the real estate market. Plus, all of this residential madness made mating really difficult and buggy. No one wants that.

Fixed: Kickstarter creator power did not apply boost to the nuggets stats 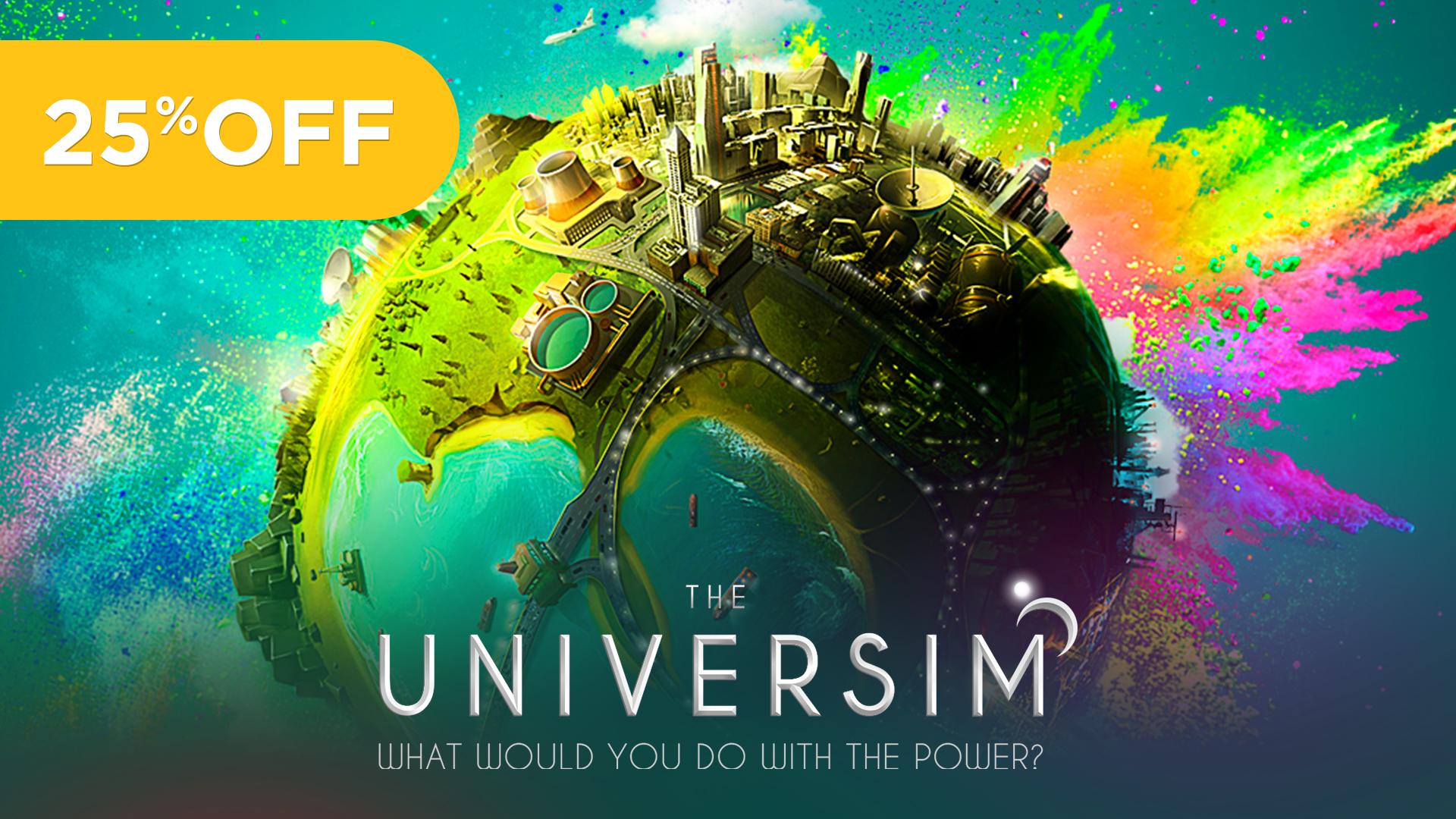 Awesome, it really came a long way since I first follow this game.
Keep it up :D