Design and create missions like the dev, then upload to the workshop, or download and play shared missions. Steam Workshop support has to be one of the most exciting features to have in Absolute Territory alongside the Level Editor, and this is why...

Posted by centaurianmudpig on Jun 11th, 2020

What is Absolute Territory?

Absolute Territory is a space combat simulator born from my nostalgia for playing similar games back in the '90s and '00s and of course taking inspiration from sci-fi TV shows and movies. I have loved the idea of flying around in your space ship, overcoming the odds against an overwhelming opponent, and making a name for yourself.

Where did the inspiration for a Level Editor come from?

I played a lot of Wing Commander as a teenager. As a franchise, it provided an experience that was originally relegated to watching on TV. Even though it hit and missed in some places (WC: Privateer being a hit and WC: Academy being a miss) to me at least.

The Level Editor in Absolute Territory was born from the disappointment of Wing Commander Academy. OK, I'm sure you are wondering "Why? Just, Why? You said it was a miss?" Well, it was, due to its implementation. You see, at the heart of the game, you made your own missions to fly. For me, the idea of being able to create an infinite number of missions to continue flying sounded awesome. The reality, it boiled down to placing down some opponents and hazards at a Nav point, then flying said mission.

That was nothing like the type of missions you would experience in Wing Commander 1 & 2 where you flew scripted missions that could react to you the player and other in-game actions. Absolute Territory would need to include a more in-depth Level Editor.

When Freespace 2 released it came with a Level Editor that was used to create it's campaign missions. But heck, that thing was on a whole new level, separate from the game itself. I didn't have the internet speed or the time to try and spend dozens of hours on something that complex. I gave up after an hour. The Level Editor in Absolute Territory would need to toe the line between having depth and feeling 'out of your depth'. Removing the need of spending many hours figuring out how it works.

[h2]What does the Absolute Territory Level Editor do differently than the competitors?[/h2]
Yea, I'm going there. Comparing to competition from decades ago to Absolute Territory, as a sole indie developer. On GoG, those games are still being sold and therefore I'm competing against AAA studios that are defunct or long since moved on to bigger and better things while the games live on supported by dedicated communities.

To answer the question, here was my statement of intent in creating the Level Editor:
1) The player (you) can design complex missions that the video game developer (me) can do.
2) Create scripted missions with a minimum of fuss and very little typing.
3) An easy transition between creating and testing (playing) your missions.
4) Share your missions for others to play in a couple of clicks.

Design complex missions that the video game developer could do

Each mission in the Absolute Territory campaign was created 100% with the Level Editor. No hacks or hardcoded workarounds. You can re-create the same mission I have made or you could go above and beyond to make more unique experiences.

[h3]Create scripted missions with a minimum of fuss and very little typing.[/h3]
Scripted missions are when some action or background event is triggered to start a new or repeating action. This could be spawning in enemy reinforcements or forcing a mission failed condition if the player didn't complete an objective on time.

Absolute Territory calls these Conditional Actions, which are made up of three components: Trigger, Condition, and Action. First, you create a trigger (the starting point for an action), define a condition that must occur, then add whatever action(s) is to take place when the condition happens.

You can chain up triggers where a logical progression must take place, disabling and enabling, allowing them to be repeated or called only once, or delaying the action from taking place.

This gives the Level Editor in Absolute Territory the depth needed for allowing the player to make missions more involved than placing down some random opponents. Though the limitation is the conditions and actions that are implemented and to add more would require hard coding, as opposed to a scriptable language that you could just write yourself. Yet, that is where the depth is while maintaining an easy to use interface, with visually understandable blocks (in effect) as opposed to lines of text for those who don't have a coding/scripting background. 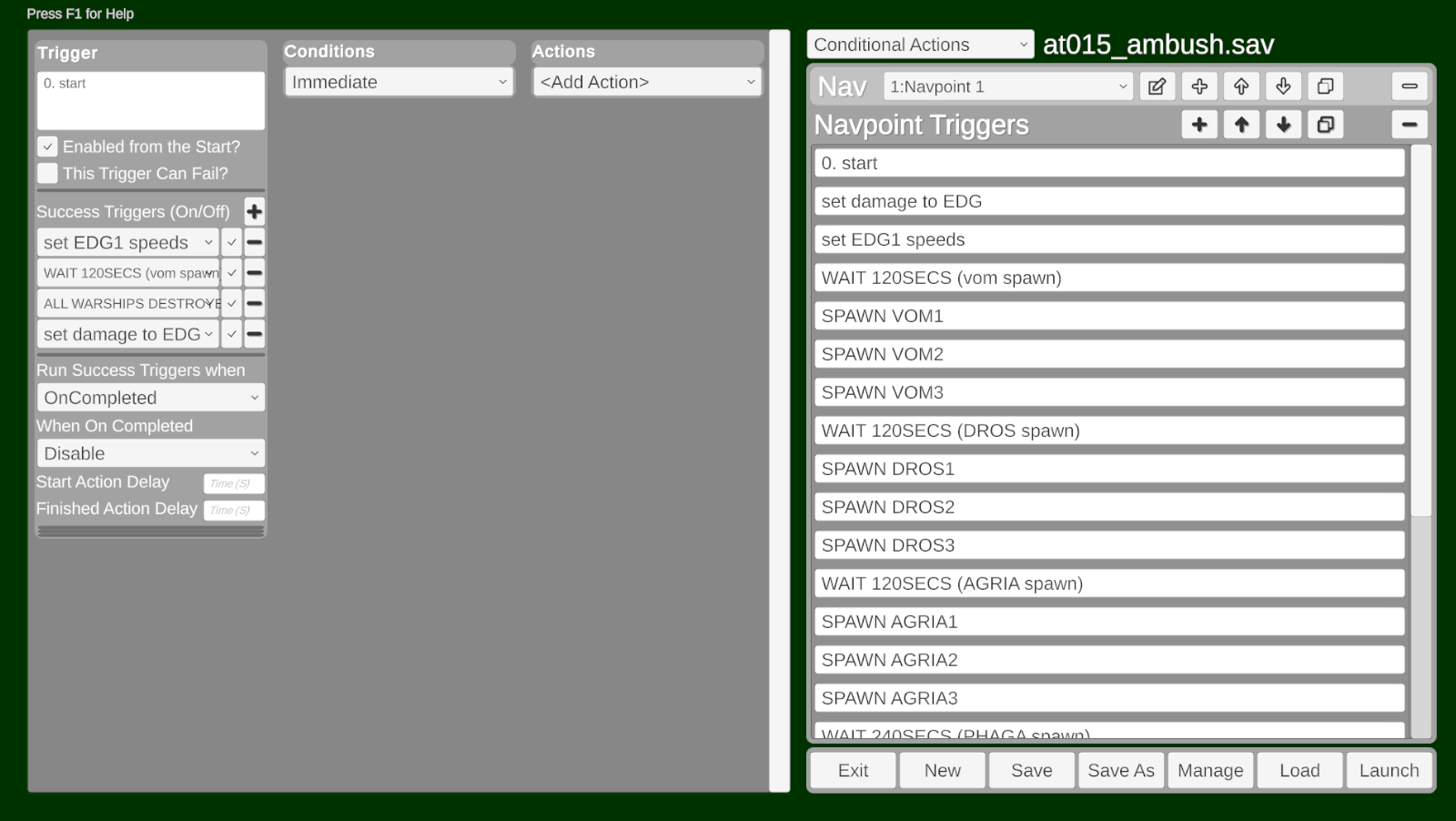 An easy transition between creating and testing (playing) your missions

You have created a mission and you want to test the results from within the Level Editor? Just click the Launch button. You are straight into the game. Play your mission, then exit out to continue working on your mission.

Ready to share your creation with other Absolute Territory players? No problem, from within the Level Editor hit F2 to bring up the Steam Workshop Publisher form. Fill in the title and description for your mission and click Upload.

Fancy playing another player's mission? Head over to the Absolute Territory Steam Workshop Community page, browse and subscribe. Then, open up the game, head into the simulator, and select Workshop Missions from the Game Type selection to see all the missions you subscribed to.

The Steam Summer Game Festival was delayed. Therefore the demo got delayed. As soon as the Festival is underway (June 16th) the demo will be available. I'm looking forward to reading your feedback and hopefully see some videos and streams of your gameplays.

Be sure to wishlist and follow to stay notified of the demo and full release and development updates!