The Official "One Year Since We Announced Kitty Galaxies" Update! Featuring: Voice acting of new languages and greebles!

It has been an absolutely crazy few months. So an update is long overdue. Warning: This is going to be a hella-long wall of text type post.

On the 17th April 2015 Kitty Galaxies was greenlit on Steam, meaning the game can be released on Windows, Mac, and Linux computers via the Steam platform when the game is ready. The game could not have done this without all of you being awesome and voting for it on Greenlight. Given the journey over the past year it honestly means more than words can convey. It has indeed been a difficult journey to get to this point and there is still a rocky road ahead, but I am grateful for all of the support you have given for the past three hundred and sixty-five days.

Kitty Galaxies was submitted to Steam Greenlight and unveiled to the world a year ago today. Back then the game was envisioned to be a much smaller game (and less grand an experience) than it is now in its current state. What was planned originally to be a quick three month project escalated in scale because the project had much more potential than three months would be enough to develop the game in.

The development has not been without multiple massive set-backs. There may be more set-backs in the future, but I will say now that one day the game will be released, and everyone who has waited will get to play it, and I hope that the wait will be more than worth it for you all. Honestly, I am in no rush to get the game finished, as I want the final product to be as good as it can be, rather than a rushed slap-dash boulder of lameness which so many games end up being these days. This game is as much a labour of love as it is a work of patience for myself. Although the game was first posted on Greenlight a year ago, the game was in development for a few months previous to that, so the game itself in at the time of writing (in terms of actual development time) is about 14 months old.

After the game passed Greenlight, I took a break from the main development of the game. The past few years have been a busy time for myself, so I decided to take a long-overdue and very much needed break from working on one project or another. Sometimes, you just gotta recharge your batteries, and the recharging was very much needed.

However, the batteries are now well and truly recharged, and I am looking forward to what the future holds with this little project.

As might have been stated previously, I would like to release the game in English, French, Italian, German, and Spanish. However, budget constraints mean that the game upon initial release on Steam will only be available in English. I wanted to make it so that dropping in a translated version of the game post-release would cause minimal problems, as (funds-permitting) I am planning on adding in the various translations post-launch.

Now, the question is, how could this be made even easier with what is planned for the game? Read on ...

Basically, for the in-game communications and cut-scenes, I was just going to record some garbage audio to be used in a way much akin to the radio chatter in Starfox (and also the unreleased Starfox 2), and like the Lylat language option in Lylat Wars (which was the European release of Starfox 64). The idea was that as long as the on-screen text is translated, and as long as it is made clear that the in-game characters are speaking an alien language, it does not matter what the audio sounds like. Since only the text needs to be changed, it makes any kind of translation job a ton easier! So that was the plan. "Was" being the key word.

Three weeks ago I saw a post on a Facebook group where someone mentioned a group of voice actors they had used in their game, I did a bit of research and within minutes the plan had completely changed.

The New Plan for the Audio (and Why)

So rather than just record garbage audio, I decided to distinguish the game from Starfox (which Kitty Galaxies has been compared to by many, and for good reason) by recording audio which was not quite English, but was not also random audio either, whilst also fitting-in with the comedic, ludicrous plot of the game. A lot of space combat games (including this one) have the whole "in-game video communication" thing, so given the direction of the game I decided to parody that somewhat with both the plot of the game, and also the "language" being spoken.

So who would be brave enough to undertake such a task (because let's face it, given the above direction most voice actors would run a mile for the sake of their career)? The ... VOICE ACTING POWER SQUAD!

They are a group of awesome voice actors who do a live stream on Twitch every Monday night where they record voice acting for indie games, and do a few other random spontaneous things too. I watched a few of their past streams and was completely sold on them! So I took the previous idea I had, and adapted it into something where I could use their talents.

As such, I spent a whole ten minutes (possibly fifteen) writing a guide on how the language of the game should sound. But in short, it is "sounds of the animal speaking, but the sounds being read out in English rather than the actual sounds". This was a great idea for two reasons:

1) Aforementioned translation implementation stuff being made easier to do in the long-run.

2) Due to the fact that the recording sessions would involve no actual proper script (just emotion guides), spoilers would be kept to an absolute minimum during the live-streamed recording process!

A win/win situation. What I was not expecting was the little guide recording I had made (at silly o'clock at night, so sounding exactly a thousand times more serious than I had intended to) to give an idea of how the language might sound being played on their live stream! XD So yeah, if you ever wanted to hear how I sound after very little sleep you should go check out the stream! But jokes aside, you should totally check out the stream, the team was hilarious and were a true pleasure to watch the next day (I was not able to watch the stream live, sadly due to time-differences between our two time zones, and my needing to be awake early the next day).

The stream can be found at Twitch.tv, (if the time bookmark in the URL does not work then Kitty Galaxies is on from the 2 hour 56 minutes mark onwards).

I will say that if you happen to be developing a game and are reading this (and are looking for voice actors) then these guys come with a top recommendation from myself! Also after following them on Twitch (which if you have not done so already then you should totally do right now) you should find them on Twitter at @vapsquad and then follow them for more of their voice acting antics!

So now the game has some awesome voice acting, let us talk about the graphics. Part of the problem with my being from a coding background is that I have had to rely upon assets made by outside providers for the 3D models and textures in the game. However my ethos for the use of such has been that if assets from outside sources are to be used, then they are all to be properly licensed, and used in a way which would distinguish their use from the potential use of the assets in other games.

Something which has come to the forefront in recent times is asset-flipping, where somebody takes an asset, and just drops it into a game, and then there, done, they call that a game and release it in a shoddy state which is insulting to the consumer. Although I imagine that this will be happening less and less as time goes on for games released on the Steam platform due to the recent advent of Steam's updated refund policy, at the same time I am very strong in my belief that a game that uses outside assets should always do their best to distinguish their game from the crowd.

With the above taken into account, over the past few weeks I found myself going back to the models that I have been using over the past year, and sprucing them up via the use of what is known as "greebles". These are fine details which add to an object’s surface complexity, making the object look more visually interesting. As such, I took some of the previously large flat surfaces on the models being used, added a bunch of extra objects to them, and now they look a lot different to how they looked before! Check these out:

Of course, these are only two examples, there will be plenty more by the end of development!

Adding Things Which Should Really Have Always Been In There 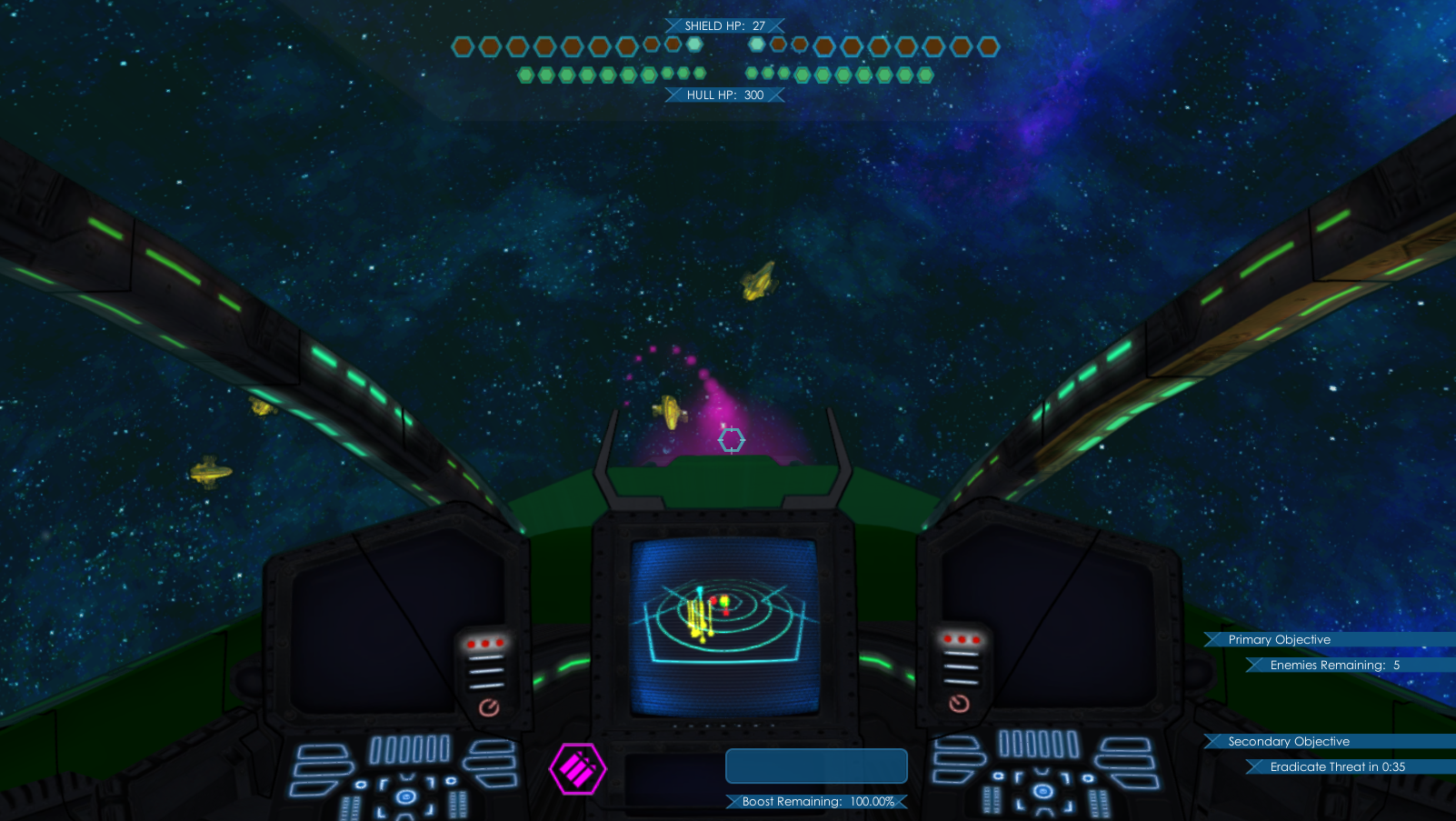 Almost Done For This Update

But before I sign off on this update I just wanted to note something. You may have noticed the change in tone in this update, from the writing being done using the "royal we", to a first-person perspective. I have realised that the whole talking in a 100% corporate way of referring to one's self in a third-person perspective is just not me.

I want to thank everyone for their support so far, there is still a long way to go, there is no release date set or even on the horizon, but I hope to bring you all a game that will be worth the wait.

And that brings this update to a close, if you want to catch up with Kitty Galaxies around the web then follow the Twitter account at @yanxengames, and if you have questions then send them in via out Twitter, or via the Kitty Galaxies Greenlight page or Indie DB page and I will try to answer as many as possible.

Sayonara until next time,

Amazing! really awesome! i sent a mail to you. Cheers.