Today we are happy to announce that third update for Kingdoms is almost ready and will be available very-very soon (25-30 of April). We've spend much more time making it, it took almost all our strength, but we really hope that all new features we've added won't disappoint you.

To show you how work was going we decided to make today's announce in the following way: three of us, me as programmer and designer, our modeler Alex and concept-artist Mary will tell you about our part in developing Kingdoms.
So, let's start!

During the period we've been developing this update, we tried several absolutely new game mechanics, most of which will be available in coming update. Let's take a look at some of them.

Gaia is technology of procedural terrain generation for Unity. The results of using Gaia are really impressive and I thought: Why not? 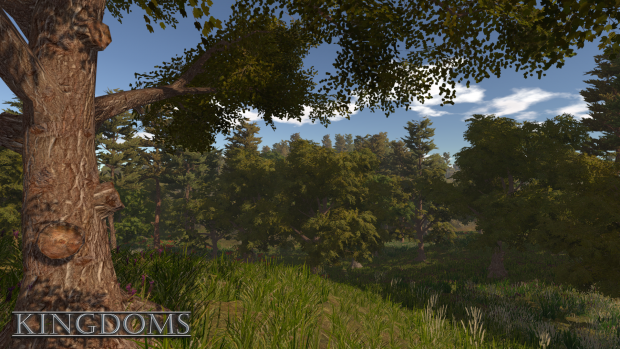 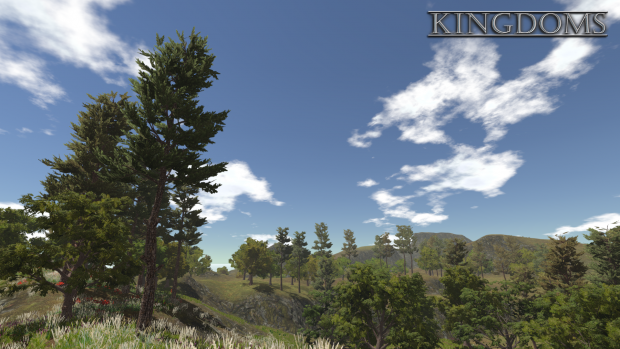 We've created test build with using of Gaia generation features, if you like to try it just let me know in the comments and i'll upload it to our IndieDB page.
Unfortunately we can't use Gaia in Kingdoms at the moment because at its current state Gaia supports only single terrain edit. Terrain in Kingdoms consists if 16 connected terrains, and this makes using of Gaia impossible. Though Gaia developers say that version 2.0 will have multi terrain editing feature, and when it will be released, it will be added into our game. 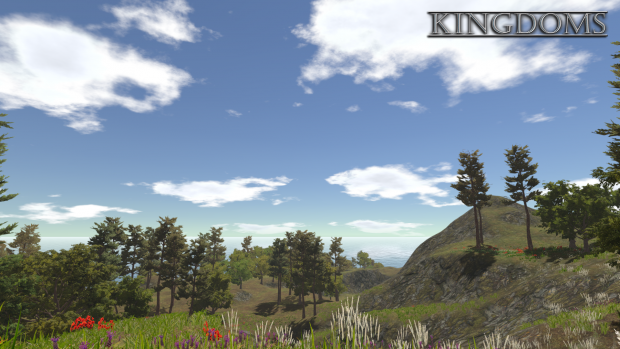 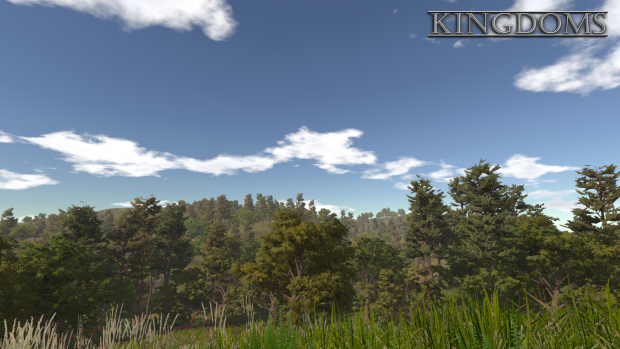 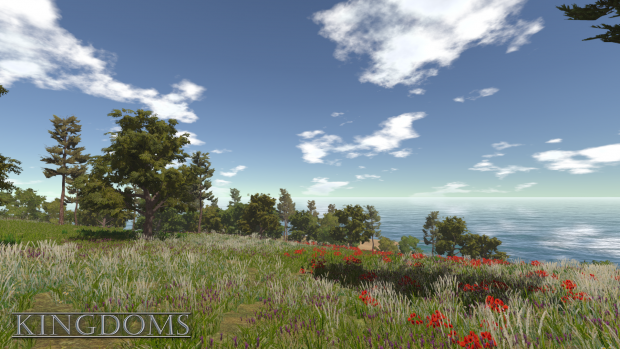 The main goal for me as for programmer was the creation of believable AI pathfinding algorithms. To achieve that we decided to use one of the best (best, actually) solutions for Unity - Astar pathfinding.
This algorithm allows AI to find the best way to its target - no more "ghost" npcs and animals. Achieving of this finally allows us to create properly groups moving algorithms and small battles between these groups. 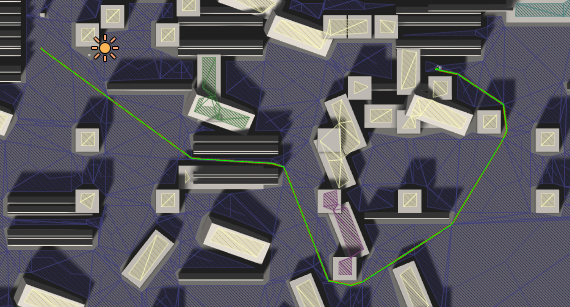 The most tricky moment is that Kingdoms has procedural environment - all objects have random scale and position in every generated world. That means that pathfinding navigation grid should be generated in the real time at players current location, that makes using of it more dificult than just one time nav grid generation at game start.

Besides, our in game houses and its interiors with multiple floors also make navigation grid generation a very hard task. So, the most time durig the development of this update i spend trying to create such navigation system that will suite our kind of game - random generation with quite complicate architecture. 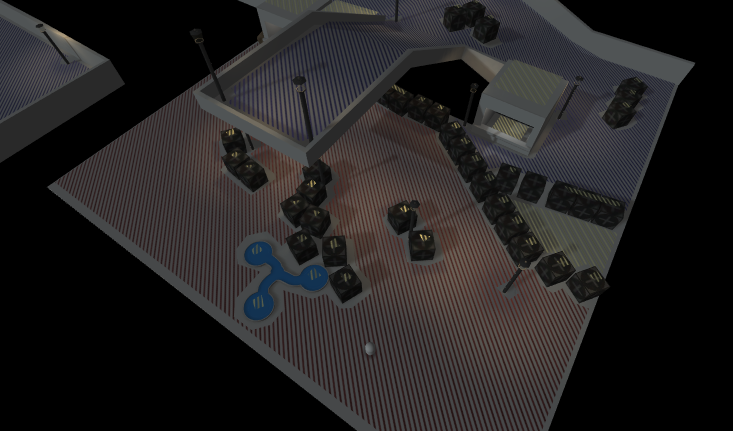 Inspite of this fact i've make all this stuff to work properly - no more flying deers (bye, Santa, i'll miss you), npcs totems near task-boards etc. 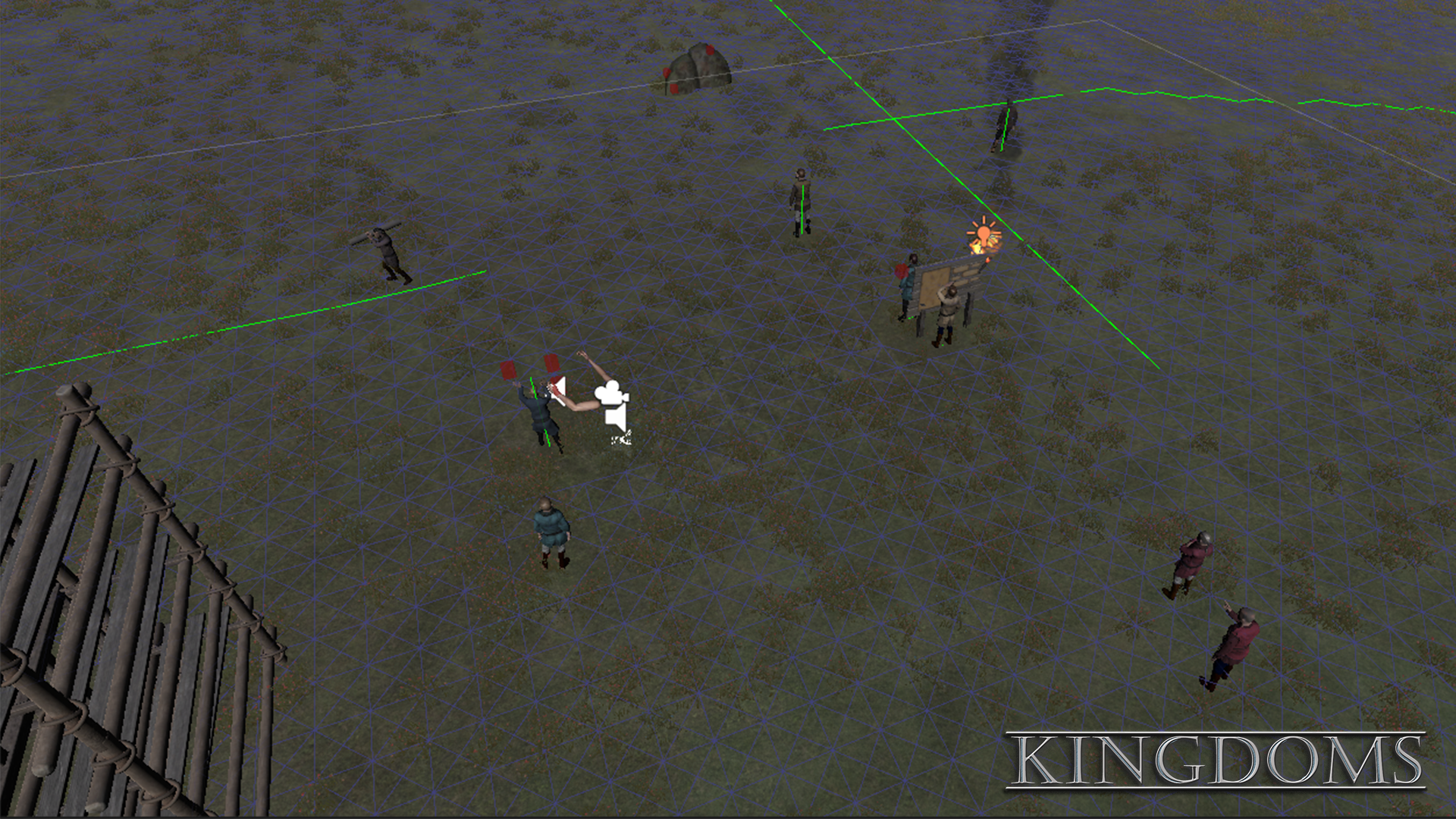 Understanding that only pathfinding is absolutely not enough for update, that was developed for almost 2 month, i decided to add something important. Initially the plan was to create tavern and path system, but it would take another month, so we decided to change 4 and 3 update and create caves. As any aspect of Kingdoms caves will be generated random, so you won't explore two similar caves - each cave is unique and have unique reward after exploring it. I'm sure you'll be exited about it! 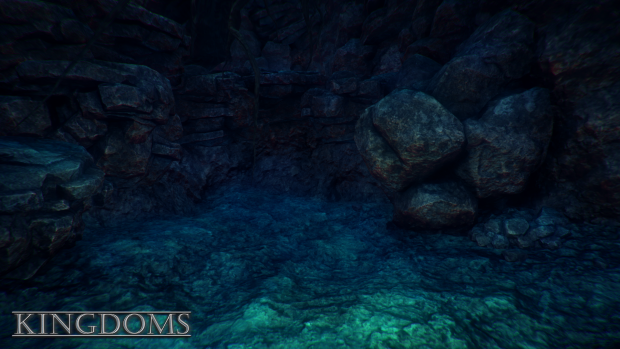 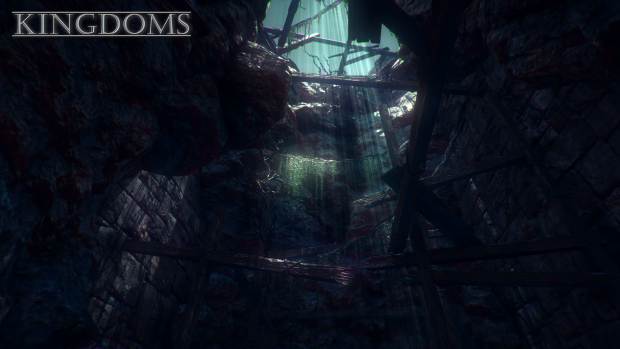 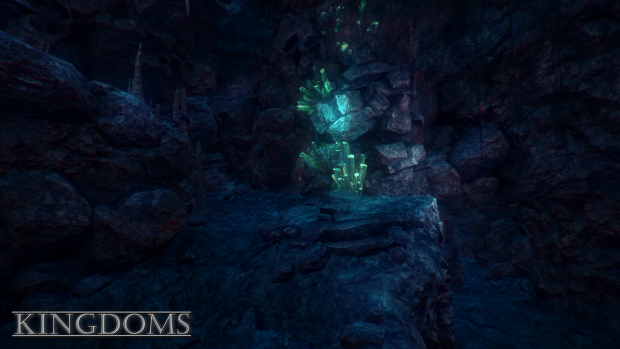 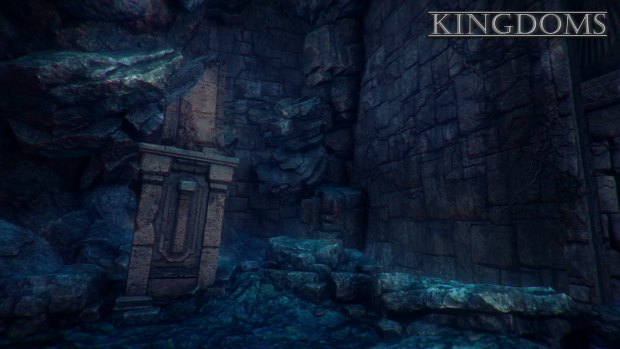 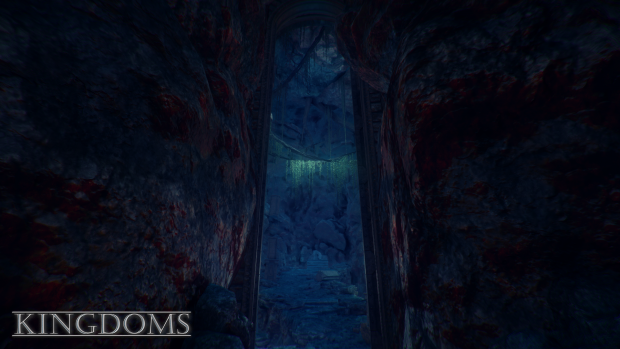 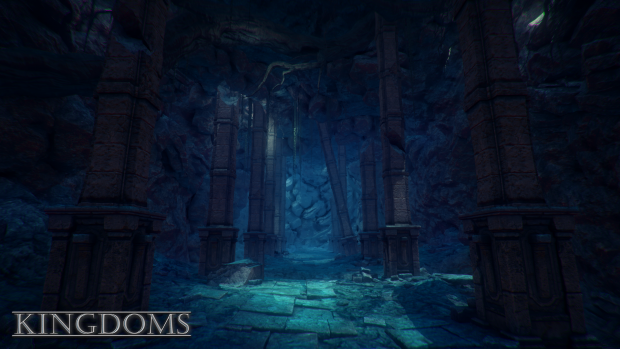 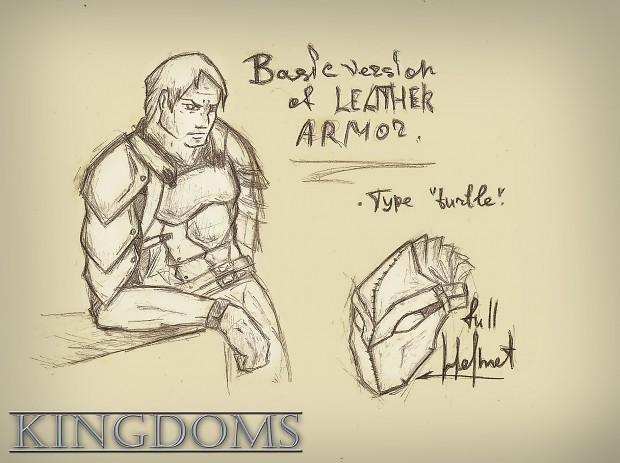 The illustrator’s work is about catching balance between historical references and the game logic. I am reading books about outfit development in history and spending all of my free time to surfing over related sites and same looking for information. I have to say that it is very interesting!:) But the most basic task of the artist - not to drown in the endless streams of information and weed out unnecessary to emphasize the point.

In the upcoming update we prepared for you a little surprise – first NPC outfits. From now on NPCs will be more individual and more real. 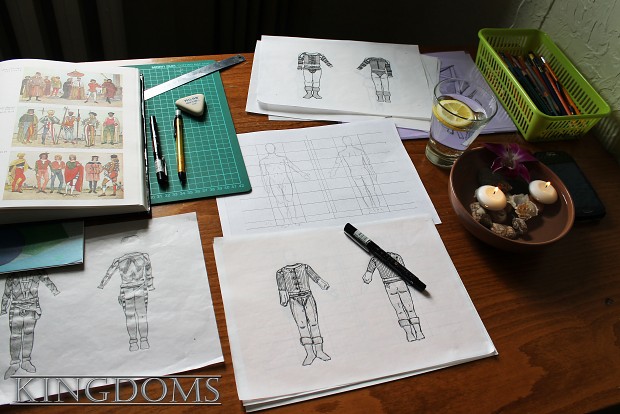 The process of creating the concept for NPC's outfits looks like this: first of all, creating a series of trial sketches, then sketch clarifies the specific details, after the completion of a sketch drawn up the "Help" - usually a text complete description and a set of pictures, for references.

Currently NPC's outfits are divided into groups such as: the farmer, the poor citizen, citizen in average income, a rich burgher and patrician. The differences between the costumes of different segments of the population most often are in materials, but else there are special elements inherent in a particular class. 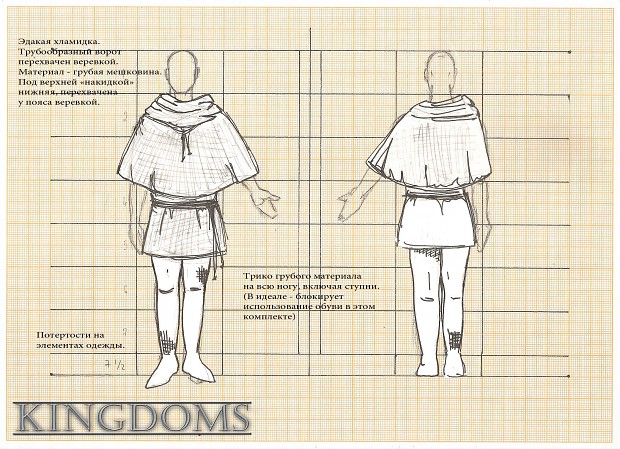 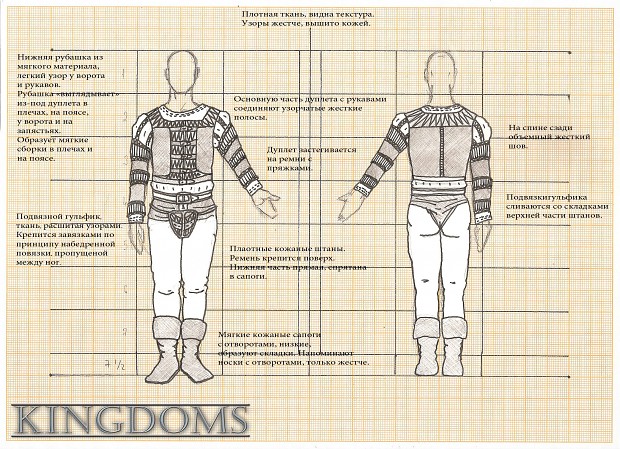 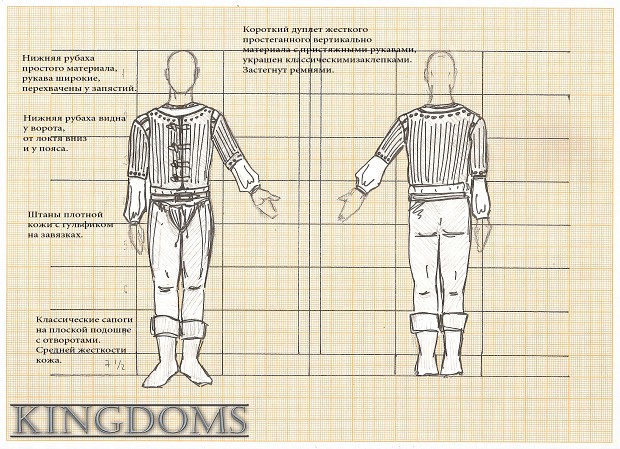 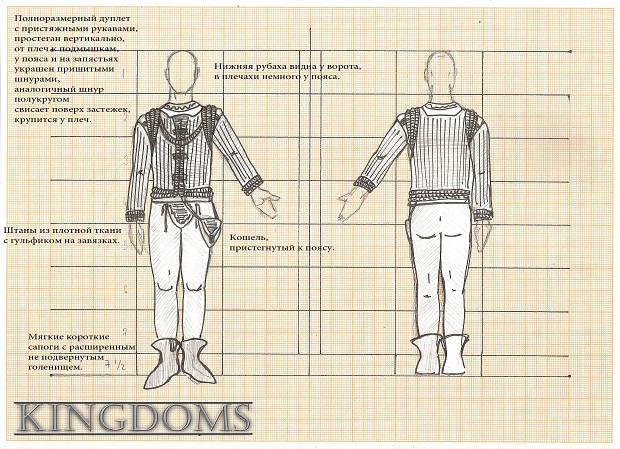 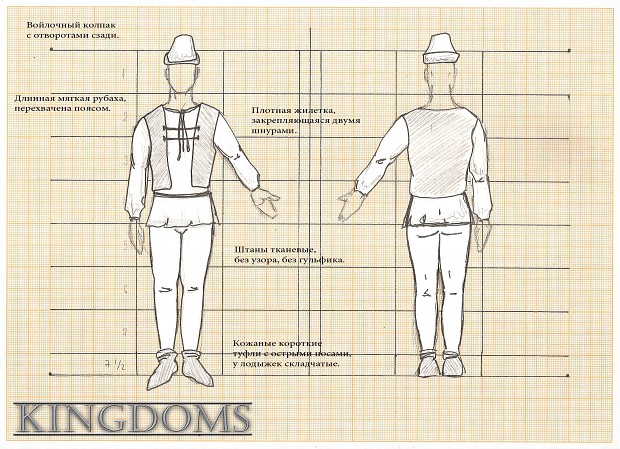 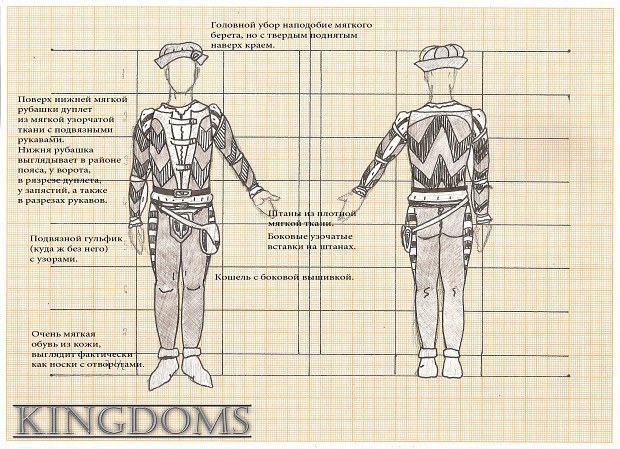 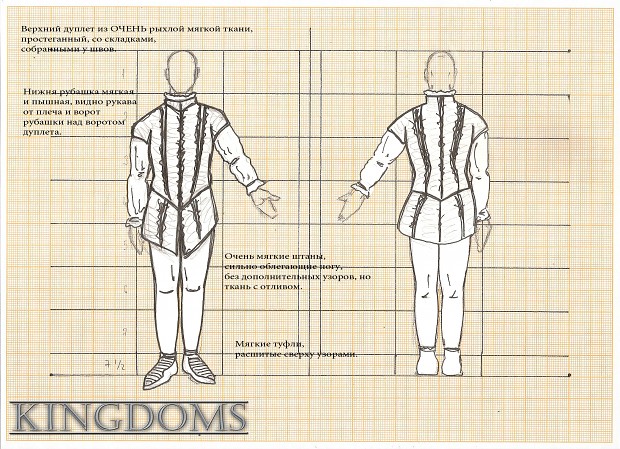 I also started to work on the creation of armor sets. As in the garment creating, I'm looking for historical information and learning principles of medieval armor. The difficulty is in the fact that the word "medieval" can’t describe the diversity of forms of armor that existed in different ages, in different countries, different types of troops and etc.

For example, the Italian mercenaries in the 13th century loved to decorate their armor colored ribbons with mottos and emblems. These tapes can be read and tell about the mercenary career, his battles and etc. However, the paradox is that if we try to move all these items to the game unchanged in pursuit of the "historicity", we can lose the "historicity" of the general form. Therefore, here, as in the creation of clothing, needs a balance between historicity and practicality. 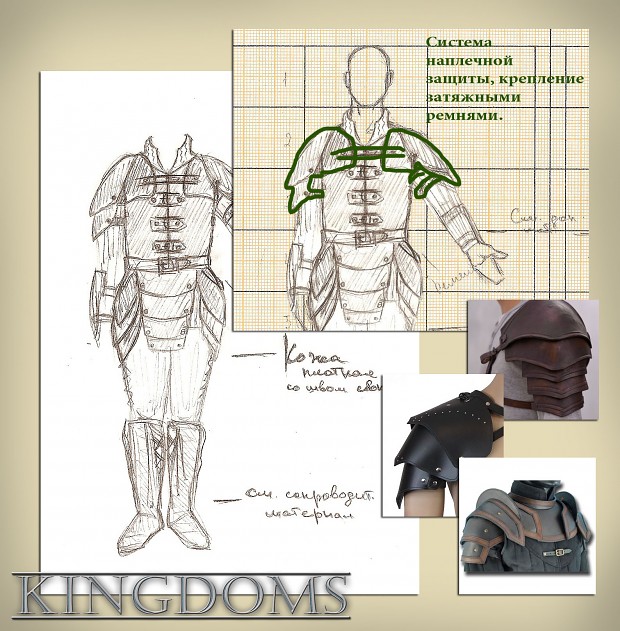 In the near future I will expand the range of variations of clothes and armor, as well as paying special attention to costume patricians. Notable medieval feudal lords were amazingly interesting costumes! And decorated with fur and jewels, which are widely used in creating their costumes, certainly result in the horror of our animator, when it comes time to animate effects of clothing materials :)

And, of course, the best (for me) part of the plan for the near future - the beginning of work on women's costumes. I'm looking forward to. And you?:)

We are developing a prototype of NPC, a completely new model for body, clothes, armor. The new body will have the ability to change it's shape including face and body structure.

Body and armor - each model is created according to the sketches which are formed on the basis of information about the fashion of the time, we try to recreate the clothes and armor. In the production uses the familiar technology - creating of high poly model and its optimization for the game and as final stage - texturing. All clothes will match to the selected configuration of the body parameters of the character. In the game the player will be able to use any element from any suit, without restrictions on the sets.

By creation of the body we are useing morph animation technology to add customization features of the face, body shapes and emotions. This technology saves a lot of time and resources in the process of the development. 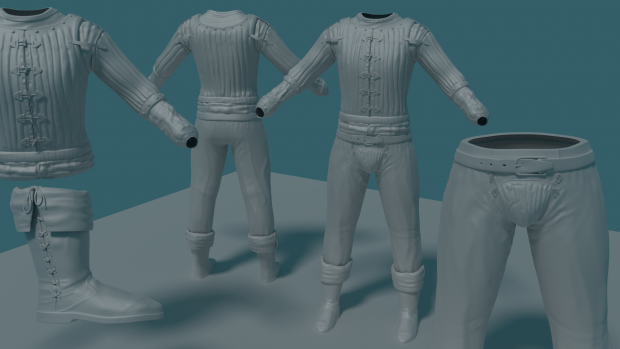 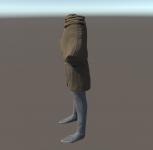 You guys are doing an awesome job, keep it up!

Looks great! And I'd love a download on that GAIA project :)

Glad to see Gaia will be used. It can create some truly beautiful environments.
Can't wait to see the results.

16 connected terrains is massive, though. How big are the terrain tiles and what are you using to stream the tiles at runtime? Are you using an asset from the Unity Asset Store or a custom solution?