Hey guys, I've got an update on my latest project Killing Horizon, my epic 64-player-online-RTS/FPS/TPS hybrid! I've been working almost 24/7 on the game since the last update, guess it has been about a month. This is going to be a huge post so buckle up, we're going to hit on just about every aspect of the game!

Hey guys, I've got an update on my latest project Killing Horizon... my epic 64-player-online-RTS/FPS/TPS hybrid! I've been working almost 24/7 on the game since the last update, guess it has been about a month. This is going to be a huge post so buckle up, we're going to hit on just about every aspect of the game. In a few words - I've got new concept art of the first levels, and have written or updated major systems in the game such as: full vehicle physics on all 4 vehicle types, dome/shield rendering, NPC indigenous aliens, volumetric muzzle flashes, finalized interior lighting system, skid/track marks on the vehicles, and about 100 other items....and if you don't believe me, check out my todo list :-l

Oh, also before I forgot, I just created a Facebook Page for Killing Horizon, so go like it now!

Concept Art
Below you will see the first 3 pieces of concept art for Killing Horizon, the first one is of the Deadpool Arena, the second is the Reactor Arena. The third larger image shows a battlefield, and some Legion shields. Any comments or feedback are welcome! Click the image for a larger version! 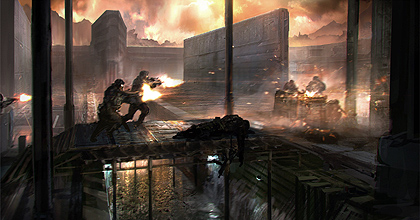 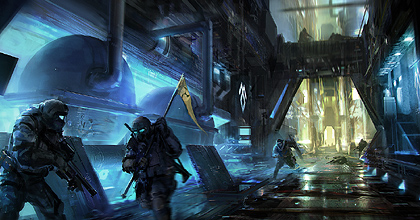 Interior Lighting System
I've not really shown any of the interior scenes or renders I've created for my game engine, so allow me to do that :-) I wrote a totally custom rendering system for the interiors centered around a shadow map atlas system. This allows me 10 shadowed lights, 10 lights per model, and unlimited lights per scene. I don't want to *nerd out* too much here talking about the technical details of the lighting system, but if anybody has any particular questions just shoot me a message, or post below! The image is labeled and should be reasonably self explanatory. I also did the modeling for the level, so ignore my programmers art :-) The 'Reactor Arena' pictured above will make heavy use of this technology. The image below shows how the system works on my 'Training Level'. I've never had an interior system like this in any game before, I want to have levels of this detail combined with my massive 9km^2 landscapes in massive 64-player battles... 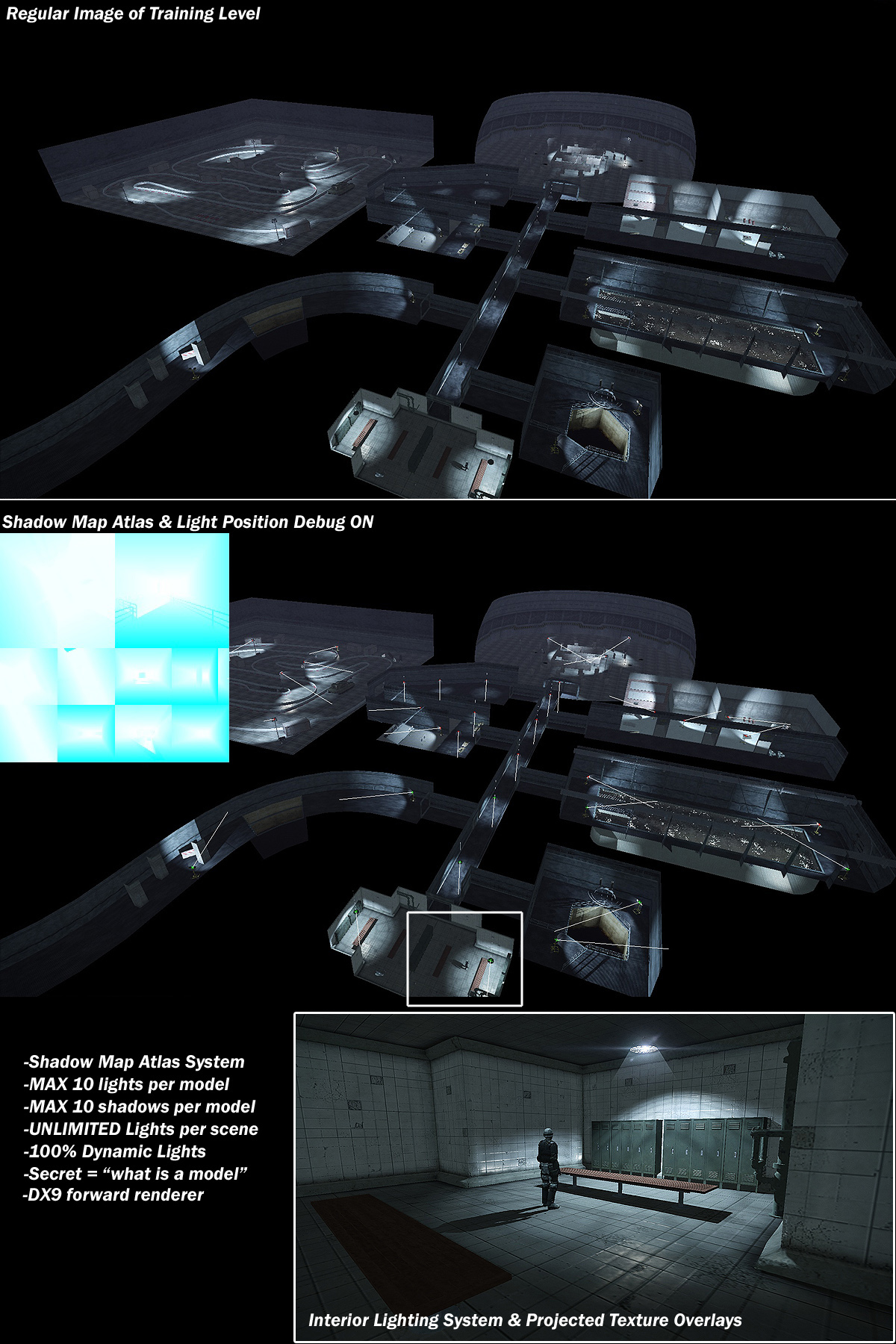 The lighting system above also lets me do dynamic flashlights etc, check it out...

Volumetric Muzzle Flashes
I've been using just a simple quad mapped with a texture of a flash, for every single one of my games. This creates some artifacts when shooting guns from fast moving vehicles, etc. So I figured I'd created a 3D mesh for every muzzle flash in the game 8 weapons, 3 vehicle weapons, and the defensive bunkers and turrets. It looks SO much better than before :-) Honestly there is hardly anything I'd really want to change on the system. Below is a screenshot of how it looks on several of the human weapons in the game.

Vehicle Types in Killing Horizon
I've not really talked about the vehicles that will be in the first Prototype release of Killing Horizon, so let's take care of that now :-) I've got a Dune Buggy for recon, a Cargo Truck for transporting resources, a Battle Tank for serious business, and a HMMWV/Hummer for medium stuff. Only the Hummer and the Tank are armed with weapons right now, but I have plans for a 4 pack rocket launcher on the Dune Buggy. I'll paste an image showing all four of the vehicles on the primary Martian landscape... 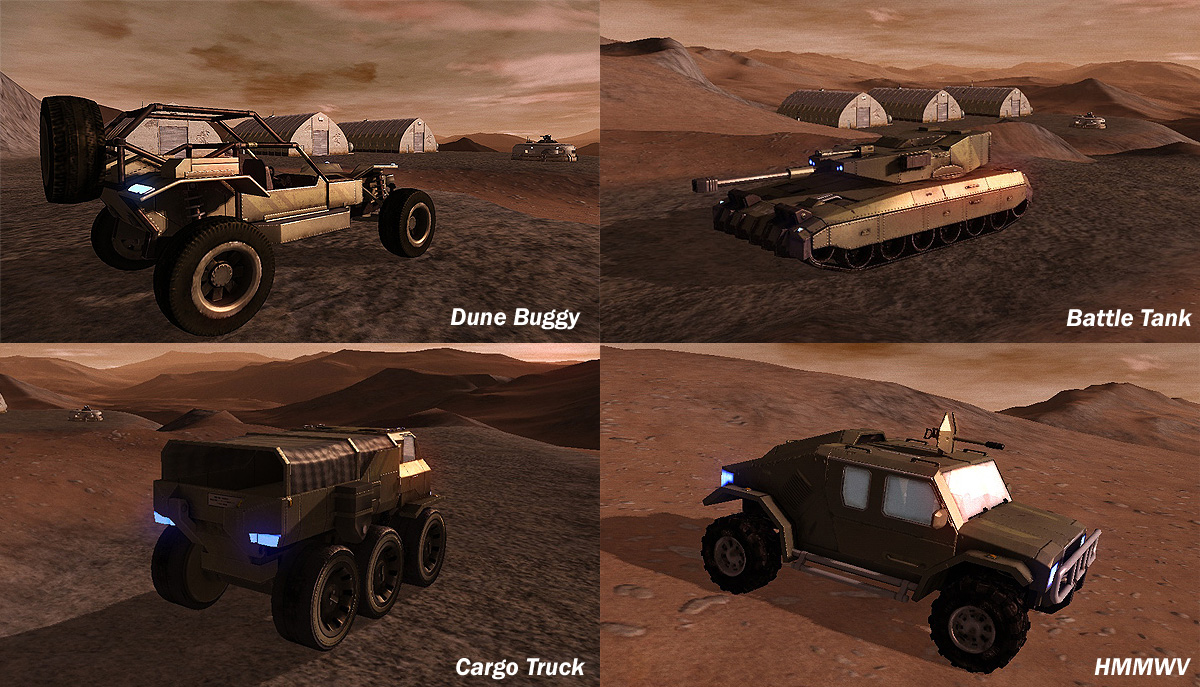 Vehicle Physics
What good are all those vehicles without awesome physics to go along with it? I've written an entirely new physics system in my game engine, EVERYTHING, you name it, has physics on it. Due to optimization of the constraint placement, and exporting of all physics parameters to easier to tweak .xml files, it's been a great success! The main issue with my previous physics system [ why I had to fudge it for Gettysburg: Armored Warfare ], is because they were unstable at low frame-rates, below 24FPS the vehicles would gyrate and fly off into space. So I had to hand code a work around before the game shipped, what a nightmare. This new system is nearly perfect, and is stable down to 8 frame-per-second. I added a fake "lag" feature so I can test the game at absurdly low frame-rates. The system is VERY stable, and the Havok physics integration is nearly perfect. This will lend itself to some great videos later on. Until then please be happy with this image of a bunch of objects stacked on top of a Cargo Truck :-) ... just wait 'til you guys see this in motion... 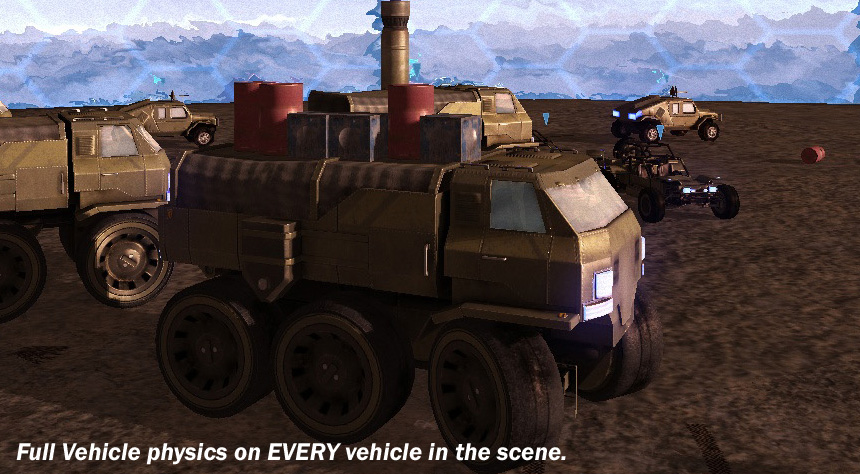 Oculus Rift
I have the Oculus Rift Virtual Reality headset 100% integrated into my game engine, I'm going to post a dedicated update about it soon, until then here is an image output using stereoscopic rendering to an Oculus friendly format :-) 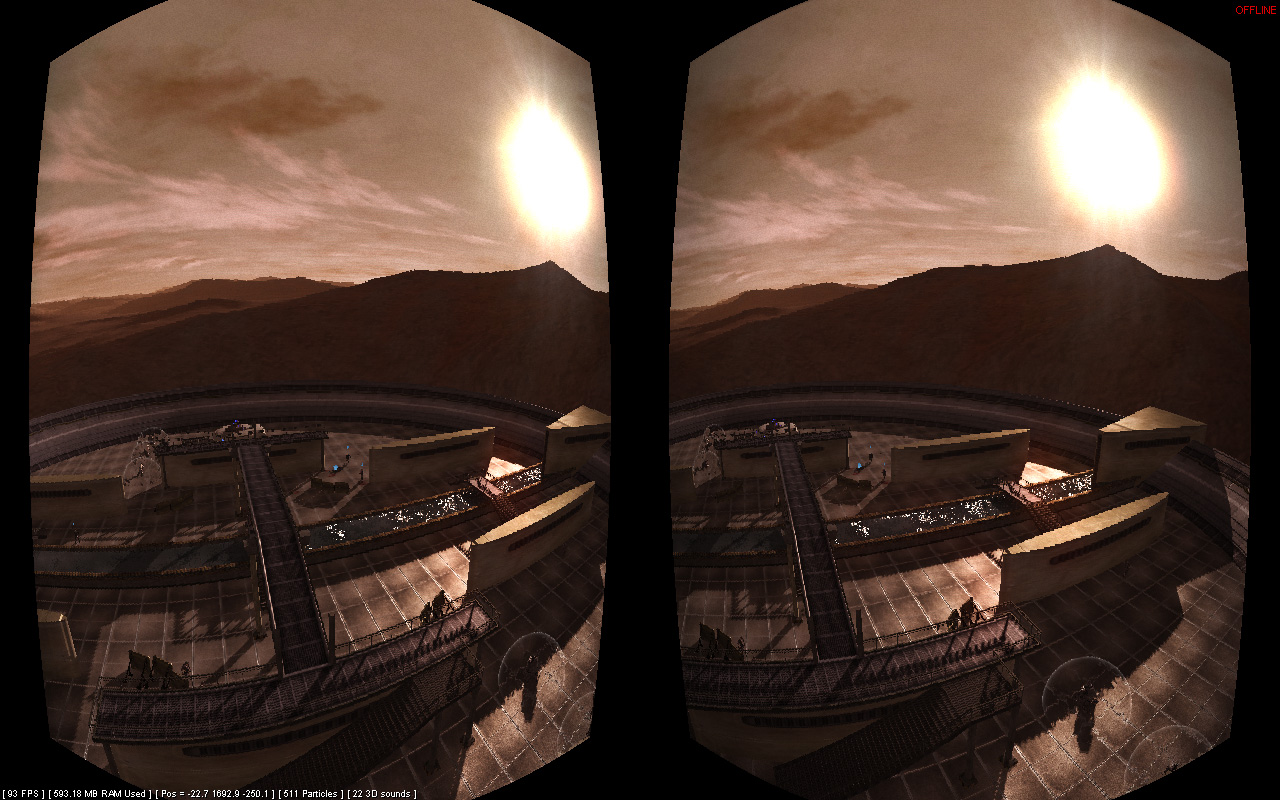 Indigenous Alien Mobs
One thing I thought would be really cool, is the have tons of alien creatures all over the massive landscapes, this way it wouldn't just be boring terrain, there will be hives of Creature XYZ in each environment of the game. For the Martian Landscapes, I've decided to go with the sand scorpion ;-) I've programmed flocking and AI evasion already, they are scared of vehicles and fire. LOL. This game already "feels" more fun than anything I've ever created, and it's in the PRE-PRE-ALPHA stages... here is an images of my sand scorpions btw. 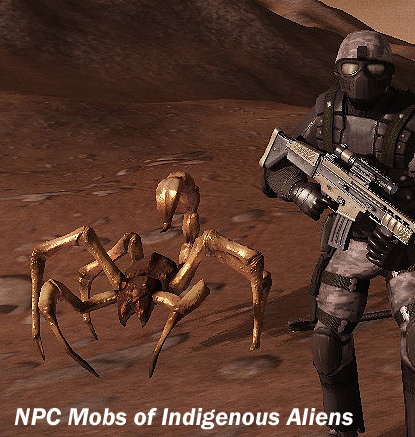 Vehicle Skid/Track Marks
Figured I'd break things up with the Aliens ;-) back to the vehicles...I've added about 10-15 different effects from suspension sounds, first person cameras, unique engine and screech sounds per-vehicle, the list goes on. One of the main things I added was skid/track marks behind the vehicles when you pull the e-brake, or when you lose control of the vehicle and skid. It senses the friction values passed back from the Havok physics engine, and uses those values to determine if the particular wheel is 'skidding', the obligatory screenshot...

Shield Rendering , 3D World Cursor and Decals
If you noticed the awesome shield in the concept art at the top of the post, that's good. I'll post an image of how it looks at the bottom of this paragraph. Also you'll notice the debugging lines that represent the trajectory of the current weapon. Also a 3D world-space cursor at the ray-hit point. This is a great way to do aiming on the Oculus Rift Virtual Reality Headset, which I've fully integrated into my game engine. Will make a separate post on the Oculus btw. You'll also notice in the below screenshot, another new feature to my engine, which is decals on dynamic objects like vehicles and animated aspects of the scene. Now you can rake a vehicles windshield with bullets and they will stay there. 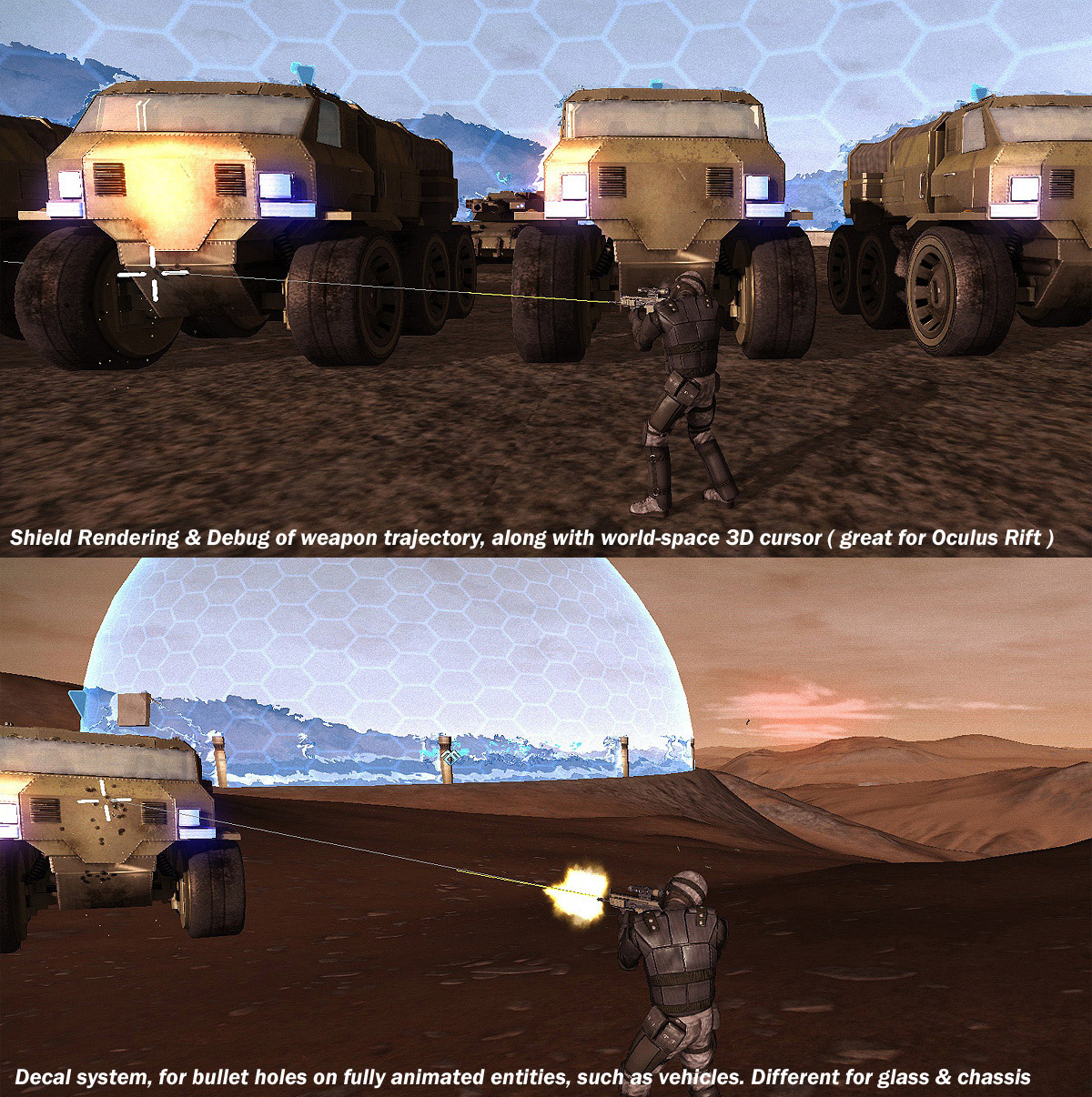 Console search system, and a new mouse cursor
This is probably the nerdiest part of the whole update. To get the cursor to show up properly on the Oculus Rift, I had to move it into a 3D plane, which is 2D during regular game rendering. This means it can now be a fancy image/effect. Also I have an in-game developer's console, and I was always forgetting the names of my in-game variables and commands...so now I have a real-time strstr() output of all commands that macth a subset of the string typed into the console at the time. So typing "gv_" would show all the game variables in the engine. Check it out... 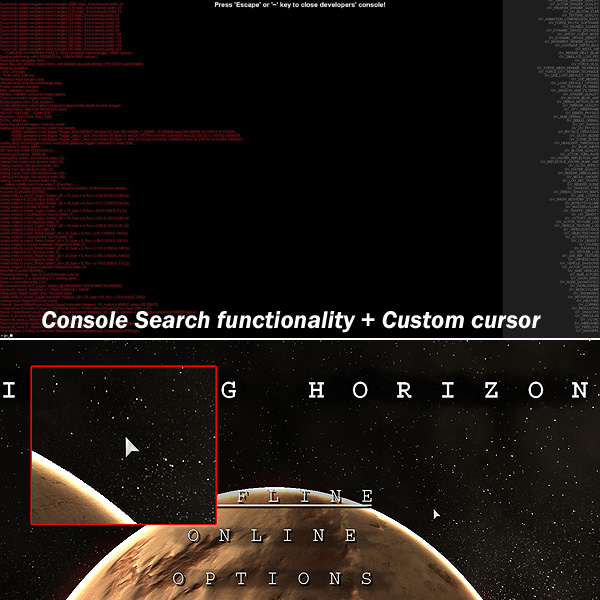 Well like they say, a picture is worth a thousand words. So I just saved my ass some time. Thanks a lot if you've read it this far. Please register on my site, or follow the game on facebook. I'm self publishing this one so I'll need all your help! Thanks.

Awesome update, looking forward to getting my hands on it!