I am the lead designer for a game called Kana Quest. I thought I'd write a post quickly explaining what the game is, what its about, and why I wanted to make it.

So what the hell is a Kana Quest?

So first thing's first. Kana Quest is a kawaii Kana match-em up. Kana is the word for a phonetic letter in Japanese. In Kana Quest you match the sounds between different Kana to solve puzzles. So yes this is an educational game for learning the Japanese phonetic alphabets. However a lot of educational games, you would not want to play if you weren't interested in learning the content. Kana Quest however has been designed as a game first, and I think the gameplay speaks for its self once you start playing it.

So much so that I can give the game to native Japanese speakers and they have a blast. In comparison, I could not give duo lingo with learn Japanese selected to a Japanese speaker and expect them to have fun.

So how does it work? It works by utilising a strange quirk of Japanese. Most Japanese letters consist of two connected sounds. A Consonant, and then a vowel. So for example, か is read as "ka". In the game か can match with any other Kana that has a "k" or an "a" sound. When every letter in the level is connected via matching sounds... that's when the level is done. 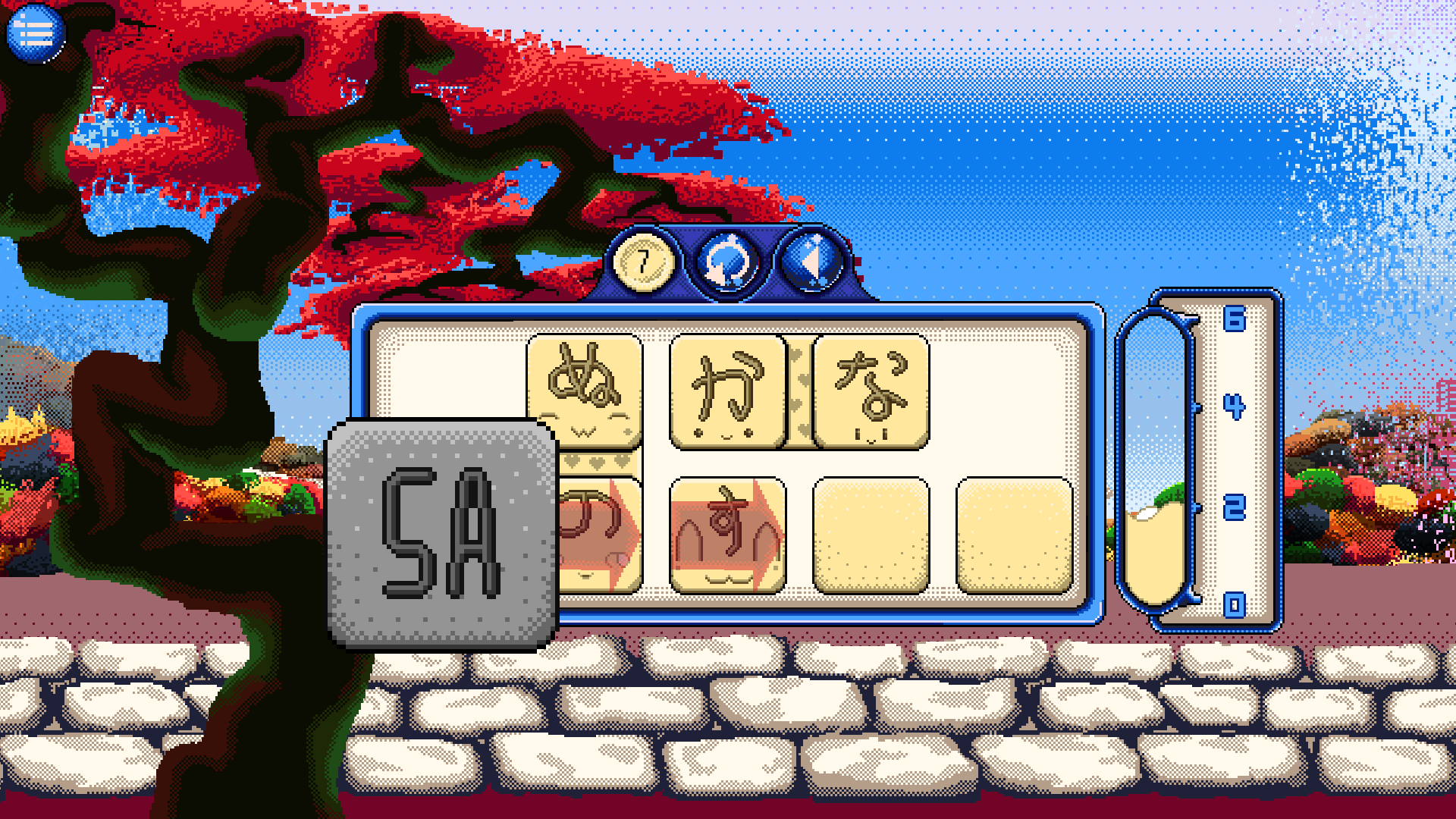 Why did I make this?

So I wanted to make Kana Quest for a couple of reasons. First is I do speak Japanese myself and it is a topic that I am intimately familiar with, but also I feel as though a lot of educational games especially language especially fall into the trap of making pop quizzes but with pretty art. And don't get me wrong, those game a very powerful learning tools, but they always leave me wanting in terms of a gameplay experience. And something I realised over the course of making this game is that no one wants to play an educational game. They want to play whatever their favourite game is for 20+ hours, and then be like Neo saying "I know kung-fu". And the best way to achieve that in my opinion is to make a damn good game that uses mechanics that naturally lend themselves to the content you are teaching. In the case of the Japanese alphabet, puzzle mechanics worked the best. If I were to teach Kanji (the Chinese characters in Japanese), I would use a completely different set of mechanics (For those of you who are interested I would make a Kanji game uses crafting mechanics as Kanji are often combined with other Kanji to create new meanings. E.g. 木 = tree, 森 = forest (this has the character for tree written 3 times). 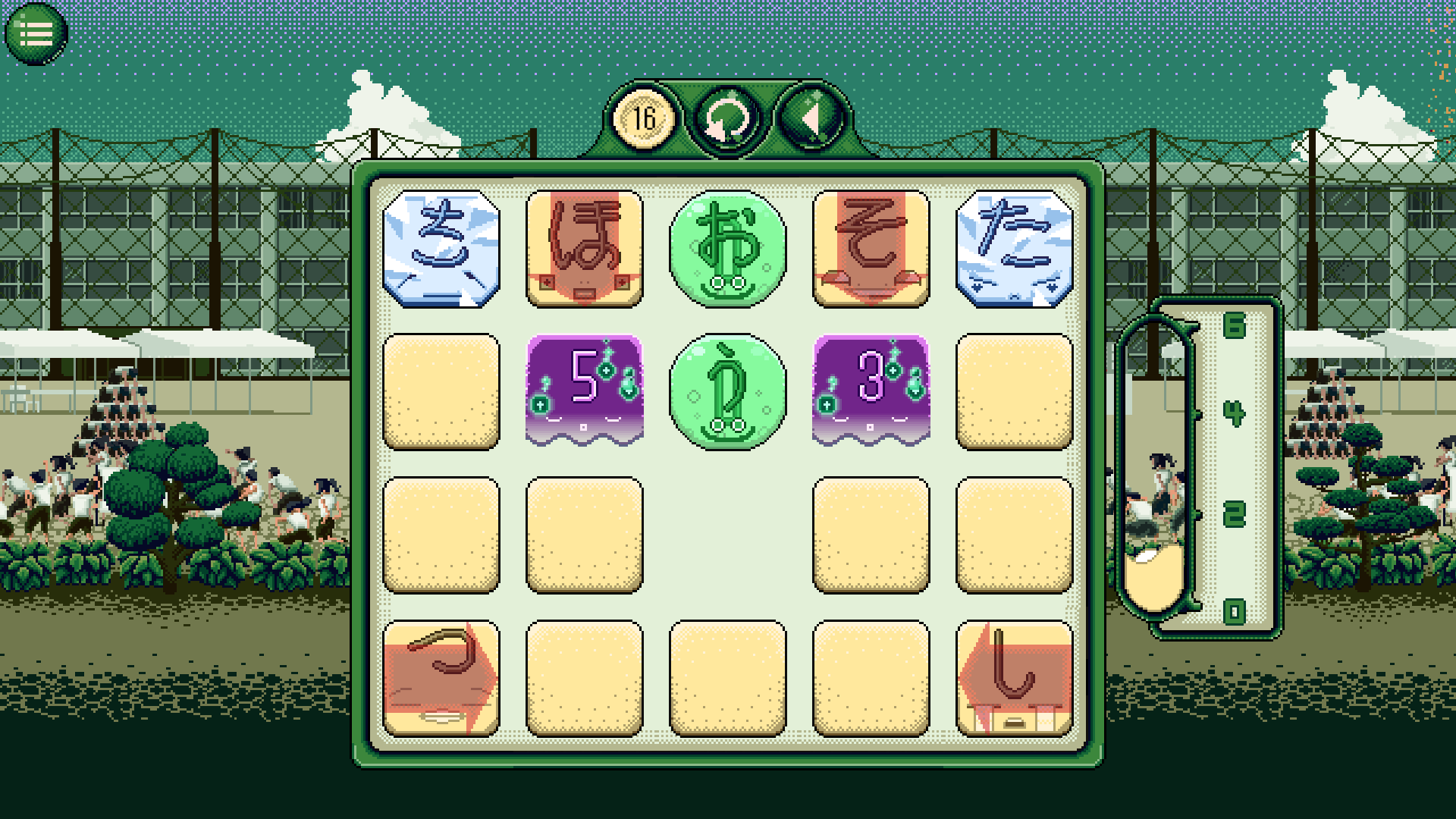 What are some of the visual inspirations in the project?

Well a lot of the visual inspirations for the game came from my own experiences from living in Japan as an English teacher (the image above is of the high school I used to work for). And I felt as though a lot of media about Japan (especially by foreigners) sort of fell into two large tropes. Either is was Samurai and Ninja everywhere, or it was very super modern anime visuals. And I felt that this sort of left out a large chunk of the more mundane parts of Japan that are no less beautiful in my opinion. So there are lots of small little Easter Eggs of small little parts of Japanese life in the backgrounds, like the kids have their Undoukai (sports meet). And I decided to go use pixel art as pixel art can often give a wonderful sense of age to things. And that is something I found a lot in Japan, not that things are decaying, but there is a sense of age to a lot of things in Japan. Very few things feel sparkly and new there. And I think it gives the country a lot of its charm, that sense of things are old, but they are well cared for and I love that.

I also decided to give the Kana a lot of personality, quite literally.

I decided to give the Kana the faces because, they are what the player looks at most of the time. And I wanted the players to connect with the Kana. And also giving them those cute little faces gave the game a lot of its charm. And it allowed me to connect into another part of Japan's culture: the mascot characters.

So, now you know about Kana Quest. If you have any questions for me please drop a comment or a message to me and I'll get to it as soon as possible. And if you liked the look of Kana Quest please consider wishlisting the game over on Steam:

awesome concept. a great way to introducepeople to learning languages !!!!
with simple ways.. . perhaps sylables . for a twist on common 3 match. as a way at advancer stages .. to differentiate. lower and top/difficult streange obscure words, if that .
can maybe leveraged into help for sat tests /and whatever the common denominator there target, is of .. . / oh snap, and sounds have to come into play. i guess obviously. .. side note of tones , structures .. local . . braching. brancing. wtf. branching.