The Coin Game is a ticket redemption arcade game with realistic physics, goofy robots, open world design, a global ranking system and lots of silly prizes. The game includes 15+ modern inspired arcade machines and a pawn shop to keep money in your pocket. The Coin Game is made by a solo developer.

KABOOOM! Fireworks, fuel, robo friends and refresh of ALL leaderboards! 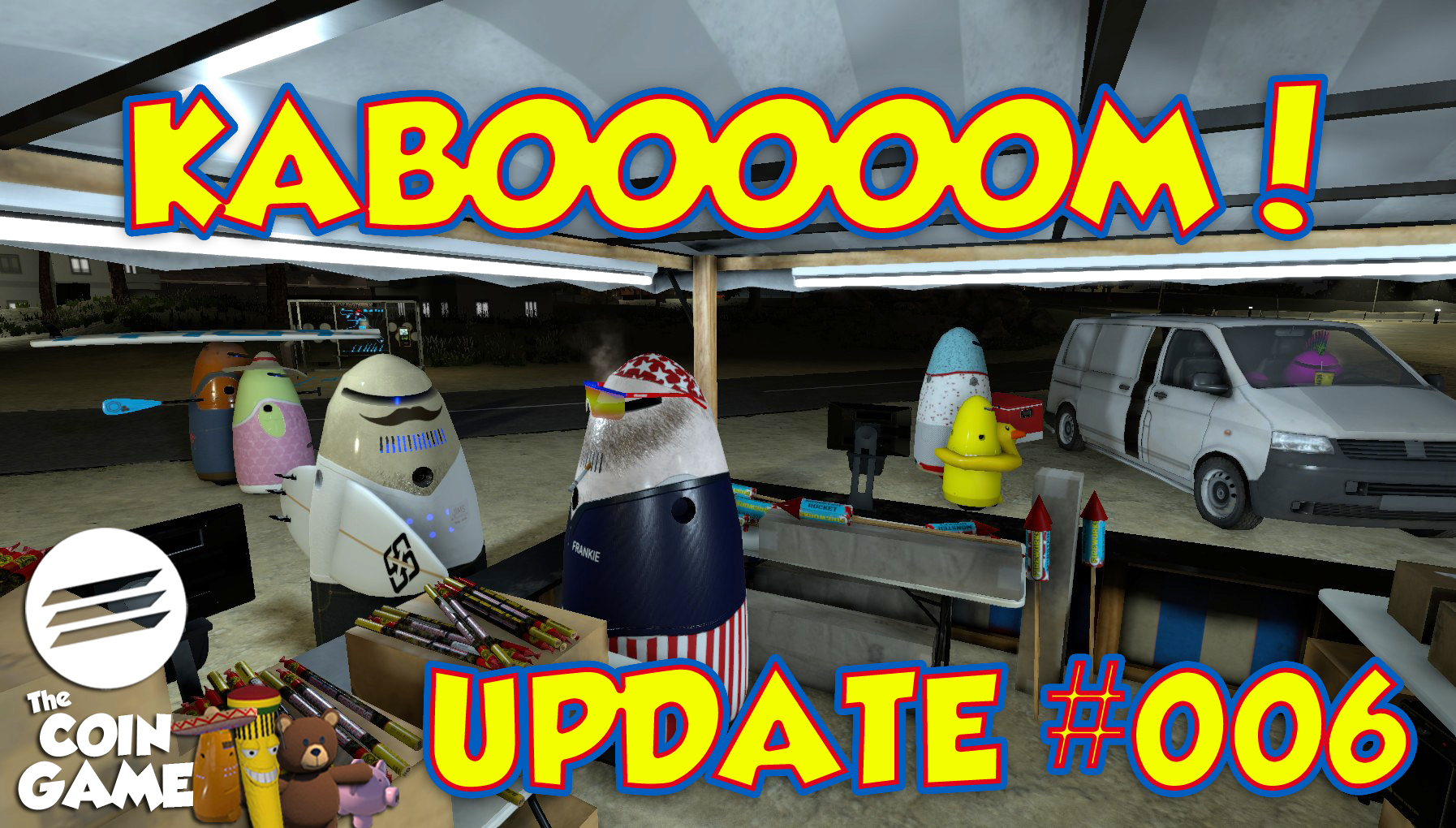 Over the past 30 days I have touched almost every aspect of the game tweaking and fixing the little things that make big differences to enjoyment and flow of the game. I also threw in a bunch of new stuff to have a bunch of fun with.

- Fixed the leaderboards not updating at Larry's Arcade and also made it so you have to pick up your tickets that you just won from each machine. After the game is over the the ticket dispenser will drop your tickets right in front of the machine. (obviously only if you won some silly). You then have to pick them up (F KEY) and take them to the ticket eater before you can spend them. There is no way that Larry is counting all those tickets for you. Not for $8.25 an hour anyway.

- I also had to RESET all leaderboards and all save game files. I am very sorry BUT this had to be done for the early access version as things are always changing and I am adding new content. They may reset again in the future as I change the way that the leaderboards are calculated. (ie; best single game and not most played. Its not fair if someone plays all day..... So I am working on that along side of the new leaderboards for the other locations. But look on the brightside if you are reading this early you can get that screen grab of you topping the charts and share it around the watercooler tomorrow at lunch break. Huh huh? Right? 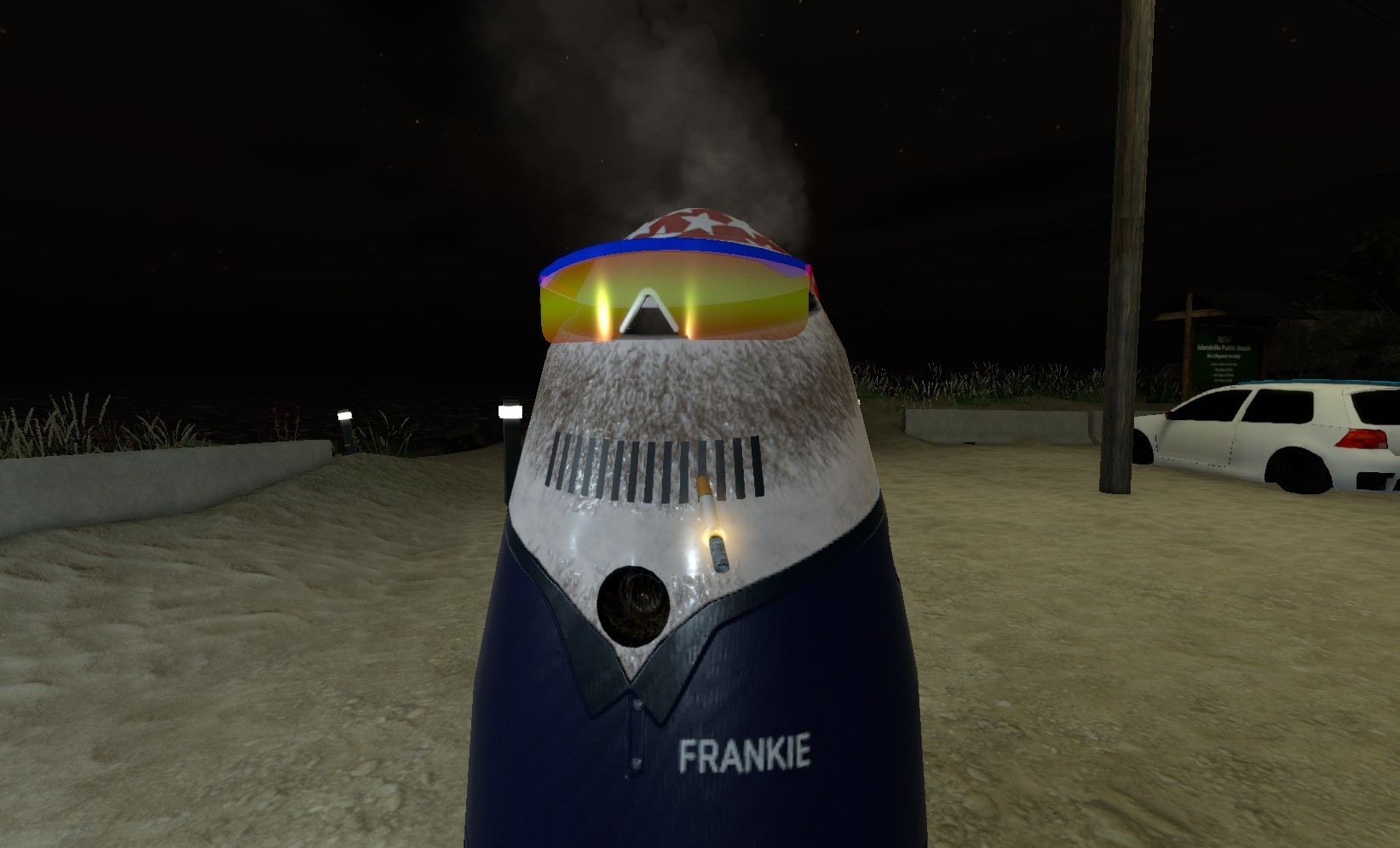 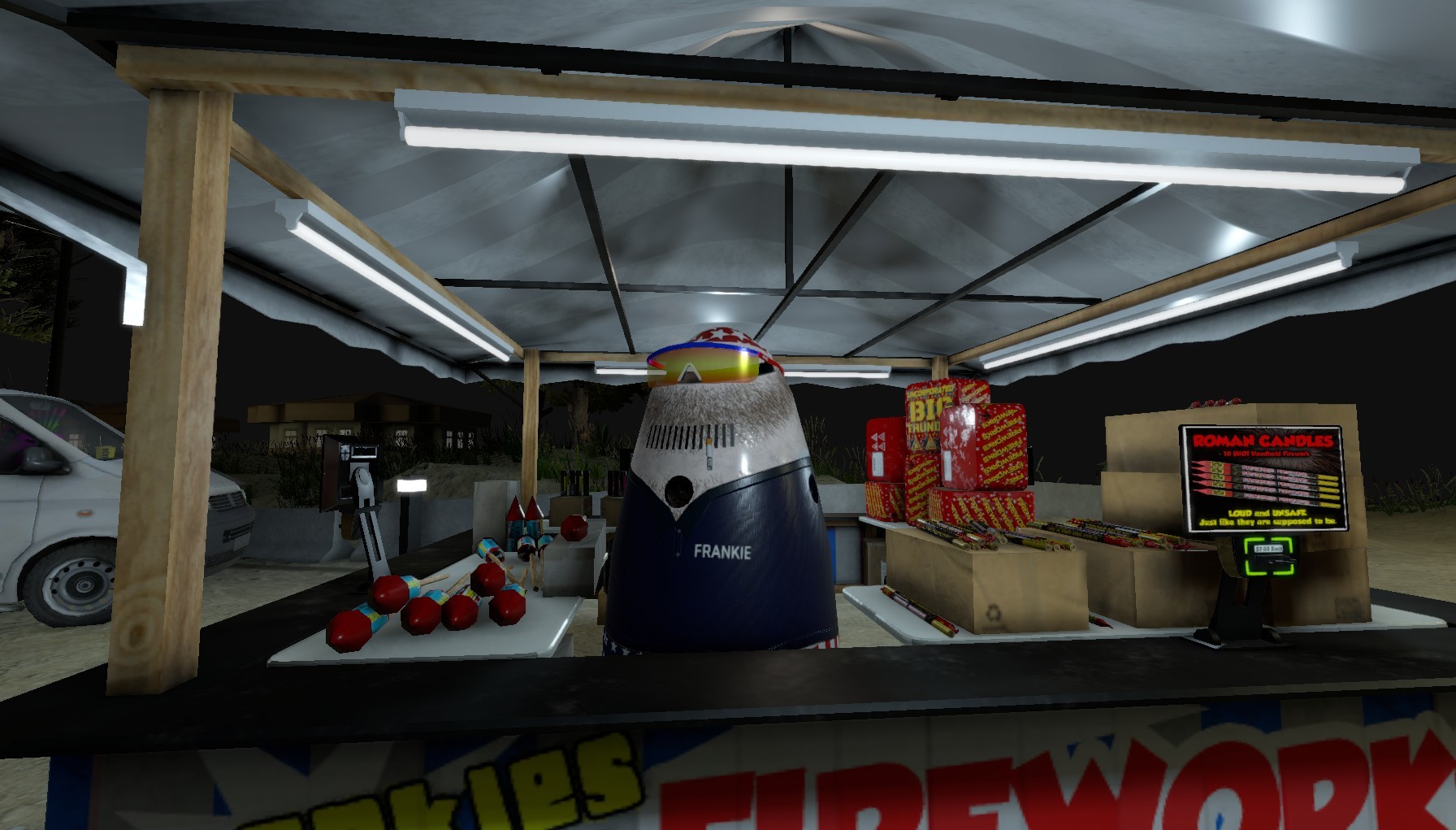 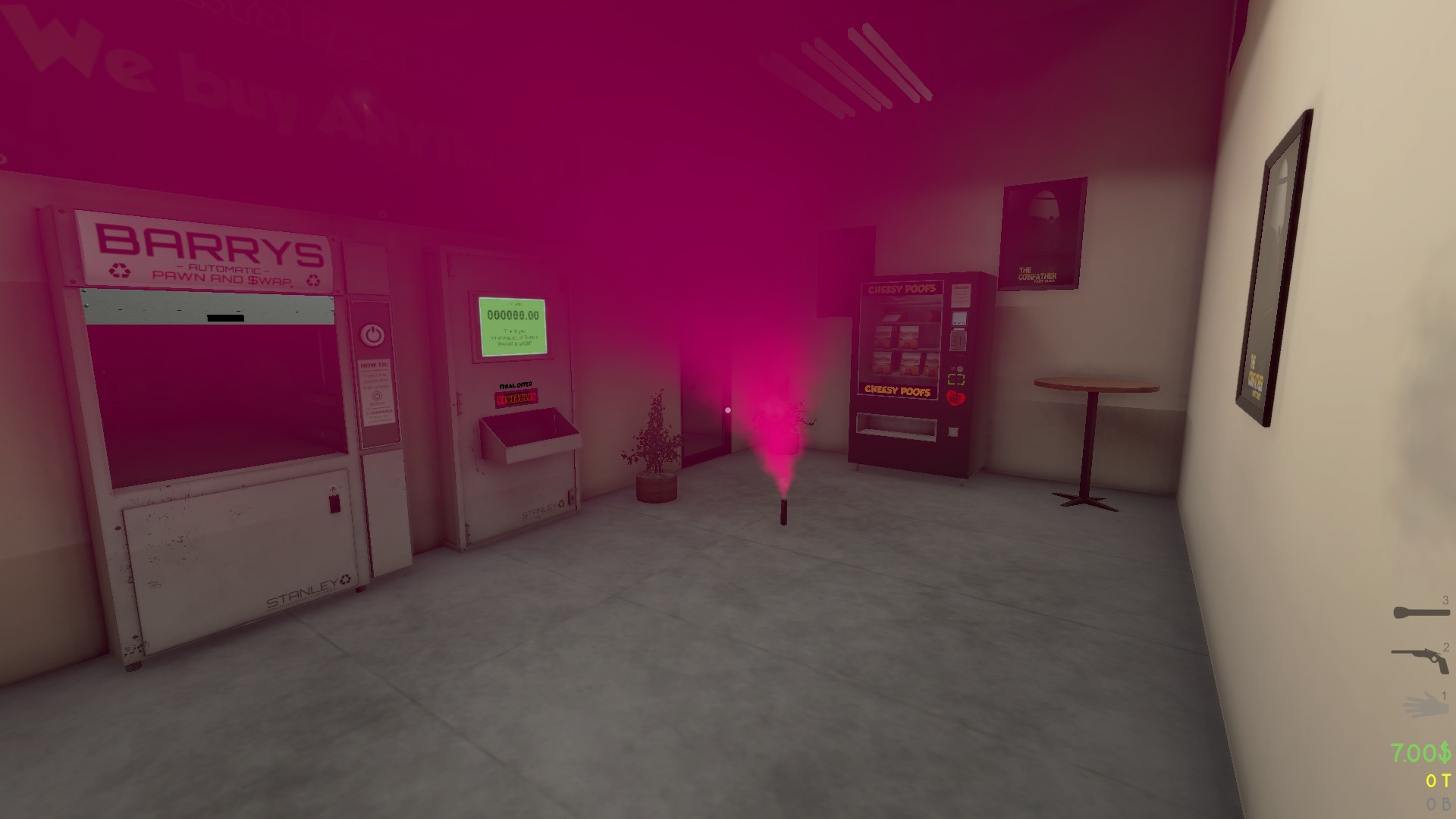 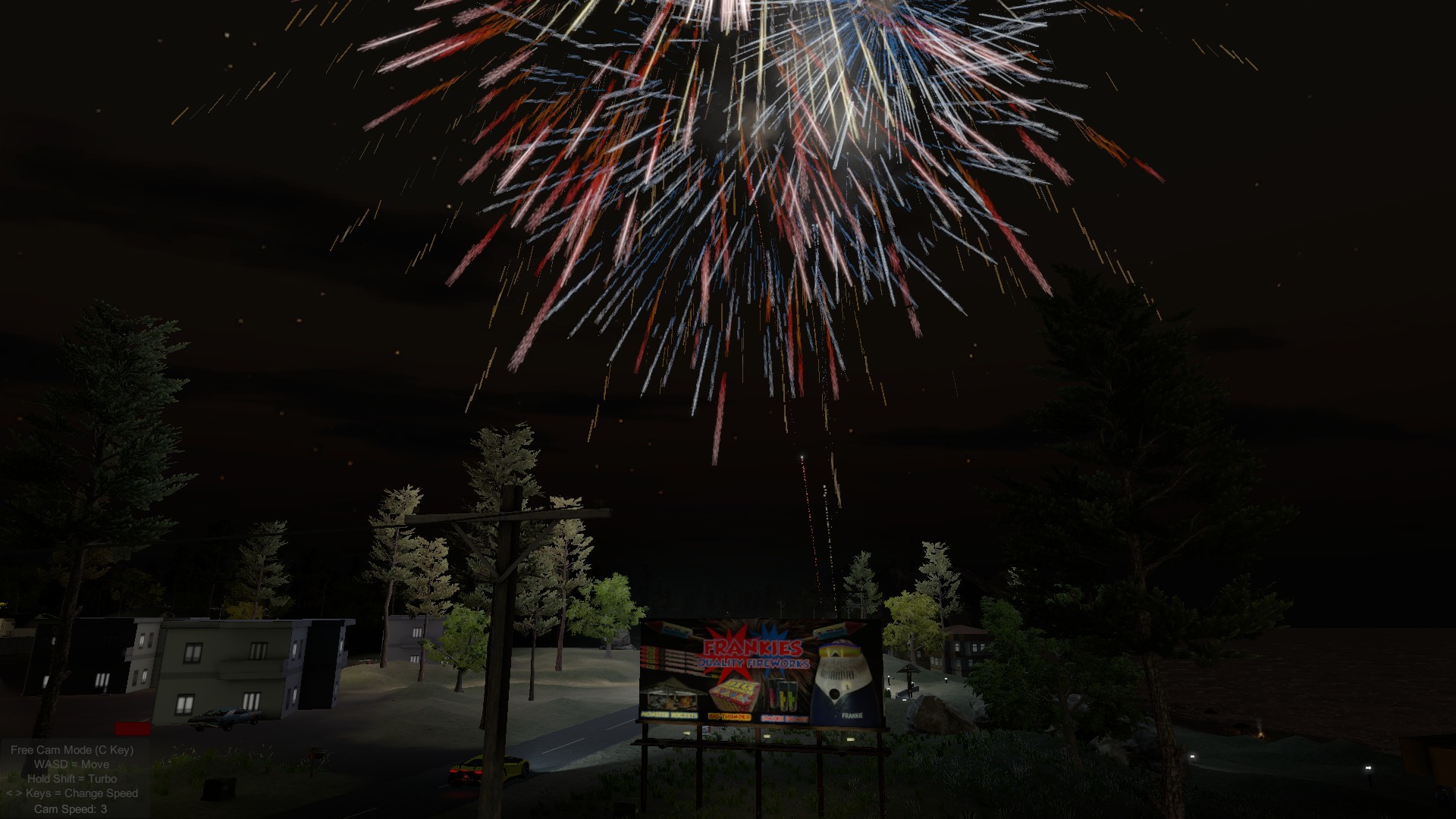 - Added a new fireworks stand at the beach across from the bus stop. Its run by a cool old dude named Frankie. He is an old vet that loves his pyrotechnics, Rhonda (His Lady Friend), baseball and freedom. He shows you all the "good stuff" without even having to ask and he never asks for an ID. Roman Candles, extra large bottle rockets, 16 shot mortar bricks and of course some of them new hip smoke bombs that are all the rage on the interwebs. So save up that money and put on a show for the locals. They will love you for it.

You light the fireworks with the right click button. After enjoying the splendor of the boom and bangs you can even get .50 cents for some of them at Barry's Pawn shop/recycler machine. The bottle rockets can be pretty hard to find after sending them into space though. lol. 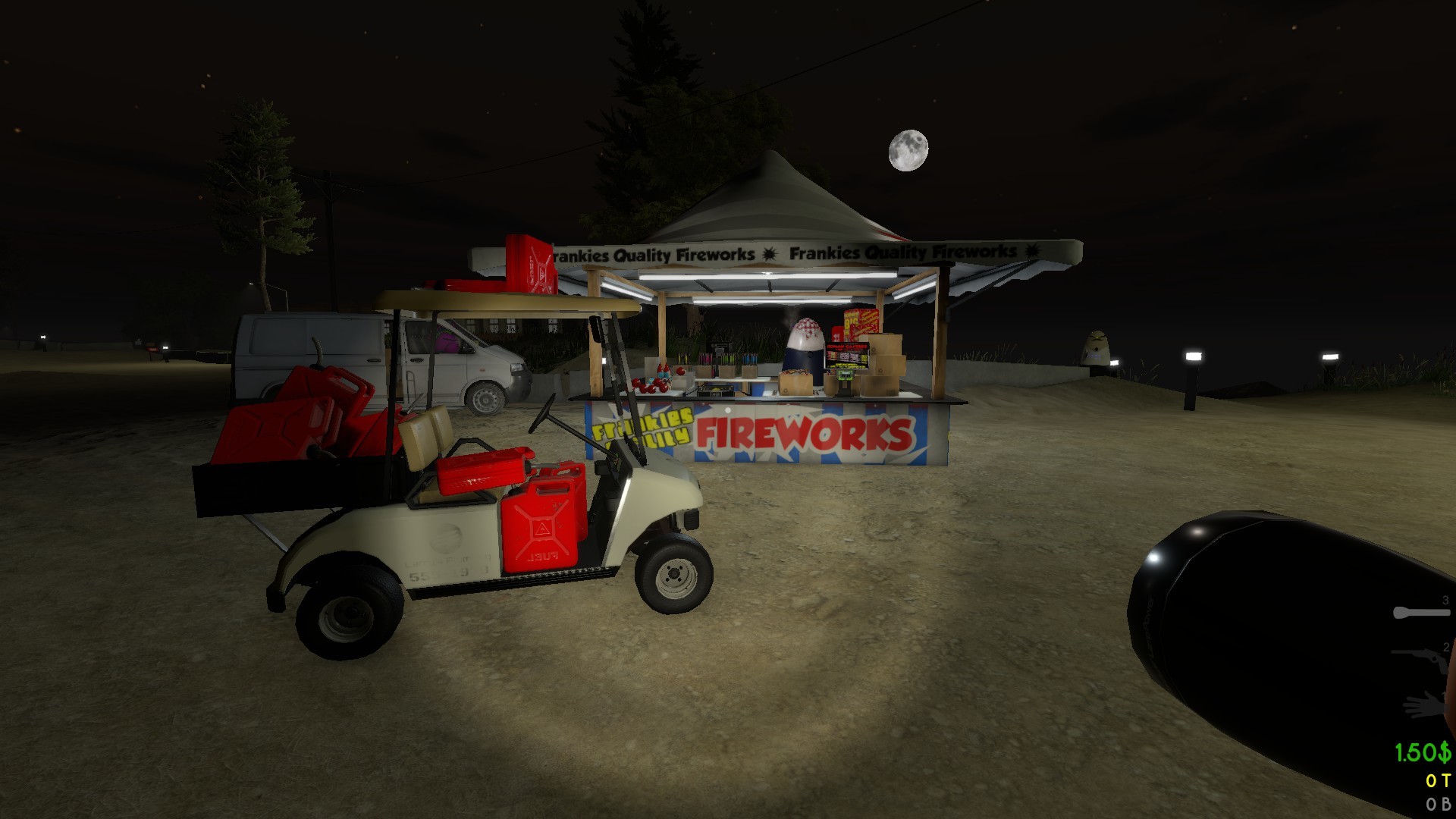 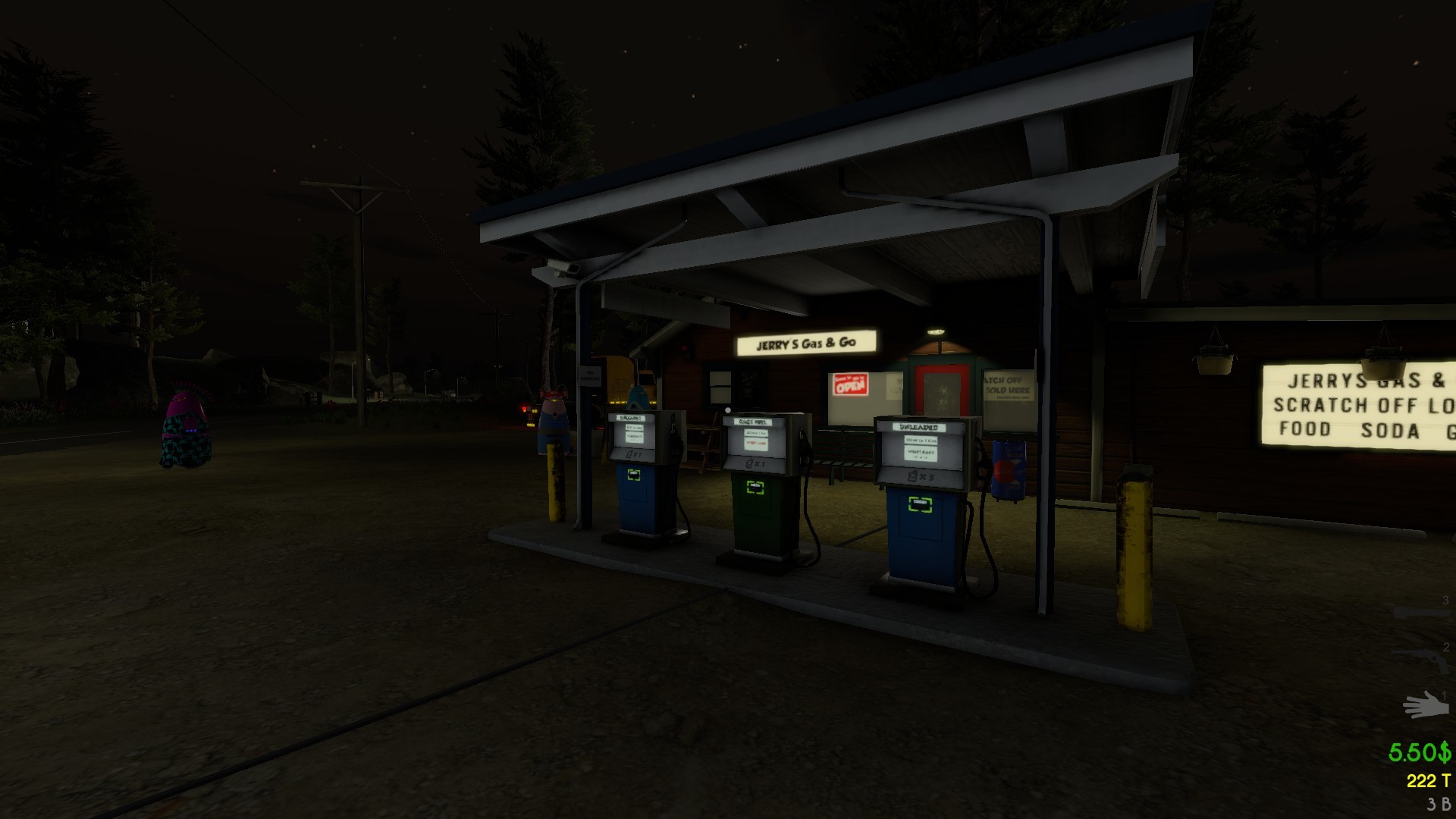 - Added a fuel burning system to the golf cart. You now have to buy fuel from Jerrys Gas and Go with your cash. You can purchase it in a single can or a 5 pack of cans from the pumps in front of Jerry's. Jerry's is still out of the RACE FUEL but I heard that stuff will make the golf cart sing. He said he doesn't know when it will be in stock again but he said it should be around the same time the Carnies come to town.

- To fill the golf cart with fuel you simply purchase a can from Jerry's (available in single or 5 packs) and then set it next to the driver side of the cart. You can see the gas cap on the side with the steering wheel. Once you have the can in position, right click on the can and it will autofill into the cart. The cart fuel tank holds about 5-6 cans(Approx 6.5 Gallons). Currently the carburetor on the golf cart is pretty clogged and its getting REALLY bad gas mileage. Later in the future Jerry should be able to help you get a little more oouummmfff outta of her. But for now he is really busy working on the vintage trucks from the carnie thats coming into town soon.

- I added a new ICON cursor system that will be the base framework for the ability to "use" items in the future. For now you can only "Use" the gas/fuel can when refueling the Golf cart. But in the future this will be how you will interact with "tools"and "objects" to perform more tasks and jobs to earn money. Earning loot the old fashioned way will be a big part of the coming survivor mode. It's not all fun and games when Uncle Phil's not greasing the pockets of ol'Islandville. Your going to have to get those hands dirty working odd jobs to earn your keep if you want to enjoy all the fun things the island has to offer. 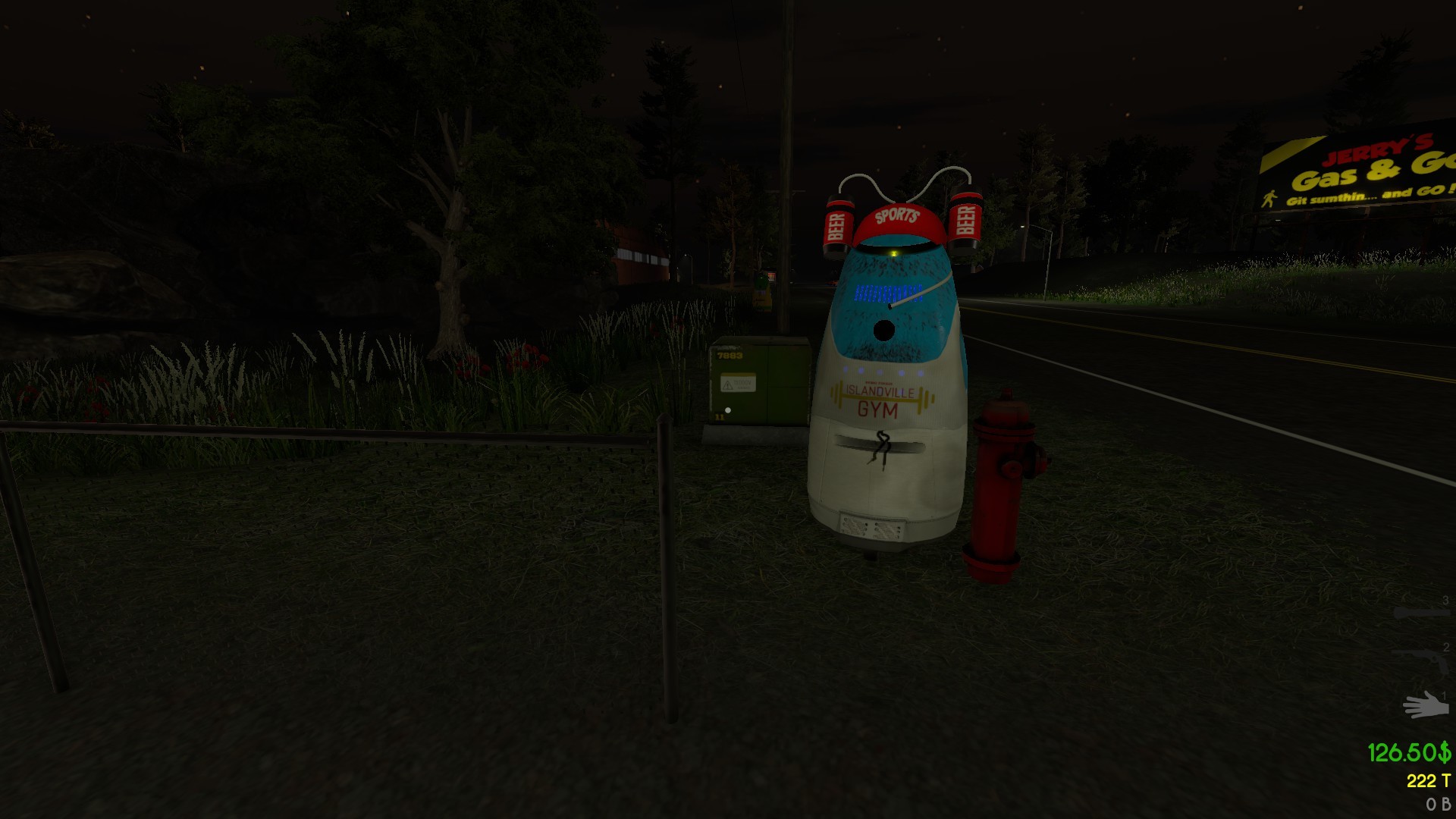 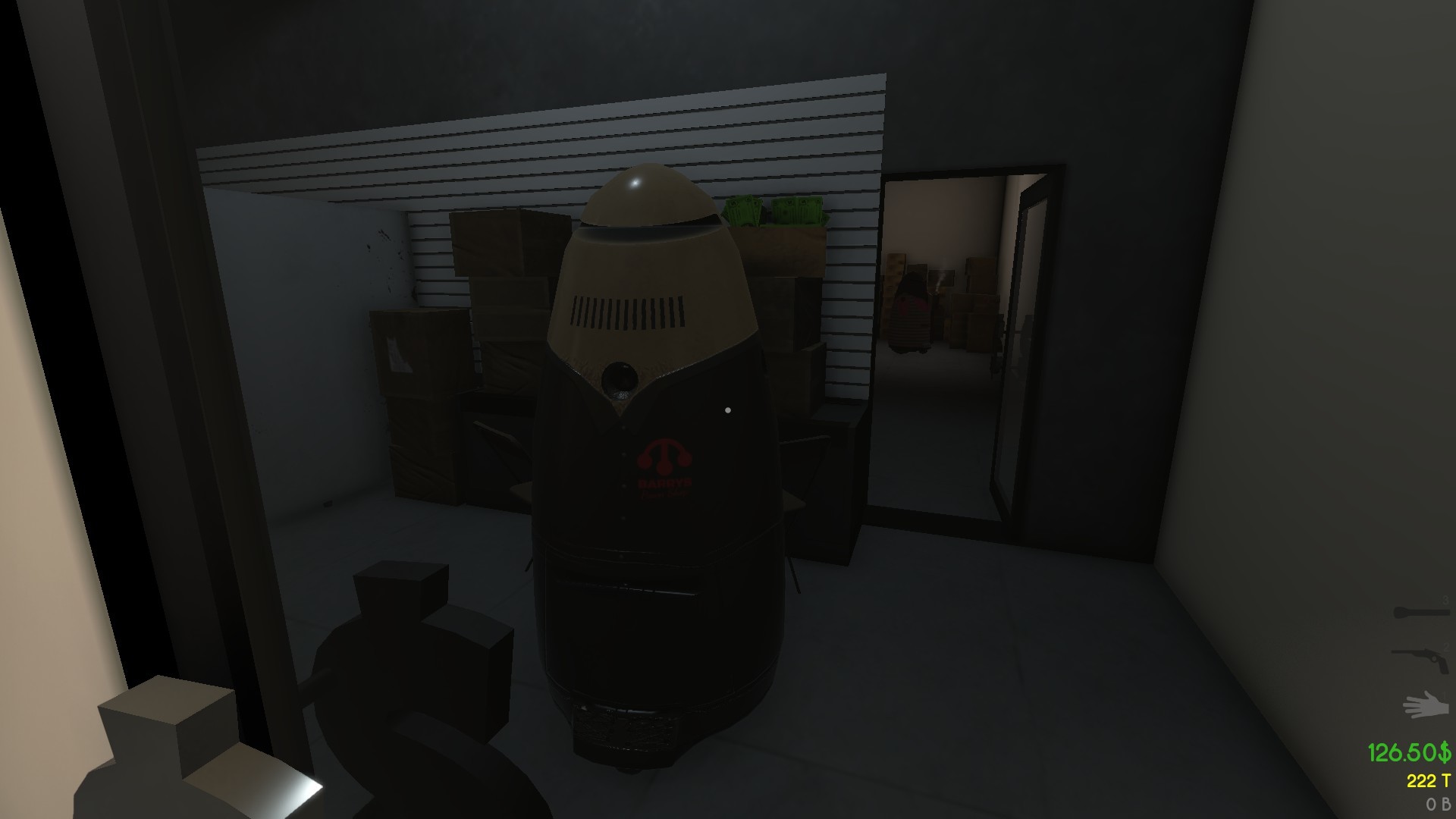 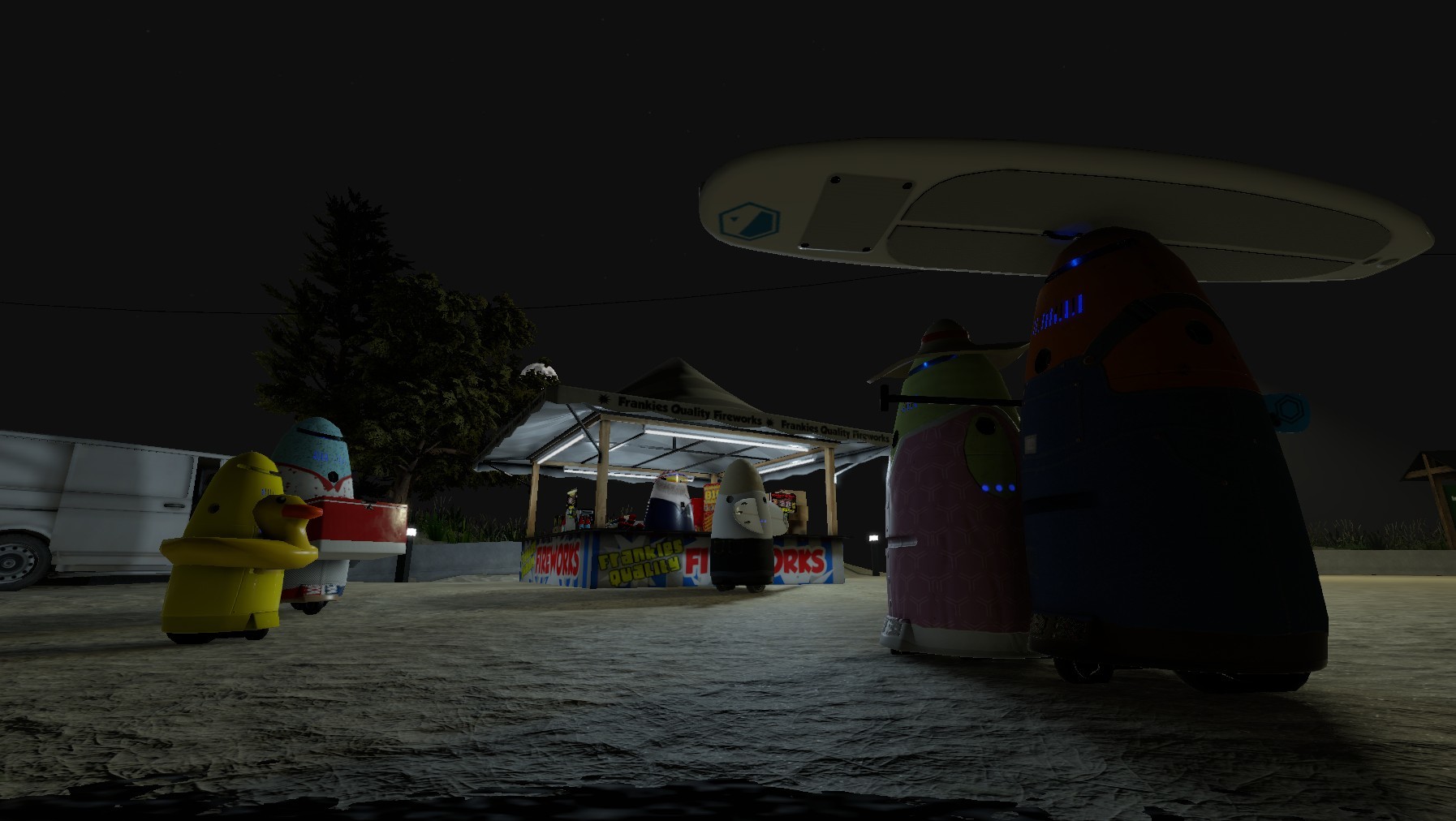 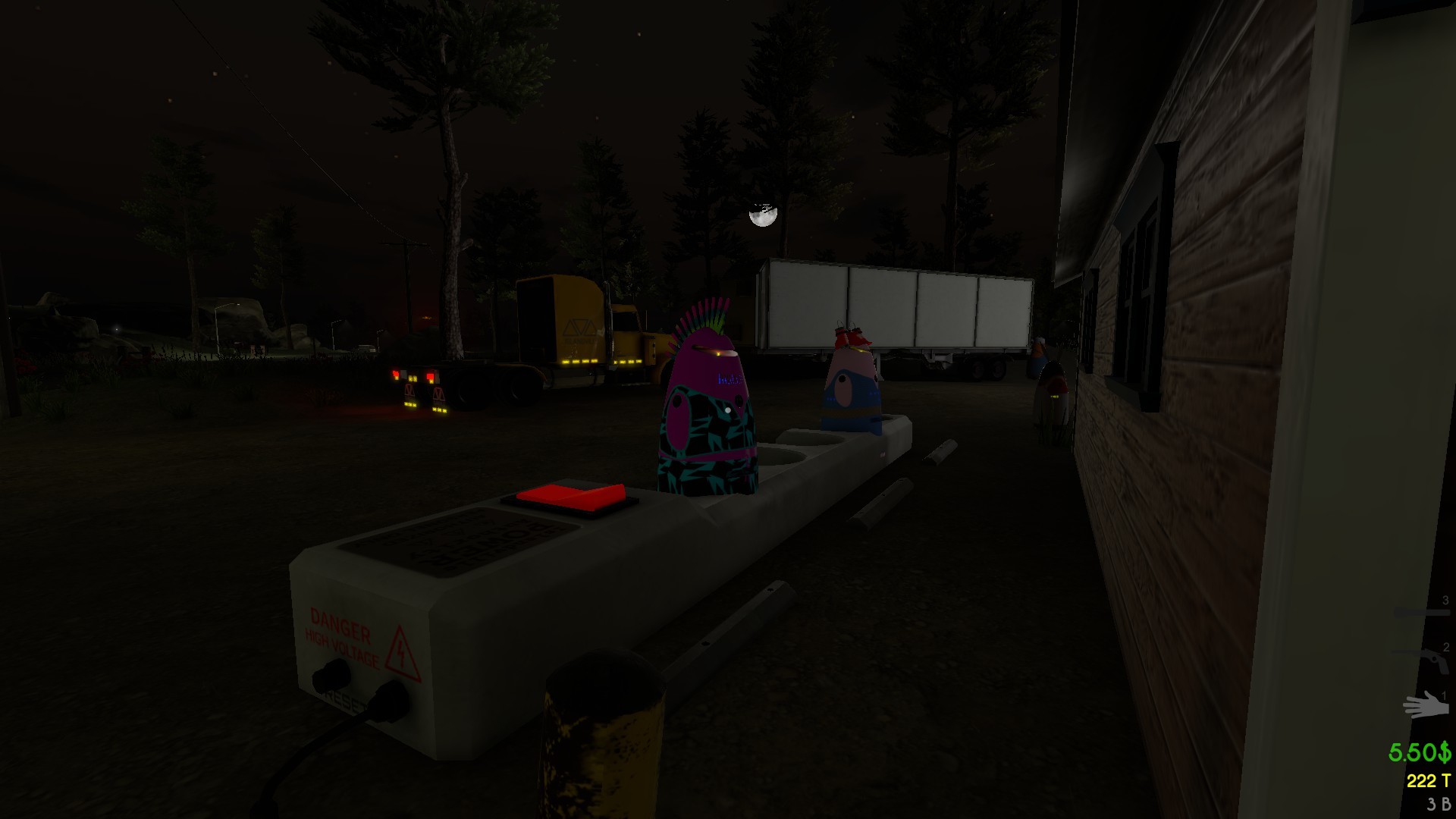 - Added a bunch of NPC bots to the main areas of town and a couple other random areas throughout the island. The robots will get more and more interactive as EA development goes on. For now they are just cruising around doing some errands and testing their navigation systems.

- Added some bots to the bus to give it a little life when you are riding around town. In the future I might want to make them get on and off the bus and transport around town.... But for now the bots will remain in there main "areas".

- Added a bus Driver and made the front doors not open anymore as you cannot board the bus from there anyway. The front doors will be how the bots get on and off in the future. Prob should have made that a little more clear. lol. 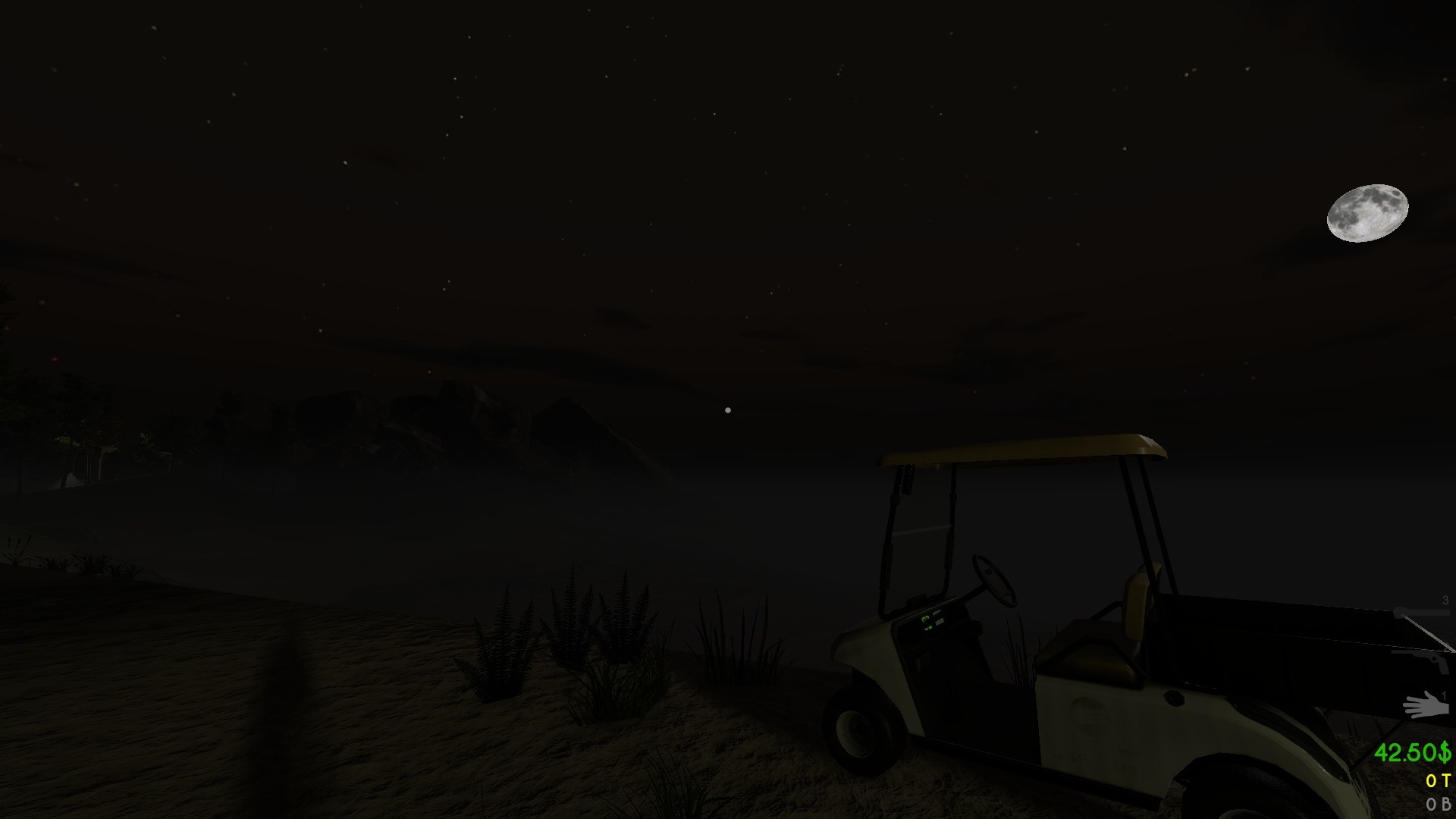 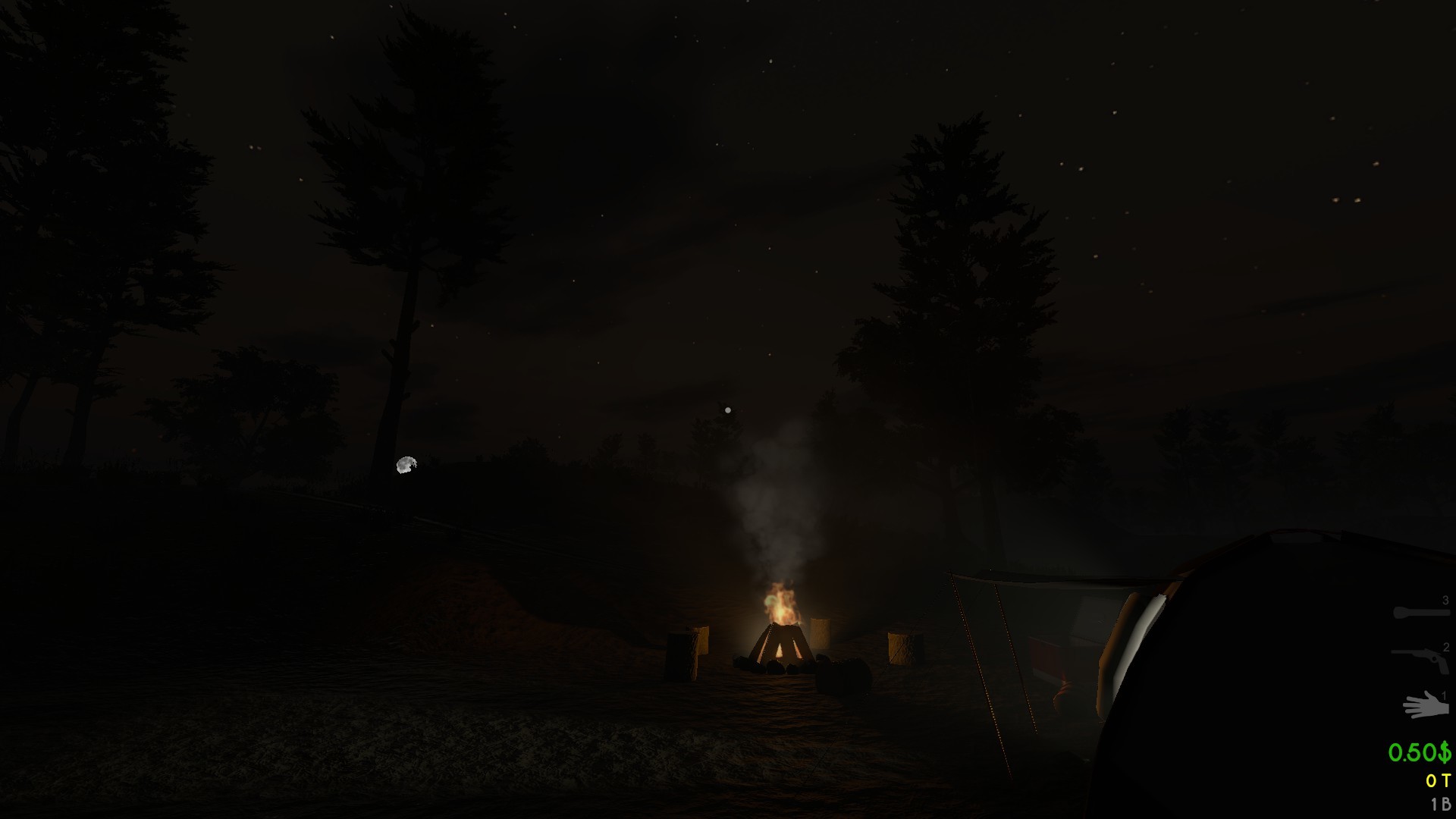 - Added some volumetric lighting to a bunch of the lights around the island. Mainly the flashlight, headlights on the cars and the Streetlights. As a kid I had to be home when the streetlights came on... So I spent a LOT of time staring at them. haha. Still adjusting these suckers. They can be pretty picky and will look overblown in some areas and not others. Again, Still tuning em.

- Changed a bunch of optimization and lighting settings for the outside world and gained quite a few frames per second. About another 10-15% increase all around. Also gained some frames inside all the buildings.

- Loading time should be a bit quicker as I am loading the audio a new way to help. This should help on some of the smaller GPUs.

- Added a new full moon with a "night light" sky for all the scaredy cats out there. It will give the open areas a little bit more light to see what you are doing but still remain a little spooky for the wooded and non lit areas. I also spiced up the campfires and tents with a little flicking realistic glow, volumetric lighting and some shadows.

- Added new simple water visuals to all the water surfaces with reflections and some blur effects for "underwater" cameras. I do not plan on adding any water physics (buoyancy) to any objects for now. you can just walk into the water for now and hold your breath for unlimited time... but don't get too used to that. ;)

- Teddy spruced up the stage show a little bit in the VIP Birthday area with some smoke machines and lasers plus a couple old folks reading the paper. The band has been doing well so they blew some coin on some stage equipment. Barry gave him a sweet deal on it.

- Audio Options menu will now update right away as it was not setting the audio from the previous round settings. Your settings should carry over from game to game now. Feel free to tune those peskie idiots out now. Very sorry for the confusion.


KNOWN ISSUES:
- Sometimes you can get stuck on the bus while exiting. Click the exit button twice as a workaround.
- MEGA Drop is still not completely redone. Will scam you out of some tickets every now and then from a timing issue.
_ You can still mess up the game by grabbing things out of the golf cart with the inventory button. For now try to make it a habit of removing them from the cart first and then putting them into your inventory.

That's about all for this update..... Now I am full steam ahead on the Carnival and the beta survivor mode. Stay tuned.


Thanks again for supporting The Coin Game. I can not thank you all enough for helping me create this game. I am very honored and excited to have this opportunity to build this adventure with all of you.

Let me know what you think in the comments below and as always.... feel free to share!