Update time once again. Find out what got done and what did not inside!

Hey everyone, it is update time once again. The last couple months have been crazy for me in terms of time but a good deal of stuff still did get done. Other stuff did not, but I will get to that in a bit.

I have not had much free time over the last five weeks due to stuff at work and other contracts I have for web and application development. I did get some stuff done on the game, though not as much as I would have liked and in some cases I could not find the time to get any work in at all.

So let's start off with what I got done for coding over the last two months:

A lot of coding has been done though none of the changes were "visible" changes, or changes that effect the way the game runs or how you interact with it. In order words nothing new has been added and no work on the modding system was completed. Those two areas are the only ones that have any real impact on the game right now.

Instead all of the coding has been focused on dealing with some required updates that I decided needed to happen now. These updates are to how ships are processed in-game. Before these updates ships were a self-contained unit, they had no "parts" that could be switched out to affect their attributes. Well that is changing right now.

Instead of the old way ships are now going to be completely modular even down to the armor plating and hull. There are a lot of things that have to be changed because of this and I wanted to do these now while there would only have to be changes to 50% to 75% of the code directly/indirectly related to ships (which represents about 18% of all of the code for the game) than later where that number could be closer to 22% to 30%. Every system on the ship will be modular, here is the current list and I am adding more as I think about the systems:

These changes will also bring ship power into the picture. It will be interesting to incorporate it into the game but it will be done in this version. Essentially there is only one power system that has to be dealt with in terms of battle, the secondary power system. The primary system is there only as a requirements restriction, meaning if you do not have enough power left in the primary system to install a primary system component then you cannot install that particular component.

The secondary system is something different altogether as I prefaced in my last update. It will handle weapons, active/mid-slot & high-slot passive modules, and shield recharging. How fast the secondary power system, or capacitor, can recharge will depend on the attributes of the primary power system. The capacitor will have its own power storage capacity attribute though.

I will have more on how this could effect battle some other time, probably in a video which is a topic we will get into later on.

So these components can be switched out in any ship to enhance the factory default statistics and make your ships much more powerful because of that. For example it may be possible to equip destroyer weapons on a frigate using aftermarket parts.

Most of these changes center around three areas: the ship class, which has had to undergo extensive modification because of these additions, the database/data system classes where the ship data is being stored in the save database and also in getting the attributes for ships in addition to the new items types and getting the data for those, and finally in the classes for the new ship components themselves.

All in all there is about 294 hours of work done in this last two-month development cycle for coding. I have been focusing on this exclusively on the coding side so nothing else in the works has progressed for the game nor the modding tool.

Now, due to my schedule I was not able to do any work on infographics or audio. There will not even be a developer's vlog for this update as most of the work I did was done while I was off-project at work. However what I do have for you is our first video out of a series of videos that will be information/discussion intensive on the game itself and my ideas for the game play and story.

This first video will be the introductory video I have talked about before. It is just under 40 minutes long and goes into the current state of the game, the game's history, a bit about the game play, and also talking about how the YouTube channel for the game is going to be used.

I will be putting out at least 15 videos in total for this video series, maybe more depending on how detailed I decide to go now that total run-time is not a factor. Before I could not go into much detail as I wanted to because the video, when done as a whole, was going to be nine hours long. Now that I am breaking them down into smaller series on specific topics I can be as detailed as I want to.

There will also be a second series that will kind of play off as an interactive encyclopedia for the lore of the game which I will be making extremely extensive; Dawn of War 40K universe lore type of expansive.

Here is the video referenced above:

In addition to all of that I am in the middle of remaking the website. Here is a little peek at what it will probably look like when it is completed though some of the design elements may change: 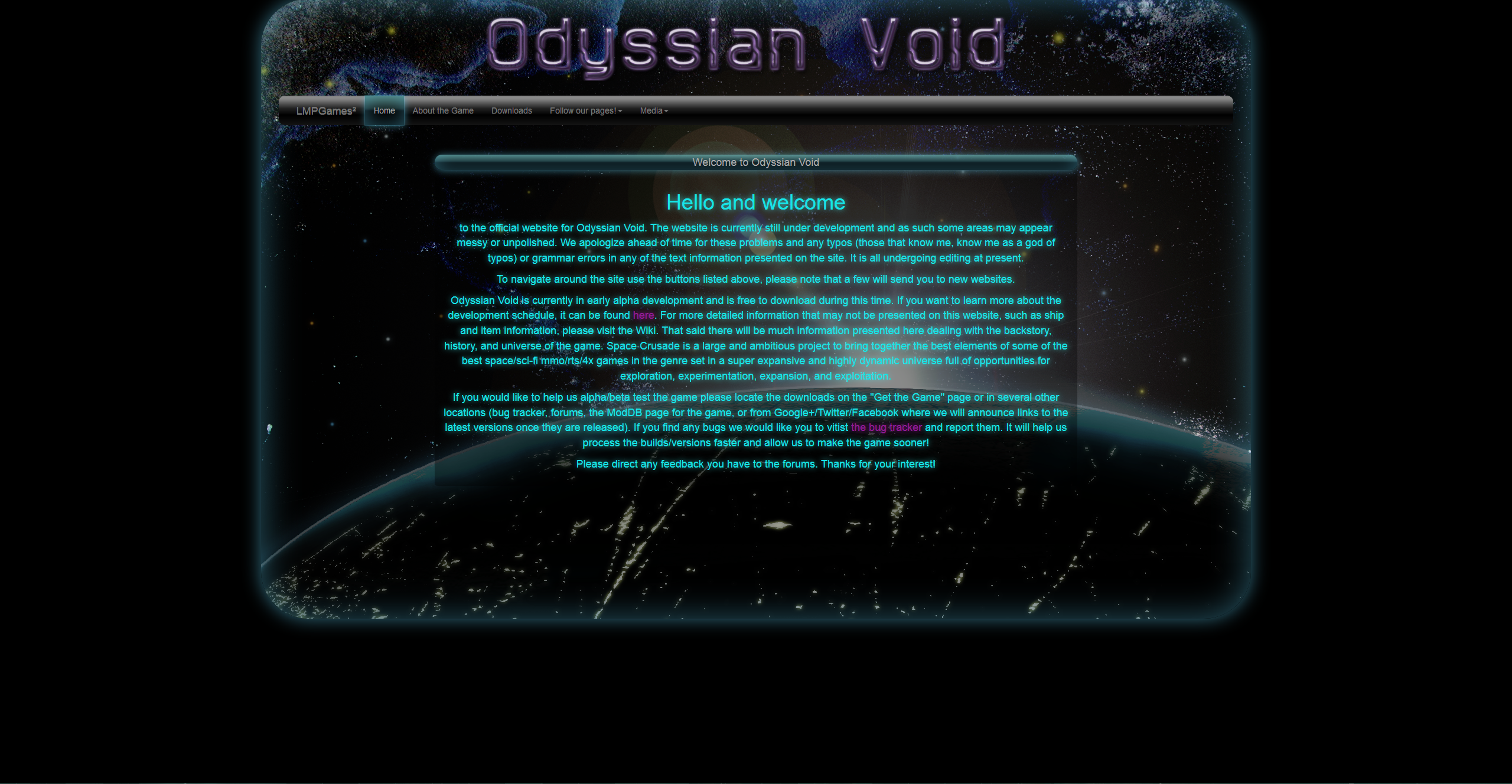 That is all I have for this update. I am hoping to get some more time so I can do some work everywhere instead of just in specific areas over the next two months but I will have to see what happens. Be on the look out for more videos on the channel as I will be releasing them sporadically between updates to break up the monotony in-between.

Thanks for your interest in and following the project!