G’day and welcome to a jam-packed January Update for 8-Bit Adventures 2! This time around, we're going to look at the World Map, show off some 'Cinematic Shots' from the game's cutscenes, cover some general updates, and more...

G’day and welcome to a jam-packed January Update for 8-Bit Adventures 2! This time around, we're going to look at the World Map, show off some 'Cinematic Shots' from the game's cutscenes, cover some general updates, and more...This week Steam is celebrating Australia Day in the best way possible – with big discounts on great, Aussie-made games! So come on in; I'll put a shrimp on the barbie for ya* ;)

*Fun Fact: Australian people don't actually use this phrase (except when advertising internationally); at least, no one I've ever met does XD

As anyone who follows @CriticalGamesAU on Twitter or Facebook might know, my 2019 started off with a very exciting package. These are the physical boxes and manuals we’ve made for use in promotional activities (like a competition where YOU can win one!), and I couldn’t be happier with how they’ve turned out =D 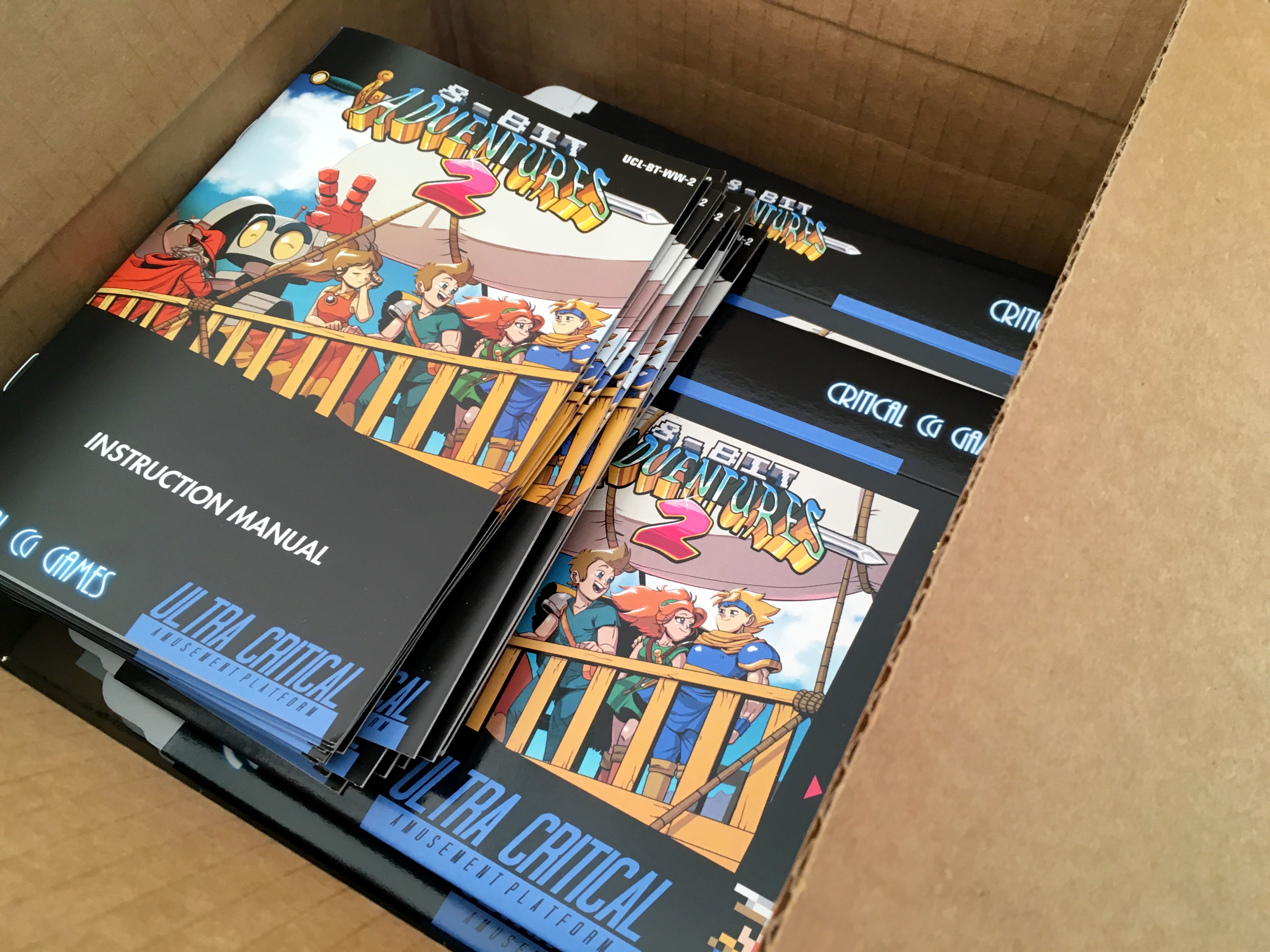 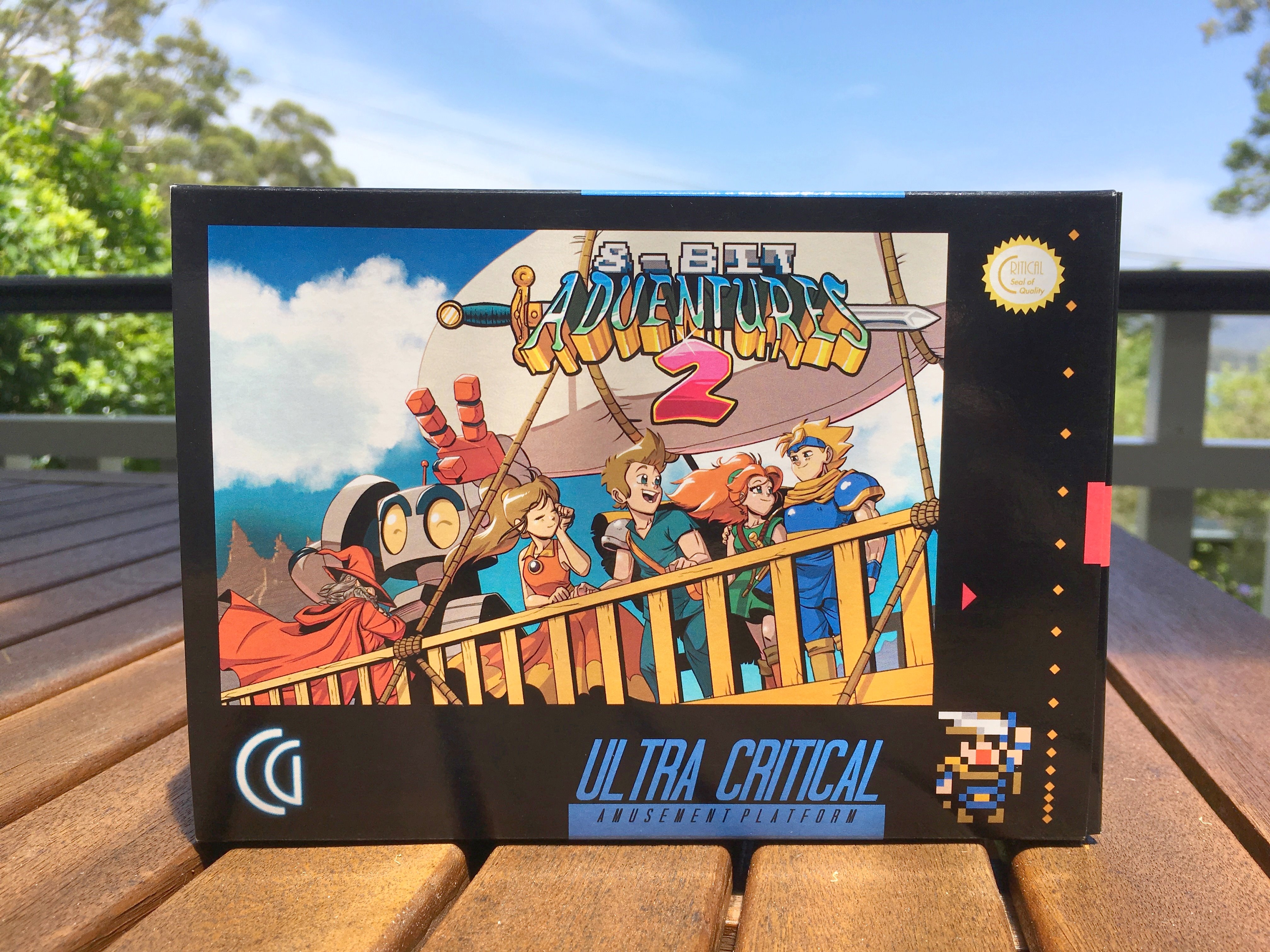 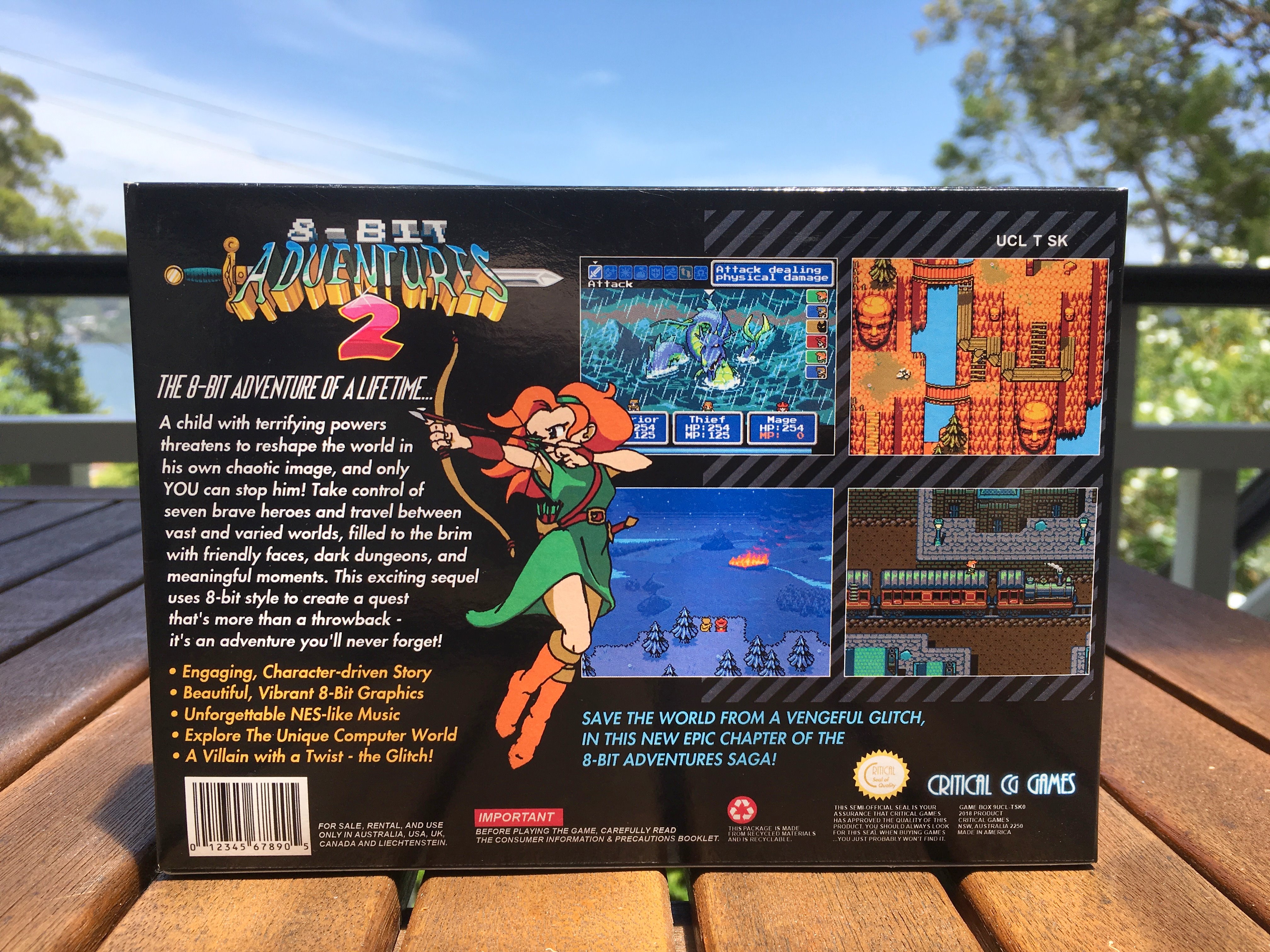 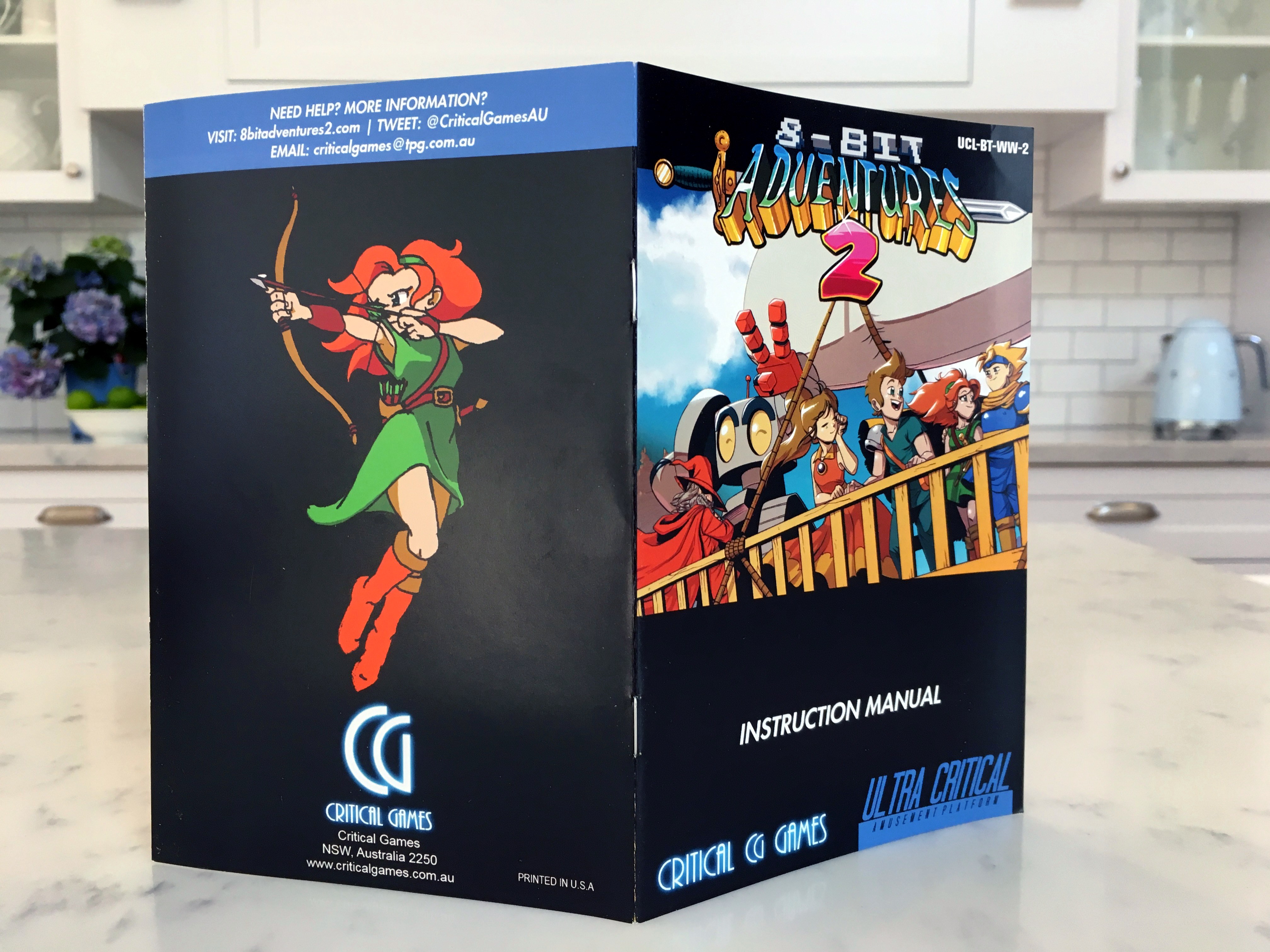 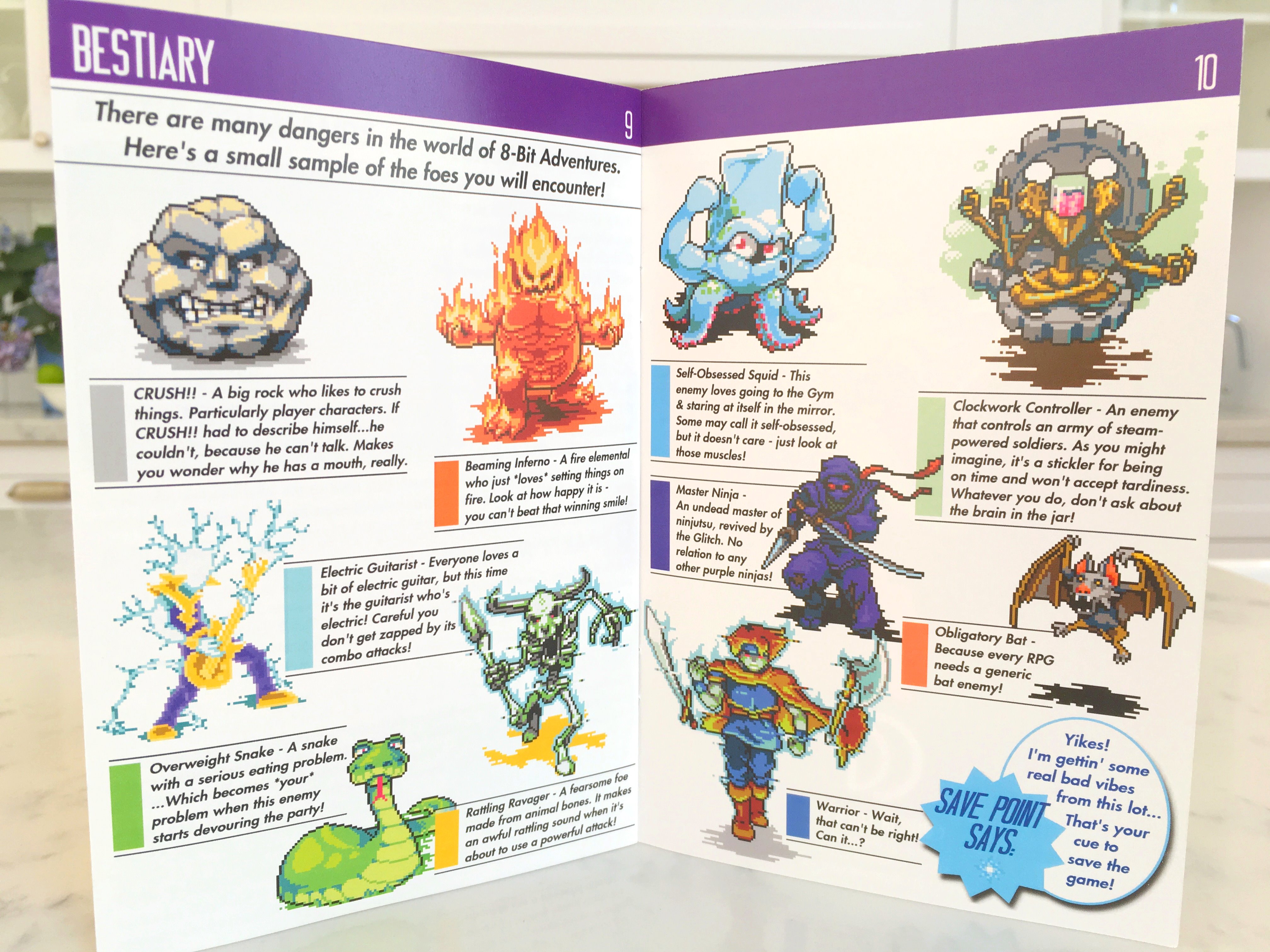 Of course, this was only possible due to the efforts of several people! The beautiful cover art was designed by Ryan Jampole, all of the other artwork was created by our wonderful artist Jerram Fahey, the layout was designed by me, and the amazing print job was done by Uncle Tusk.

Tusk’s help was instrumental in making this happen, so if you’re interested in filling some blanks in your collection, please check out his store: www.uncletusk.com
Uncle Tusk specialises in games that were either never released, never translated into English, or are the best-of-the-best fan hacks. He can even do custom orders!

Well, not literally. But I wanted to take some time in this update to show you guys the main World Map from 8-Bit Adventures 2, and compare it to that of the first game. Right click and choose 'View Image' to see the full size (but please note that not everything is 100% on the 8-Bit Adventures 2 map)! 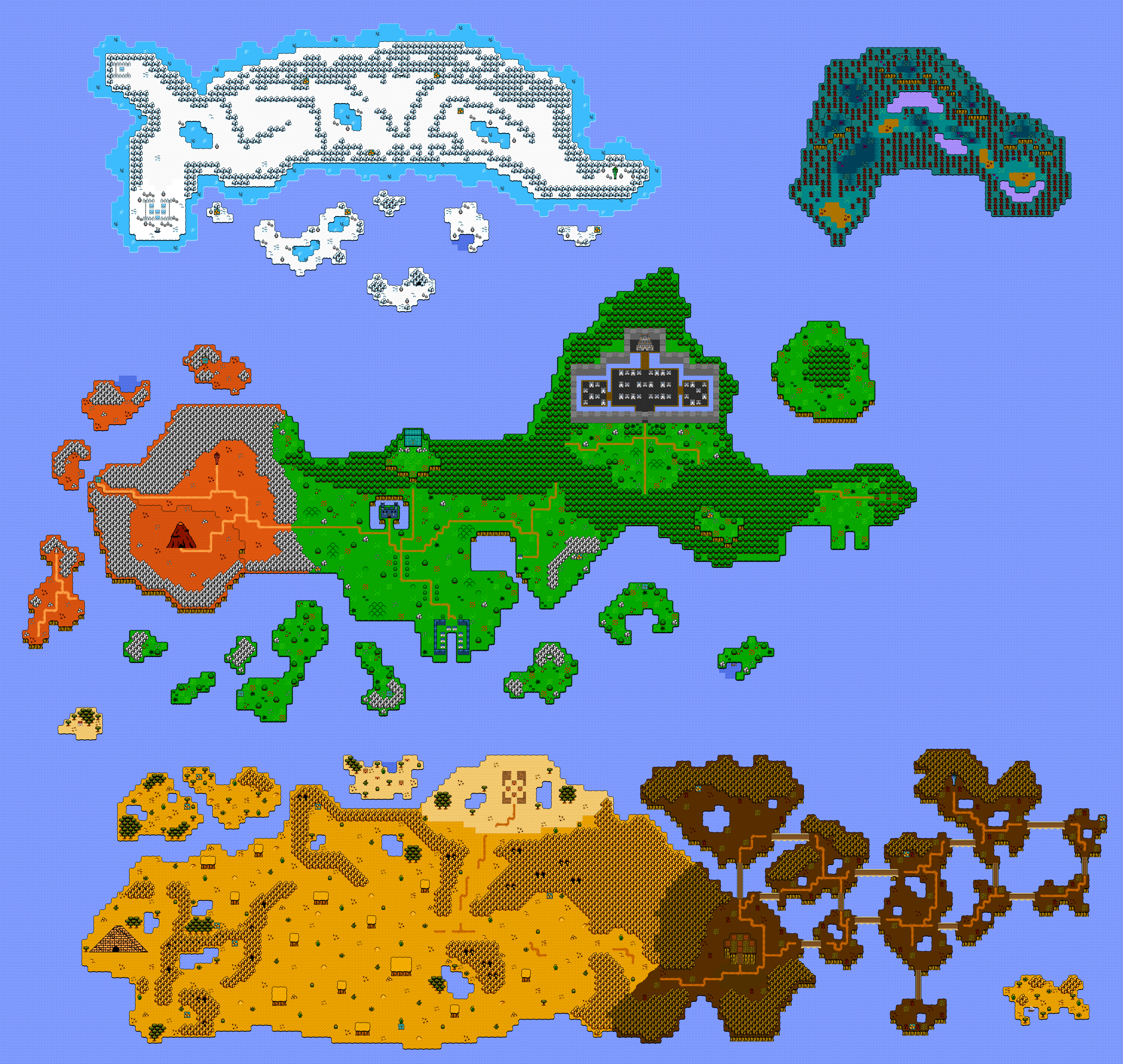 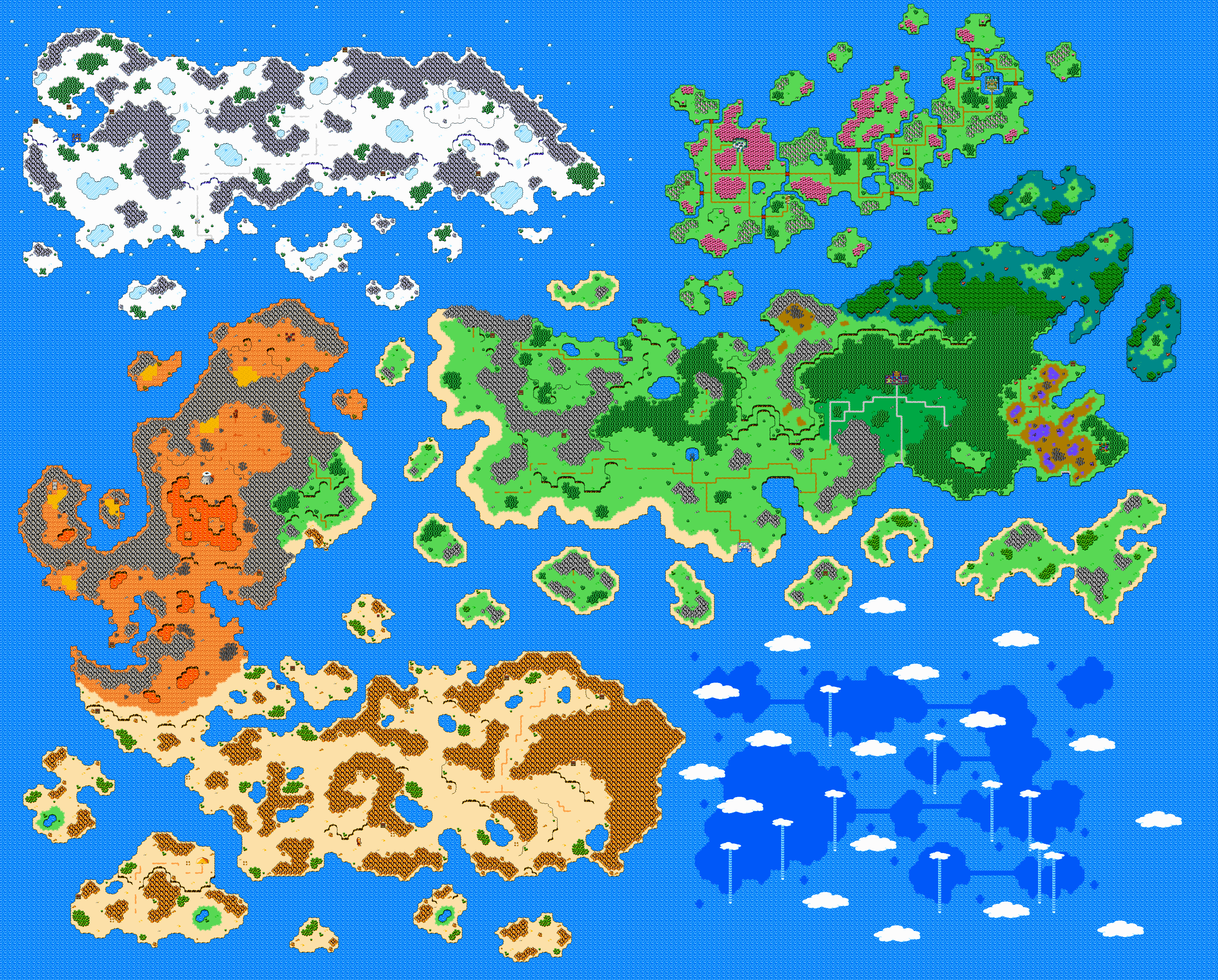 As you can see, the continents are in the same general locations and every city/dungeon that should be accessible still is. But the world is now dramatically larger; both in terms of scale and landmass. There’s much more optional exploration to be done in 8-Bit Adventures 2's World Map, and many new locations to visit. There are even a couple of other World Map-style areas that branch off from this one (such as the Floating Continent)!

Of course, players of 8-Bit Adventures 1 might be wondering exactly *why* the world looks so different now. Well, that’s due to the Dust. As stated in the first game, it consumed massive parts of the world; even whole cities! That’s what the ‘World of Dust’ at the end of that game represented. So, in the meantime, the Computer had to cobble together the remaining pieces of the world into a cohesive whole. That was the world you explored in 8-Bit 1.

However, since you defeated the Dust, the world was restored to its true form, and every missing city, island, and continent was returned to its rightful place. As such, 8-Bit Adventures 2’s World Map represents the ‘true’ form of the world – and there’s a *lot* to do in it!

The graphical asset list is getting pretty short now, and one of the recent things that Jerram has been working on is what I call ‘Cinematic Shots’. These are letter-boxed, Ninja Gaiden-esque pieces of artwork, sprinkled throughout the game and used to enhance specific cutscenes and events.

I’ve already shown parts of the opening cutscene in the past, but I wanted to showcase a few more of these shots today (because I’m really happy with how they’ve turned out!). The tricky part is that most of them contain big spoilers for the game, which really limits exactly what I can show. But I hope this will at least convey the idea of our approach. 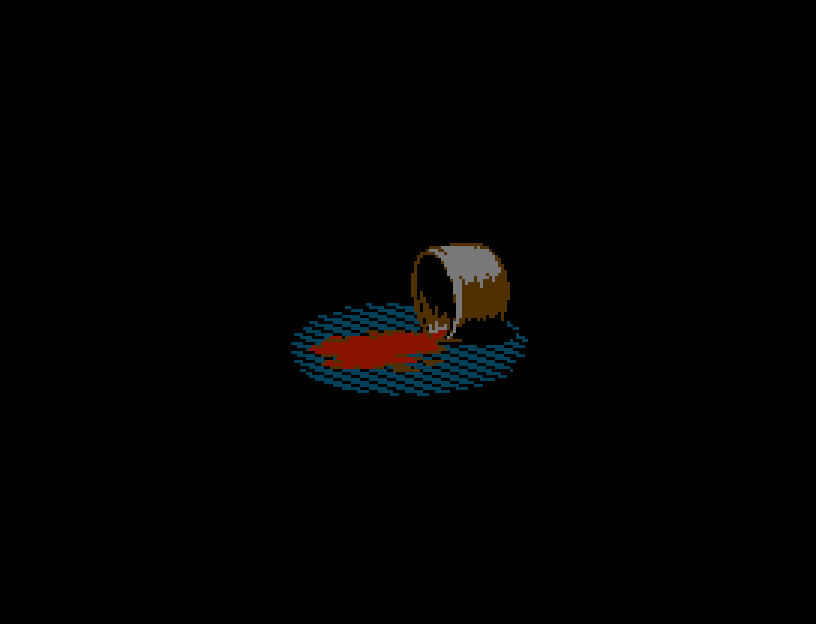 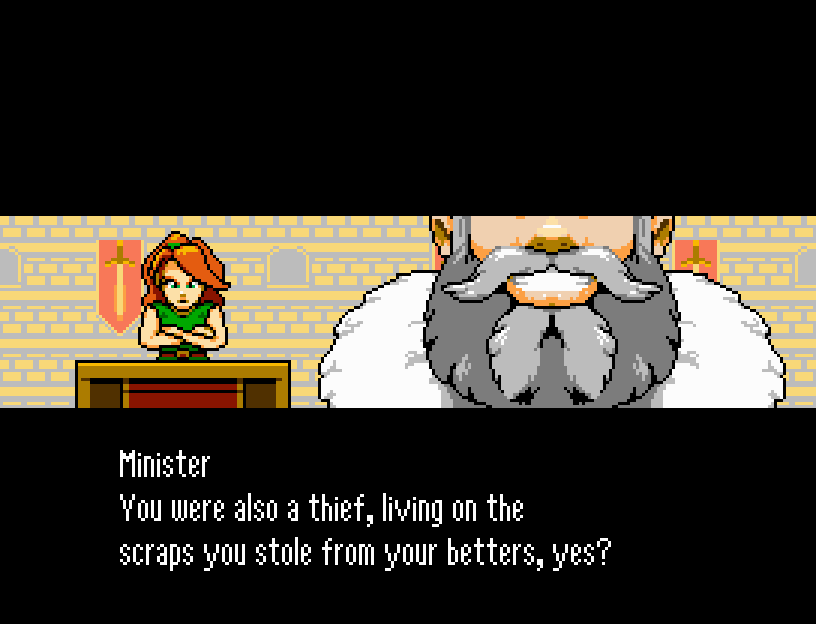 I didn’t want to end this month’s update without touching on the release date! I’m sure a lot of you are wondering if this game’s ever coming out, and while I’d love to tell you exactly when it is, I’m still going to hold off a bit longer.

Once I’ve played the game straight through, from start to finish, for the first time, I’ll announce the final release date. Now, that may just sound like I’m saying “Once the game’s done, I’ll release it”, which, uh…wouldn’t be the most surprising announcement =P But just because I can play the game straight through, doesn’t mean hat it’s finished. It *does*, however, mean that I’m very, very close, and the remaining jobs are much more quantifiable than what’s come before.

It’s a funny aspect of game development, but even after working on something every day for several years, you don’t truly know how your game has turned out until you’ve played it from front to back – like a normal player would. That's not to say that developers have no idea how things are going, but there's a big difference between seeing the parts and playing the whole =)

So once I’ve done that, I’ll be able to provide a definitive date. This is the same approach I used for my two previous game releases, and this way, I won’t jump the gun like I have in the past for 8-Bit Adventures 2 =P

Rather than just telling you about what I’m *not* doing, though, let’s talk about what I have been doing these past couple of weeks. I’ve been working on a big (spoiler-heavy) narrative sequence near the end of the game, and I think it’s turned out really well. However, while testing, I found that the sequence needed more room to breath, so I’ve implemented a new, small dungeon area to improve the pacing. And it seems to have done the trick!

Aside from that, it’s been a lot of little jobs. Sufyan (the programmer) and I have made some tweaks to the battle system that I think will improve players’ experiences (one to do with preventing the HP Bars from cluttering up the interface, and another that adds a confirmation step when using attacks that target all enemies). You might not notice all of his work, but his code (and flexible approach to design) is one of the main reasons why battles are both fun and functional in 8-Bit Adventures 2!

Sebastian (the composer) also recently sent me tracks for the optional, endgame dungeons, so we’re very close to completing the soundtrack. He’s taken a very creative approach to the soundtrack as a whole, so I can’t wait for you to hear his work in the context of the game! If you missed it, please check out last month's update where I uploaded over 10 minutes of music samples from the game: Steamcommunity.com

I am also ecstatic to tell you that Jerram (the artist) and his wife have just had their first child last week – a healthy baby boy! If you’d like to send some congratulations, you can either leave a comment here or contact him through his DeviantArt: World-of-noel.deviantart.com

Jerram’s worked hard to keep us on track while he’s taking family time, so I’m very grateful for that!

In short, we’re all doing our best, and the light at the end of the tunnel is getting closer by the day. And I’ll have plenty more to talk about in next month’s update!

These discounts won't get any lower in the future, so get 'em while they're hot! ;)

And remember, every purchase goes towards 8-Bit Adventures 2's development. As many of you know, I am funding development myself, so any and all support is greatly appreciated! And of course, I'm not the only one with a sale on. Don't forget to snag some great games this weekend and help out my fellow Aussie indies!

Well, so far so good on my 'one update post per month' plan! When my last game (Tales Across Time) was coming out, I did daily updates on Twitter for a few weeks until its launch, so I’m still considering bringing that back. I can really dig into the minutiae of the game’s systems then!

And don't forget the newest addition - the Critical Games Creator Page: Store.steampowered.com
Follow that page or wishlist the game to be notified when 8-Bit Adventures 2 is finally released!

Thank you all so much for your continued support, and I hope you enjoyed this update. And wherever you are in the world, a very happy Australia Day to you! You might not be Australian, but just say g'day, call people 'mate', have a relaxing weekend, and that'll basically cover it =P

After nearly 13 years, Kingdom Hearts III is almost upon us and I'm slowly devolving into a ravenous 10 year old, hungry for more Goofy action! Shame I don't have much time to play it anymore... I mean, I guess I *could* stop working on 8-Bit Adventures 2, but my boss can be a real pain in the bum ;)