A small update concerning the progress of Islands. Got some fun stuff to show off today. Some fruits have been added, a new animal to encounter, and some fun aesthetic items.

I decided to toss up another news update for Islands because I've made a ton of progress since I posted the news article yesterday. Lots of things have been added, and the game is coming along really well. If I can keep up the pace, and work ethic from yesterday then you all can expect the alpha release for Islands to be sometime in the next couple of months.

The game will be free-to-play but I may release some content packs later on down the road after release. Nothing super crazy in terms of costs (probably $1.00), but I'd like to release a new environment every once and a while for people to play in instead of the same island chain all the time. If this plan does work out I may release something based in Northern Canada in the middle of winter. Dealing with snow, wolves, bears and more. But for now, the focus is Islands and the core game itself centered around the island chain.

If the island chain starts losing appeal for some I did mention the source files would be released eventually once the game is a little more beefy. This means players could make their own games using the Islands engine (using credit of course) but it is mainly going to be geared towards player created mods, and levels. For example: Let's say Timothy wanted to make a mod where players can ride on Jaguars, or some other large animal. He could make that happen. 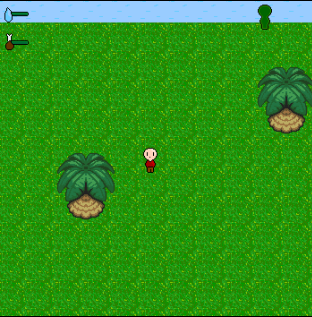 Work has begun on the first island of where players will touch down upon starting Islands. From the image above you can probably tell everything is in extremely early stages. The palm trees are place-holders, and I'm actually really pleased with the grass sprite. In the right corner you can see the "health bar" which displays the player's health and will deplete every time the player takes damage.

On the left you can see the thirst meter which is represented by the water droplet. The thirst meter will deplete every so often and you can restore some of it by drinking fluids. Ocean water cannot be drank, but river/stream water can but may need to be boiled first to kill off the bacteria. Cracking open coconuts can also yield something to quench your thirst. There will be more options to quench your thirst in the game, yet no word on if I'll be adding the ability to drink your own piss (lame attempt at sticking in a Bear Grylls joke).

Below the thirst meter you'll see the hunger meter which is represented by a chicken leg. Pretty self explanatory as it slowly depletes over time just like thirst. It can be restored by eating cooked foods, fruits, vegetables, etc. I'm trying to decide if when playing multiplayer and a friend dies if you can resort to cannibalism. I'll keep you all updated, or if cannibalism is a feature that people want. You can't kill your friends, but if they die you may be able to loot their corpse for "[player name]'s flesh" which can be cooked. If anybody would want this feature, please let me know.

I've also added some fruits to the game that players will be able to forage, eat, and grow if they so desire. These are currently the only fruit in the game but I'm planning on a rather large amount. Sure, some of these wouldn't grow on a tropical island but I'm not aiming for super realism. The fruits go from left to right, and they are - Apple, Grapes, Orange, Lemon and Watermelon. Each of the fruits have their own hunger restoring benefits. With Lemon being the least, and Watermelon being the best.

You also don't need to cook them, so that's a plus. They're stack-able too so there's no worry of filling up inventory space. You can essentially walk around with x200 apples and be content, even though it's not recommended. You don't want to be weighed down while a Jaguar chases you.

I mentioned that players can craft aesthetic gear that they can't lose upon death because these won't be easy to make, and it could frustrate players having to gather all those supplies again. These are just but a few of the items that players can craft to diffirentiate themselves from their friends, or to just look snazzy.

And yes, all aesthetic items are head-gear. In the image above we have from left-to-right: Bandana, Wizard Hat, Headphones and Monocle.

My goal is to have at-least 100 of these items that players can make. Each of them difficult, yet rewarding to create.

One of the first animals in the game under the reptile category. The Tortoise. These guys will mainly be found around beaches, and near the ocean and will have multiple uses yet are quite rare to find. Killing them causes them to drop Tortoise Meat, Tortoise Shell, and Tortoise Bones. The meat can be used for eating purposes, and is one of the best meats to eat for restoring health + hunger. Eating it raw has a 75% chance of food poisoning.

The Tortoise Shell has two purposes. It can be crafted into body armor that protects the player from most forms of damage, and is one of the best pieces of "armor" in the game. Or, it can be used to craft a "Shell Pot" which has a 80% chance of cooking all meat perfectly.

The Tortoise Bones only have one use and that's for making bone shafts, which are used to make arrows. Bone shafts are lighter than wooden shafts, and deal more damage than normal arrows.

Thanks for all your support, and I hope people are actually interested in this game and its concept!
- Justin Ross (Manio31)
Project Lead/Everything of Islands