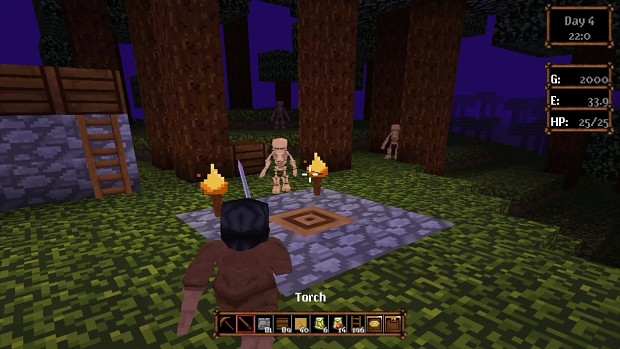 Muspell is a 3D multiplayer sandbox RPG, the core mechanics of the game are a mix of Minecraft, Stardew Valley and Diablo.

Like in the famous block building game aforementioned you can freely place or remove blocks and build the town/fortress you like. There is no craft however, you’ll have to buy furnitures, tools and special blocks from merchants that spawn every morning, randomly near your initial warp gate.

The day/night cycle is very important in the game, you can work on farming chores by day then sell crops to get some gold, but your stamina gauge is limited like in farming games. Planting, mining, fighting will consume stamina and you will have to get some rest when night falls.

Exploration and fighting are a central gameplay mechanic too. The further you get from your warp, the harder the monsters will be. As long as you’re near a warp gate and in light, monsters won’t spawn to attack you, but if you go on adventure far away from home think about settling a campfire at nightfall. Bashing mobs give gold and epic loot, obviously.

There is a leveling system when you beat mobs, so you can equip better stuff and explore even further (or deeper underground). Every new level you will be granted 5 points you can freely distribute in your stats (did I mention I am a Diablo fan?). Skills and spells are in the roadmap. Some examples of magic abilities I’m thinking of: flying, climbing, create magic bridges, teleport, infinite stamina, create tunnels, explode stuff, ...

Multiplayer is already functional and available as both network and local using gamepads. Up to four players can play on the same machine using split screen. Even if it is not necessary to add local coop this is a feature I particularly appreciate in games as I love playing couch coop games with my wife and young kids (4 of them!). I’ve planned to add a dedicated server option and you can play freely on a LAN or over Internet, no account is mandatory.

The development of Muspell has started a long time ago mostly part time, but I decided in early January 2020 to scope down the project and aim for an early access in Q2 2020 on Steam.

The engine is built by myself using C++ and GL, there are no fancy shaders or jaw dropping FX as I try to focus on gameplay and having fun in multiplayer. Actually Muspell runs on Windows and Mac, but I have other platforms in mind, there are no heavy dependencies except SDL2.