Introducing Patterna, a logic puzzle game inspired by HexCells. It features a set of hand crafted levels, an infinite supply of procedurally generated levels, and a level editor to build your own puzzles! Now on Steam Greenlight!

allow me to give you an impression of my current project: Patterna, a logic puzzle game inspired by HexCells. Each level of the game consists of a network of nodes (a graph). It is your job to figure out which of these nodes are part of the pattern and which are not. To help you achieve this goal, each node may carry information that uses reachability, distance, or color to constrain which nodes are pattern nodes. Correctly classifying a node may reveal new information which in turn will help to solve the puzzle.

Please consider voting on the game's Steam Greenlight page. You can download a demo version of the game here on IndieDB or at Itch.io. It includes the tutorial and three more difficult premade levels.

How to play the game:

Each level of the game consists of nodes. Each node is in one of three states: Good, bad, or unknown. Think Minesweeper: Good nodes are clear, bad nodes contain mines, unknown nodes are still to be classified.

The goal is to classify all unknown nodes and reveal the pattern (hence the name).

The nodes are not isolated from each other, but form a network (a graph): 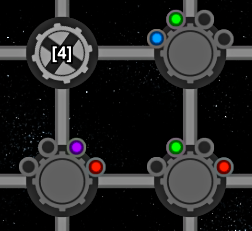 Here are a four nodes. The grey lines are connections (edges) between the nodes. This allows us to talk about the distance of nodes between each other, and about reachability: A node is reachable from another node if there is a sequence of connections that leads from one node to another. The smallest such number of connections defines their distance.

There are three different kinds of information that help the player to classify nodes:

Radius information specifies how many of the unknown nodes reachable in a given number of steps from the node with the information are part of the pattern (that is, are pattern nodes). For example, this node shows two blue rings, which means it refers to all nodes reachable from that node in at most 2 steps, and has a white two on it, which means that of the unknown nodes it is referring to, 2 are in the pattern.

Color information tells you how many unknown nodes of a given color are in the pattern. Note that unknown nodes have color orbs that light up if the node is in the region associated to that specific color. In this case, the green three tells you that of the unknown nodes with a green light, exactly 3 are part of the pattern.

Component information tells you how many nodes this node still needs to connect to: A node is connected to this node if it is reachable from this node, with the restriction that your path may only use pattern nodes. Connected nodes form components. Here are two examples: 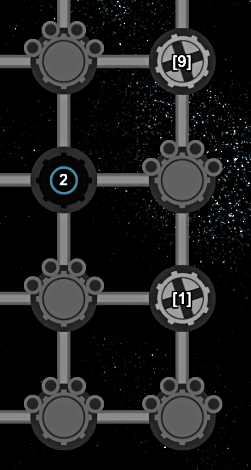 The situation is different here: The top node has a nine on it, the bottom node a one. This means that their components have size 10 and 2, respectively, so they cannot connect. The implication here is then that the node right between them must not be a pattern node. More subtly, there is more that can be derived from the above situation: Focusing on the node with the number one on it, we know that there has to be exactly one other pattern node connected to it. Since it is not the node above it, it has to be one of the two other nodes (to the left or to the bottom of it). Both of these nodes share a common neighbor (the bottom left node), so no matter which of them actually is the pattern node, the bottom left node must not be a pattern node, since otherwise the component size of the node with the 1 on it would be at least 3.

At any time, the game will also give you the total number of pattern nodes that are still unknown, so this is another source of information.

I have skipped over two more advanced features: Directed edges and a variant of radius information (I'll leave the latter out for now). Directed edges can only be used in one direction and have little arrows on them: 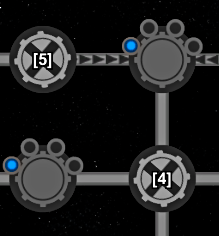 That's it for today, and I think I have covered most of the important concepts. Next time, I might talk about the random level generator, or maybe something else entirely. Thanks for reading!