Neon Chrome is currently on Steam Greenlight so here's an article that should serve as an introduction!

If you haven't heard of Neon Chrome yet it is a ruthless top-down cyberpunk shooter with some rogue-like elements. The game takes place inside an arcology - a massive mega structure. The arcology hosts around a million souls. Its supreme leader - the Overseer - has gone mad. It is up to you to save everyone. 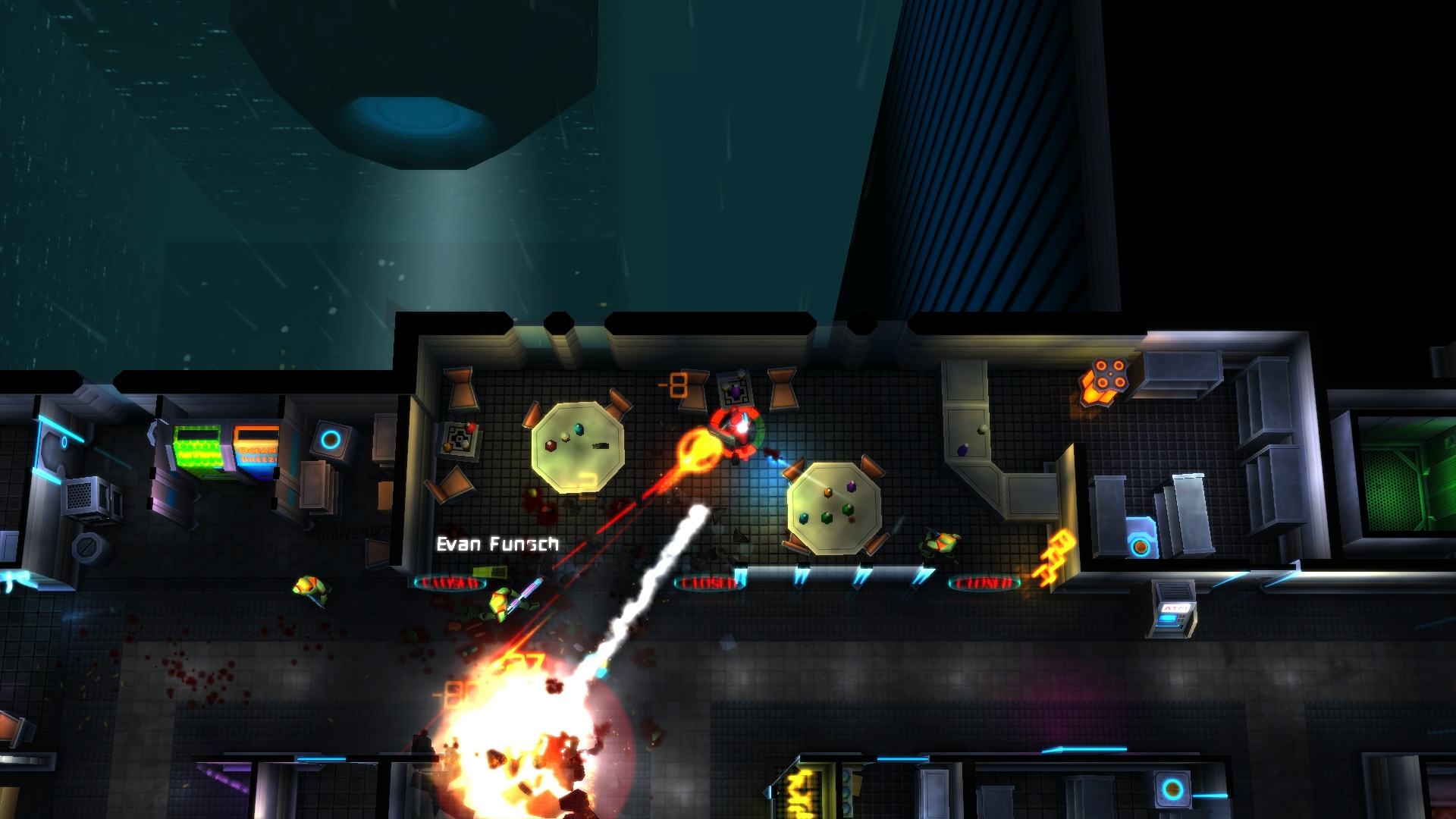 Neon Chrome is about runs: setup, fight, die, repeat. Before each run you'll choose a character with a role, an ability and a weapon. Your role could be hacker, which means you can hack things like terminals or certain lock boxes. As a weapon you could have a laser rifle or maybe an SMG. Your ability could be grenades or maybe a crossbow with explosive bolts. In any case, you can choose a different character before each run. All characters are random combinations of these three factors.

During a run you'll build up this character with enhancements and weapons upgrades. All this in addition to your increasing skills will take you further and further into the arcology and towards the Overseer. In Neon Chrome every death is a new beginning and the path to defeating the Overseer is never the same. Reaching the Overseer the first time will probably take a lot of dying.

The character stats and some other attributes can be upgraded between deaths. This is done with credits you can find during your run.

So, a session of Neon Chrome usually follows a pattern like this: 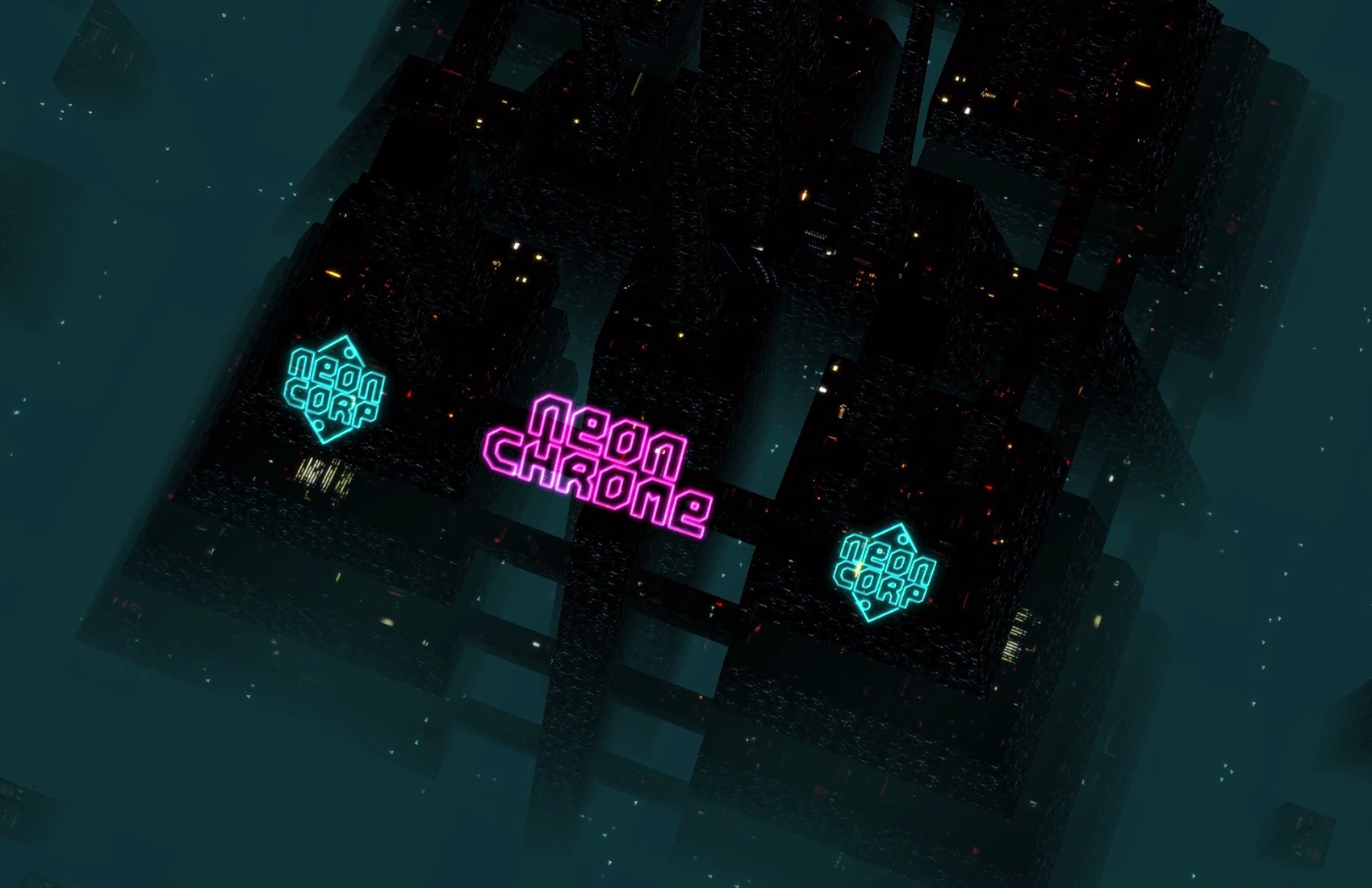 A birds eye view of the arcology which we call Neon Chrome.

The arcology is massive and the security systems built by Armocore are extensive. The security forces number in thousands. The security ranges from security guards armed with pistols to cyborgs with miniguns. The humans are accompanied by robots including small utility robots and hulking weapons platforms. You must fight your way through all of this to stop the Overseer. So, except a challenge! 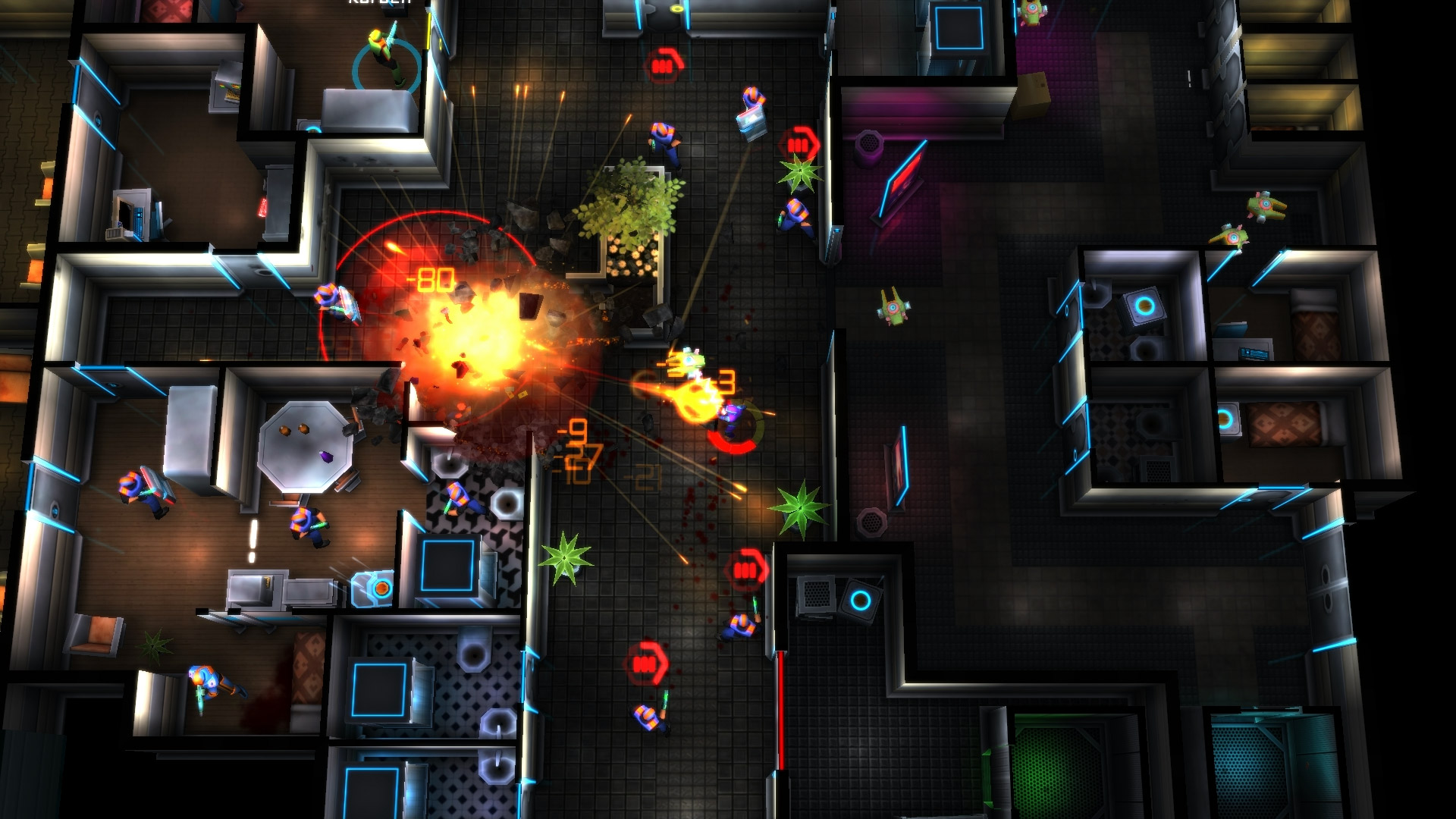 Mayhem inside an arcology!

After each death you can choose another character to control. All of the choices are different so the experience from the character perspective is also different each run. Neon Chrome has local co-op so you can make your friends explode with a carelessly tossed grenades. 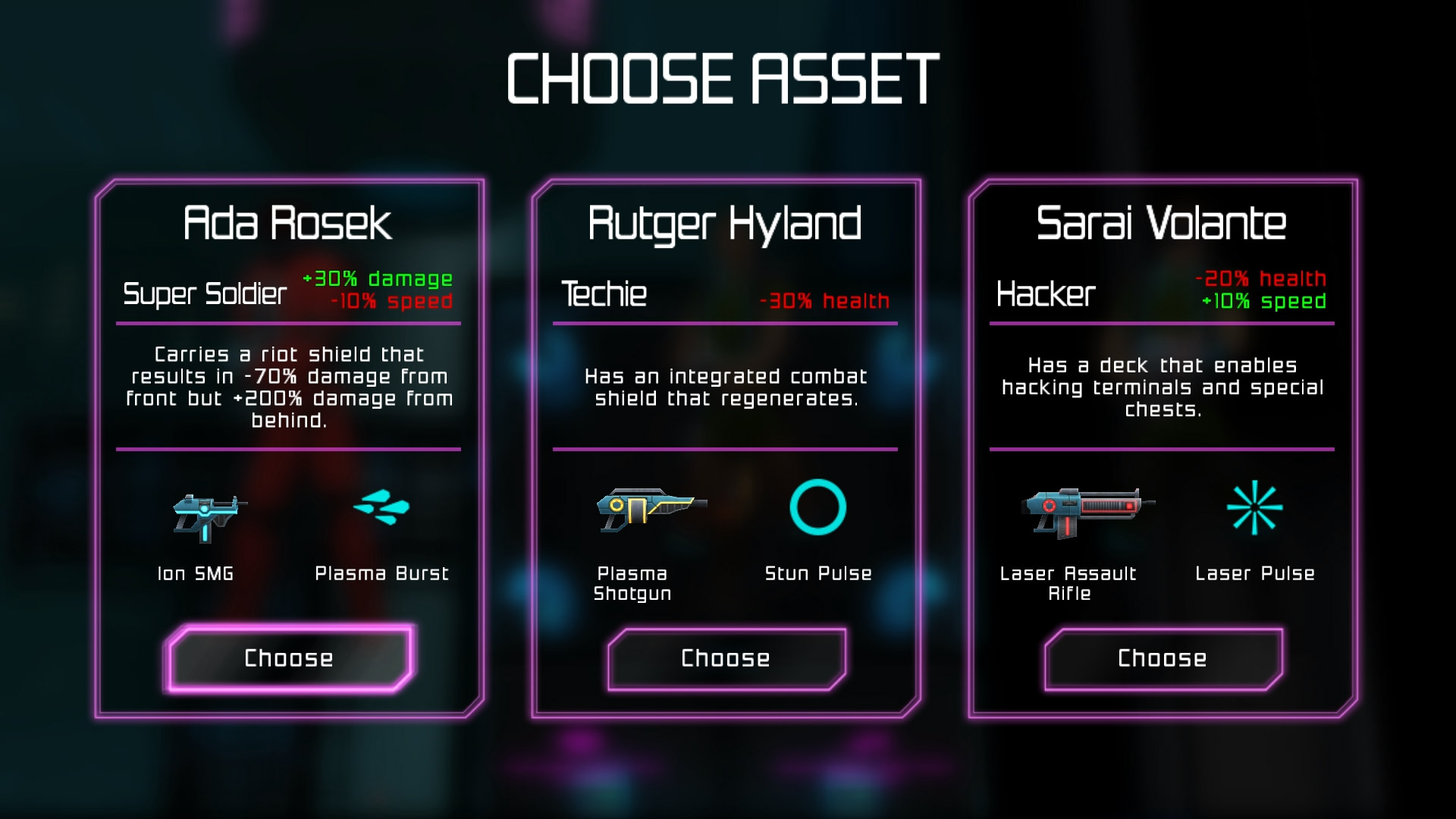 Choose your character before each run. Characters are randomized - choose one from three.

There are three types of levels in Neon Chrome: procedurally generated levels, hand crafted challenges and boss fights. The path to defeating the Overseer is always different and includes all these level types. After winning a boss fight a shortcut usually opens which enables skipping some steps on your path towards the Overseer. 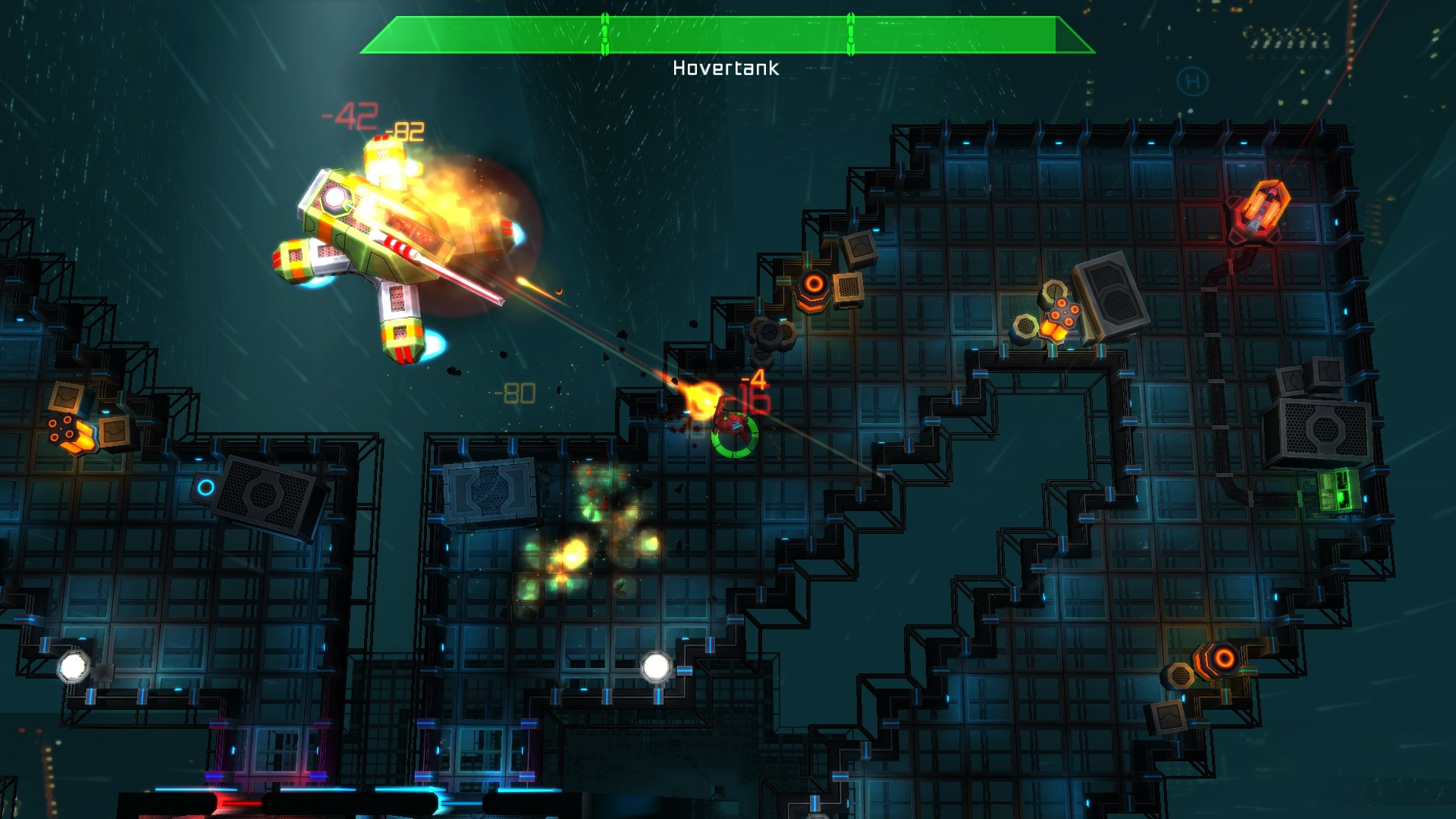 Once in a while you'll encounter a boss

Some of the most interesting things inside the arcology are the Cyberhance Express stations. They offer quick installation of various cybernetic enhancements. Your character has a certain amount of cybernetic slots which are filled with these enhancements. More slots can be bought between runs. 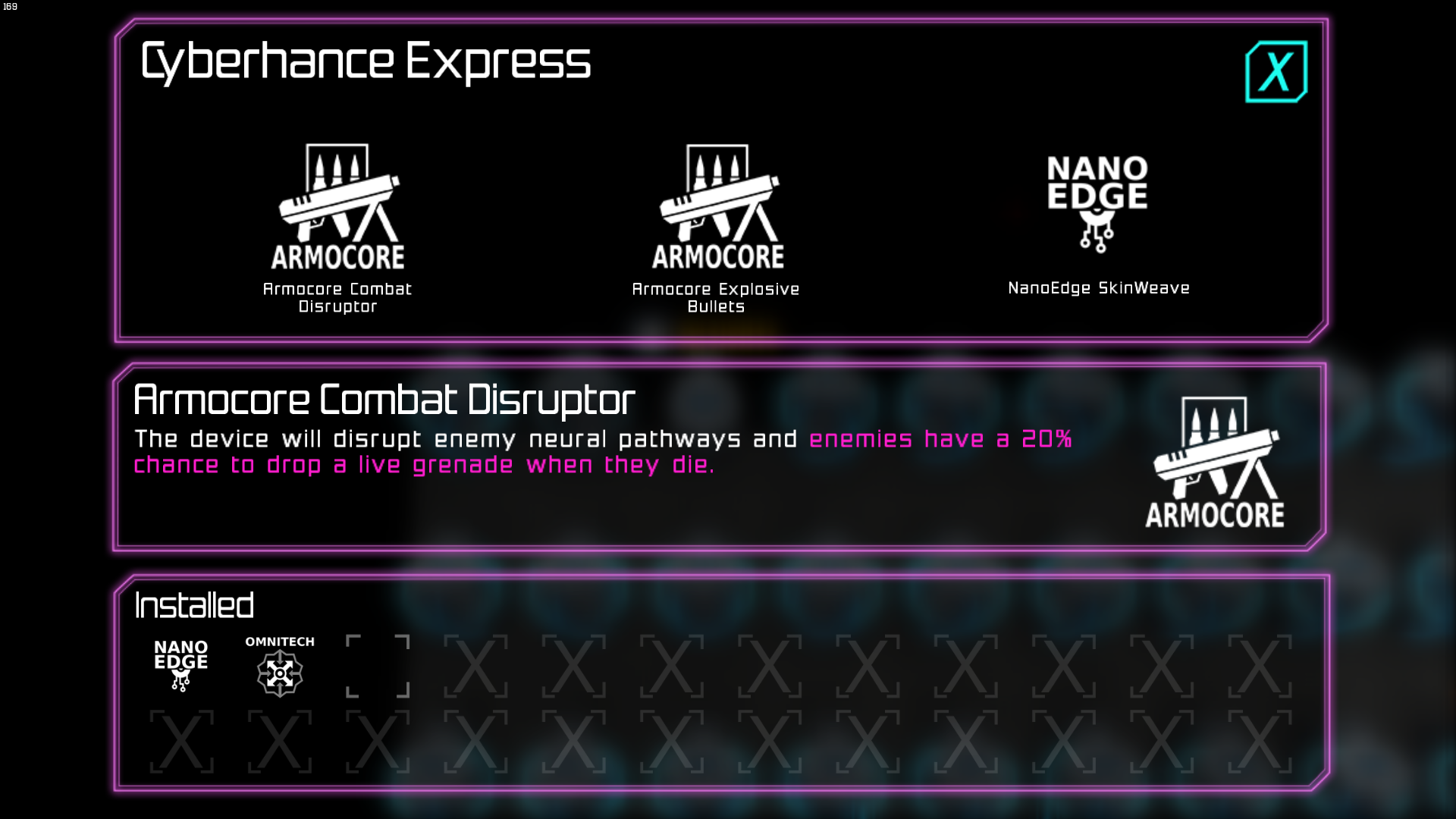 Choose your cybernetic enhancements. If you have no free slots, you can uninstall stuff.

In Neon Chrome you can level whole floors. All weapons can be used to damage stuff but explosives are usually the most effective in destroying things. You can also use this feature to make your own shortcuts to surprise enemies.

It seems I left a couple of weapons upgrade terminals untouched.

So this is Neon Chrome - all questions and comments are welcome! There's also some more information on the website: Neonchromegame.com Remember to sign up for our newsletter to apply for beta access on Steam!