Avant-Garde is a game where you play as an artist in 19th century Paris, create paintings and meet artist such as Van Gogh, Dali and Picasso.

This game is unlike anything you've seen before. It's unique like a Picasso, it's revolutionary like Duchamp - it's Avant-Garde.
But what makes it so unique? I'll answer that with another question: in how many games do you play as an artist in 19th century Paris? The answer is: one, Avant-Garde.

In Avant-Garde, you live the life of an artist. How you live it is up to you: you can be a bohemian artist, drinking in the Cafés and struggling to sell your yet uncomprehended masterpieces, or a hardworking, conservative academic, mass producing venuses and portraits for the bourgeoisie and the State.
The final test of your skills is the Salon: an annual competition that crowns the best paintings of the year. But times are changing, and the Salon is being shaken by the noisy modernists, as is the entire art world. Let's take a look at an overview of the features:

You can befriend artists like Courbet, Bouguereau, Cézanne, Picasso, Van Gogh and other artists of the time - or become their rival. Unfold their storylines as you play and live history like it was happening in front of your eyes. 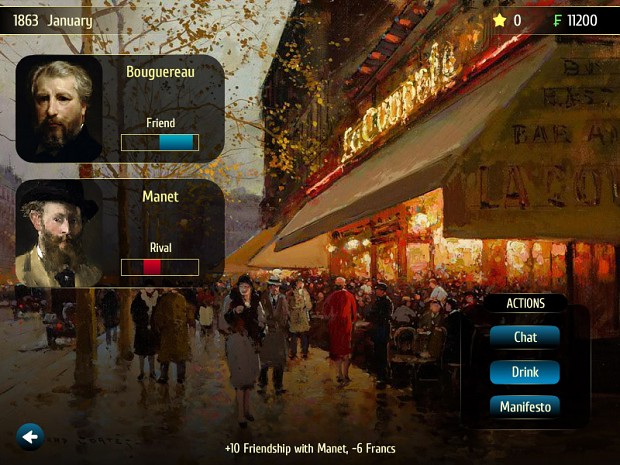 For example, William-Adolphe Bouguereau is a rich and famous artist, but modernism is threatening not only his position but what is most dear to him: beauty - can he hold off the avant-garde and preserve order? 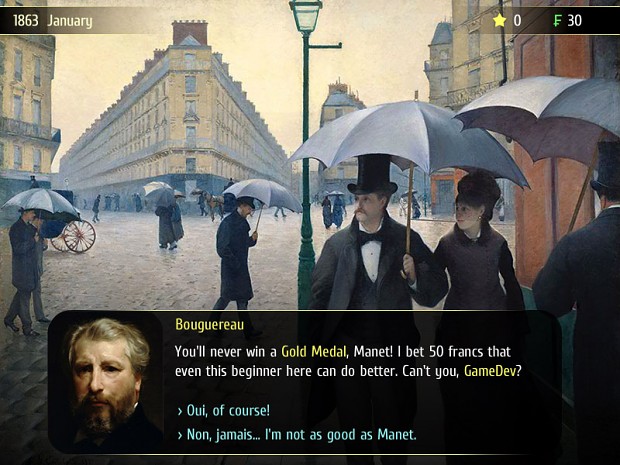 Édouard Manet, while an unconventional painter, is always seeking the approval of the conservative Académie des Beaux-Arts, chiefed by Bouguereau, but is constantly denied and refused - will he achieve his recognition alive?

Gustave Courbet is the most interesting character. An accomplished artist - gold medal winner at the Salon - and self-proclaimed "most arrogant man in the world", he would fail to even make it to the Salon des Refusés, in which nobody was supposed to be refused - a feat that would make him proud. 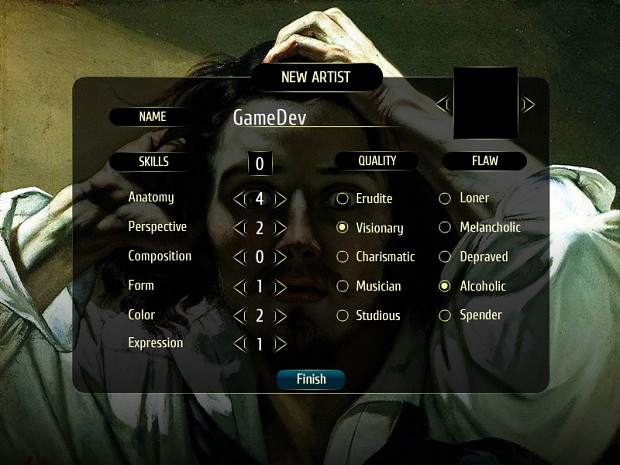 Finally, you can articipate in movements such as Impressionism, Expressionism, Surrealism and many other "isms", or even create your own artistic movement!
The next news will be updates of how the game is progressing. There's a lot left to be done, but I'll leave that for next time. I hope you're as excited about Avant-Garde as I am!
Bye!