After nine months in Early Access, Into the Stars launches today on Steam and GOG. There have been a ton of content additions since the last update and we're proud to announce a Digital Deluxe Edition and roll out an awesome Launch Trailer.

It's hard to believe that it has been nearly 2 years since our first discussions of what would ultimately become Into the Stars. Today we're finally able to share the fruits of those conversations, countless hours and lots of love and support from the indie community.

Starting right now, you can download the Full Release of the game on Steam and GOG. To celebrate, we've just put out a Release Trailer that was a joint collaboration between Alden our Art Director and MetricMinds. Check it out:

As you'll see once you have a chance to play, there have been a ton of changes since the 0.5 Update. In that time we were able to sneak in a few new features before shifting gears to polish and optimizing the game as a whole. Here are a few of the areas we focused on the last few months:

One of the most common requests made during Early Access was for the ability to forego the Ship Customization at the outset of your journey and simply dive into gameplay. We’ve addressed this by adding three Preset Loadouts (Combat, Balanced and Long Haul) that offer distinctly unique approaches to the journey while providing formidable module & resource combinations. Once players have a feel for the trials of space flight they can return to fully Customize their ship. 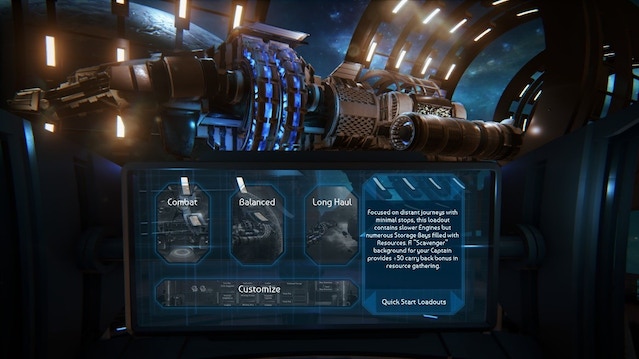 After revamping Shuttle Missions with the 0.5 update by adding meaningful choices and structure to each interaction, we still wanted to push the system forward. That’s why we’ve added custom background art and unique audio environments for each encounter. What’s more, we’ve doubled the amount of Shuttle Mission content in the game by adding 50 Planet and 25 Ship Explorations.

Finally, we added a number of story elements, localization for 6 languages and completely overhauled the User Interface. Steam Achievements, Trading Cards and dozens of enhancements round things out.

Hi Michael - Please send us a DM on Twitter or an email to contact@fugitive-games.com for identity verification.