Many of the features that make Interstellaria an intense gamecame into play the last week. There are many ways to win this game, but also so many ways to die.

The process to get what might seem like a basic mechanic is pretty intense. I like to think of "game mechanics" as a series of code built upon a foundation. That meant there really was so much to do.

First, I had to implement doors

There are a few challenges with doors actually. Opening doors sometimes doesn't register the crewman as touching for a split second slowing the door. I actually fixed it earlier today by making the open animation faster than the close animation so it's barely noticeable.

Then, I had to create an oxygen stat which is cycled through the ship:

The room with a leak loses oxygen at a pretty fast rate. Opening a door causes the adjacent room to the do the same (a little slower). I actually need to redo this as well. The "cycle" feature causes the O2 to either completely compensate for the leak or completely wipe out the oxygen. Ugh. It works for now, but later I'm going to have to readjust this system.

Sucky. That'll cost a fortune to buff out!

I then needed to program crew to die (either by damage, or by O2 loss)

It was kinda fun programming this part. I don't know why. I have problems.

I then spent some time working on navigation. You layout a plot then engage your engines and take off. Random encounters and events will only occur when you're moving

There is a lot to this screen - in fact it's very critical to the plot as well (which I wont go over in this post). Here is what it'll look like when complete 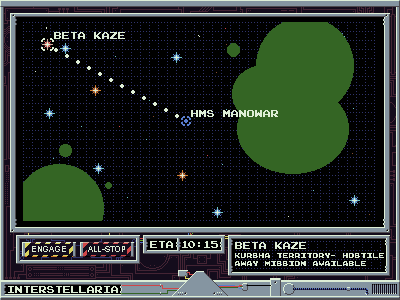 This game will be a gem, sure !