Hello every one. This is FewCode here. I was having a look at this page for a bit and it seemed a bit empty. So I have decided to just talk about the game in a bit of detail.

Interstellar Vengeance was started as a "small" game that was a re-do of an even smaller game I started to make a while ago. (lets call this the "Prototype") It was quite simple. You control a ship, it shoots and you have to try and kill the enemies that were coming from the right and going left. I had a closer look at this game and decided I could make it better and funner. 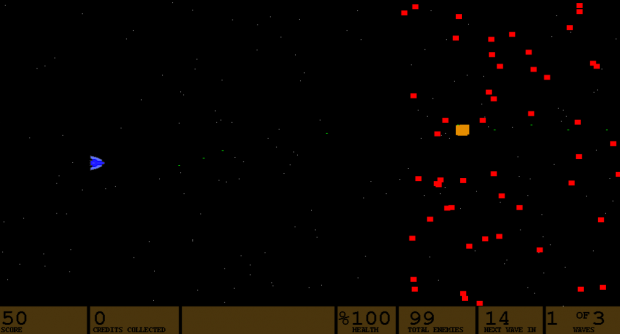 So, I started to make a game with the thought in mind that it was going to be a "fun" and addicting little game, one you can play just a bit of in a small amount of time and not feel like you have lost your day. I also have never or will never think of selling it for cash. (just saying) So its free when the game gets published. At some point, I don't quite remember when, I looked over how much of the game I had made and thought "I could actually publish this if i worked on it a bit harder". So that started my push to make it better.

The game started out with the name "Space Shooter" as a filler name. It also had a small menu and the player was just a green box and was shooting things at the red guys. While this kinda seems like it is now, there is so much more that has been added. Even if it is just behind the scenes. 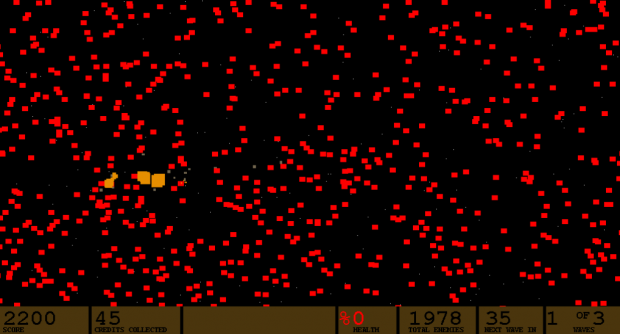 So, let me catch you up on the features of the game so far as of version alpha v1.4. The game starts off at the main menu screen. It has made a profile where it will save all the user data here, such as credits (currency, earned in game, used in store) , controls and scores. On the menu screen you can change settings like volume and player 1 and player 2 controls. You can also go to the game menu from the main menu. Here you can enter the shop, launch a round and change the settings of the next round. In the shop you can buy only a few things now. Tractor beams upgrades.

When a round starts there is 7 seconds before the game actually plays. Then after that wave 1 of 3 starts. Depending on the difficulty the throws enemies at you, that you have to shoot and/or dodge. These enemies always go left until they reach the most left side. Then they are put back on the right to a place that is randomly assigned. (With a little math to make the random work with the flow of the game) then come around again.

When an enemy is destroyed it drops scrap. Scrap can be sucked in by your ship's tractor beam and is turned into credits. If you lose the round by hitting too many enemies you don't get any credits. The win conditions so far are: player 1 must be alive and there must be no scrap or enemies in the game. kind of a bit boring when you get to the end after obliterating the enemy and you have a debris field of scrap left over to clean up. (I will be changing the win condition so you don't have to clean up and so you can win if player 1 dies in multi-player) The field looks cool though, I must say.

Let me sum up the features:

So that's the game so far. I was gonna say where i wanted it to go, but I'm making a wall of text and i don't think anyone will read this. If you want me to do another one on what I wanna see it like later in development, just ask. Thank you for reading, I appreciate it.