After a lot of deliberation we made a big decision - Dream Engines will feature a player-controlled character (a steampunkish mech, actually). This article explains what that means and sheds some light on gameplay.

Citizens, I have some interesting news for you. After a lot of deliberation we made a big decision - Dream Engines will feature a player-controlled character (a steampunkish mech, actually).

This decision brings some significant changes to our vision for the game, and I'd like to tell you a bit more about what it means, and why we came to conclude this is the best option for us.

What does this mean?The main change to the game is in how you players interact with the world. Instead of having a free-roaming camera that you can move wherever you want in an instant, you will interact with the world through a single character. A good reference for such a control scheme is Factorio. The camera angle will remain strategic from above.

The main emphasis remains on building and defending your flying city, but this change adds a whole new set of systems and another purpose for you city's economic and industrial infrastructure - mech customization and progression. You'll need a strong economy to support all the weapons, armor, and upgrade modules your mech needs to survive and further your goals. There's a new crafting system (in addition to the automated resource-production in the city), consumables, active and passive abilities, and much more.

So what's new?Read below to find out a bit more about some of the changes and new stuff we've added since my last update. It's been a while since that update, so there's a lot of new stuff. I'll only write about some of it in this post, and post additional updates in the coming weeks.

City building & economyCity building and economy remain a main focus of the game. There will be no significant changes here, except for the way you interact with the buildings (you approach them instead of clicking on them).

Now, however, the city's economy and production capabilities will have an additional objective - produce mateials to support your mech's growing demands, and in turn your mech will defend the city and acquire the resources it needs to survive and expand. 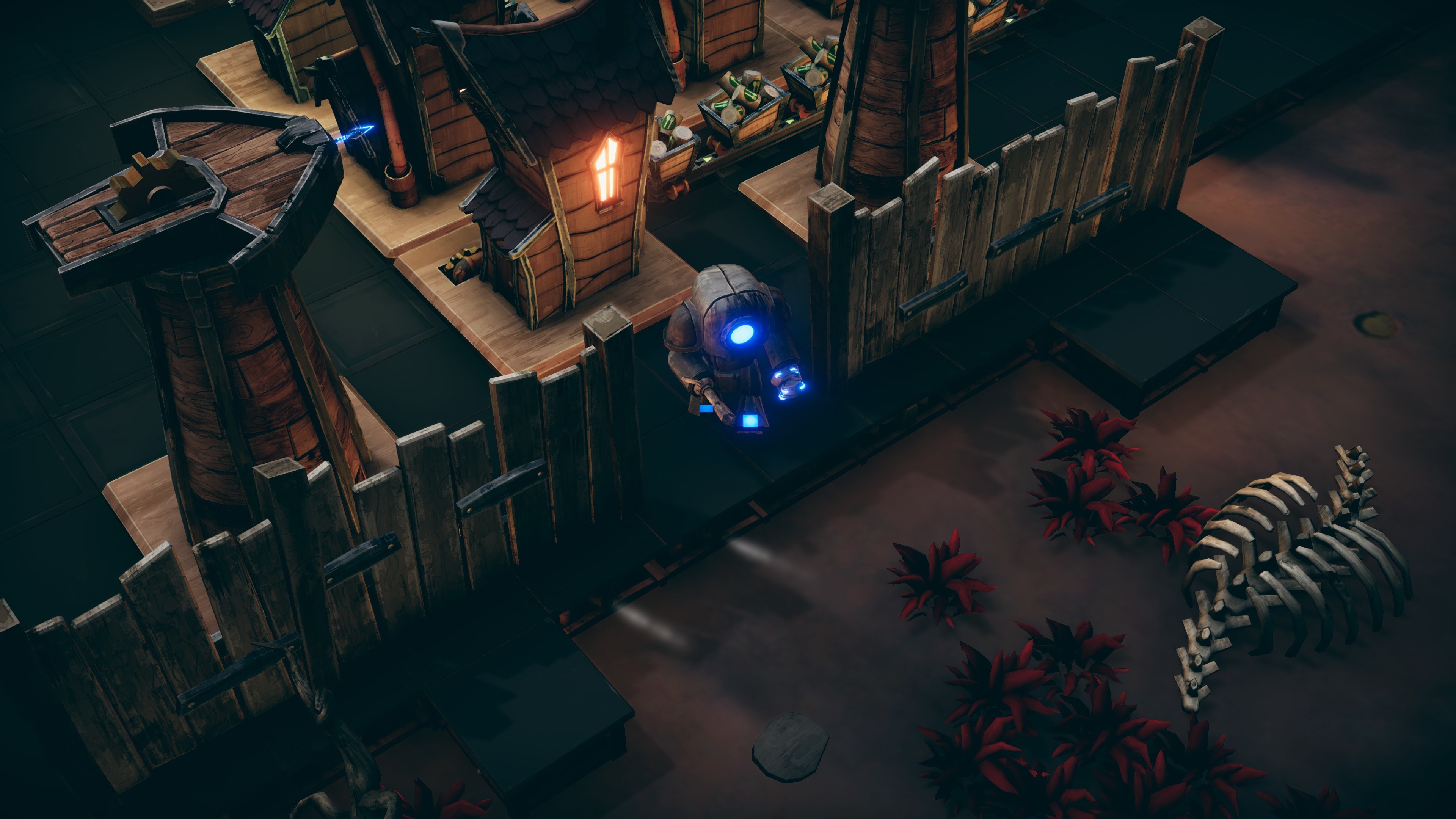 Exploration and resource gatheringThis part of the game will benefit most from the new control scheme. Instead of right clicking and waiting for your units to move, you will be in the shoes of the explorer, you will experience every new discovery as soon as it is discovered, and you will have hands-on control over the movement and survival of your explorer.

We will also be able to add more stuff in the world you can interact with such as scavenging ancient ruins and raiding monster nests.

For now, we've added small resources that you can manually gather, and resource drops when you kill enemies with your mech. The larger resource nodes can be collected by building harvester buildings, but you'll have to guard them while they work, as they attract enemy creatures and will be attacked.

Later down the road you unlock slower, automated harvesters that yield more resources and will deliver them directly to the city. These do not attract enemy attention so you can build them and move on.

CraftingWith the player character having its own inventory, it made sense to add a crafting mechanic, which is more fitting for crafting items in small amounts than the automated production-line of the city. Setting up conveyor-belt-style transportation to produce a single copy of a weapon just doesn't make sense.

So now, city production lines are used mostly to refine resources, ammunition, supplying your citizen needs, energy, research, and other stuff that require continuous production. Consumables & equipment are created through the crafting system using resources from the player character's inventory. 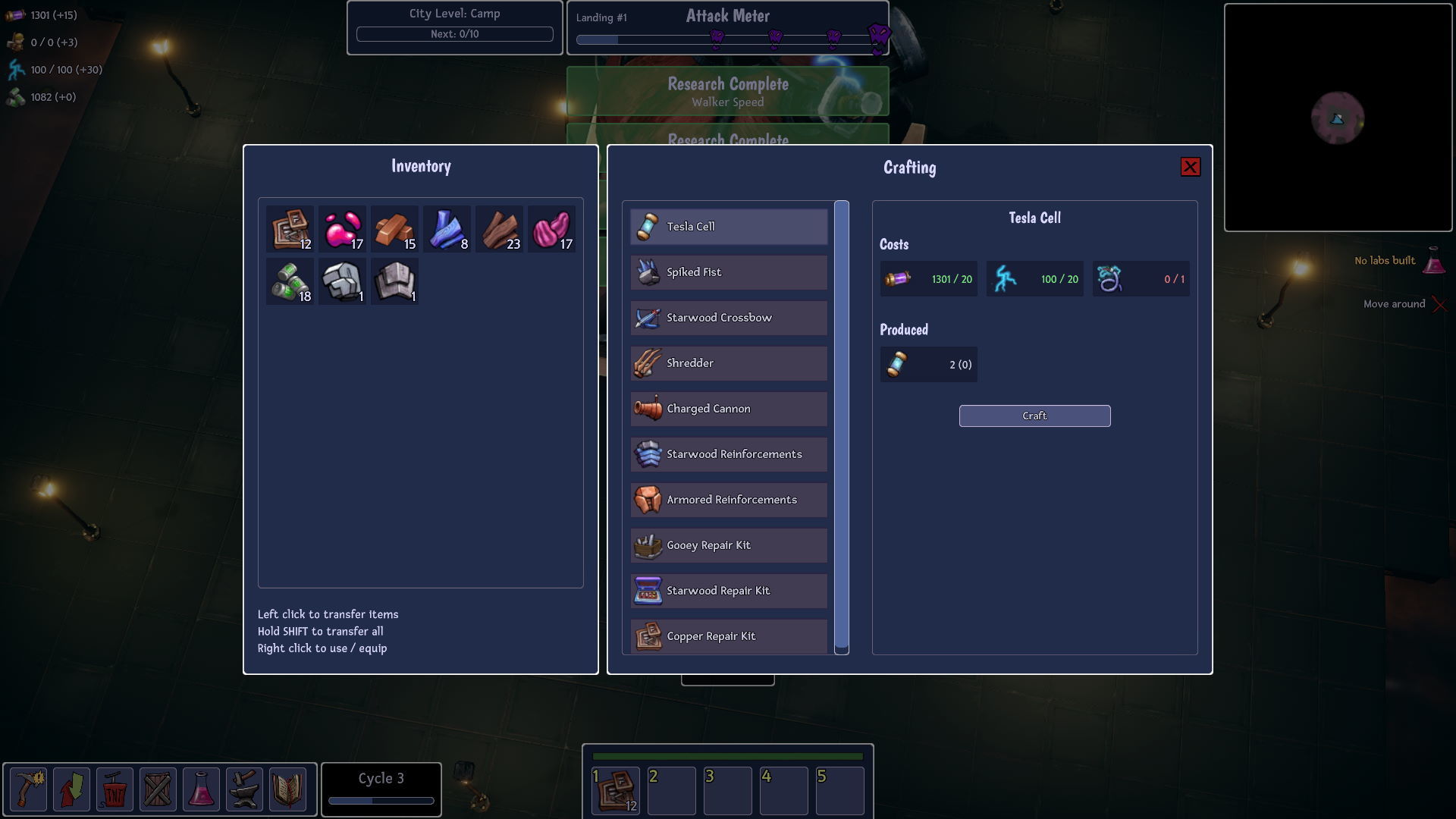 The mech (and later on maybe the city core) will have slots where you can install upgrade modules for unique bonuses. Customize your equipment and modules to fit your play-style. For example, the beserker module increases melee damage by 50% but also increases damage taken by 75%. This module will allow you to explore and clear enemies much faster, at the cost of taking more damage.

This is one of the significant changes due to the new control scheme - there will no longer be player-controlled units (maybe we will add some autonomous units later down the road). You will still be able to build static defenses to protect your city, but you won't have mobile combat units. Instead, your mech will do all the exploration and offensive fighting.

With the new control scheme, we reduced the pacing a bit. Attacks on your base will be a bit less frequent (at least at first, until you are able to set up your defenses), and you will have more time on each map before you are overwhelmed and need to move on. The difficulty increase will also be slower, allowing for more breathing space and more time to get your city in order.

What kind of combat?

This is far from final, we're testing and tweaking and fine-tuning and may completely change it. But, for now, we've decided to have a more survival-feeling, thoughtful combat system, and not hack-n-slash. Player skill and how you fight should play a part, but more in a strategic/tactical way than agility and quick reflexes. We want the combat to be very much dependent on how you prepare, your mech build, and your choices in combat, and less focused on pressing the dodge button at exactly the right moment (so far we didn't even add a dodge button).

Correct use of active abilities, having the right setup for the enemies that you are facing - these should be the main factors. We don't want a player with starter gear to be able to defeat high-tier enemies just because they are super-skilled with lightning reflexes. 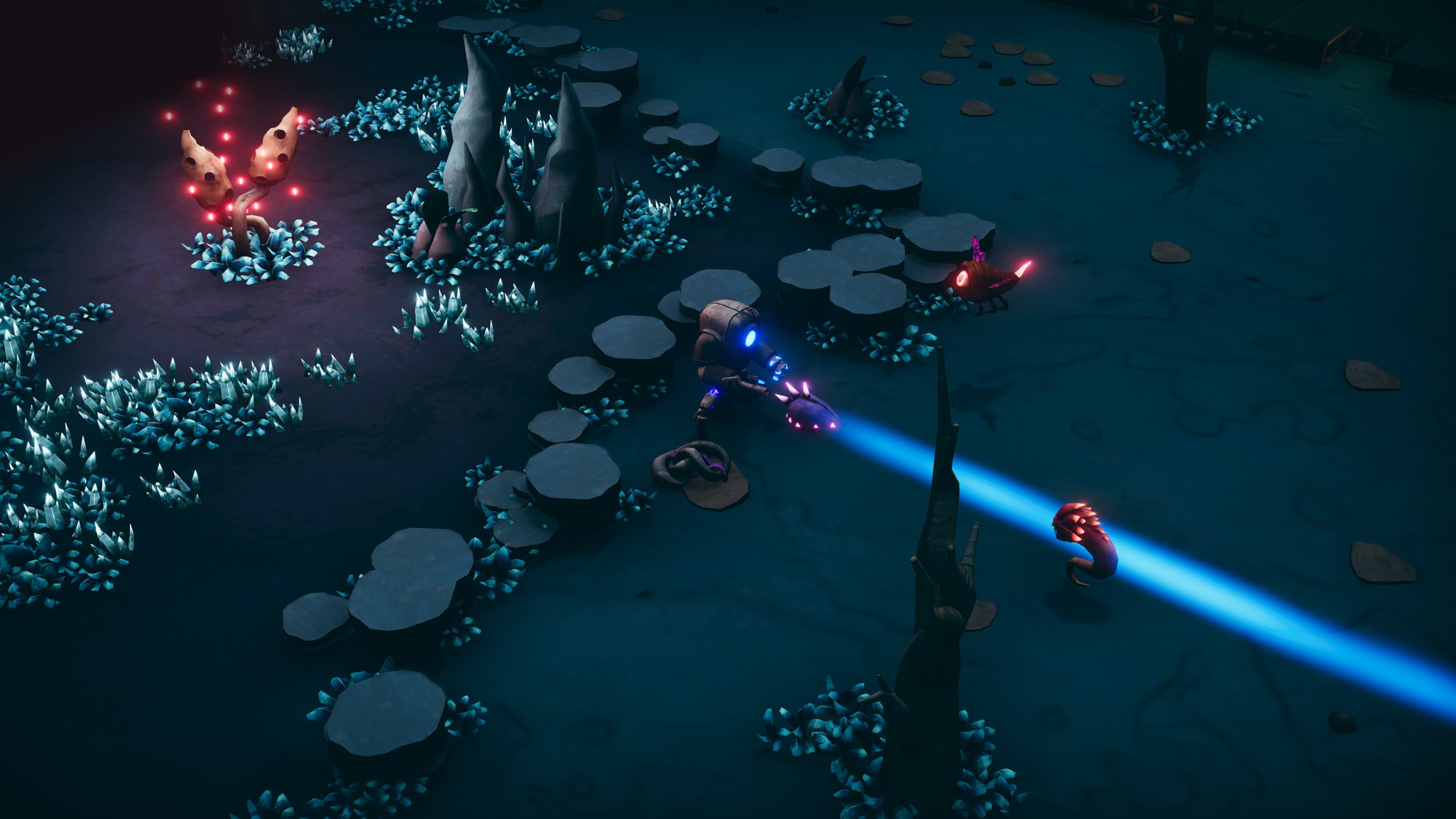 Why make this change? Before I finish with this update, I'd like to share a little of what brought us to the decision of adding a player-controlled character.

The main reason, if I'm honest, was that I was having significant difficulties in getting the main game loop to flow smoothly and feel interesting enough. One of the major advantages of having a mobile city is that you always have new areas to explore, new resources to find, new locations to scavenge. But it also has the drawback of limiting the city's interaction with the environment - your city-building is mostly separate from the map, since the map keeps changing.

So we need to make the most of our advantage, and, unfortunately, an RTS-style control scheme is not the best suited for this. Exploration and scavenging is much more interesting when you control your movement directly, always seeing the new areas that are uncovered, than it is when you just right-click to send a group of units and wait for them to reach.

That was the main driver for this decision, but there were more. Having an upgradable mech adds a lot of interesting choices on how to spend those resources, a significant incentive to make your city more efficient and productive, and a lot of personalization and customization options. You get to directly feel every small improvement you make. 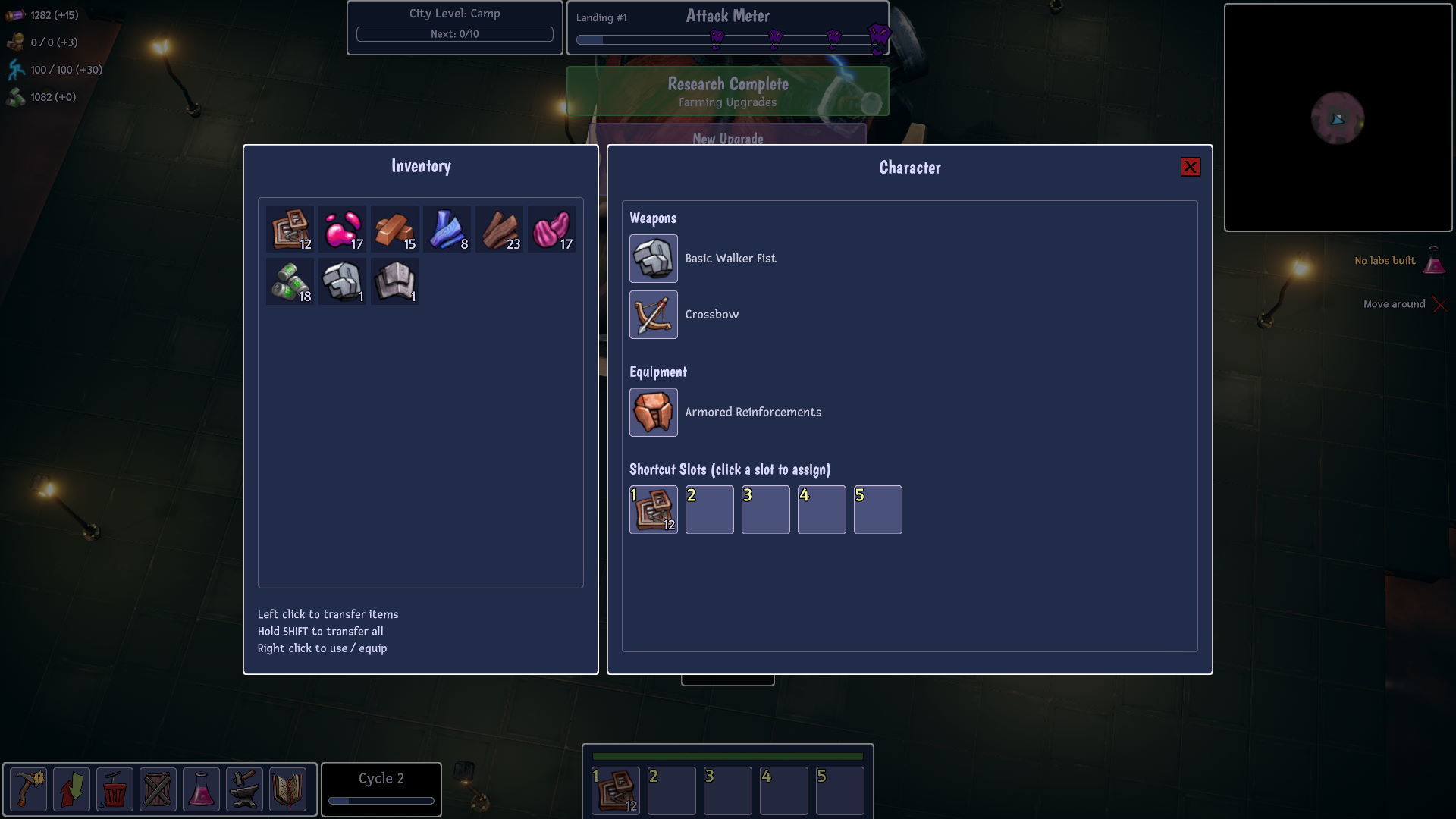 And last but not least, this control scheme opens the game up for the possibility of co-op multiplayer and console porting. Multiple players, each with their own mech, their own inventory, all working together to build and defend the biggest, most powerful flying city out there. Please note that we are not currently working on or planning to launch with multiplayer, but controlling a character definitely makes it easier and more likely down the road. No promises.
What's nextIn the next update I will talk about some of the other stuff that we've added, but this post is already very long. These include building upgrades, skills, a new biome, many new enemy creatures, the research system, and more.

Once again, thank you for reading, and I'd really like to hear your thoughts. Post some comments.