We understand it has been a long wait for you all, but we guarantee this is well worth the wait! We have hit our strides, so much has been happening that we needed the time to collect our thoughts and of course, features to show case to you! We believe in quality over quantity, and we hope you enjoy this update!

In INT’s “July Update” we discussed The Apartment Trailer, which you can find here. The trailer showcased several story and gameplay nodes central to INT:

First, the immersive world of the apartment building is something on which we have worked diligently. From the get-go our first level was designed to plunge you into the Interstellar Civil War being waged between the ACP and UCE. This war has come home for you, and it will spark your hero’s journey from the home-front, to the front-lines, and finally to your vessel of escape.

The particle system and intense, apocalyptic, destruction featured in the video is prevalent throughout the apartment building, as well as the world at large. As you venture through Bastion you will find a world engulfed by war, and you will have one guiding companion throughout all of your fraught travels in Wes, who was featured at the end of the first teaser trailer.

Today’s update concerns our final level of the game: The Starport. The Starport hangars are the only area of the city that remains relatively unscathed by the Interstellar Civil War.

Building the starport, the concluding and fourth level to the game, has been the team’s primary preoccupation since the July update. With the initial Apartment Level, revisited above, The Starport Level bookends the middle two sections of the game: The Street Level (2) and The Tubes (3), which is optional. The Street_Level showcase will be our next major update. It is a massive exterior level, while The Starport is our final massive interior level. 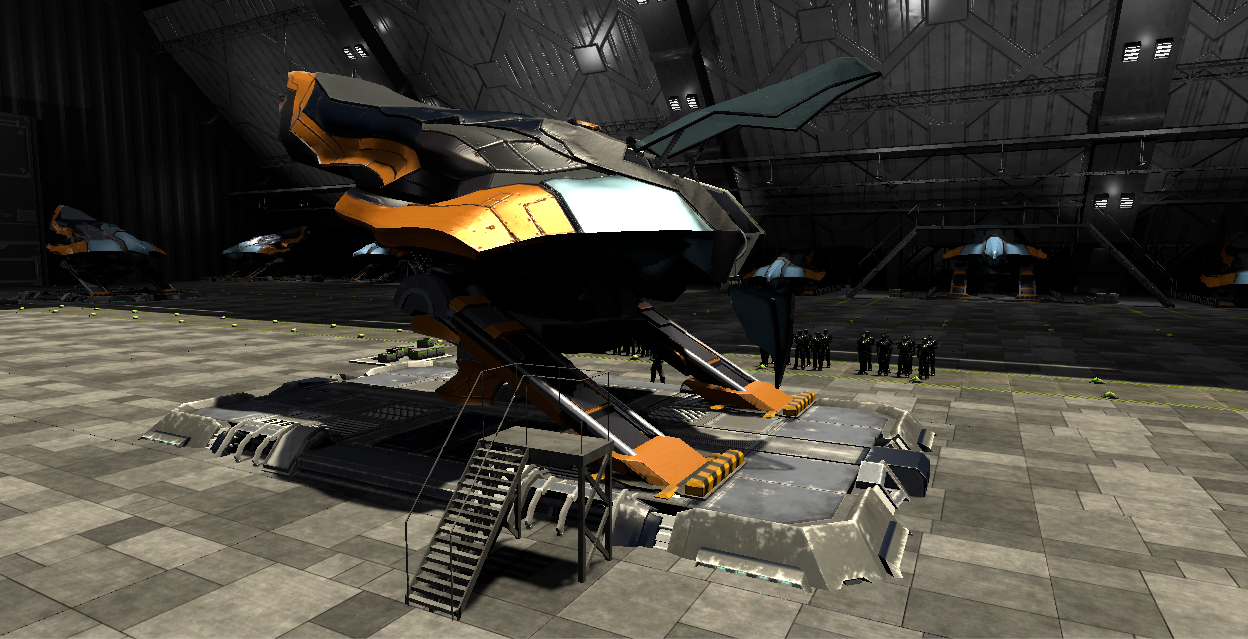 The Starport is your gateway off Bastion. Here you will find ships that you can use to escape the apocalyptic destruction encompassing all of Bastion. In our teaser trailer #2 you will see a ship as it takes off, as well as scores of soldiers.

Above you will see one of the ship models in the game. This model is feature complete. It is a UCE planetary snub-fighter. The fighter is a Scorpion class ship and does not have an Interstellar Drive System (IDS), which means that you cannot use it to escape the planet. But don’t fear; it will be something that you encounter throughout the game world. As an enemy type or mechanical combatant. Its primary goal is to repulse the rebel fighters storming the planet. The ship has a custom loader, and upon takeoff its guns retract, making it a formidable opponent. Here are a few more images of it: 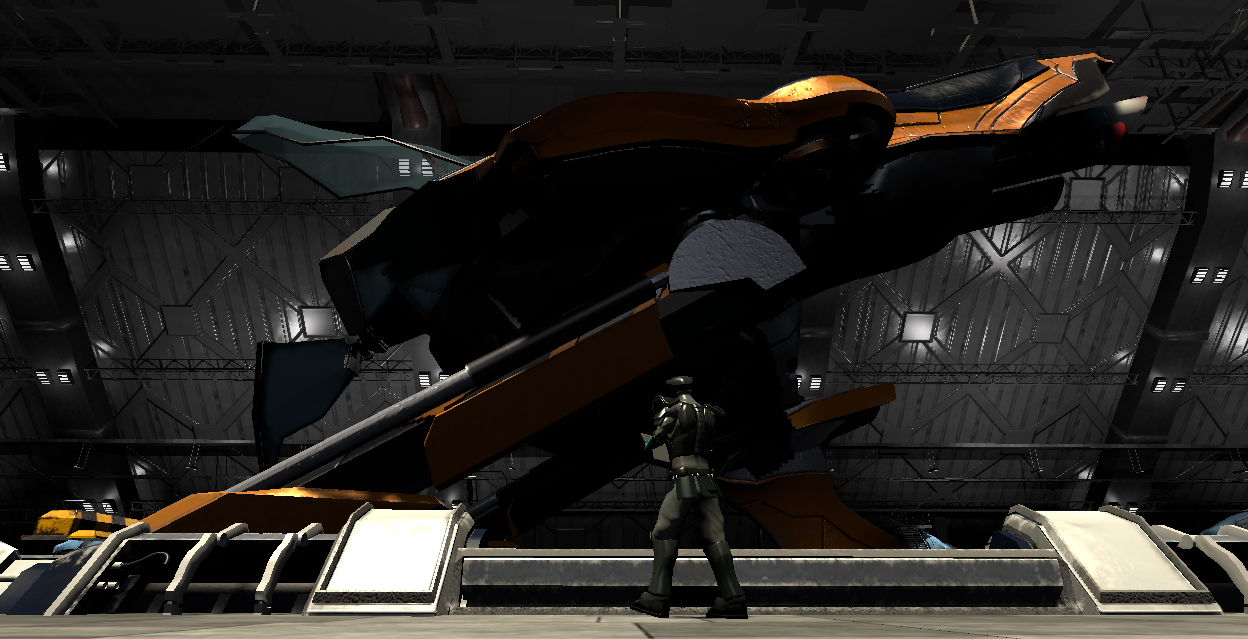 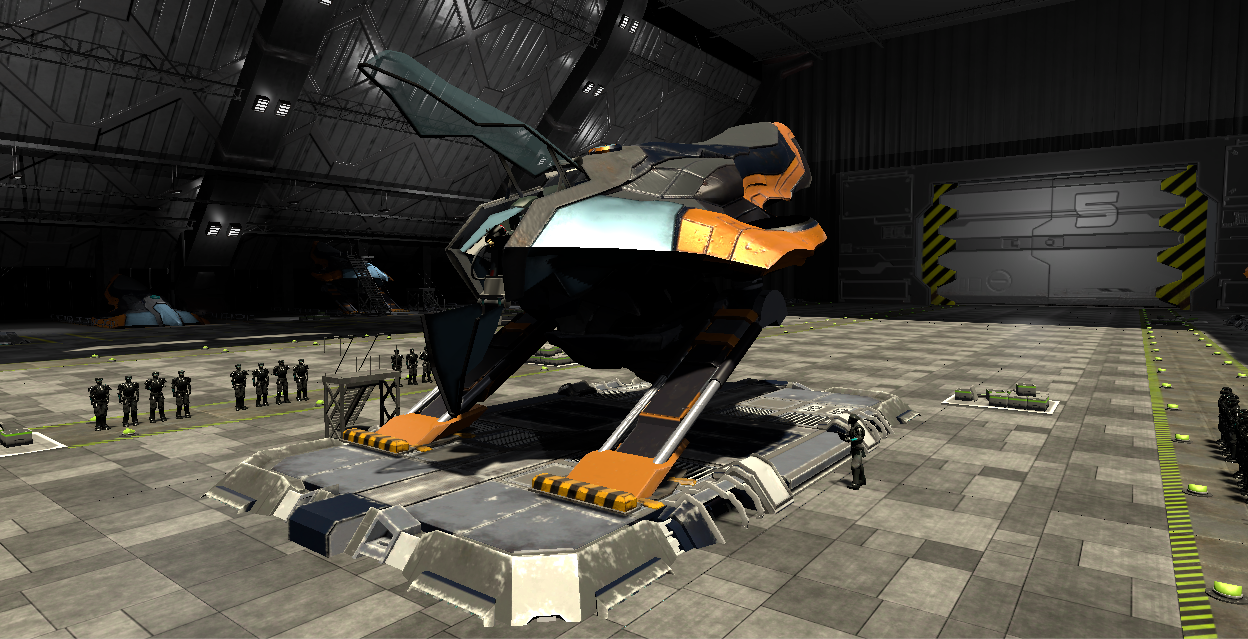 The Starport, however, is a colossal level as you can see from the pictures. This current trailer is just one bay of the entire Starport! 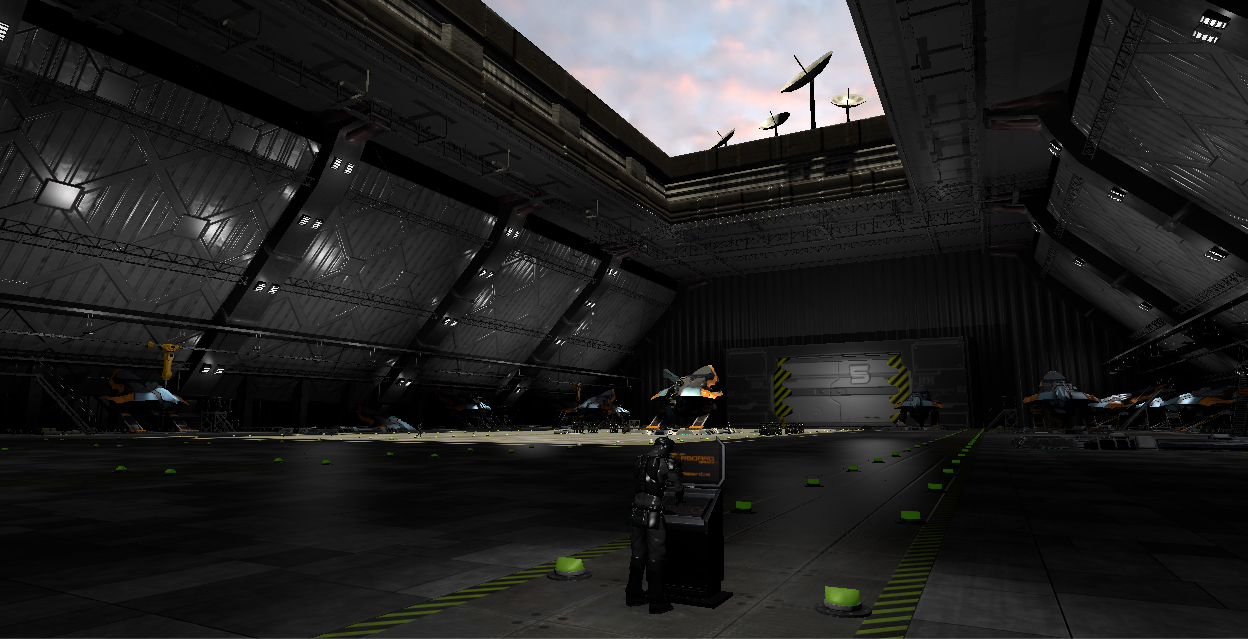 Here you can see the entire scope of the fighter bay where the Scorpion is parked. You can also see the UCE soldier typing on a computer terminal, which proudly displays the name of our company: Starboard Games LLC! 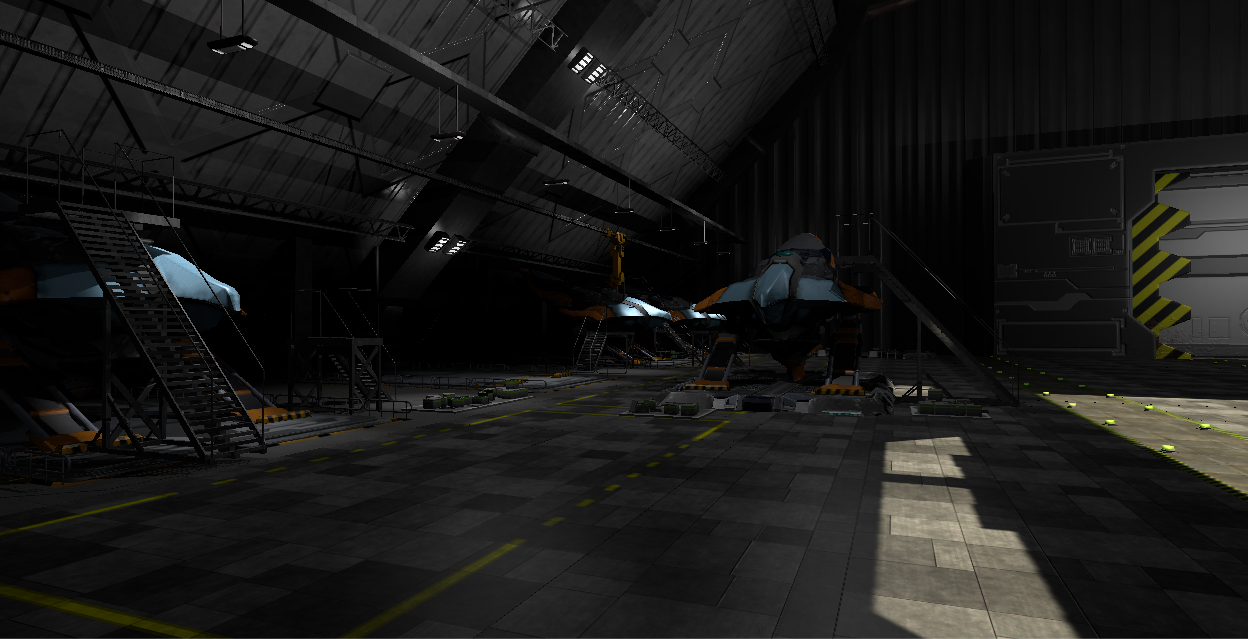 In this shot the Scorpion is being serviced.

As mentioned previously, The Starport is an intact area of the world, but it is also an area the UCE is determined to defend. Here is an up-close look at the UCE soldier type. They will be the bane to your existence if you try to gain unauthorized access to this area of the starport! 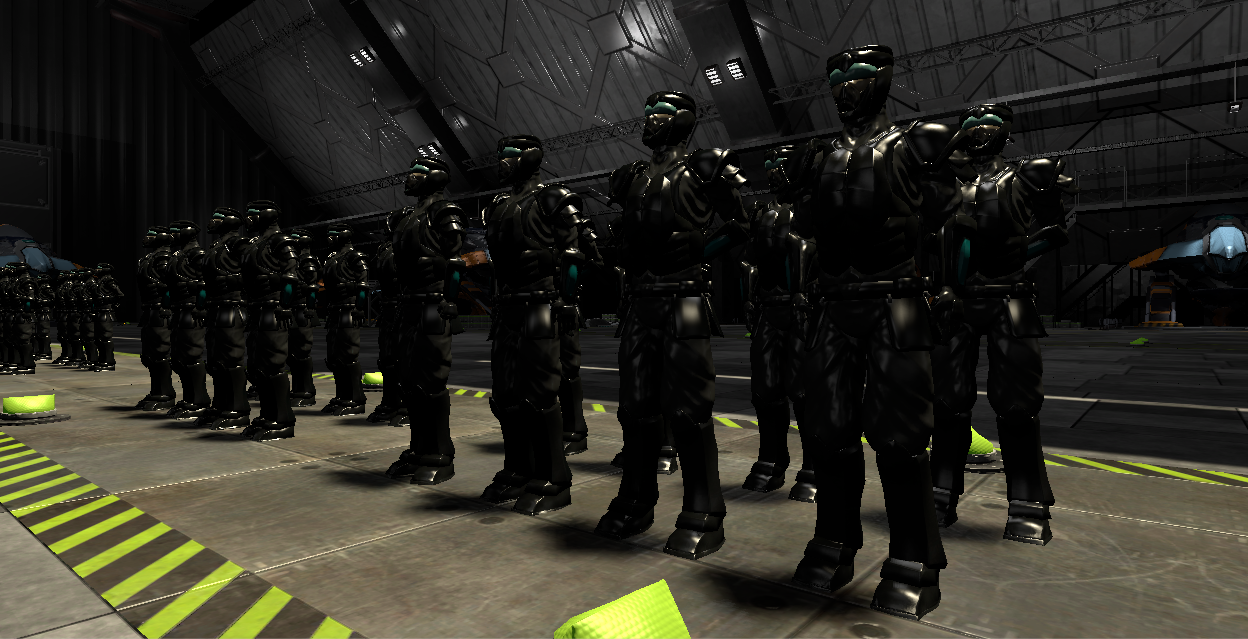 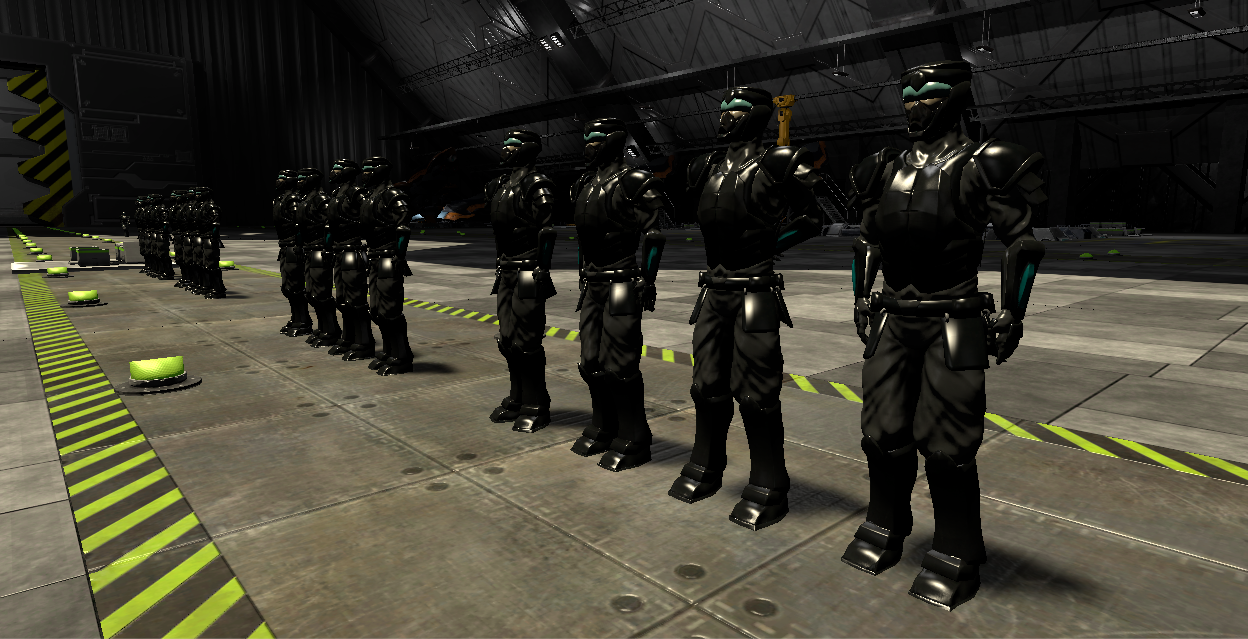 The soldiers are at full attention as they watch the Scorpion ascend to the battle above Bastion. 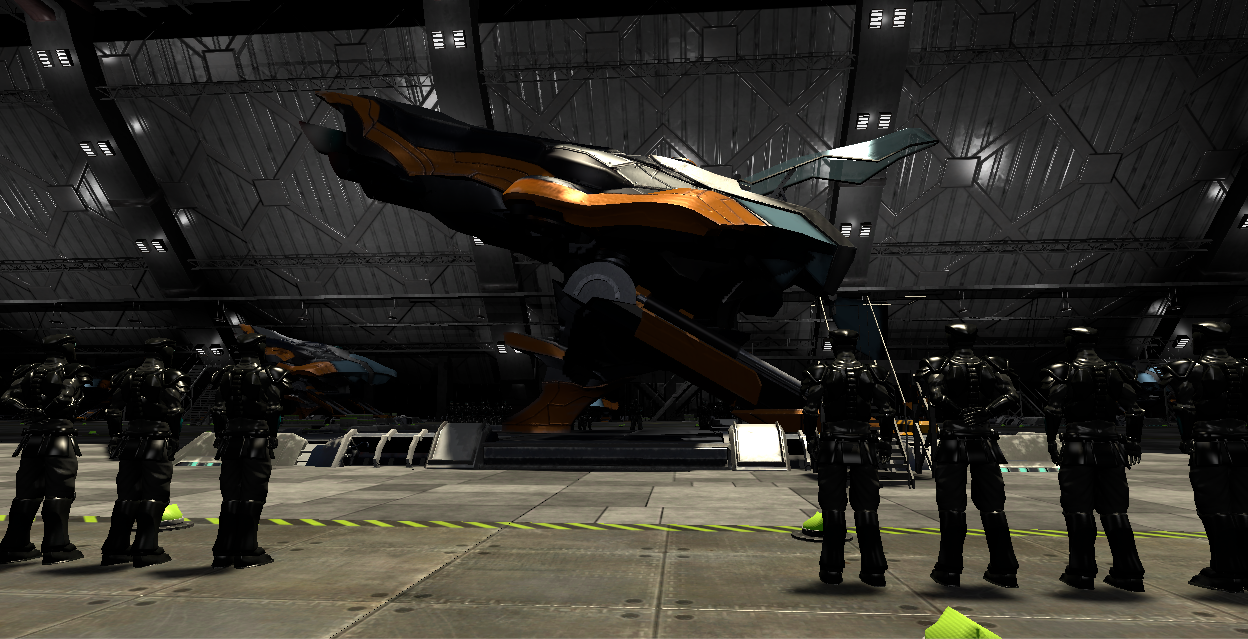 Finally, let me end this part of the blog with an up-close shot of the UCE soldier typing away on theStarboard Games LLC terminal! 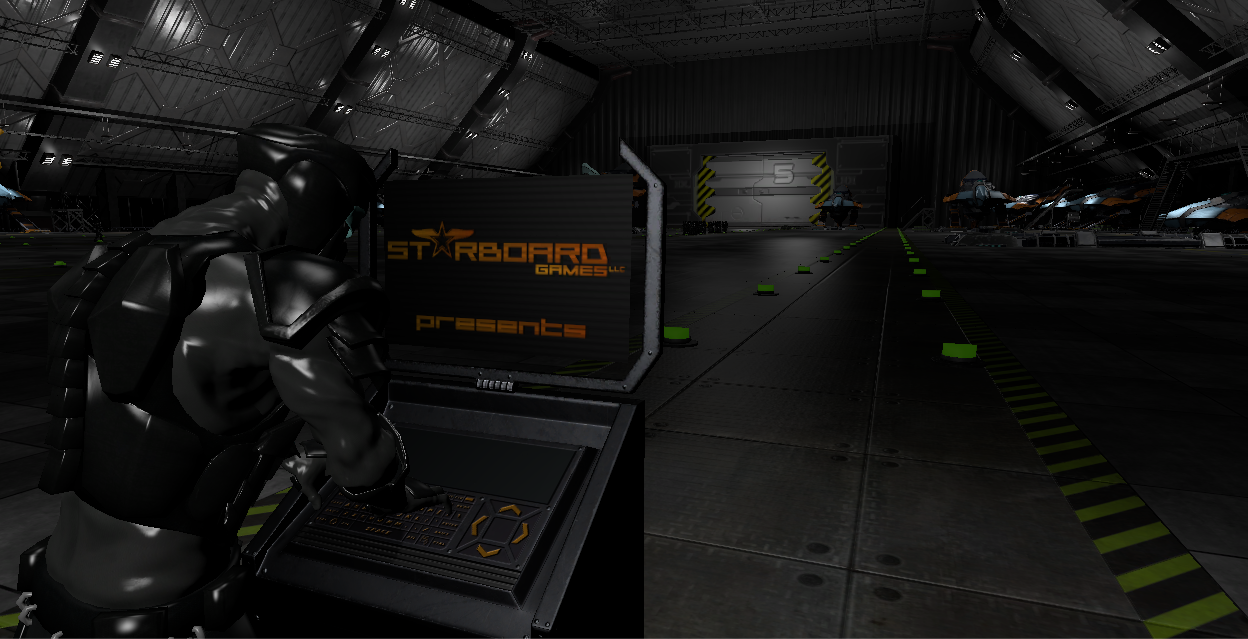 As you can see we have both mechanical and organic enemy types for The Starport, the ultimate demo level for INT. Now, we are hard at work on our next showcase dubbed The Street. This level will be your major introduction to the world of Bastion and the larger INTverse, while The Starport will be where you settle accounts, and hopefully make it off the rock in one piece.

We think the entire Dev Team, led by Matt,’s guidance and vision, did a fantastic job bringing The Starport to life. Additional shout outs go to Dave and Brian for collaborating on the voiceover script, while an additional round of kudos goes to Dave for voicing it. Without Garrett’s soundtrack, the trailer would be incomplete, as well. Further thanks goes out to Nathan for creating the concept art for the UCE soldier, Scorpion and the additional team members and former collaborators: Kevin, Hannah, Mark, Robert Spence, Nabeeg, Bobby, Harrison, and Hugh.

In addition to working on demo levels, team members have been hard at work in other areas, such as launching our podcast Rogue Space, which you can check out here.

In this month’s initial podcast I sit down with PR Lead Jacob, Lead Writer Dave, and Writer Debbie to discuss the state of the game, Halloween and other fun topics. Moreover, we have another creepy story for all of you from the INTverse courtesy of Dave. You can check it out here.

Our Creative Development Director Brian recently was interviewed by Page Bacon, the fine folks that published his INTverse-related eerie tale “The Initiation.” He discusses writing lore and working on theTens Day graphic novel, among other things with the Page Bacon crew, which you can check out here.

As a reminder, we are always looking to add talented individuals to the INT team. Please email John, our HR Lead, for current openings: INT Careers Page. We are especially interested in adding modelers and animators at this time.

In addition to these wonderful updates please check out the newly revitalized Int-game.net website andStarboardgamesllc.com website which are now being vigilantly updated by our web-team: Alex and Michael.

The future is bright for the INT project. We have the strongest team that we have ever had, and just this month we went to our first onsite convention in Chantilly Virginia at Gamers Exchange. In May we will be at Ravencon, and I will be sure to update this list next time we speak with other convention appearances that we plan to make. Our team is passionate, involved, engaged, and determined to see this through. We are working hard every day to bring you, the player, a stellar player-driven RPG experience with both roguelike and traditional RPG features.

Please contact us at the following social media links!